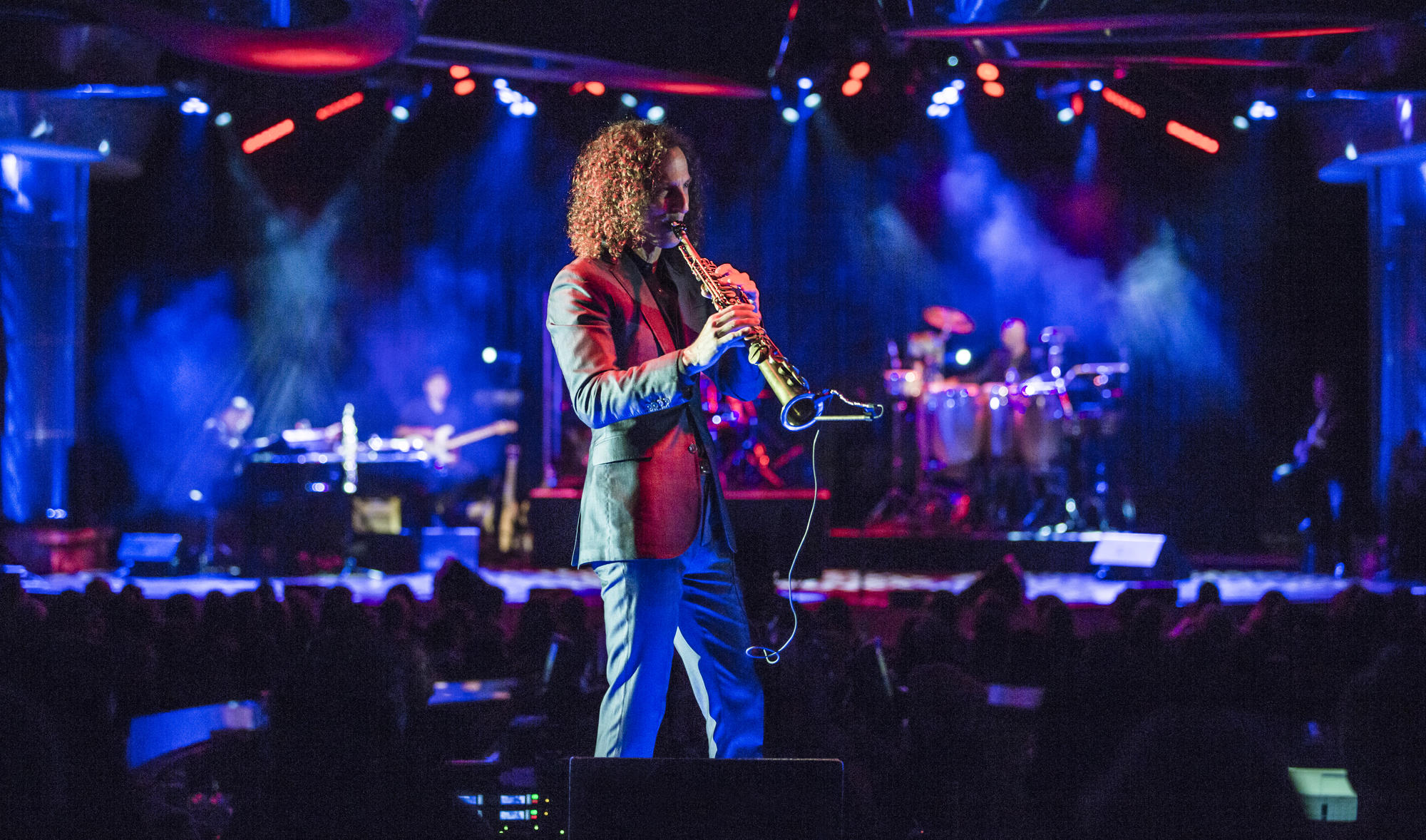 Kenny G plays with Seattle Symphony at Benaroya Hall tonight, but the Seattle-born musician got his start in a local funk band. (Kenny G)

Before people were relaxing and studying to “chillhop” playlists like Rainy Days in Tokyo and Midnight Vibes ..., before the arrival of contemporary “sophisti-pop” revival bands like Surfing, there was Kenny G.

His smooth saxophone melodies, often accompanied by downtempo, steamy beats and funky bass riffs influenced by R&B, have sold more than 75 million records worldwide. His long curly hair, blazers with rolled up sleeves and on-the-beach-at-sunset music videos helped him become synonymous with the ’90s (and the subject of many memes). He’s such a pop culture icon that Kanye West hired him earlier this year to serenade Kim Kardashian for Valentine’s Day.

Most recently he’s been working on a new album, set to release in 2020, titled New Standards, a collection of songs that he says he hopes will be timeless (as if his music isn’t already). It may or may not feature Kanye West, given his recent collaboration.

But tonight Kenny G is home.

Born Kenneth Bruce Gorelick in 1956 in Seattle, Kenny G grew up in Seward Park. While still at Franklin High School, he landed a gig as a sideman for Barry White’s Love Unlimited Orchestra and went on to join Seattle funk band Cold, Bold & Together. (Kenny G features prominently in the documentary Wheedle’s Groove, about Seattle’s early funk and soul scene.) He continued to play with CBT during the 1970s, while “just a kid” attending the University of Washington.

Now the best-selling saxophonist and smooth jazz king joins the Seattle Symphony Orchestra on stage at Benaroya Hall for a one-night-only performance. As expected, the show is virtually sold out.

On tour since September, Kenny G has already played in Wenatchee and Portland, and next he’ll make his way east to Spokane to play a show at the Northern Quest Resort & Casino Indoor Pavilion (Dec. 11).

Crosscut caught up with Kenny G over the phone as he walked through the downtown Seattle hubbub — he says he gets recognized on the street all the time — reminiscing about the Alaskan Way Viaduct and talking about his personal experience with venue discrimination in Seattle.

What are you doing in downtown Seattle right now?

Just walking back to my hotel from a meeting with an attorney.

You haven’t lived in Seattle since 1997. Do you still recognize it when you visit?

Any restaurants you always return to?

Well, I always like Wild Ginger — it's been one of my favorites forever. I like the Pink Door and Barolo and Nishino in Madison Park.

Are the houses you lived in still here?

They are, actually. I drove by my original childhood home last year and it was right there.

What do you really wish was still here?

The viaduct. It's so weird that it’s not there anymore. I mean, I guess it’s great for the people [for whom] the viaduct was blocking their view, and I'm sure for the people living downtown it’s a lot quieter now that there's not a freeway right there. I guess it's a plus all the way around, but for me it was just part of growing up, knowing there was a viaduct and the stuff that happened on the waterfront down there. It's just nostalgia.

How old were you when you started playing with Cold, Bold & Together?

How does a Franklin High student get involved with a funk group?

I had played with Barry White already at that point. I had already established myself as somebody who was a good player. It was a small town and there weren't that many musicians around, so if somebody was a good musician, they would be known.

What did being a member of that band teach you about music?

It was more about the discipline of putting on a show and making sure you knew how to perform. You might be able to perform in your practice room, but can you do it on stage? So it’s more [about] stage presence and those kinds of skills. That helped a lot. When I'm standing on the stage [tonight] at Benaroya Hall, it’s kind of the same thing. I like getting a little nervous because it’s fun to have those feelings and that's what makes you do your best. You’ve gotta feel a little nervous, because that means you really care about it, but you don't want to be so nervous that you can't perform. Those first years with that funk group was just being on stage and knowing you were going to be OK.

Can any elements of your more recent music be traced back to those early Cold, Bold & Together days?

How did growing up near the Central District, the original home of Seattle’s jazz scene, influence your music?

I think going to Franklin High School was a big deal for me because it was more of an interracial school, so I was around a lot of R&B music. That helped form my sense of how I make my melodies, and how I play with a certain feel. So that definitely made a huge difference.

What were the names of the clubs where you first played?

What was it like playing in such a segregated Seattle?

I just look at it as just the way it was. I didn't think twice about it. It bothered me, to a certain amount, but it was just one of those things that's like a fact. We all knew we weren't going to get the gig at Pier 70, and Pier 70 was a real great place to play. They always had all the white bands play there, but none of the Black bands could play. Times are different now, but the live music scene isn't like that in Seattle anymore anyway. It was in the ’70s. It was a shame we couldn't do some of the gigs we would have been really great at, but we just weren't allowed to play in those venues.

So where was the Golden Crown Up?

Westlake Center on Fourth Avenue. That's exactly where it was. In fact, I'm almost walking by that right now while we're talking. So funny.

At MadArt gallery, artist Casey Curran is building a new world after a destructive year. It’s literally and figuratively moving.

Natasha Marin’s multimedia exhibit makes space for “the full range of humanity that is Blackness.”