Although the Keep Washington Working Act went into effect more than six months ago, some sheriffs aren't following it. 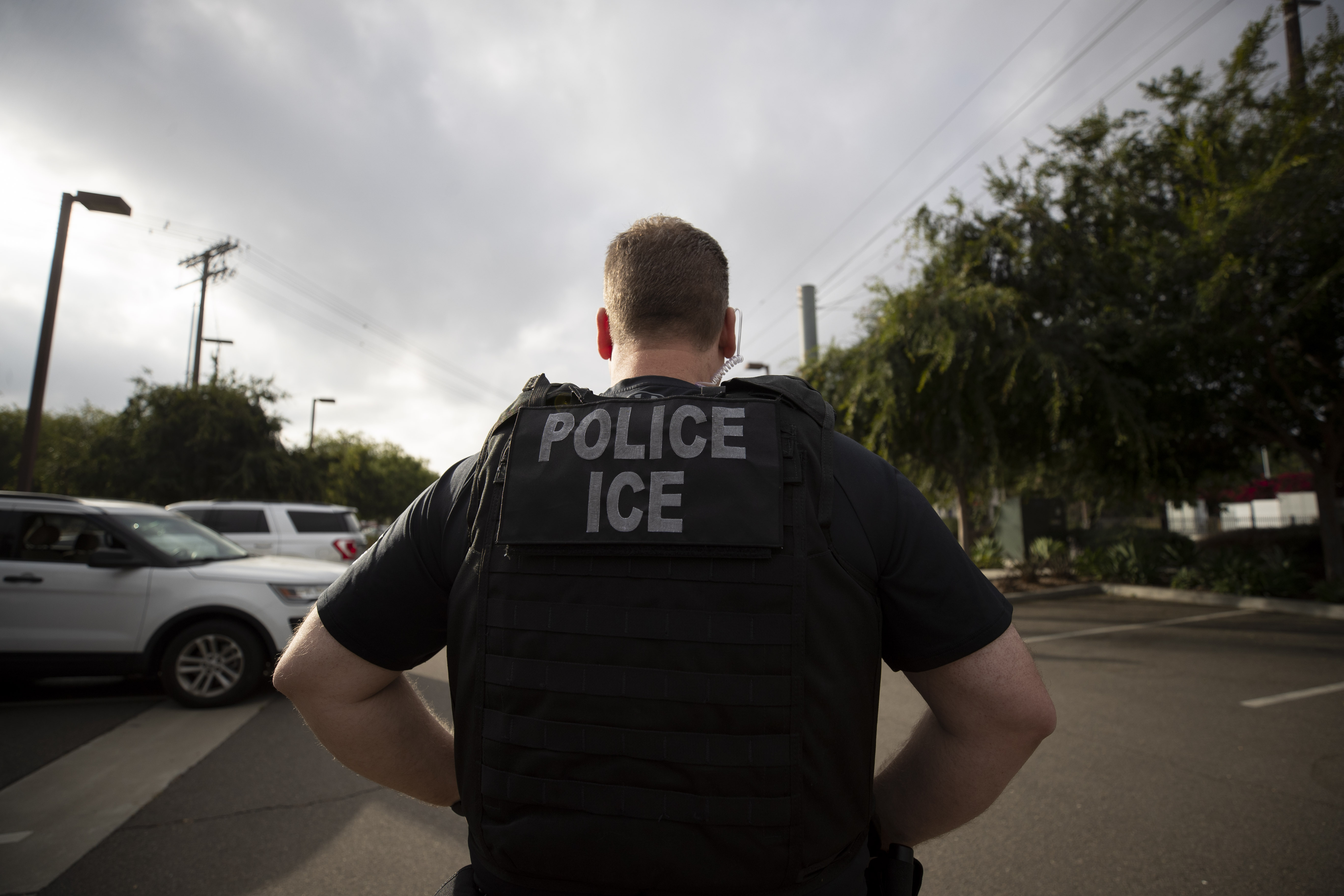 In this July 8, 2019, file photo, a U.S. Immigration and Customs Enforcement (ICE) officer looks on during an operation in Escondido, California. Advocacy groups and unions are pressuring Marriott, MGM and others not to house migrants who have been arrested by ICE agents. But the U.S. government says it sometimes needs bed space, and if hotels don’t help, it might have to split up families. (Gregory Bull/AP)

But instead of releasing her immediately, Okanogan County officials continued to detain Mendoza, even notifying Border Patrol and U.S. Immigration and Customs Enforcement of her pending departure, according to a lawsuit involving her case.

Mendoza, whom federal officials eventually transported to the Northwest ICE Processing Center in Tacoma, isn’t the only immigrant who has faced this predicament. Despite federal court decisions making it clear that state and local officials have no authority to arrest or detain people for immigration purposes, the practice has continued in some areas of Washington state and other parts of the country. Federal courts, such as the U.S. District Court for the Eastern District of Washington, have found the practice violates the U.S. Constitution because it infringes on the Fourth Amendment right to be free from unreasonable seizures.

New state legislation, what’s known as the Keep Washington Working Act, was signed into law by Gov. Jay Inslee in May. It was intended, in part, to reinforce the idea that local law enforcement are prohibited from cooperating with federal immigration officials.

Under the new law, local jails cannot hold people for federal immigration officials based solely on what is sometimes referred to as an “ICE detainer” or an “immigration hold”; authorities instead need to produce a warrant signed by a judge. Border Patrol and ICE are also barred from interviewing inmates without written consent, and the law instructs local officials to abstain from notifying the two agencies when an inmate is released.

But more than six months after the new law went into effect, the legislation is making an uneven impact on jail operations and local officials’ cooperation with federal agents.

In Franklin County, for example, where there is a majority Latino population, Sheriff J.D. Raymond admitted that he allows immigration officials to interview people at the jail. “We don’t obstruct, nor do we necessarily facilitate it,” Raymond said. “That’s between them and the inmate.”

Additionally, Raymond said he notifies federal immigration officials of an inmate's release if an agency asks him to, but he maintained that “we’ve never held ICE detainers for the jail unless they have warrants signed by a judge.”

Over the summer, the Northwest Immigrant Rights Project, the American Civil Liberties Union of Washington and Columbia Legal Services sent letters to Raymond and four other sheriffs after they had expressed hesitation about following the Keep Washington Working Act. The organizations asked the sheriffs whether they intended to follow the new law. Raymond and two others did not respond to the letter, despite a warning that a lack of a response would be taken as an indication that they did not intend to comply with the new law.

“I’m not going to get in the middle of politics. We're just going to do our job and abide by the law,” Raymond said when asked why he had opted not to respond to the letter.

In Spokane, on the other hand, Michael W. Sparber, director of Spokane County Detention Services, made clear in an August memo to ICE and Border Patrol that operations there were changing because of the new legislation.

That notice came despite Spokane County Sheriff Ozzie Knezovich’s declaration on Fox News that he did not plan to follow it, even suggesting that Inslee had committed a crime by signing the legislation. Knezovich also cited the fatal shooting of a Kittitas County sheriff’s deputy earlier this year by an undocumented immigrant as an example of why he believed the new law could be dangerous.

In a response to the advocacy organizations, the county's Senior Deputy Prosecuting Attorney Steven J. Kinn said in a letter that the sheriff’s comments “were a consequence of the sheriff’s frustration with the cynically disingenuous representations with which groups such as your organizations presented local law enforcement as somehow actively involved in the enforcement of the federal immigration laws.”

In Benton County, Scott Souza took over jail operations for the sheriff in October.

“We follow the law here. That’s what we do,” Souza said in response to specific questions about the Keep Washington Working Act.

In Grant County, where there is a large Latino population, immigration lawyers and advocates say it is unclear whether the sheriff, Tom Jones, intends to comply with the new legislation. Grant County has attracted media attention with a significant number of immigration arrests outside courthouses, despite objections from the state Supreme Court, which has noted that such a practice dissuades immigrants from engaging in the justice system. Jones did not respond to repeated requests for comment nor did he reply to the letter advocacy organizations sent him.

In the small town of Republic, Police Chief Loren Culp, who has argued the new sanctuary law encourages immigrants to enter the country illegally, would say only that the city contracts with the Ferry County sheriff for jail services. Ferry County Sheriff Ray Maycumber said he would continue to honor ICE detainers because he sees not doing so as a violation of federal law, though he noted the issue doesn't come up much in an area with approximately 10,000 people.

“I will honor them when the federal law requires me to,“ Maycumber said.

Maycumber expressed frustration with what he described as state and federal officials being at odds with one another. “No matter what, I’m going to piss off someone,” he said. Maycumber also said he didn't want to release a dangerous person back into the community.

“I’m going to do what is going to serve my community the best,” he said.

Alejandro Sanchez, who works in Inslee’s office helping to develop immigration policies, said that although he might hear a complaint from an immigration advocate from time to time, he is not closely monitoring whether local officials are following the Keep Washington Working Act, nor are there consequences for not abiding by the law built into the legislation.

In May, however, the state’s Attorney General's Office is expected to issue guidance with regard to the Keep Washington Working Act. Some immigration advocates point out that the model policies released next spring could help those not already complying with the law to follow it.

At the same time, ICE continues to argue that ICE detainers are an important tool and that not honoring them means setting criminals free.

“Under federal law, ICE has the authority to lodge immigration detainers with law enforcement partners who have custody of individuals arrested on criminal charges and who ICE has probable cause to believe are removable aliens,” Tanya Roman, a spokesperson for the agency in the Pacific Northwest, argued in a statement in response to questions about ICE detainers and the Keep Washington Working Act.

“When law enforcement agencies fail to cooperate with immigration detainers and release serious criminal offenders back into the community, it undermines ICE’s ability to protect public safety and carry out its federal law enforcement responsibilities,” she said.

Roman noted that the federal government does not require a warrant to take custody of anyone violating immigration law.

Roman added that releasing immigrants would result in more arrests at the street level, and a greater likelihood that ICE officers will encounter other undocumented immigrants in the course of their arrests.

Washington state politicians, on the other hand, have accused federal immigration officials of creating a false narrative about undocumented immigrants and crimes.

In October, King County Executive Dow Constantine released a statement in response to a reporter’s inquiry, accusing ICE of “seeking to sow fear and division for political gain.”

“The Trump administration and ICE [have] focused on crimes committed by immigrants, despite a number of studies that show no correlation between either documented or undocumented immigrants and crime,” Constantine said in the statement. “The criminal justice system in King County weighs many factors in determining whether an individual remains in custody or is released. Immigration status is not among them.”

In Okanogan County, where the lawsuit involving Mendoza's detention was filed, Sheriff Tony Hawley said his office began changing its policies after Yakima County, in response to its own legal challenges, stopped honoring ICE detainers earlier this year.

But Hawley said his office will hold someone if a federal immigration official submits what he referred to as a “probable cause” statement, as was the case with Mendoza.

“I’m more than willing to work with them if that’s going to reduce crime rate in my county,” Hawley said.

Enoka Herat, an attorney with the ACLU of Washington, said some local law enforcement personnel could be genuinely confused about what kind of documentation is valid with regard to holds, unaware that under the Keep Washington Working Act only a court order or a warrant issued by a judge will do.

Others, said Matt Adams, an attorney with the Northwest Immigrant Rights Project, will continue trying to find a way around the new law.

“It’s a little like playing whack a mole, when you’re trying to figure out what their approach is to try to get around these rules,” he said.

This article was updated with Sheriff Ray Maycumber's comments.