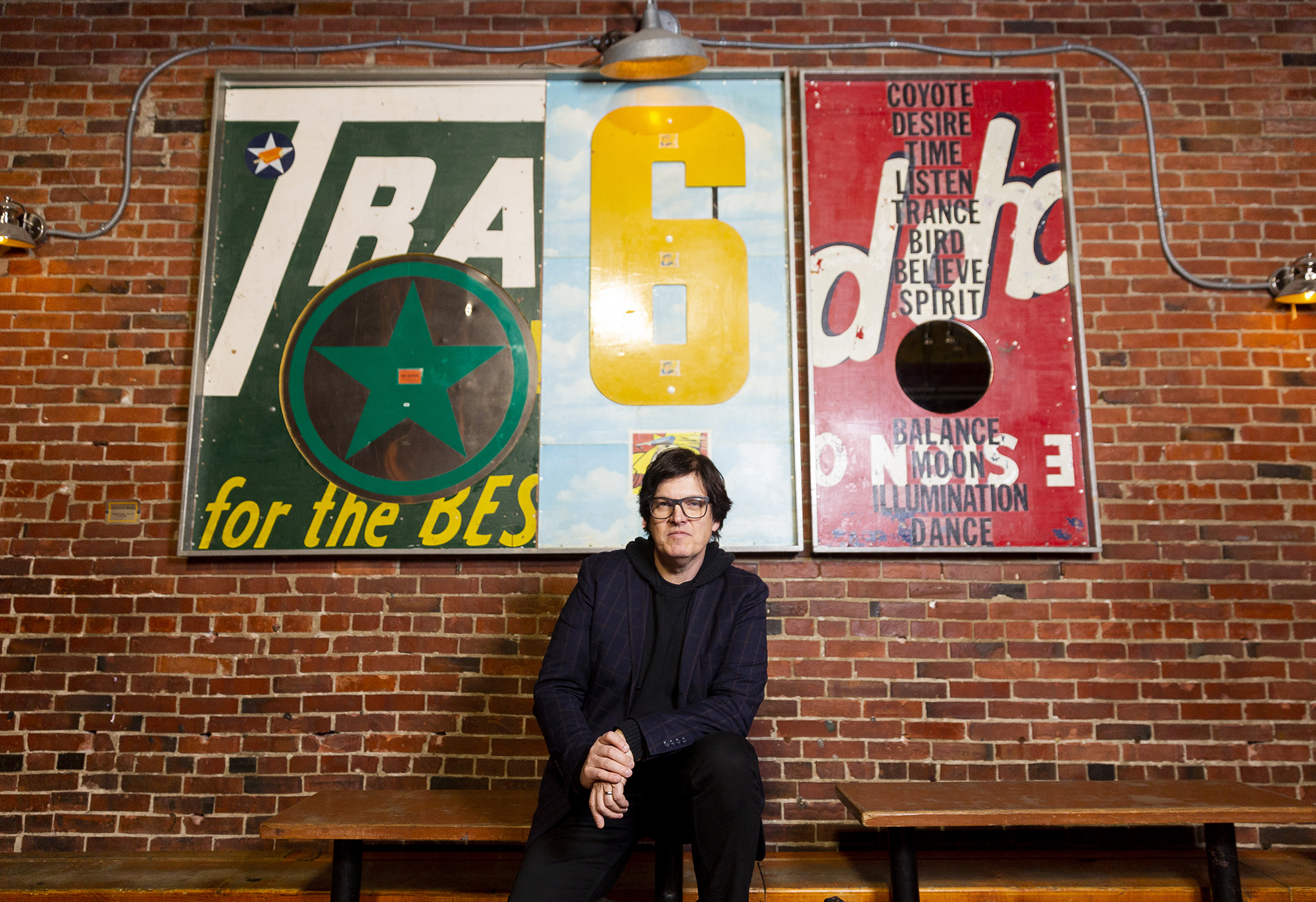 Ben London, a longtime music industry leader and musician, is now executive director of the Seattle chapter of Black Fret. The nonprofit organization uses annual membership fees and corporate funding to award grants to working musicians. Photographed at the Tractor Tavern in Ballard on Saturday, Jan. 18, 2020. (Lindsey Wasson for Crosscut)

On Sunday, the music industry will gather in Los Angeles for the annual Grammy Awards, billed in commercials as “music’s biggest night.” A half-dozen Seattle musicians are up for awards this year, including Brandi Carlile, Chris Ballew and Jeff Ament. Winning a Grammy is a surefire way for a band to boost sales, but in an era when just making a living is a struggle for most musicians, dreaming of fancy awards is secondary to paying rent.

One of the biggest challenges in Seattle is that, although living expenses have gone up significantly, fees from playing clubs have not. Meanwhile, free streaming has virtually ended the idea of profiting from recorded music for everyone other than superstars. This has led to what local singer/songwriter Patrick Galactic calls an “exodus of musicians,” as working musicians move to cheaper places to live.

Enter Black Fret, an Austin, Texas-based funding organization launching a Seattle chapter this month. For the past six years, the nonprofit has been awarding grants to musicians for doing something that almost no one else is paying them for: making music.

Black Fret bills itself as “patrons of local music.” Essentially, the organization raises money through membership fees and corporate grants, and then gives it away to bands that have submitted proposals explaining how the cash might help them meet creative goals.

In Austin, Black Fret has awarded $1.75 million to hundreds of musicians, from rock bands to folk singer/songwriters to a Colombian funk collective. The nonprofit estimates that those grants have themselves pumped an additional half million dollars into the Austin music economy, as thriving bands make greater use of studios, music shops and the like.

I’ve seen more of my friends move out of the city in the last couple of years than at any time in my 20-plus years as a musician.”
— Seattle singer/songwriter Tomo Nakayama

Ben London, a longtime Seattle musician, will helm the local chapter. “Black Fret awards grants to musicians to go on tour, or make a record,” he says. “That’s a new dynamic in the music business. It is something our community gravely needed.”

The grants aren’t huge — most range from $5,000 to $20,000 — but for musicians, that’s enough to record and release a full album. Galactic says for him it could mean the difference between holding down “two to three jobs to simply make rent” and being able to move his music to another level.

Seattle musician Ian Moore is from Austin, and he’s seen the results. Moore works with SMASH, a Seattle-based group that helps musicians get health care, which is also often lacking. SMASH raised $100,000 this year, highlighted by a November benefit headlined by Dave Matthews.

“There’s a duality to taking care of musicians’ health care and providing grants to help them make music and tour,” Moore says. “These work in tandem to give musicians a fighting chance at a time where the music economy is not very favorable.”

London calls the current situation an “economic perfect storm,” which came about because rising costs of living in Seattle began at the same time as a “demonetization of music.” The trend towards “free” streaming comes with a cost, and even live shows don’t make up the difference. London has been in bands in Seattle for the past three decades, including Alcohol Funnycar and Stag, but he says the cover at local clubs hasn’t risen. “It’s been $8 to get in to see most local bands at Seattle clubs for 25 years,” he says.

Ed Beeson knows that math as well, as a former club owner (the Backstage in Ballard), band manager and now with Gigs4U, which brings music to the Seattle-Tacoma International Airport and elsewhere in Seattle. “Black Fret’s funding model will be a meaningful piece for emerging artists,” Beeson says. “But I also think there is a great need for a local music business association that can serve musicians and businesses like studios, venues, retailers and educators. This is really an economic development issue.”

The hype around the Grammys likely will bring up national press about how music revenue in general is on the upswing after decades of decline — total sales of recorded music grew by 10% in 2018, and vinyl now outsells CDs. But those figures don’t take into account that even when you stream Brandi Carlile’s powerful hit “The Joke,” Spotify or YouTube first pays record labels, or music publishers, before anything goes to the musicians. Last month, Nashville songwriter Desmond Child revealed that his cut from half a billion streams over the past year of “Livin’ on a Prayer,” the megahit he co-wrote with Bon Jovi, has only been $6,000.

This is really an economic development issue.”
— Ed Beeson, Gigs4U

Black Fret alone can’t change what streaming has wrought, but London hopes that the organization increases awareness. That average wage of $15,000 puts Seattle musicians below the federal poverty level. Vinyl sales are good news, but vinyl still represents only 4% percent of total revenues in the music industry. To actually master and press a vinyl record also involves a bigger initial investment than pressing a cheap CD, and many bands can’t afford to front that money.

With a plan to award its first Seattle grants later this year, Black Fret could help. But the organization is already doing something entirely differently at its kickoff benefit shows, which have featured local acts like Tomo Nakayama, Shelby Earl and The Black Tones: Unlike most benefits, every band that plays also gets paid.

“We never ask artists to perform for free,” London says. “Musicians are constantly being asked to do benefits for any number of causes, but there really isn’t anyone doing benefits for musicians themselves. We believe musicians are craftspeople, and they deserve to be paid when they work.”

Playing a show for Black Fret might earn a musician only a few hundred dollars, but the idea that music deserves remuneration contrasts with the narrative of the streaming generation. Black Fret’s members pay to join, starting at a $1,500 contribution. That tax deductible contribution gets them into dozens of exclusive shows — and members are the ones who will nominate worthy bands for grants.

“The work that Black Fret is doing in Austin is phenomenal,” says The Black Tones manager DeVon Manier. “They’re actually making a difference in the lives of musicians.”

Singer-songwriter Nakayama is hoping Black Fret can help start a trend by shifting “some of the city’s wealth back to the artists who helped make Seattle such a desirable place.” He’s discouraged by creatives moving away: “I’ve seen more of my friends move out of the city in the last couple of years than at any time in my 20-plus years as a musician.”

Black Fret is considering other cities for expansion. In Austin, its grants have helped bands like the Black Pumas, Wood & Wire, The Deer and Wild Child. There have been Grammy nominations in that group, but don’t expect to see those bands onstage during the televised Grammy broadcast, which focuses on superstars.

Seattle music mostly misses Grammy mainstream acceptance (Nirvana, for example, never won a Grammy while Kurt Cobain was alive). “We have a history of people making innovative art here,” London says, “but most often it is impactful over time, and is the not the stuff that is easily digestible.”

Child’s “Livin’ on a Prayer” was easily digestible, but if that song can’t make money in the streaming era, a problem exists. Watch the video for “Livin’ on the Prayer” and you will basically witness a primer on why Mudhoney, Nirvana and Soundgarden felt they had nothing to lose in creating raw punk-dominated guitar rock that became known as the Seattle sound.

Seattle music became successful because it kept an authentic outsider vision, which in the ’90s finally became recognized around the world. And though music is often marketed as integral to the very idea of Seattle, London says it’s not something we can take for granted.

“If it’s not nurtured, there may come a time when it doesn’t exist,” he says. No one who loves Seattle music — whether Brandi Carlile, the Seattle Symphony, or Pearl Jam — wants to see that.