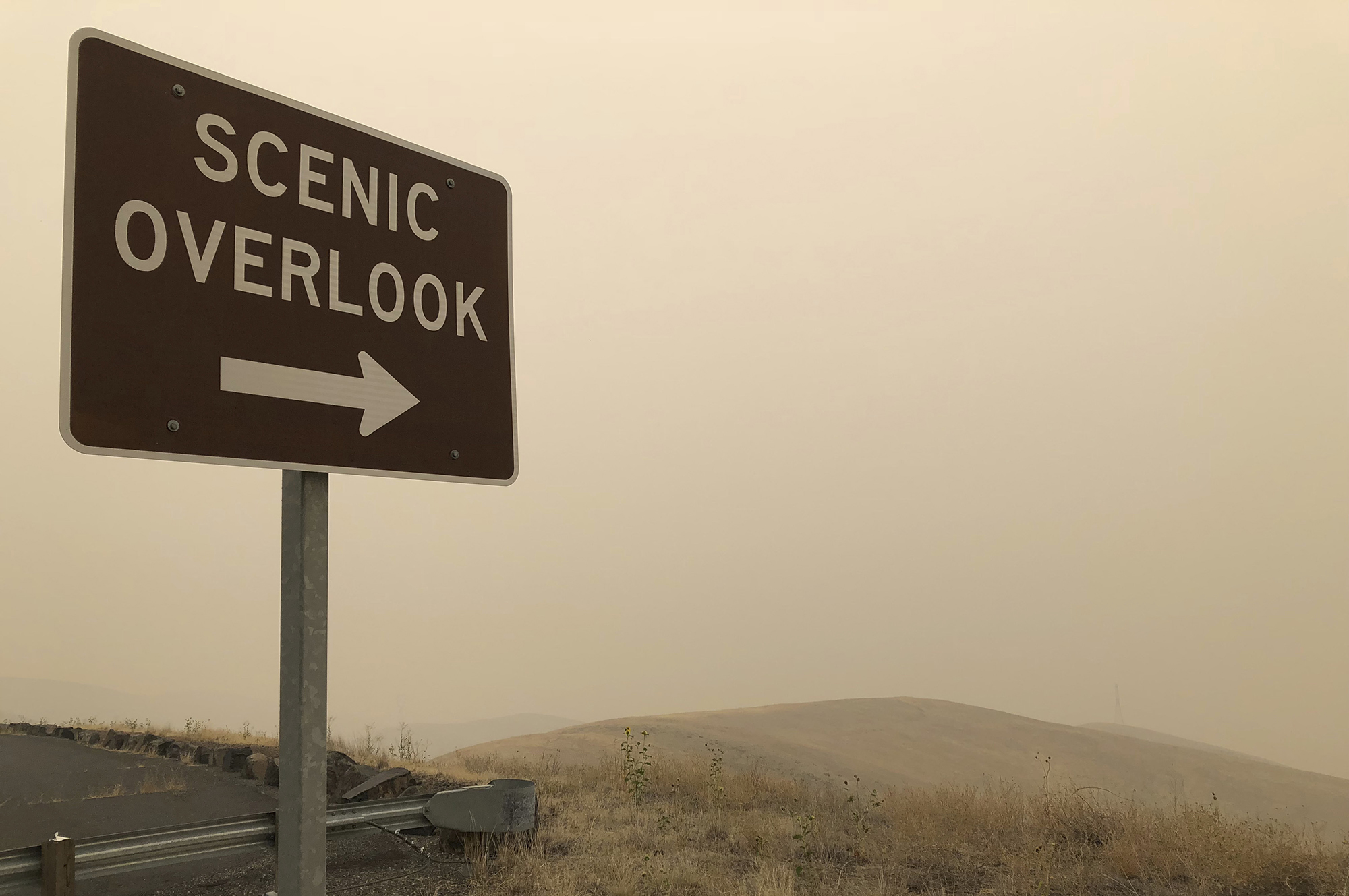 Smoke from wildfires obscures a scenic view near Lewiston, Idaho, Aug. 20, 2018. Smoke from wildfires clogged the sky across the West, blotting out mountains and city skylines from Oregon to Colorado, delaying flights and forcing authorities to tell even healthy adults in the Seattle area to stay indoors. (Jennifer Peltz/AP)

With Seattle’s first snow of the year just melting, preparing for wildfire season might not be top of mind. But Australia’s catastrophic wildfires underline how Washington’s wildfire and smoke season will get longer and burn more intensely with climate change — last year, fires started in March.

Local scientists are just discovering the deadly implications of immediate exposure to smoke across the state.

A new study into wildfire smoke’s impacts on mortality, conducted by researchers from the University of Washington’s Department of Environmental and Occupational Health Sciences and the Washington State Departments of Ecology and Health, shows that smoke has measurable lethal impacts on the state’s collective health.The study was published in the journal Environmental Health.

Data is slim when it comes to wildfire smoke’s health impacts, despite increasing concern that smoke carries particulates and health-damaging chemicals hundreds of miles from fires, affecting breathing and ultimately our longevity.

“There are limited studies looking at mortality and wildfire smoke to begin with in the U.S., so this study builds on that literature base,” lead author Annie Doubleday says.

Researchers used mortality information from the Department of Health and air quality information from Ecology to reach these results. To zero in on smoke-related impacts, the researchers collected death data for about 171,000 people who passed away during the summer months between 2006 and 2017. This data included all deaths outside of traumatic ones, such as car accidents. The deaths were location-tagged, so researchers could identify relevant air quality data surrounding each death.

“We were able to basically link up those two sets of data, and for each of those folks who died during the summer months of our study period, we were able to assign them an air quality status,” says Doubleday, who became an epidemiological data analyst at the Department of Veterans Affairs after graduating with a master's degree in public health from the UW. The findings show whether there was smoke on the day of their death or on the day preceding it. “Using that information in aggregate, we were able to identify trends and see if folks were more likely to die on days that were smoky than on days that were not smoky,” she says.

By population, Washingtonians of all ages are on average 1% more likely to die from nontraumatic causes on days where they’ve been exposed to wildfire smoke, relative to days without smoke exposure. They are 2% more likely to die on the day immediately after a smoke event.

These might seem like small increases in risk, but “mortality is a rare event, so small percentage increases are somewhat significant,” says Doubleday. “We did not expect to find much increase in the risk of dying, if at all, from wildfire smoke.”

Considering how many people are exposed to smoke during large fires, small percentage changes in risk correspond with many deaths, says Julie Fox, a study co-author and air quality epidemiologist with the Deparment of Health. “We also expect that many more people than this are hospitalized or experiencing minor health impacts, and we consider estimates of deaths to represent the tip of the iceberg,” she says.

The study is in service of a statewide effort to better understand wildfire smoke impacts, propelled by study co-author Dr. Tania Busch Isaksen and Dr. Nicole Errett of the University of Washington’s Collaborative on Extreme Event Resilience lab. The pair coordinated a conference in 2018 in which people from more than 30 Washington agencies discussed smoke impact priorities, and they hope the resulting research could help improve public health interventions and communication involving smoke safety.

Dr. Fay Johnston, an environmental epidemiologist and air pollution expert at the University of Tasmania, says the study has particular strengths in that it evaluated several years of data for a very large population. Johnston has done similar research into the health impacts of wildfire smoke.

The study’s findings are “generally consistent” with what she’s seen in her own work, she says, and they “add value through additional analyses of specific age groups and health conditions such as COPD.”

“There are scientists who I respect who say that when biomass burns … it’s not as toxic as coal and diesel, so … we need more data to show the true toxicity of wildfire[-based] PM 2.5,” which are those fine particulate matter associated with health complications, he says, especially as related to cardiovascular mortality. “The Washington study … shows there’s still a mortality effect.”

The data don’t inform individual risk, but emphasize that people statewide — from urban areas like Seattle, Tacoma and Spokane to rural areas — are all impacted by localized fires.

“The understanding of the health impacts from wildfire smoke in Washington is relatively sparse. Only one prior study has examined this in Washington,” Doubleday says. “I think it helps us realize that these impacts are real for us as well — not just for communities in California or Australia — and that we need to do something to protect ourselves.”

“The hotter climate is driving more serious and prolonged landscape fires in many places around the world,” Johnston says. “Australia, despite being a country well used to bushfire, is currently in the grip of a fire and air quality crisis that has been persisting for months and affected the majority of Australians. This scale of fire-smoke pollution is unprecedented, even for a country.”

“It is essential to understand the health impacts so we can get better at protecting people during these episodes,” she adds.

Fox says the team was somewhat surprised to find increases in risk of death related to wildfire smoke for people both with and without preexisting health conditions, and among middle-aged people. “This fits with our guidance that when smoke levels are high enough, the whole general public is at risk, not just vulnerable populations,” she says.

But Doubleday says there’s a lot of uncertainty around these secondary results.

“Some of the results of the subgroups are based on fairly small numbers, and it’s hard to be confident about those findings,” she emphasizes. “As with all observational studies, we cannot come to strong conclusions. Our results are based on the population that we studied, and do not have bearing on the risk for any one individual. It is also extremely challenging to determine individual wildfire smoke exposure.”

There’s also no agreed upon definition of a “wildfire smoke day”: There are geographic and climate-dependent factors that make people experience smoke differently.

Ultimately, the researchers decided to use a threshold measurement for wildfire-based PM2.5, as a good proxy for the intensity of wildfire smoke. Fox points out that their team relied on particulate matter levels from air quality monitor data across the state.

Doubleday hopes that her research will eventually guide health policy and outreach in the Pacific Northwest.

“How do we communicate about the health risks of wildfire smoke, especially to the most vulnerable communities?” she says. “With studies like this, we have a better understanding of which groups are at a greater risk of having adverse health outcomes, so that public health agencies can focus on messaging and implementing interventions for those who are most vulnerable.”

There are strong avenues for application of that work. Along with some of the study’s authors, Fox is involved in an impacts advisory group that the Department of Health established in 2018 to help public health professionals improve messaging around smoke concerns.

All this could in turn inform public behavior — and eventually save lives.

“I think the big picture answer is that, yes, we should change our habits,” Doubleday says. “When it is smoky out, we should stay inside as much as we can, decrease outdoor activity, invest in a high-efficiency particulate air [HEPA] filter, or make your own filter, for a designated clean room at home; and check up on our elderly or vulnerable family members and neighbors.”