As the historic public housing development takes a new form, some residents return while others stay away. 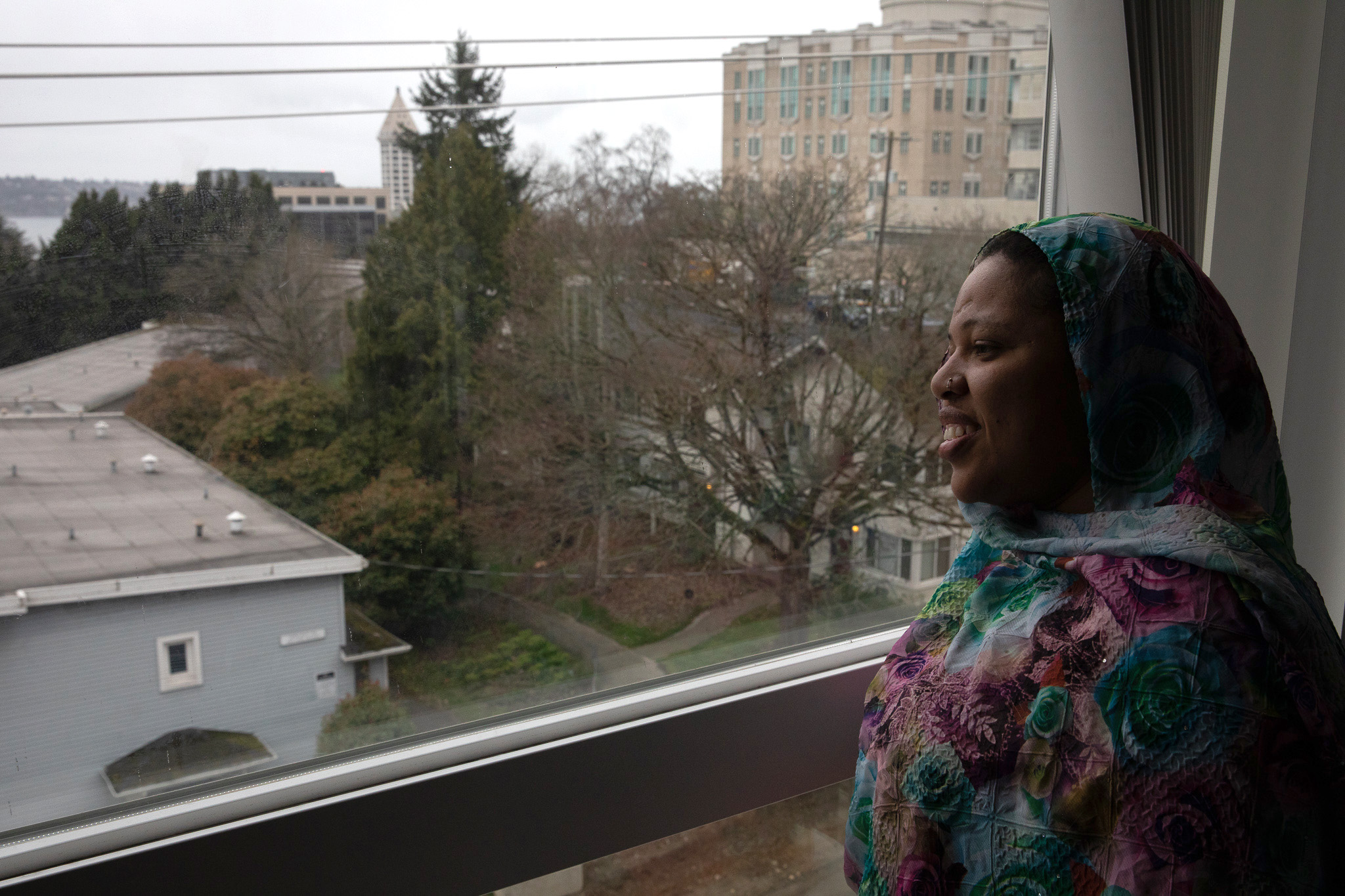 Amina Shali stands beside the window of her two-bedroom apartment at Red Cedar Apartments in Yesler Terrace. She now has a view of downtown Seattle, SoDo, and the former buildings where Yesler Terrace was situated before development. "I've loved the safety of the new building," Shali says. "In my old building people easily access both my front and back door and my car was broken into twice. Here there's underground parking and there are keycards to get into the building and each floor. I love that my kids have a safe place to play now in the courtyard too." (Matt M. McKnight/Crosscut)

Before the last building comes down, Sven Koehler wanted to make a museum — or maybe a memorial — for the old Yesler Terrace.

He wanted to fill one of the last remaining apartments with artifacts from the decades-old public housing complex and to invite former residents to write "love letters" on the walls before those walls are knocked down and dragged away.

The coronavirus put a hold on that plan. But the sentiment remains — Yesler Terrace is nearing its next stage as what remains of the original development is finally shuttered.

It's been seven years since developers broke ground on the new Yesler Terrace and many more since talk of replacement began. Construction has unfolded in a checkerboard pattern, as high-rise apartments have one by one taken the place of the historic rowhouses. The once-squat housing project is dense now, a mix of deeply subsidized and market-rate homes. And soon it will become even more dense as the leftovers of the 80-year-old low-rises are torn down.

There are years to go yet before the construction is complete, but residents and managers are nevertheless nearing a milestone: Of the roughly 500 households that called Yesler Terrace home before its transformation began, the last family was recently offered somewhere new to live.

When they've moved — by April 1 at the latest — the final deconstruction will begin. The northern row nearest Harborview will be the next to go, sometime in late March or early April. The structures to the west will follow. If all goes as planned, the last of the iconic rowhouses — symbols of racial and cultural integration perched at the summit of Seattle's old Skid Road — will be rubble by May.

As the "relocation coordinator" at the Seattle Housing Authority, Koehler carried out the central promise of the Yesler Terrace redevelopment — that any resident who wanted to could return and those who didn't would have somewhere else to go. He knows each family by name, and they in turn know his.

His primary job is nearing its end. Of the 493 households that were living in Yesler Terrace before construction began, 208 moved directly into the new buildings. An additional 52 left temporarily, then returned.

Except those final two households, the rest have gone elsewhere — into a different Seattle Housing Authority property or somewhere else with the help of a Section 8 voucher. Some have moved out of the state or even returned to their home countries. Each household was given 18 months’ notice to decide where to go.

"Part of it was being very patient with people and giving them enough time to make this decision," Koehler said in his on-site office, cluttered with paperwork and notes from families.

Founded in 1939, Yesler Terrace was the country's first racially integrated public housing project. It became famous for its vibrancy, a counterbalance to the derided "projects" of large East Coast cities. Former Washington Gov. Gary Locke lived there, as did the late Ed Lee, former mayor of San Francisco. Jimi Hendrix lived there, too.

There are no shortages of microcosms for the change and growth in Seattle. But there's something particularly salient about the redevelopment of Yesler Terrace, which contains the promises of growth's benefits, alongside the corporatization that others fear most. Tucked between two of the city's most quickly gentrifying neighborhoods — Chinatown-International District and the Central District — the new Yesler Terrace tends to evoke a sense of nostalgia, promise, reticence and, for some, begrudging acceptance, sometimes all at once.

As residents came and went, Kristin O'Donnell stayed. O'Donnell, 79, moved to Yesler Terrace in 1973 after a divorce. When she learned of the redevelopment plans, she thought to herself, "There goes the neighborhood."

In addition to mold and pests, the piping beneath the old apartments needed to be torn up, a herculean project that would mean huge expense and headaches for the residents. "It wasn't really a choice about redeveloping Yesler, because the buildings themselves had aged to the point that they couldn't be rehabbed," said Kerry Coughlin, a spokesperson for SHA.

So the housing authority made a calculation: It would sell parts of the land to a private developer and use that money to create a new Yesler Terrace. The result would be a mix of deeply subsidized housing, "workforce" housing affordable at a slightly lower income level, and market-rate homes.

For O'Donnell, it was the sell-off that concerned her most. "It belonged to the public; it was public land," she said. "It's now private land. Is the public going to ever get that back? No, they're not."

And yet, after leaving for a few months when her apartment's time was up, O'Donnell returned. Despite her concerns, she marvels at the views from her upper-floor apartment. The elevators, too, make her life easier.

The redevelopment was "the least bad decision," she concluded. "They sold off the farm in order to save it…. It's nicer than subsidized housing ought to be. But if somebody has to live there, it might as well be me."

Others feel little nostalgia at all. Asked if she misses the old Yesler Terrace, Amina Shali doesn't hesitate: "No." 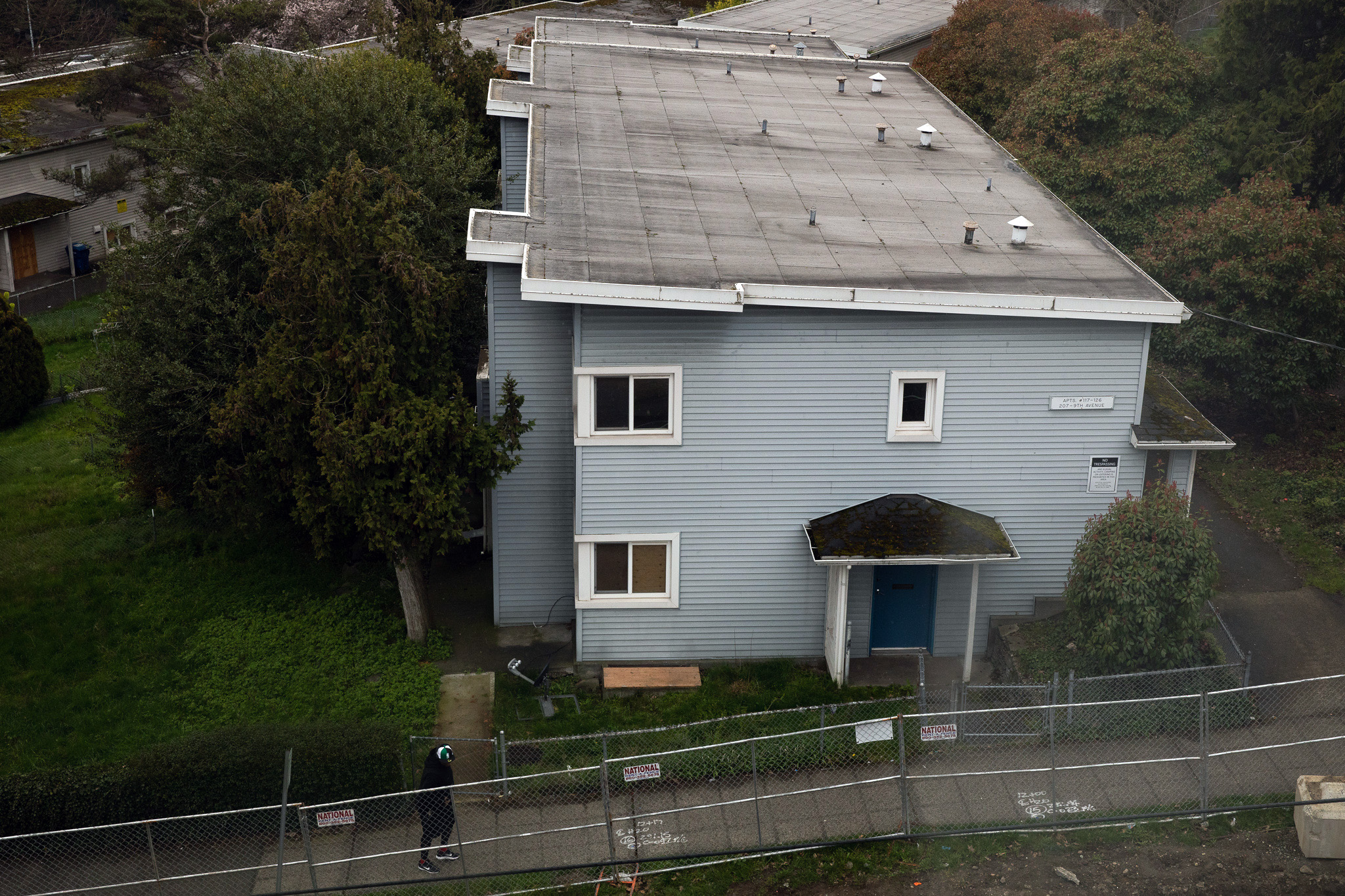 A Somali immigrant by way of a Kenyan refugee camp, Shali and her then-husband briefly left Yesler Terrace in 2014. But when the two separated, she reached out to Seattle Housing Authority and said she wanted to return.

She marvels at the newness of it all — the laundry, the parking, the sleek interior. And for Shali, the community feel remains. Her children, 11 and 14, can still walk out the door and she doesn't worry.

"Especially for the kids, they know each other," she said. "They grow up together. They go out and play and it's not strangers. I can just trust my kids to go out."

Yesler Terrace used to be an island of 561 low-income homes. By partnering with private developers — Paul Allen's Vulcan — that's no longer the case. When it's complete, there will still be the same number of homes for very low-income people. But there will also exist up to 4,500 additional apartments. About a quarter of those will rent for just below market rate — a deal agreed to by Vulcan — and the rest will fetch whatever renters will pay.

So far, Vulcan has completed 432 apartments, according to Lori Mason Curran, Vulcan's investment strategy director. About 95 percent of those are already leased.

For O'Donnell and others, living next to Seattle's younger professional class is an adjustment. They move in, then they quickly move out, said O'Donnell. It's all very transitory, a change.

"We couldn't ever sugarcoat the fact that things were going to change in Yesler Terrace, that things were going to densify," he said. "For the people who have moved and not come back, partly it's because some people would not like to live in a dense Seattle. We shouldn't be surprised that people of low means also make those decisions of moving into a more suburban feel of housing type or that people are making the choice to stay in this community, in a more-dense Seattle. It's the same kind of choice a lot of Seattleites are making."

Kim Do is one resident who decided not to return. "We had a backyard, we had water outside," she said of the old Yesler. "As Vietnamese, we love to eat seafood. And the smell is strong. We would go outside, wash and cook inside or outside. [At the new Yesler], we cook and the neighbors complain because it's stinky."

So she and her husband left in favor of a townhome up the road, where they could still have a backyard. She returns to Yesler Terrace to volunteer with Neighborhood House.

But while she didn't love the hallways or the windows that open only part-way, she looks to the gleaming towers — which seem to bear witness to the traffic-clogged highway, an evolving downtown, Amazon's since-abandoned first headquarters, the mountains and Puget Sound — and acknowledge it's a reaction to the boons and burdens of growth.

"Before we had not that many people who lived here. And now, one building has over 100 people, it can contain more people," she said. "Somebody moves here every day, moves to Seattle. I know that." 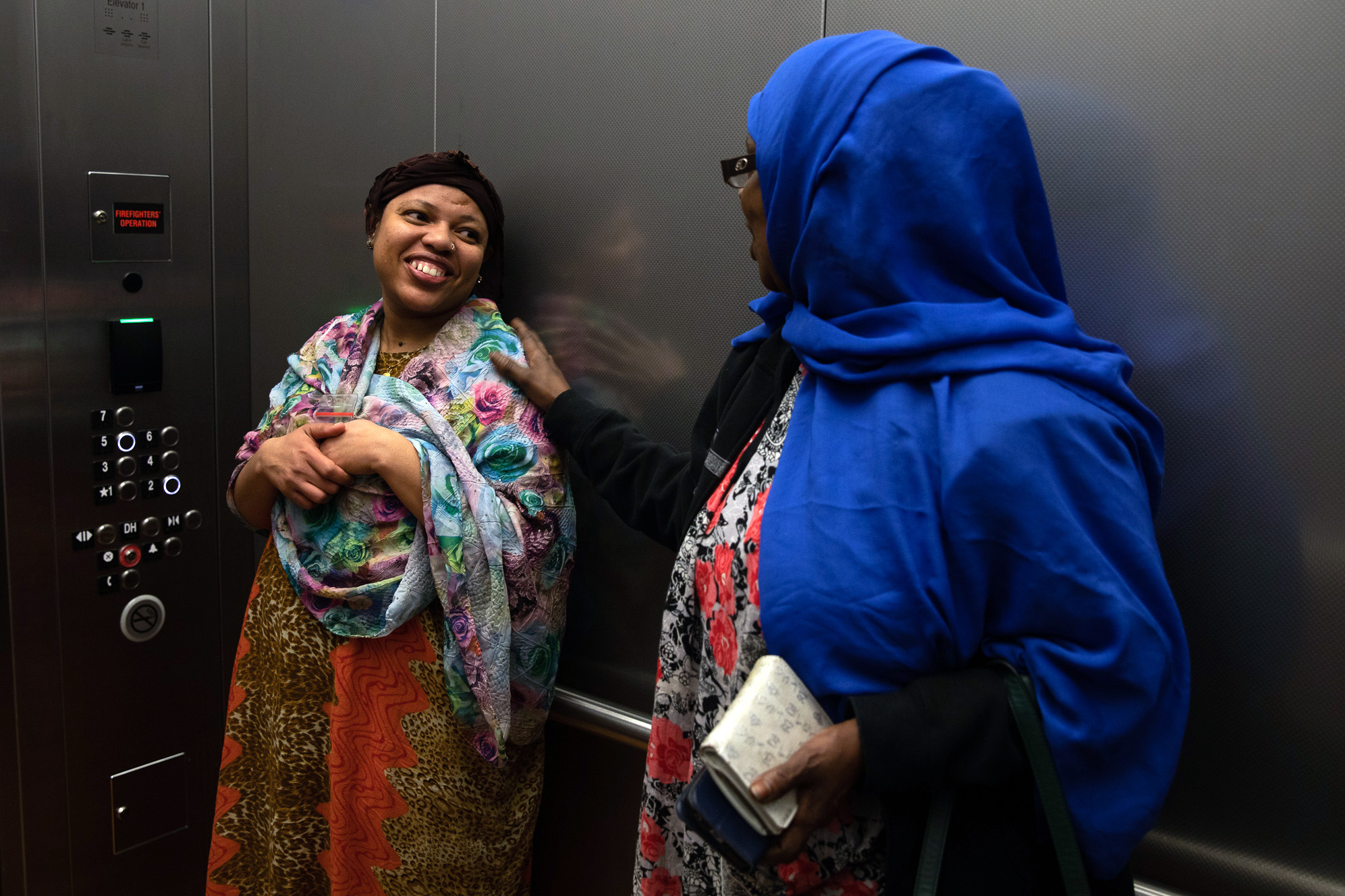 Amina Shali speaks with her neighbor Marian Ahmed in the elevator at Red Cedar apartments in Yesler Terrace, March 11, 2020. They first met when she moved to the city in 2012 and have remained friends with her through the transition into the new apartment building. (Matt M. McKnight/Crosscut)

Amina Shali speaks with her neighbor Marian Ahmed in the elevator at Red Cedar apartments in Yesler Terrace, March 11, 2020. They first met when she moved to the city in 2012 and have remained friends with her through the transition into the new apartment building. (Matt M. McKnight/Crosscut)