Decision comes in the wake of revelations that Washington State Patrol troopers search people of color at far higher rates than whites. 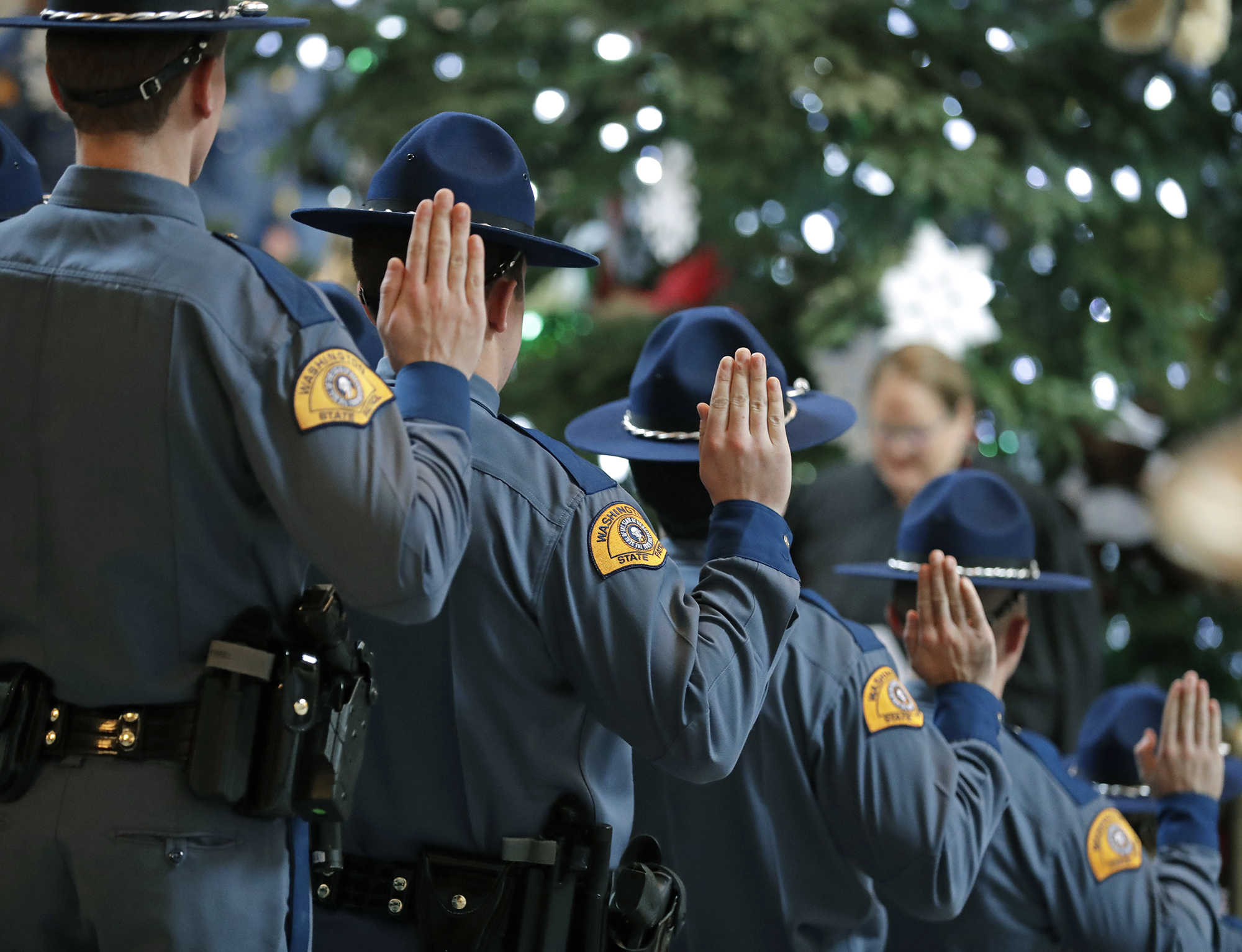 New Washington State Patrol troopers taking part in a graduation ceremony raise their right hands and take the Oath of Office, Thursday, Dec. 13, 2018, in the Rotunda at the Capitol in Olympia, Wash. The class of 31 troopers completed more than 1,000 hours of training and will now work for the WSP across the state. (AP Photo/Ted S. Warren)

In the wake of revelations that Washington State Patrol troopers search people of color at far higher rates than whites, the state Legislature has agreed to pay $50,000 to investigate bias in police stops.

And in a related development, lawmakers approved funding designed to boost diversity in the ranks of state troopers, the overwhelming number of whom are male and white.

InvestigateWest reported in December that after the State Patrol in 2008 quietly discontinued studies in which university researchers warned that there were indications of possible bias in searches of motorists, the disparity in search rates continued. Two years later, the Patrol stopped reporting legally required information about the race of motorists pulled over by troopers, with a Patrol official arguing internally to colleagues that it was unlikely anyone would notice.

As it turns out, when state troopers do search white motorists, they are actually more likely to find drugs or other contraband, according to data from the State Patrol reviewed by InvestigateWest and the Stanford University Open Policing Project.

The money for the bias study, requested by Rep. Gina Mosbrucker, a Goldendale Republican, funds a collaboration between state police and Washington State University to analyze traffic stop data the Patrol keeps. That money will also be spent to survey Washington residents’ perceptions of the State Patrol. The funding was included in the supplemental state budget passed by the Legislature on Thursday; it awaits Gov. Jay Inslee’s approval.

The agency must submit a report to the Legislature at the end of the year.

“I'm really anxious to find out what the outcome is and begin fixing whatever we can,” Mosbrucker said in a telephone interview. “I'll address it with legislation if needed in the next legislative session.”

Mosbrucker requested the funds after InvestigateWest’s analysis found that from 2009 to 2015, the most recent data available from Stanford’s Open Policing Project, troopers searched Blacks, Latinos, Native Americans and Pacific Islanders at a higher rate than whites. Yet troopers were more likely to find contraband when they searched white drivers. Stanford’s own study last year of police departments nationwide found “evidence that the bar for searching Black and Hispanic drivers is lower than for searching whites.”

The funding for the bias study will allow the patrol to focus “on real-world strategies in our training and operations that can address the disproportionalities in search statistics," Chris Loftis, a State Patrol spokesman, wrote in an email.

"We feel that the combination of enhanced training, improved operational tactics, and a wider and deeper candidate pool will help us continue to improve our services overall and specifically help us to understand and root out any impacts of bias in all of our operations," Loftis wrote.

In Washington, Native Americans were more likely to be searched than any other group — they were searched at five times the rate of whites — something WSU researchers had raised concerns about more than a decade ago. In 2003, 2005 and 2007, the researchers flagged the disproportionate search rates, but cautioned they couldn’t attribute them to “intentional or purposeful discrimination,” and called for more studies.

However, documents InvestigateWest obtained through the Public Records Act found that not only did the Patrol abandon the WSU studies after 2007, but also failed to follow a 2000 state law requiring the agency to “semiannually” report data on the racial breakdown of motorists that troopers searched. The State Patrol submitted the reports only in 2001, 2008 and 2009. Years later, a 2016 change to state law described by its sponsors as a paperwork reduction measure eliminated the reporting requirement.

The transportation bill passed Thursday includes $150,000 requested by Rep. Javier Valdez, a Seattle Democrat, to hire a consultant to develop a plan for increasing the diversity of the Patrol’s troopers. More than 85% of the Patrol’s officers are white, and nearly 90% are male. Tribal leaders in Washington state have called on police agencies across the state to increase their diversity.

The studies fall short of experts' recommendations for addressing implicit bias, the idea that everyone has unconscious biases and a potential explanation for why police search people of color at a higher rate than  whites, regardless of evidence a crime has been committed. Experts have called for additional training and policy changes that head off implicit biases.

State Patrol officials said some Seattle-area troopers have gone through an eight-hour implicit bias training course, far lengthier than the 50-minute training session that cadets receive at the training academy. However, they’re waiting to see the training curriculum created by the Criminal Justice Training Commission after the passage of ballot measure Initiative 940 before deciding whether to expand their own anti-bias training. The initiative, which Washington voters passed in 2018, requires new criteria for investigating killings by police and statewide de-escalation training that is expected to include learning about avoiding bias.

Maru Mora-Villalpando, a Latina activist and CEO of the Seattle-based consulting firm Latino Advocacy, was unimpressed with promises to study the issue.

“Studies only reflect the Legislature doesn't believe us,” Mora-Villalpando said. “They need another entity to come in and tell them what we've been telling them all along. ... We know this is real.”

Ending what she called “structural racism” and “a culture of impunity” in police departments in general will be difficult work, Mora-Villalpando said. Whatever solutions the State Patrol and the Legislature come up with, she said, communities of color need to be involved.

State Rep. Debra Lekanoff, D-Bow, agreed the steps the Legislature and the State Patrol are taking need to be paired with additional policy changes, such as improving training. Lekanoff, an Alaska Native who served as the governmental affairs director of the Swinomish Indian Tribal Community for more than 15 years, said she had her own brush with biased policing more than a year ago. She was pulled over one night as she and her daughter left the Swinomish longhouse, and the officer, who worked for a municipal police department, bullied her and made racially insensitive comments, Lekanoff said. At the time, she hadn’t yet been elected.

Lekanoff said she understands the urgency of fixing the issue right away, but she also wants the state to move deliberately in addressing bias in policing, so the solutions put forward actually have an impact.

“The state Legislature is ensuring that when we build a program, we build a program that has accountability with the study behind it and [input from] a number of voices across the state,” Lekanoff said. “This helps the Washington Legislature work with the Washington State Patrol and stakeholders ... to develop the most effective plan and training that is there for the long run.”

State Patrol officials were responding to the coronavirus outbreak Thursday and Friday and weren’t available to comment. After reviewing InvestigateWest’s findings last year, spokesman Chris Loftis said the Patrol’s response to the inequities in searches “is not adequate” and is “committed” to addressing the issue.

InvestigateWest is a Seattle-based nonprofit newsroom producing journalism for the common good. Learn more and sign up to receive alerts about future stories at http://www.invw.org/newsletters/