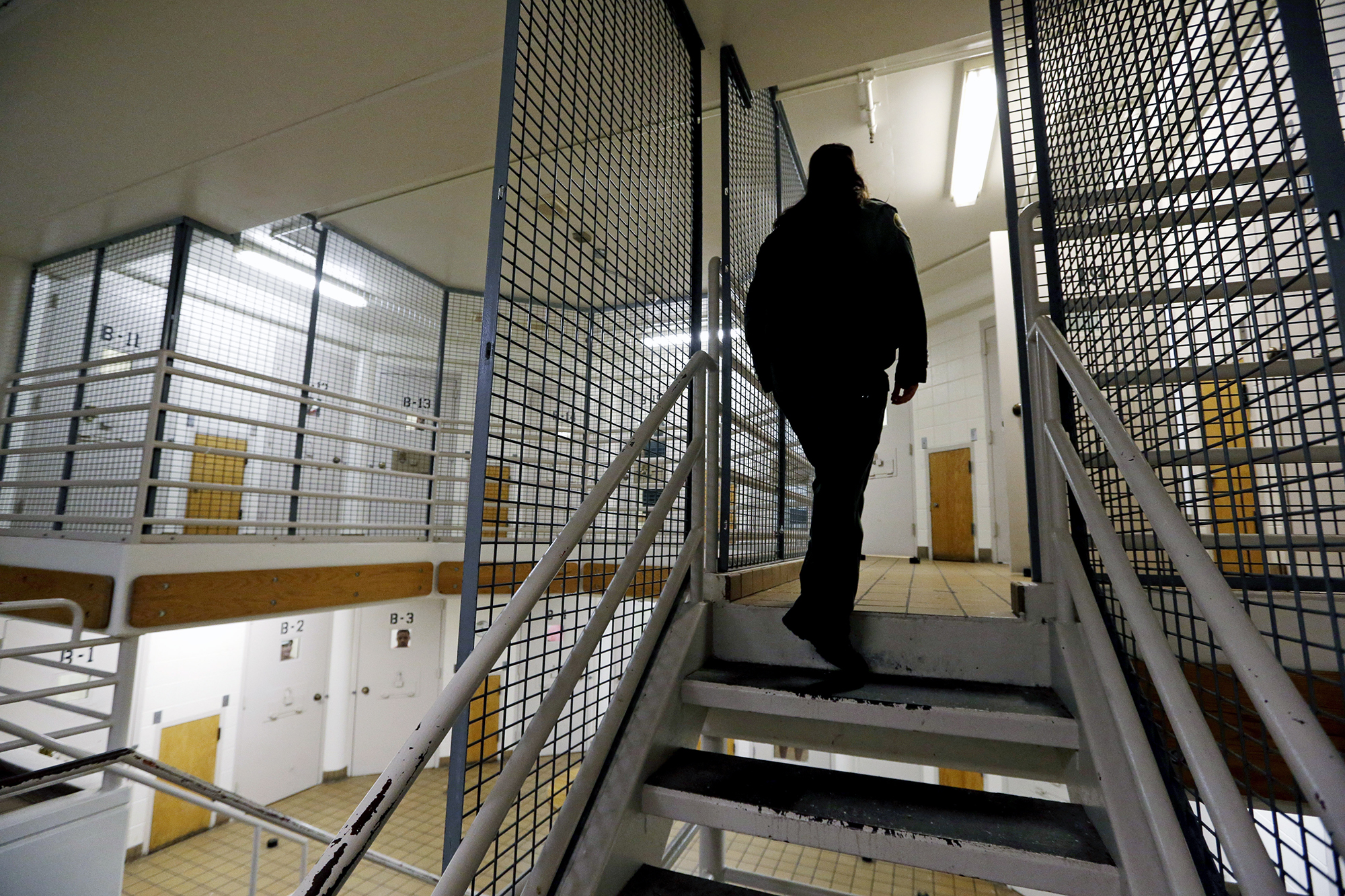 A corrections deputy walks to the upper level of the psychiatric unit of the Pierce County Jail in Tacoma, Wash. As coronavirus shelter-in-place restrictions extend into May, some fear that jails may be too densely populated and could spread the virus quickly through jail facilities. (Elaine Thompson/AP)

Dressed in his jail-issued red uniform, my client walked out of the holding area — the “tank” as it’s colloquially known — and was directed to a podium in the corner of the courtroom. I was relegated to a desk 6 feet away, despite having been an arm’s length away from him in the tank just a few minutes ago.  The prosecutor was appearing by telephone. The judge and court staff were another 6 feet away. These were the court’s orders to comport with what most of us on the outside have come to expect. It’s a façade to my clients, but they played along.

Inside the King County Jail, I’m told, social distancing is not a thing. Inmates are dealing with the same panic we are all experiencing, but with notable differences. They lack information about how this new reality applies to their unique situation, and they lack the agency to take measures to protect themselves. Whether their imprisonment is justified or not, these are people whose liberty and autonomy have been stripped by the courts.

Inmates say the jail has not effectively communicated its sometimes dramatic, intimidating measures to those inside. The lack of information makes the actions seem haphazard and frightening, leading to hysteria. Random stories of inmates being swept into quarantine abound.

Read more: A diary of death and disdain in the time of coronavirus

One young man in the tank overheard me speaking with my clients about the conditions in the jail. “Excuse me,” he said, “I just want to tell you. …” His eyes were wide, his voice desperate as he clutched his inhaler. He recounted a story about a fellow inmate who was taken from his cell and sent to be quarantined in another jail. All inmates where he was housed were ordered out and held in a crowded place. The cells were hosed down and doused with bleach. No explanation was provided to those who were living with him. The young man noted, “I shared a tray of food with that guy.”

Inmates do all the filthy work in the jail. In return, they get a few pennies an hour, an extra tray of food and more freedom to move around. Inmates are tasked with cleaning toilets and cells. On any given day, there is blood, feces, urine and vomit. While barber shops on the outside have been ordered to close, business continues as usual for inmates tasked to cut hair at the jail. Inmates doing such work are at higher risk of exposure, and they put others at risk, too. They walk around between the different levels at the jail, interacting with the old and infirm, the sick and compromised, the newly booked and those who’ve been locked up for a while.

Inmates hear on the news the need for protective measures, and they are frightened. Not long ago, the workers asked for extra protection on the job. They say they were threatened with restrictive custody and being blacklisted for future work placement. With a minor concession or two, some were brought back on the force. Others allege they were laid off and punished as an example, making room for new recruits desperate for a job and less resistant to the hazardous conditions. (When asked for comment, a jail spokesperson said inmate workers have been provided with protective equipment and additional cleaning materials. The spokesperson also noted that the inmate worker program is voluntary and inmates can leave it at any time.)

Instead of stepping up, jail health services are scaling back. King County Jail health officials say this austerity is needed “to prepare to manage large numbers of sick people with a smaller-sized health staff.” Sanitizer is contraband. Some inmates are able to clean their own cells only once every 10 days (it’s a 10-cell unit, two bunks per tiny cell, and the cleaning schedule rotates only once per day). There has been one reported case of a King County Jail guard testing positive for the virus. Reportedly, no inmates have tested positive. Because there have been no confirmed cases among inmates, prosecutors and the court continue to downplay concerns of infection at the jail. The problem, however, is precisely that we have no control over its spread, and when it hits the petri dish that jails are, the results will likely be catastrophic. Once there is a confirmed case, it will be too late.

We are quick to criticize recent calls to get back to work and save the economy in exchange for the lives of the older and weaker among us. Yet the court system continues to find that judicial expediency is worth more than protecting the lives of those in jail. Earlier this month, the Washington state Supreme Court indicated that COVID-19 may serve as a legal basis for reconsideration for release in all cases. The court’s order, which directly contradicts what some judges had maintained until that point, gives trial judges leeway to consider the health and safety of inmates in considering these requests. This was a hopeful sign.

But, over the two weeks since the issuance of the order, as I listened to inmate after inmate plea for release, I sensed a general lack of compassion towards the imprisoned and their new reality. From 6 feet away, inmates implored the court to reassess the risks of keeping them in custody. Some brought their medication bottles with them. Others asked the court for mercy so they could be with family. Others shuddered as their attorneys made arguments about the increased risk they faced being held in close confinement. As I argued for one of my clients, his reality sank in a little deeper for me. I couldn’t look at him as I laid out the risks he faces as a diabetic patient. Higher probability of contracting the virus, more severe symptoms. Death. He doesn’t have the luxury of using hand sanitizer or maintaining a healthy social distance.

The 6 feet between my clients and the judges, court staff, prosecutors and even myself were a way to cordon off their reality. We pulled them out of the cramped jail into court, set them 6 feet away. They stepped into the reality of our current world. It’s a startling new reality. The courtrooms are largely empty, attorneys are appearing over speakerphone, everyone is reaching for hand sanitizer. It confirms everything my clients have seen in the news — the shuttered stores and empty streets. But they are rebuffed when they ask for the same protections we are enforcing on the outside. We refuse to see their reality — one in which fear is high but agency nonexistent. In refusing to see it, we are failing in our responsibility to protect those whom we have rendered helpless.


The views in this article are those of the author and do not necessarily represent the views of the King County Department of Public Defense. 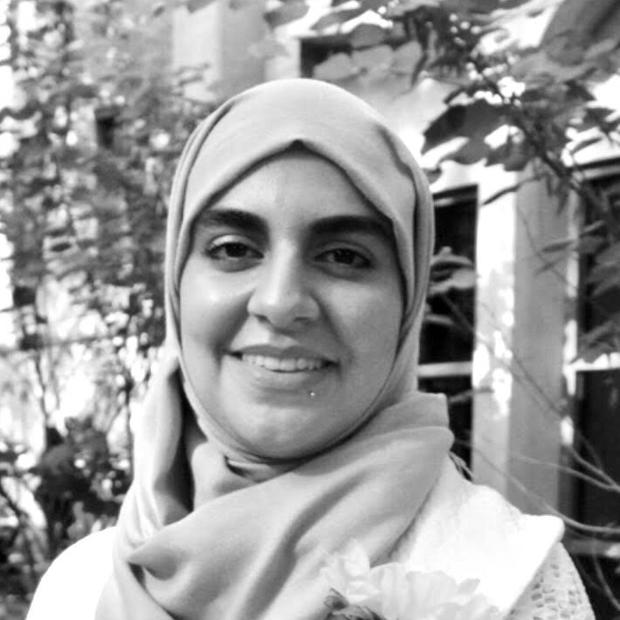 Safa Peera is a public defender at the King County Department of Public Defense.