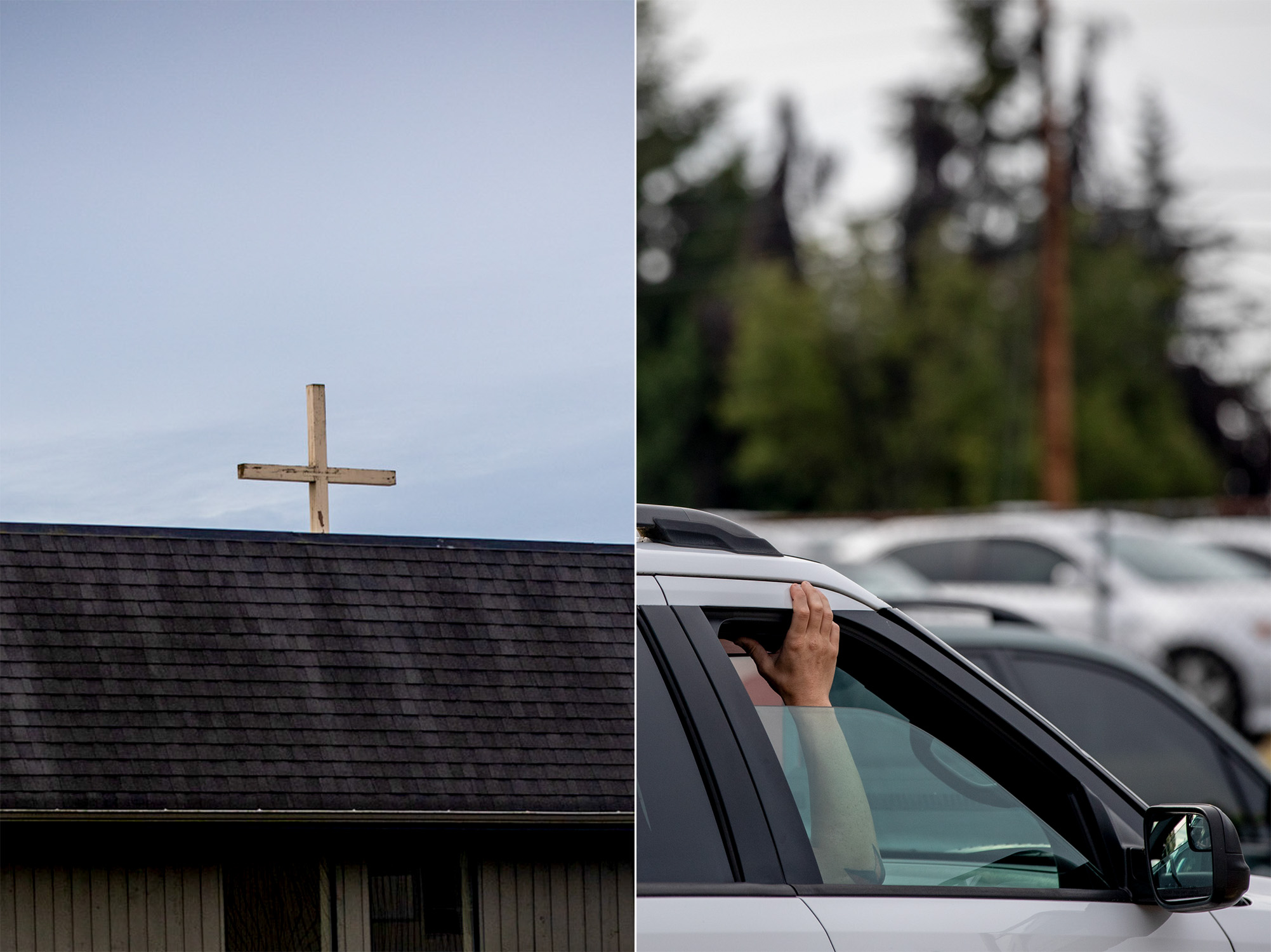 Scenes from a drive-in church service at The Grove Church in Marysville on May 24.

On Sunday morning, in a parking lot in Redmond, volunteers wearing face masks and offering free kettle corn waved in dozens of cars. After parking and tuning in to 107.9, drivers and passengers waited in their vehicles, anticipating the beginning of the service at Timberlake Church.

Tanya Korets, a 36-year-old nurse at EvergreenHealth, the Kirkland hospital that was the country’s first to identify a COVID-19 outbreak, sat in her SUV reading the Bible, while her four children — ages 3 to 11 — squirmed in the back.

“It’s been tough not being able to get together. Drive-in services help you cope with everything that is going on,” Korets said.

“A lot of people are so anxious about life,” said the six-month member of Timberlake Church, based in the suburban city east of Lake Washington that is home to Microsoft.  “Being closed up, alone, it’s difficult for people.”

Korets, who lives in Snohomish, said she believes communities should have the freedom to not only make their own decisions about whether to hold alternative church services that limit social interactions, but reopen more fully. Worship services help people by offering them a chance to pray and hand the burdens they carry with them over to God, she said.

But for now, drive-in service would have to do.

All around the Seattle region, church members and religious leaders have tried to sidestep the heated argument about whether houses of worship should be allowed the freedom to open the doors to the faithful by avoiding the debate and opting for socially distanced methods, such as praying over Zoom and holding drive-in services.

More on religion and COVID-19: Ramadan during crisis is an opportunity to help.

Further north, in Marysville, Pastor Ryan Loffer led a drive-in service over the weekend at The Grove Church. Like others on Sunday, Loffer wrestled with the question of returning to work full time.

“I love my wife, and I love my kids, but on the issue of work I’m ready to go back to the office. It is hard,” Loffer said during his sermon. “The stress temperature, the heat has been turned up for so many of us.”

Loffer cautioned there are no easy answers. “On this topic of church and should we be meeting together,” Loffer began. “Don’t let it, wherever you’re at, don’t let that become a dividing factor. We are in this together.”

On Friday, President Donald Trump reignited the religious debate some had managed to avoid by threatening to overrule governors who refuse to allow houses of worship to reopen in the midst of the pandemic.

“Some governors have deemed the liquor stores and abortion clinics as essential, but have left out churches and other houses of worship,” Trump said. “It’s not right. So I am correcting this injustice and calling houses of worship essential.”

“In America, we need more prayer, not less,” Trump concluded.

Trump and other members of the White House staff insisted churches everywhere could reopen safely that very weekend because the Centers for Disease Control and Prevention had issued guidance for communities of faith, suggesting limits on sharing religious objects, choir singing and other measures.

Some faith leaders immediately pushed back on the idea that church services could safely resume and that they should ignore local guidance issued by governors. Washington state Catholic bishops released a statement noting that Mass would continue to be suspended “out of our deepest respect for human life.”

“As disciples of Jesus, we are called to be instruments of God’s protection for the vulnerable and the public common good,” the letter read. “Our love of God and neighbor is always personal and not partisan.” The bishops indicated that they would continue to work closely with Gov. Jay Inslee on a plan to hold Mass again.

Masih Fouladi, executive director of CAIR Washington, responded even more forcefully to Trump’s suggestion, saying Muslims “will not follow the lead of a president who suggests injecting people with ‘disinfectants’ and who refuses to follow basic CDC guidelines like wearing a mask in public.”

But other religious leaders have embraced Trump’s directive. Under growing pressure, public officials have also changed their minds about church gatherings. On Saturday, Minnesota announced that it would lift restrictions and allow houses of worship to open at 25% of capacity. Catholic and Lutheran leaders had previously indicated they would defy Minnesota Gov. Tim Walz if church services were not allowed to resume.

On Wednesday, Gov. Inslee announced that counties in Phase 1 will be allowed to hold outdoor services for up to 100 people wearing face coverings as long as they observe physical distancing. Indoor services at 25% of capacity, or fewer than 50 individuals, whichever is less, can resume at churches in counties in Phase 2. Spiritual services in private homes are allowed for groups made up of no more than five people.

“I do want to encourage people if they can continue their creative ways of congregating that have been successful for them already, that would be great,” Inslee added.

Lawsuits have also been filed in various states, demanding that faith leaders be granted the First Amendment right to practice their religion. Here in Washington, four Republican lawmakers sued Inslee in early May, saying their right to worship had been harmed. In April, Republican gubernatorial candidate Joshua Freed filed a similar lawsuit, targeting Inslee’s ban on spiritual gatherings.

The reopening of churches has already had consequences in some places. At least two churches in Georgia and Texas that reopened earlier promptly shut down again in May after some worshippers tested positive for the coronavirus. In Texas, the reclosing came after a priest at Holy Ghost Catholic Church in Houston died from what was believed to be COVID-19.

And a recent report from the CDC documented how a coronavirus outbreak in a rural Arkansas church spread from a pastor and his wife to 35 attendees, killing three.

In April, a Virginia pastor who defied stay-at-home orders died of COVID-19. The death of Gerald O. Glenn was announced during an Easter sermon.

And here in Washington state, a choir practice at Mount Vernon Presbyterian Church unknowingly infected 53 people in early March, leading to the deaths of two people, highlighting the danger that might lurk in common and seemingly benign church activities. The CDC has called choir practices potential “superspreaders” because of “opportunities for droplet and fomite transmission.”

“The act of singing itself might have contributed to transmission through emission of aerosols, which is affected by loudness of vocalization,” the CDC said.

Back at Timberlake Church, Pastor Shane McCroskey complained of “a lot of mixed messages coming in” from the federal government and local leaders like Inslee. “I get it, it’s evolving,” McCroskey said. “We’re just trying to move slowly.”

Timberlake members John and Brita Grotte spoke about the difficulty of finding the right balance between keeping people safe and meeting the needs of the faithful.

Brita, an emergency room nurse at EvergreenHealth, said she sees at work the repercussions of not following social distancing guidelines. “I think we should look to people who have bigger degrees than we do,” Brita said when asked whether churches should resume services. But she and her partner also expressed concerns about mental health challenges going ignored.

Alicia Pinorini, a 37-year-old stay-at-home mom from Lake Stevens, said she welcomed the opportunity that drive-in services in Redmond offered her to get out of the house. But Pinorini said social distancing had been happening long enough and that churches should be allowed to reopen, as long as safety guidelines were in place. “I don’t see the harm in that,” she said.

Inslee has said King County is not yet ready to move on to Phase 2 of reopening because there has not been a two-week decline in coronavirus cases, among other factors.

Lindsey and D.J. Neyens, members of The Grove Church for about five years, said drive-in services offer “a little resemblance of normalcy.”

But D.J., a 36-year-old firefighter, warned that while the Bible teaches Christians to gather and pray, showing the Lord’s love to one another sometimes involves discernment.

It’s about “How can we do the most good for everybody?” he said.