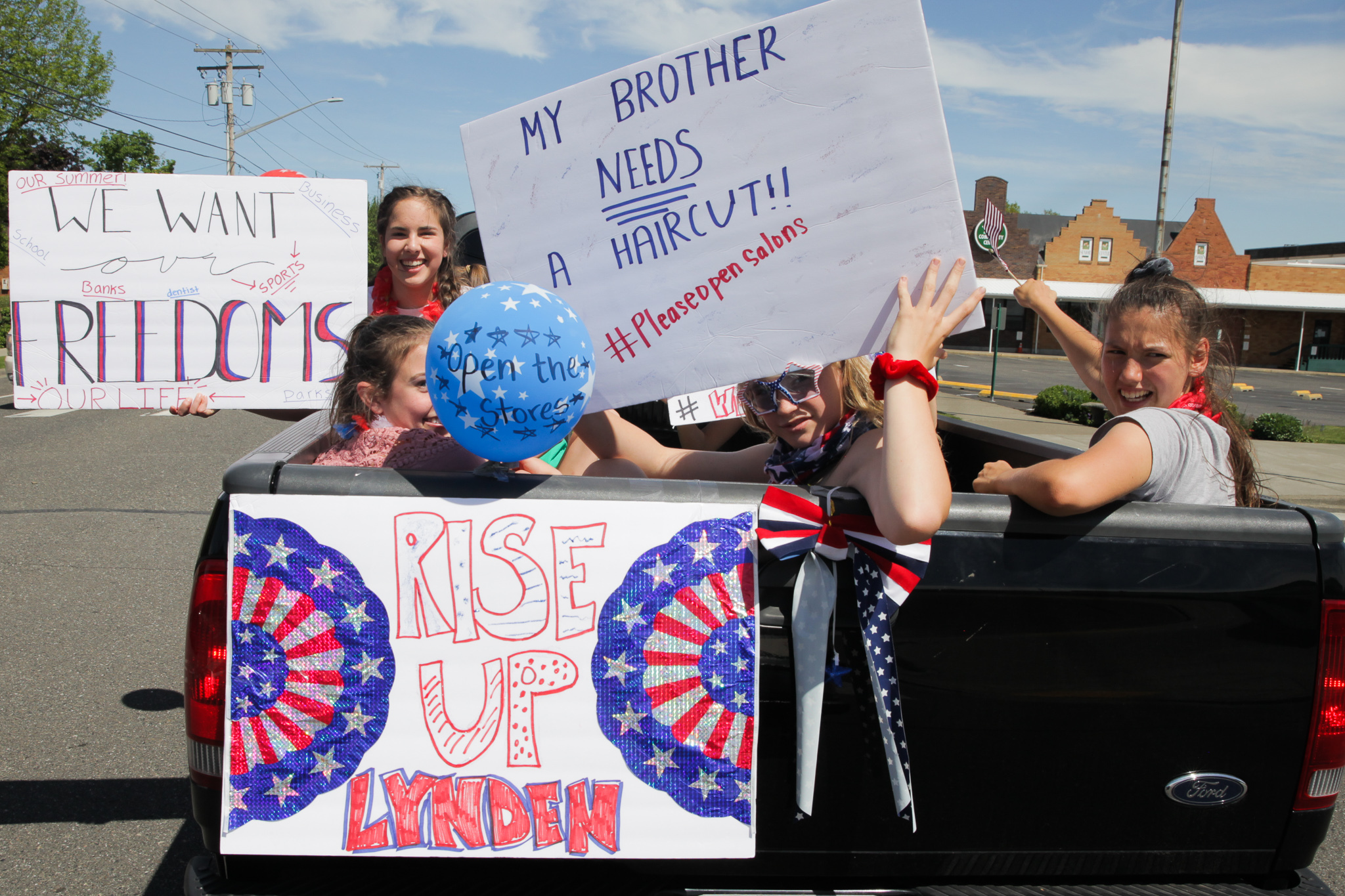 Girls ride in a truck bed during a "Freedom Parade" in Lynden, Whatcom County on May 9, 2020. Four years before during the same weekend, then presidential candidate Donald Trump visited the small Washington town for a rally in 2016. (Matt M. McKnight/Crosscut)

At a protest of several hundred people on May 1, protesters shouted, “Freedom is the cure!” and, “Are you willing to die for your freedom? Say yes!”

This rally took place east of the Cascades, far from Seattle, but it wasn’t some rural town deep in the country: It was staged at the Spokane County Courthouse, in our state’s second-largest city.

Even a newly appointed member of the Spokane Regional Health District’s Board of Health was there, contradicting current public health guidelines, doubting efficacy of face coverings, promoting use of vitamin C and encouraging the idea of hydroxychloroquine as a treatment.

Washingtonians opposing Gov. Jay Inslee’s “Stay Home, Stay Healthy” orders seemed to be growing — if not in numbers, in decibels.

When we conducted our latest Crosscut/Elway Poll to find out what Washingtonians were thinking back on April 18 to 20, 76% thought that the stay-at-home order was saving lives.

But Washington State University public policy expert Cornell Clayton told me he thought those results would be much different if we ran the poll again in May, that those protesters would represent a larger piece of the pie today.

That group seems to be overwhelmingly represented within my beat — I cover rural Washington, so I was eager to look beyond the protest signs and go to the heart of the issue. I found Julie Anderson, organizer of the Lynden “Freedom Parade,” which drew over 1,200 people, and Robert DeWayne, a quiet software analyst retiree in Walla Walla.

When I found out that both lived with high-risk family members, I was surprised, but it really drove their beliefs home. They weren’t just picking a political side. They really believed, to varying degrees and for varying reasons, that the virus was no longer a threat.

Interviewing people for this story was different. Since everyone seems to be obsessively watching the news, sources have statistics at the ready, quotes from the president and memorable social media content. The problem lies with how that information is presented. Talking with protesters, I had to corral those statistics into context, fact-check presidential quotes and find the source of those viral shares. Fact-checking signs seen in protest photographs could be an article itself.

But as 14 counties and counting are entering into Phase 2 of Inslee’s “Safe Start” plan, we may see fewer of these visceral reminders of our state’s division. Spokane has just been approved for Phase 2. The county’s public health officer has made face coverings mandatory but admitted there will be no enforcement.

The next wave of protesters holding signs may just be standing 6 feet apart, wanting those restrictions back.

This story was first published in Crosscut's Weekly newsletter. Want to hear more from reporters like Emily McCarty? Sign up for the newsletter, below.