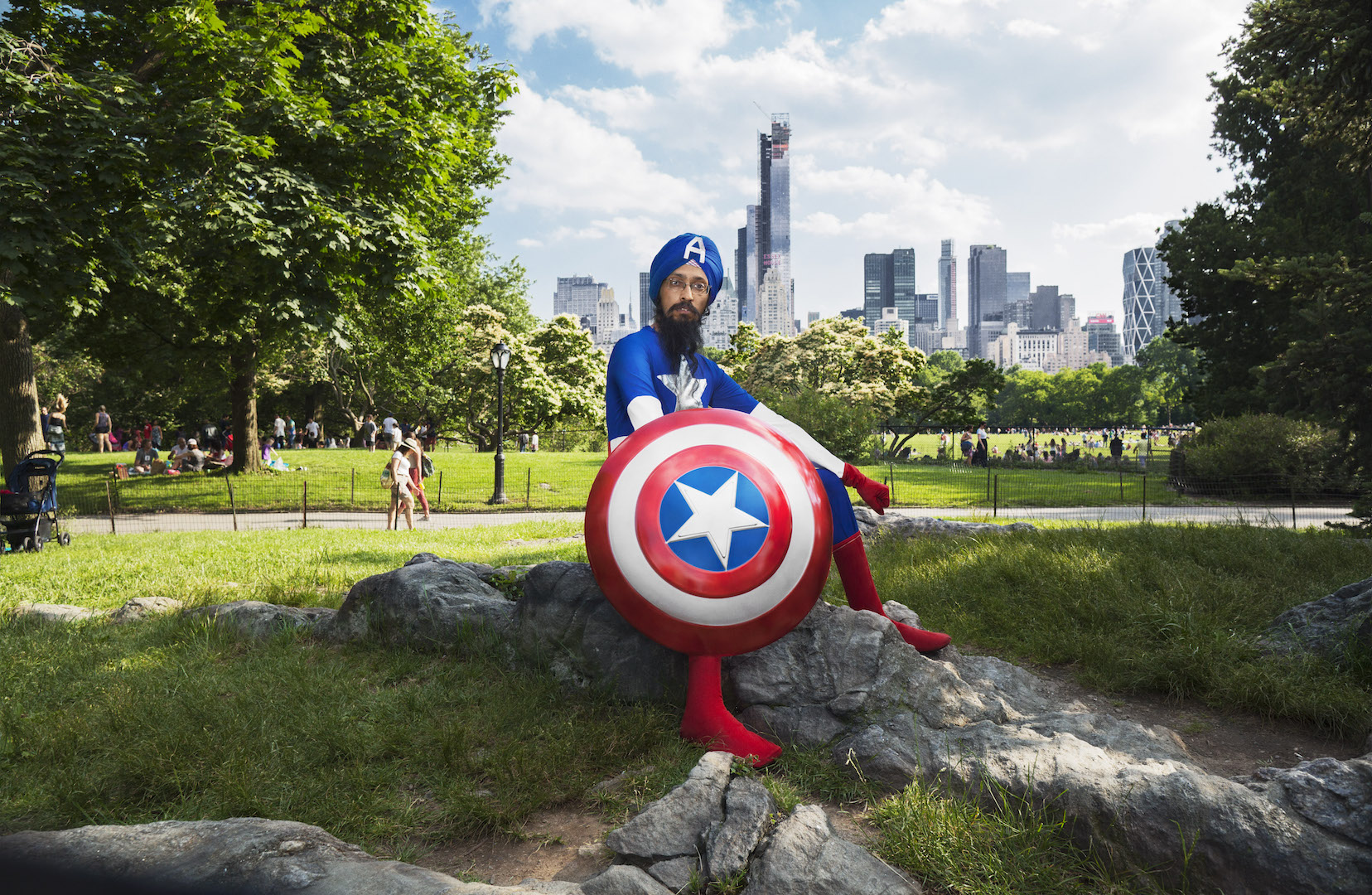 Vishavjit Singh likes to call himself an “accidental cartoonist.” He had been working for years as a software engineer on the East Coast when the 9/11 attacks happened. The devout Sikh was suddenly catapulted into a world where people went out of their way to call him" Osama bin Laden," "Taliban" and to tell him to “go home.” So he taught himself how to draw cartoons and use them to confront the hate and biases aimed at his turban and long black beard.

Almost two decades later, the 47-year-old is working as a cartoonist and public speaker full time, and was recently invited to showcase his work in his first solo museum exhibit by the Wing Luke Museum of the Asian Pacific American Experience in Seattle. His cartoons include an alternative version of Grant Wood’s American Gothic featuring two Sikhs saying they are from “freaking right here,” and a map of the U.S. covered with yellow tape with the words, “ignorance, hate, guns.” WHAM! BAM! POW! Cartoons, Turbans & Confronting Hate will be on display through late February 2019.

In the last few years, Singh has also been traveling a lot across the country to talk about diversity and inclusion at schools and companies. He also likes to dress up as Captain America to help break the ice and prompt conversations with strangers on New York City’s streets. He says it’s an important time for this type of work, given that he’s noticed a clear uptick in prejudices and hate aimed at minority groups since the election of President Donald Trump.

Singh sat down with Crosscut to discuss his new exhibit, what he hopes the Seattle community will get out of his work and the impact the current political climate has had on him. This interview has been edited and condensed.

How do you use cartoons to address the stigma faced by Sikhs in this country?

I basically use humor and sarcasm in cartoons to provoke people to rethink their perceptions and sometimes just make them smile and let their guard down.

My cartoons are full of characters with turbans and beards; mostly Sikh characters. A lot of them are formed by my own experiences, while some are figments of my imagination. And then a lot of them are inspired by news. Both good positive news and unfortunately a lot of hate and bias issues.

What is your process like in creating this work?

If someone says something mean to me, and unfortunately that happens sometimes a lot, that personal experience feeds a lot of cartoons. And then I have to ask myself, how do I put that into images.

I also use the news out there. Finding news items that are full of contradictions. Sometimes hate and bias kind of news inspires it, and sometimes Sikhs who have just done amazing things.

Why did you pick Wing Luke Museum of the Asian Pacific American Experience for your first solo exhibit?

My introduction to the Wing Luke museum happened I think 11 or 12 years ago, when they hosted one of the first extended exhibits on Sikhs in America. I sent a few cartoons and they were displayed in the exhibit. It was good to know that there was a museum doing that.

I also feel that Wing Luke is an interesting museum because there’s art here, but they also do a lot of storytelling. You get a sense that you’re learning something about a certain culture, which I thought was really cool.

What do you hope visitors will get out of your exhibit?

My hope is that some of their perceptions or misperceptions about people with turbans and beards are dispelled. I hope it answers some of their questions, but it also provokes a lot of curiosity. Maybe it will make them feel comfortable approaching Sikhs in public or at work or in school, and saying ‘Hey, by the way, I saw this exhibit and I learned a lot about Sikhs’ or ‘I have questions.’

One of the main messages I have is we are all stories, and just by looking at someone you’ll never know their stories. You’ll never know who they are until you ask them. My hope with this is people will have this sense of, I know a little bit about Sikhs, and I want to get to know them more and I have questions now.

A year and a half after Donald Trump was elected president, there have been a wide array of incidents of bigotry and hate in this country. Last year, for example in Kent, a Sikh man reported being shot in front of his house after a White man told him to go back to his own country. Have you noticed a recent rise in prejudice directed specifically at the way you look?

Unfortunately, the answer is yes. I feel certain people are more open about their prejudices and about expressing and acting on their prejudices. You just hear more and more people who feel comfortable saying ‘go back home’ to certain groups of people, or saying this nation belongs to certain ethnic groups or the demographic majority. It’s in the air. You hear it. You see it on social media.

How has this environment impacted your work?

I have been traveling in the U.S. a lot in the past two or three years. I give talks about diversity, inclusion and things that connect us. I use cartoons as my props to tell the story and I try to connect it to broader issues of race, identity, diversity and adversity.

How did you get started dressing up as Captain America?

In the summer, when I was preparing for my first New York City comic-con as an exhibitor in 2011, I thought I needed to create a banner that’s going to attract people to my booth. That year, the first Captain America movie had come out. I had this vision that Captain America should have a turban and beard, and he should fight hate and intolerance. So I created that illustration. A photographer, Fiona Aboud, came to the comic-con and mentioned in passing, ‘Maybe next year you should dress up as Captain America.’ I said no.

But the next year, the Milwaukee massacre happened at a Sikh Gurudwara, house of worship. That hit me really hard. So one hot summer day in June 2013, I stepped out in the costume with Fiona, and something weird happened. People started taking photos with me, strangers gave me hugs and I got pulled into a wedding. Suddenly people saw me with different eyes.

Why do you think cartoons, dressing up as Captain America and simply humor and sarcasm as a whole can be powerful tools to fight back against bigotry and hate?