Artist Dan Webb cleans up the South Seattle studio where he is carving giant hands into granite for the new installation, "Move Your Boulder." Photographed on Oct. 29, 2019. (Matt M. McKnight/Crosscut)

The midlife crisis has long been a punchline, but it’s no joke: Middle age is complicated. Many of us find ourselves facing circumstances so complex — whether personal, work or family — that they can seem intractable. Two choices eventually emerge: Either we double down on unhappiness and stay stuck, or pivot from everything we’re accustomed to and tackle whole new challenges.

The large-scale permanent artwork will be installed at Sound Transit’s Redmond Technology Station later this year, as part of the extensive Sound Transit Art program (STart), and in advance of the light rail extension (due to open to buses in 2020 and trains by 2023).

A Seattle-based artist since moving here from Alaska in the 1980s to pursue a bachelor of fine arts from Cornish College of the Arts, Webb has shown work locally at Greg Kucera Gallery and Bellevue Arts Museum, and nationally at the Renwick in Washington, D.C., and the New Museum of Contemporary Art in New York. He has received a Betty Bowen Award and Pollack-Krasner award, and his public artwork “Short Cut” – a series of seven miniature sculptures of people holding lightbulbs – can be seen in the Pike Street Hillclimb at Pike Place Market.

Lately, Webb has been spending Monday through Friday, 9 to 5, carving giant hands into three granite boulders, each weighing 7 to 10 tons. The hands measure between 3 and 4 feet high and are modeled on Webb’s own, with slightly bulging tendons, knobby knuckles and squared-off fingertips. While he has carved numerous hands in wood over the years, as well as feet and other body parts, this is the first time he’s used his own hands as a model.

At work in his Rainier Beach studio, he wears a heavy rubber suit and a face mask to prevent silica from the stone from getting into his lungs. A faint milky dust hovers in the air as rock is ground down. Every so often a compressor blasts a loud hissing sound, shooting off steam.

“They are my hands for a reason. Moving your boulder is a very personal subject and everybody’s got a boulder to move. It’s very literal,” Webb says.

Primarily a wood carver for decades, Webb decided to try his hand at stone carving at the urging of friends and fellow Seattle artists Annie Han and Dan Mihalyo of Lead Pencil Studio. The duo’s recently completed “Transforest” (the blue ombré mash-up of a Douglas fir tree and electrical tower at the new Denny Substation) is the tallest piece of public art in Seattle.

“It made perfect sense for Dan [Webb] to tackle granite as a medium, since he had so mastered the techniques of incremental removal in wood,” Han and Mihalyo wrote in an email. “He's worked the granite like a woodpecker to a tree with inspiring energy and determination.”

Webb’s process of mapping his own hand onto the boulders is based on techniques used by stone carvers through the ages. He constructed two “machines,” which are basically wooden frames equipped with levels and rulers. One is a 1-foot-high maquette that frames a cast model of his hand and is marked with numbers 1 to 100. The numbers denote major anchor points for the features of his hand, such as the tips of his fingernails, knuckles and veins. The other is a 4-foot-high “pointing machine” that helps Webb translate the dimensions to a larger scale and onto the boulder. As he works he refers to his “bible,” a small notebook with the mapped dimensions.

Every time he talks about his shift from wood to stone — and working on a much larger scale — Webb expresses dismay that he’d never thought of carving stone sooner.

“Stone carving requires a studio with equipment that facilitates it — one with a drainage ditch, heavy machinery and a crane to move rocks,” Webb explains. “It didn’t feel possible for me to tool up to that scale. It was always tantalizing out of reach.” When Sound Transit reached out, the agency offered him a budget big enough to make stone carving feasible. “As soon as I said yes to Sound Transit,” he says, “I found a studio that was what I needed to scale up in an even bigger way than I initially imagined. I challenged myself to jump off a cliff and grow wings on the way down.”

Webb has taken over a corner of Seattle stone sculptor Ken Barnes’ custom-built stone-carving facility in Rainier Valley. He rents a portion of the 2,300 square-foot space, which houses Barnes’ stone-carving studio on one end and a painting studio (for Barnes’ wife, Adele Eustis) on the other. The space has 26-foot-high ceilings at its highest point and accommodates a 20-ton Gantry crane — helpful when it comes to moving boulders.

It was Barnes who told Webb about Kangley Rock & Recycle, an open-pit mine in Ravensdale, outside of Maple Valley. Kangley’s primary business is gravel, but when employees come across a large rock they have no use for, they pluck it out and set it alongside the pit. After learning about the pit, Webb spent days hunting among the boulders to find the ones that spoke to him. He says the workers there were intrigued to learn about his plans for the rocks and were patient as he considered one after another to find boulders the right color and size.

The boulders in Webb’s personal life aren’t unique, but they are particular to him. He’s dealing with hard stuff, starting to address some things from childhood in therapy and questioning the next phase of his art career. And, at 54, he’s thinking a lot about his legacy as an artist.

“I like the unreasonable ambition of it, the idea that you would try to move your boulder,” Webb says. “Maybe you can move your boulder. And maybe you have to adjust your idea of what a boulder is down to the level that you can actually move it. It’s not only a physical thing but an attitudinal and emotional thing.”

Granite is one of the hardest stones to carve. Webb took one stone-carving class at Pratt Fine Arts Center, where he practiced various tools and techniques on a single stone. He left his practice rock behind at Pratt and immediately moved on to the boulders.

To avoid nerve damage that can result from hitting stone with metal, Webb is pacing himself. STart Program Manager Kurt Kiefer, once a stone carver himself, coached Webb on how to avoid injuries common to the art form. Webb uses a saw for the larger cuts, making cross hatches that can be tamped out with one hit. For the finer work, he uses dremels and hammers, one of which Kiefer gave him.

“The first month was super hard physically until I got used to it,” Webb says. “I’m ambidextrous with the hammer from wood carving, so I’m able to carve both sides of a block. With stone, the hammers are heavier and the material that you’re moving is more resistant.” He says he “adjusted his clock” and went slowly.

In the process, Webb thought a lot about who the Redmond Technology Station’s typical users will be — it’s across the street from Microsoft — and the connection of this ancient art form with technology.

“We think of technology now as smartphones and virtual reality goggles,” Webb says. “But the bronze plow is technology, making terraced fields so your soil doesn't erode is technology, carving a stone for the keyhole in an arch is technology. Technology has always been with us.”

In early discussions about “Move Your Boulder,” Webb agreed that the title spoke to the meaning — the hands are pushing the boulders out of the way. But over the last year, he has shifted his perspective. “One way to read the piece,” he now says, “is that the hands are not pushing them but shaping them.”

It’s a perspective that might only come with middle age. “I always feel like the work is the most reliable open book version of who I am. There’s no question that there’s boulders in my life and I want to move them,” Webb says. “There’s very little I can do in the face of those boulders, except try and adjust my attitude about what success looks like, and to think creatively about what it means.” 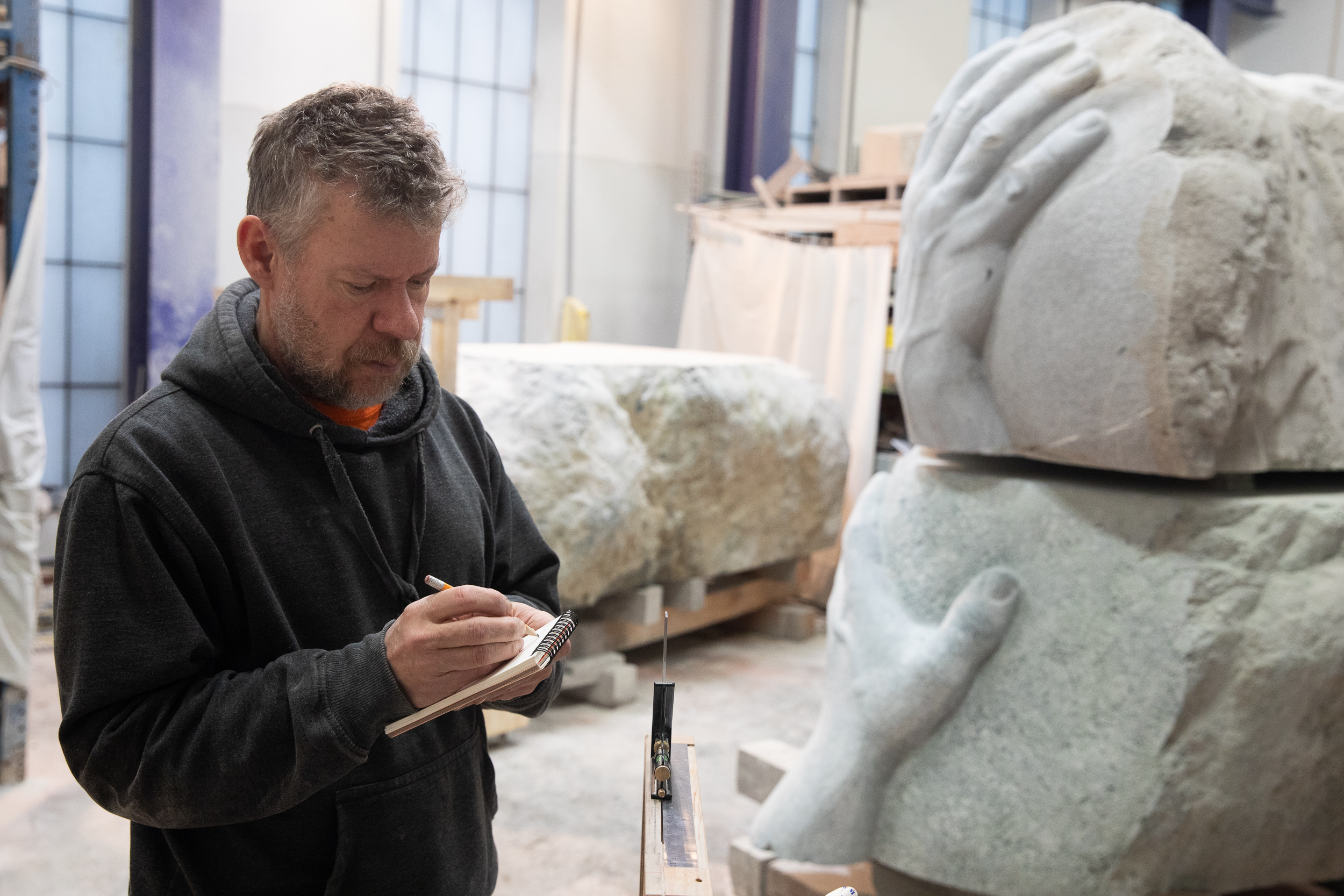 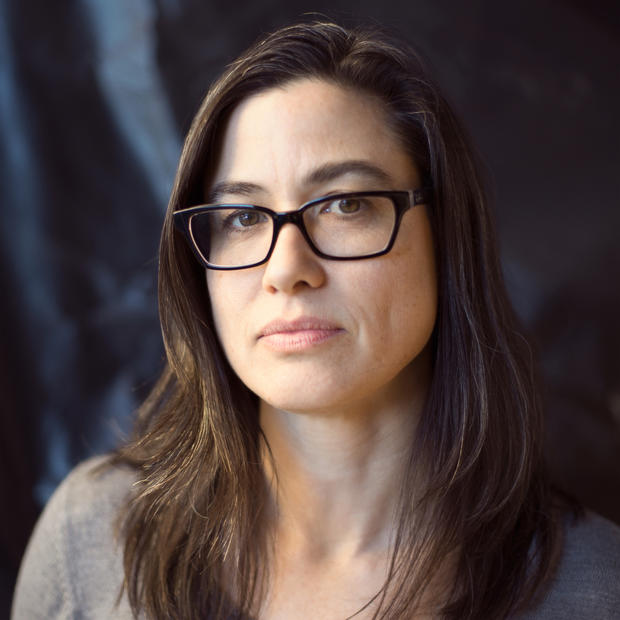 Katie Kurtz is a freelance writer in Seattle. She is currently working on a true crime investigation.