The Seattle actor leads the Tony-nominated play about a gay student in an upscale Black prep school. 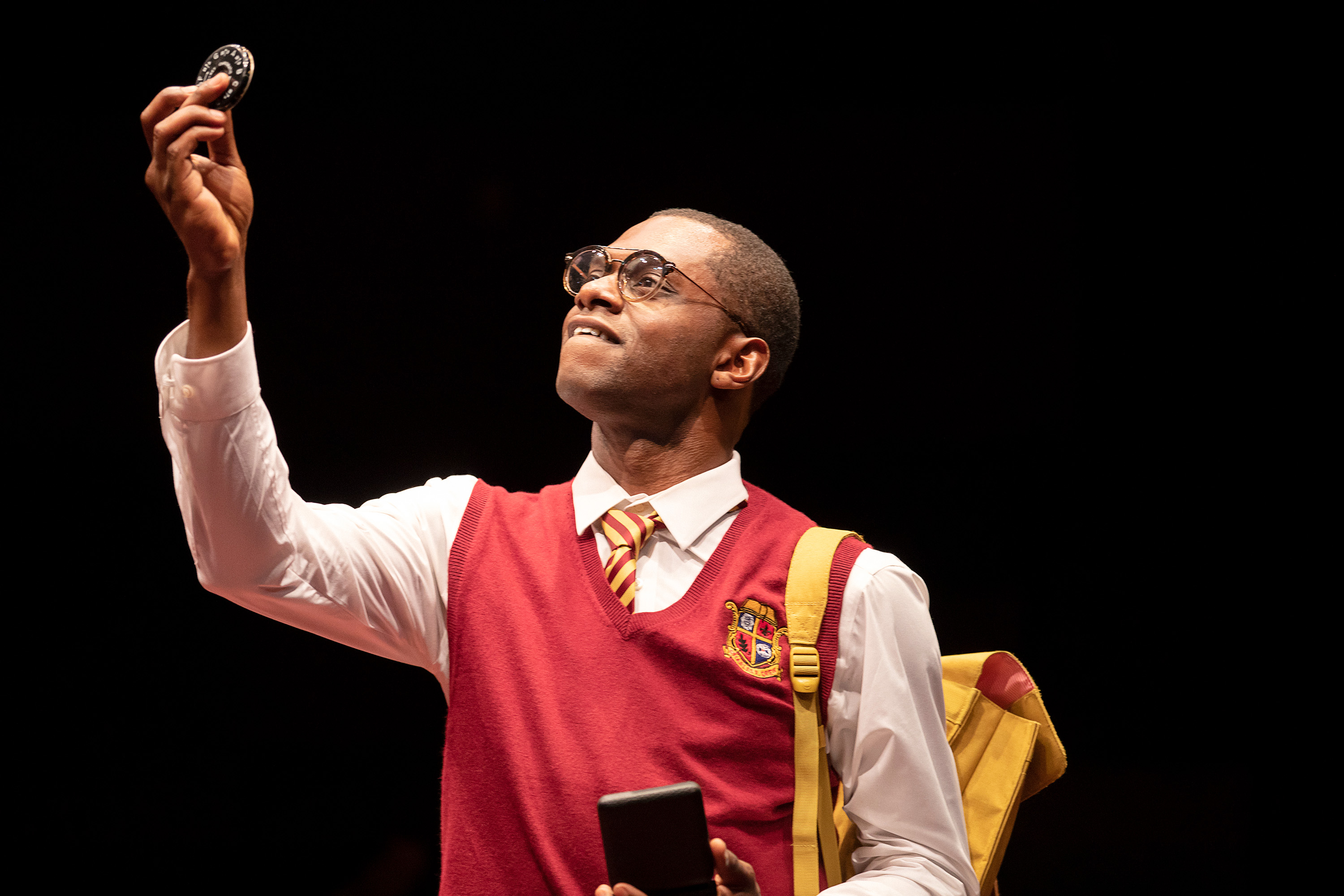 In the opening scene, the teenaged Pharus leads the a cappella chorus of an elite Black male prep academy in a rendition of the school anthem, “Trust and Obey.” Bernard’s vocal on this beloved gospel hymn soars forth in the show’s Seattle premiere, jointly produced by A Contemporary Theatre (ACT) and The 5th Avenue Theatre, while onstage another schoolboy in the choir whispers homophobic slurs at Pharus.

It is not just an angelic tenor that Bernard brings to this coveted part — an exuberant, talented scholarship student some classmates mock as a “sissy.” He also contributes the polished acting and dancing skills that have made him an in-demand performer at Seattle theaters since his move here from the East Coast in 2017.

But beyond performance chops is Bernard’s empathy for Pharus and close identification with him, both of which help the audience at ACT empathize with this embattled adolescent — and (like the school’s conflicted headmaster, played by Arlando Smith) make us hope he can mature into adulthood with his gifts and spirit intact.

“He really is me, honestly,” says the congenial 31-year-old. “I spent all 12 years of my pre-college education in Catholic schools. I was the scholarship kid, that kid who got the lead in the school musical. I was the kid who was prancing around the place with his friends. I was very much Pharus.”

Jamil Jude, the show’s director, picked up on the affinity between actor and part quickly. What struck him most initially about Bernard? “His vulnerability. His willingness to give himself up into the character,” Jude answers. “Nicholas really feels an alignment with Pharus’s story.”

That story is enriched by the cross-dynamics of several other meaningful characters at Charles R. Drew Prep, a school named after a famed physician and scientist and devoted to molding young Black men into high achievers. There’s the headmaster’s troublemaking nephew Bobby (Jarron A. Williams). And AJ (Kyle Ward), Pharus’s roommate and perhaps only friend. And Mr. Pendleton (Larry Paulsen), a gently provocative teacher. One of the most vulnerable figures is Pharus’s former roommate David (Brandon G. Stalling), whose conservative religious upbringing and desire to be a minister don’t square with his deep-seated longings.

Due to the pandemic, Bernard’s route to the central role — and ACT’s path to producing Choir Boy — was a long one. But that also meant a lucky break for this ambitious Rochester, N.Y., native, who has kickstarted his career in Seattle. 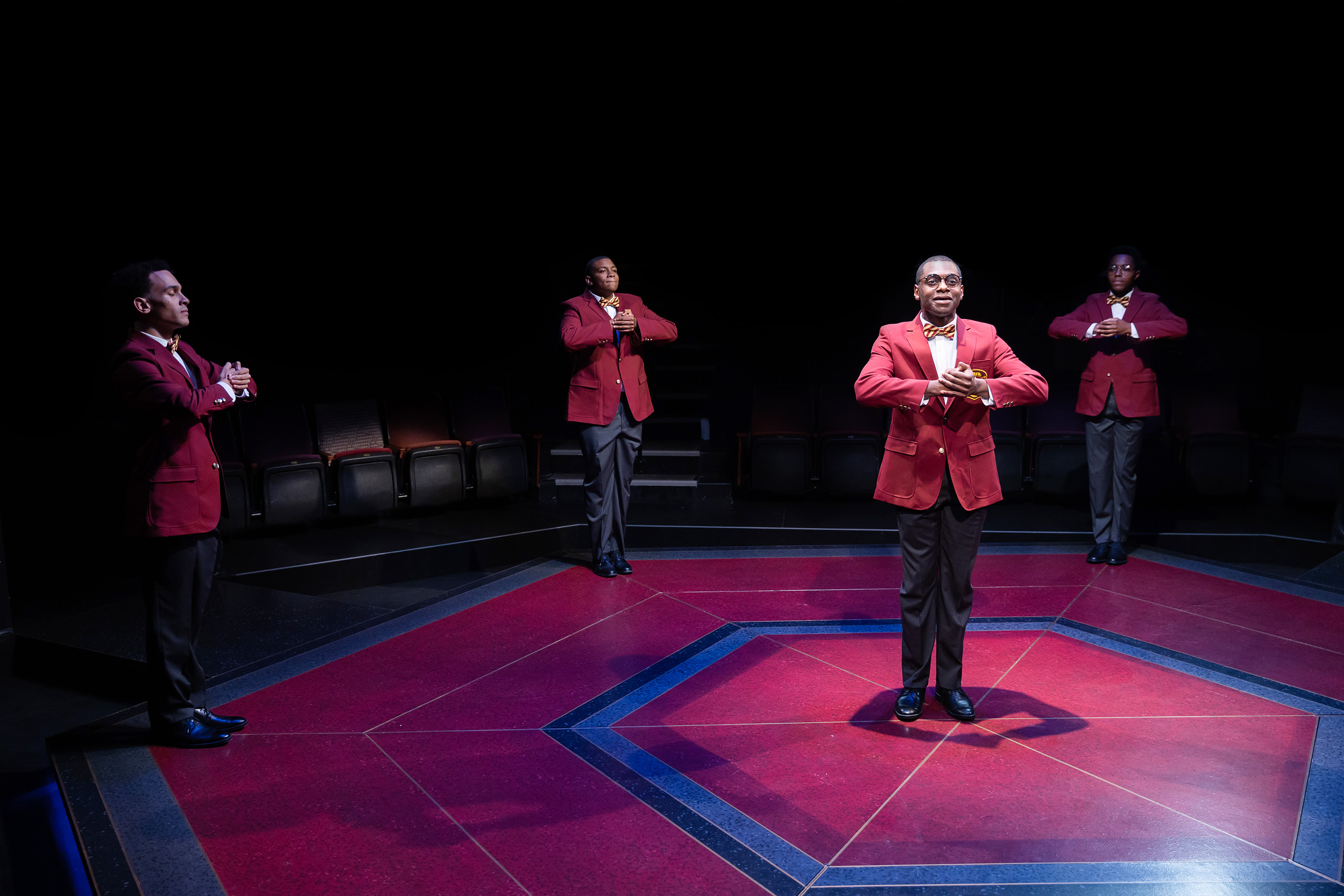 Bernard and other cast members in Choir Boy. (Courtesy of Mark Kitaoka/ACT)

Bernard and other cast members in Choir Boy. (Courtesy of Mark Kitaoka/ACT)

Rife with Black gospel and pop music and blasted with outbursts of dance, friction and tenderness, Choir Boy premiered in London four years before its author McCraney won a 2017 Academy Award for scripting Moonlight, Barry Jenkins’ sensitive indie film and the recipient of a Best Picture Oscar.

But McCraney’s unique perspective was apparent to Seattle theatergoers well before that. He wrote one of the three one-acts that composed The Breach, a trilogy set in New Orleans against the backdrop of Hurricane Katrina, which played at Seattle Rep in 2005. And in 2011 the Seattle Rep staged his fierce sibling drama The Brothers Size.

Choir Boy continues McCraney’s urgent yet lyrical exploration of the complicated passage from Black boyhood into manhood. (So does his recent TV series for the OWN Network, David Makes Man, based loosely on the writer’s Florida youth.)

Bernard finds the theme particularly resonant. “A big thing in the play is how Black boys don’t get to be little boys,” he says. “Like they’re seen as adults, which is one of the reasons you get cops saying they’re afraid of Black 13-year-olds, because they happen to be six feet tall already.

“For me, on top of that, us queer kids have to grow up so much earlier because of people thinking you’re all grown up because you’re gay. They immediately sexualize you, when, really, you’re still just a kid.”

As a queer, Black and highly expressive adolescent, Bernard was the first in his family to go to a private high school (and later to college). “That relationship with the headmaster in the play gave me so many memories of hanging out in my English teacher’s classroom during free period, just talking about all the school gossip, but also getting reprimanded for how I was behaving in class.”

“Like Pharus, I had a mouth on me,” he notes, “and sometimes got told I was out of line.”

Bernard’s first love in high school was dance, which he went on to study at the State University of New York at Fredonia. But after obtaining an undergrad degree in the subject, his path was derailed for a while due to illness. “I had a malignant tumor on my adrenal gland,” he explains. Though successfully treated for cancer, he suffered powerful negative side effects from the beta-blocker drugs used to treat his condition — including extreme swelling and a weight gain of about 100 pounds, as well as lasting damage to one foot. (You would never know it from watching him dance in Choir Boy.)

“I don’t mind talking about my disability,” he says. “In fact, I like to, because I’m proud of the way I dealt with it.”

Once the swelling subsided and he recovered, Bernard decided a “concert dance career” was unlikely, but theater was a good fallback. After his Rochester friend Jay O’Leary Woods moved to Seattle to work as an actor and director, she urged him to apply for Intiman Theatre’s Emerging Artists program. He got in, devised a short solo theater piece and immediately found gigs around town — at such companies as ArtsWest, Seattle Rep and Book-It Repertory Theatre. Given his talent, training and experience, he arrived at an especially opportune time for actors of color, as local theater companies have pledged to adopt more equitable and inclusive casting in their shows.

Stage work became scarce during the pandemic, but Bernard stuck it out in town. And this year he had a plum assignment in The 5th Avenue’s mounting of the Disney musical Beauty and the Beast. (He tackled the role of Maître D’/candelabra Lumière.)

Now he’s become such a booster of the city he’s featured in a video tour of Seattle produced by tourism organization Visit Seattle. 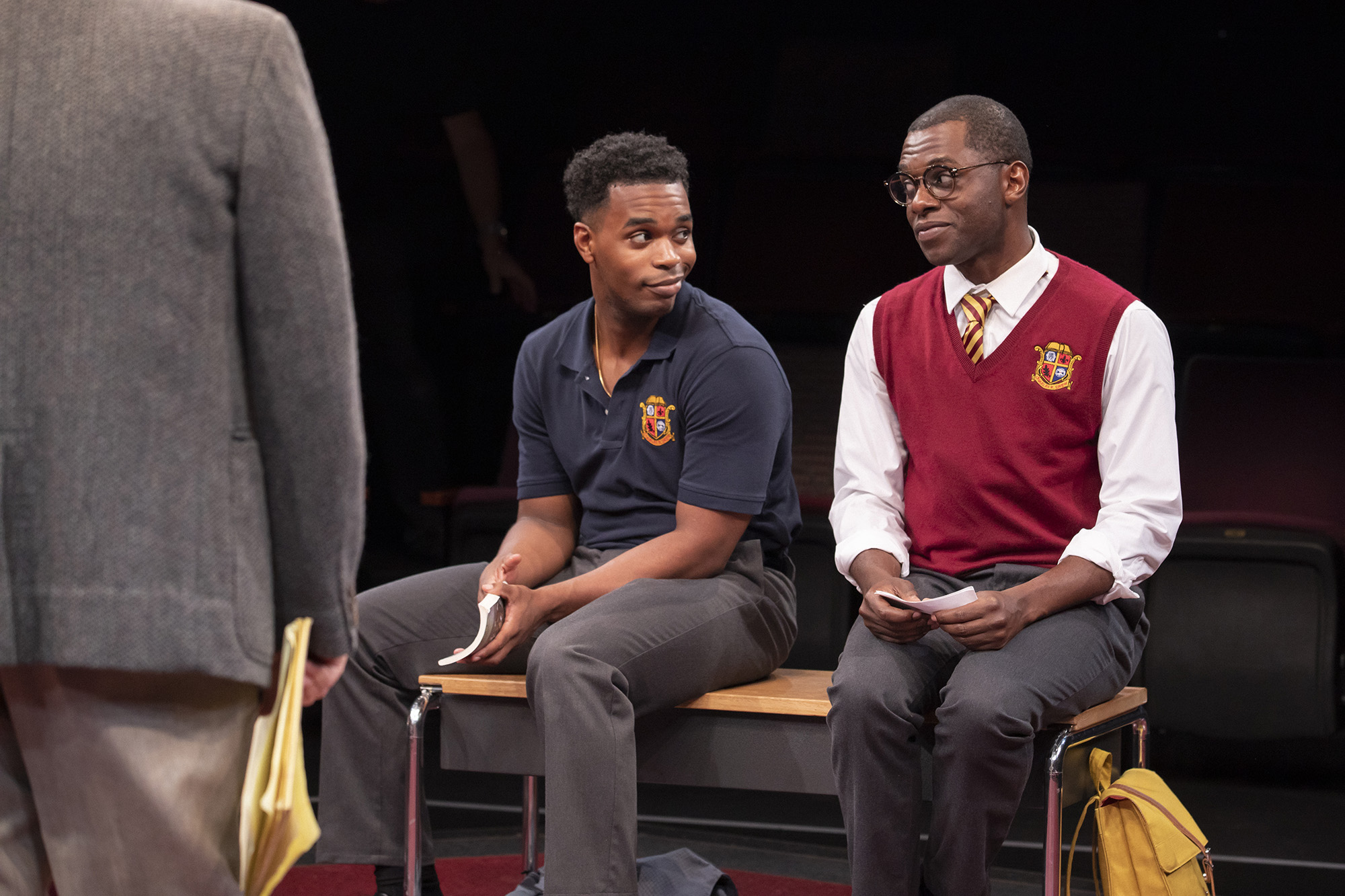 Bernard as Pharus, right, and Kyle Ward as AJ in Choir Boy, running through October 23 at ACT. (Courtesy of Tracy Martin/ACT)

Bernard as Pharus, right, and Kyle Ward as AJ in Choir Boy, running through October 23 at ACT. (Courtesy of Tracy Martin/ACT)

Choir Boy was initially slated to be a 2020 co-production of ACT and the Denver Center Theatre in Colorado, following the success of the play on Broadway in 2019. (It was nominated for five Tony Awards, winning for best sound design and outstanding musical arrangements.) It has since been performed (or is scheduled) at many theaters around the country.

Jamil Jude had assistant-directed an earlier draft of the play at the Guthrie Theatre in Minneapolis. But while preparing the 2020 Denver/Seattle run of Choir Boy, the pandemic shut that production down. Then ACT decided to do its own version (the Denver staging ran earlier this year), and Bernard was tapped for the lead. He admits his earlier audition hadn’t been great, so “this time I prepped and prepped and prepped for it.”

“It was pretty apparent he was the best choice,” says ACT artistic head John Langs. “Nicholas is incredibly charismatic. And not only is his singing gorgeous, it comes from a very deep place inside of him.”

Though he strongly identifies with Pharus, Bernard emphasizes he is portraying a part. “The challenge for me in this is that it’s so close to my life, I have to be very clear about putting a wall between Pharus and myself,” he explains. “It’s not about me feeling it, y’all. It’s about the audience thinking I feel it.”

To work with Bernard and the rest of the cast, ACT hired not only a choreographer (Juel D. Lane) but also an intimacy director (Kaja Dunn) to help with sensitive staging — particularly intimate moments in two shower scenes, which include partial and full nudity.

Bernard says his way into the role of Pharus was “through my body, because of my background as a dancer. A lot of actors start in their heads and then they have to get into their body. For me it’s in the opposite.”

Jude appreciated that approach, as well as Bernard’s flexibility about trying different things in rehearsal. “His willingness to get in there, to change up, is great. You want actors who make strong choices, but who aren’t so married to their initial choices that they can’t make adjustments.”

Choir Boy runs through October 23, but theatergoers will be seeing more of Bernard’s work in the 2022-23 season. He is understudying the part of The Scarecrow in The 5th Avenue Theatre’s upcoming version of The Wiz (opening in November), and will be assistant-directing the Stephen Sondheim musical Into the Woods, also at the 5th Avenue, early next year.

When time allows, he’s writing, “jumbling around” with scripts, TV pilots and plays. And at least for the near future, he’s committed to Seattle. “I’d love to have this be a home-base situation,” he says. Fellow locally based actor/singer/writer Sara Porkalob is a role model: Her “Dragon Lady” series of autobiographical plays began in Seattle and reaped raves in Boston, and now she is performing in a revival of the musical 1776 on Broadway.

“I’d love to do what I want to here, and then take it to other places,” Bernard says. (“And the next thing you know you’re on Broadway!” he jokes.) But he also recognizes the opportunities he has in a smaller theatrical pond. “Seattle has spoiled me. I’ve done too much work here to go somewhere else and have to be asking people, ‘Paper or plastic?’” 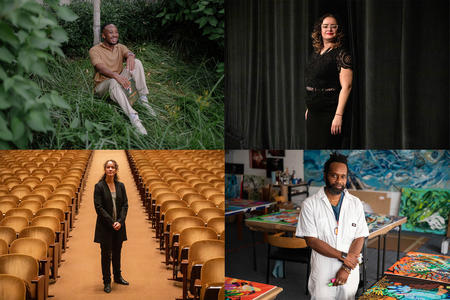 Moses Sun, Angelique Poteat, Ana María Campoy and Luther Hughes will be making a splash in the city’s arts scene this fall.

Moses Sun, Angelique Poteat, Ana María Campoy and Luther Hughes will be making a splash in the city’s arts scene this fall.