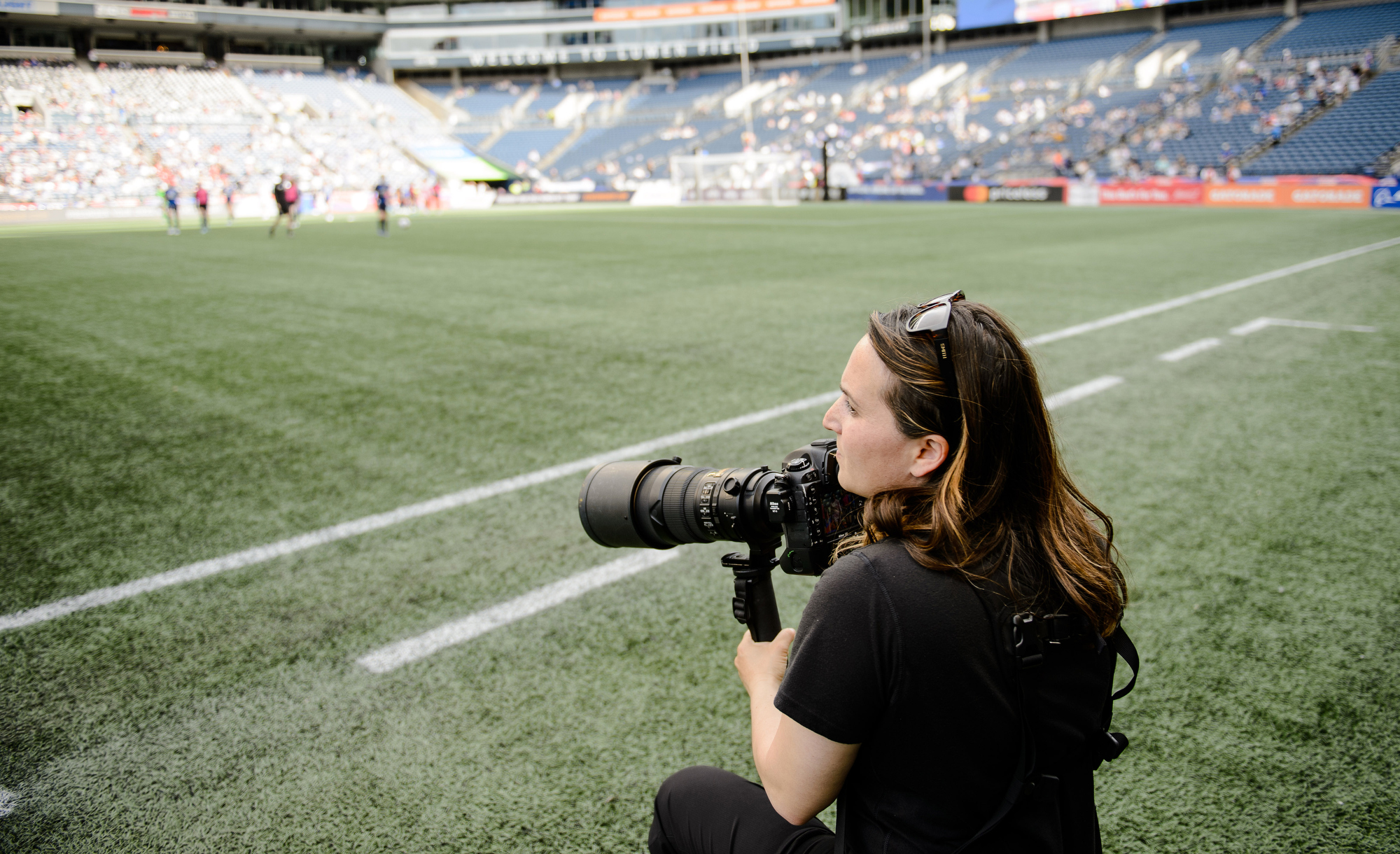 Jane Gershovich has been a photographer with the Seattle Reign since the team’s founding in 2013. She’s witnessed the ups and downs of the sport over the past decade and watched the team grow into the NWSL powerhouse they are today. (Courtesy of Jane Gershovich)

Jane Gershovich started playing soccer when she was a kid. But it wasn’t until she was on her high school soccer team in Bellevue that she even considered what it would be like to go pro. At the time, she says, there wasn’t a clear pathway to the professional leagues, so making the game she loved into a career “wasn’t on the radar.”

Joining an expensive club team may have helped her toward that dream, but access was out of reach. Despite this, she continued playing soccer recreationally, switching between offense and defense, while attending Western Washington University in Bellingham. She recalled being one of two women to play pick-up games.

During this time, Gershovich focused her college years on developing her eye for photography, including serving as photo editor for The Planet, the college’s environmental magazine. After graduating into the Great Recession, she began assisting a wedding-photography business to learn the ropes. When the Seattle Sounders began playing for Major League Soccer in 2009, she brought two passions together and started photographing matches for a now-defunct sports blog that she started with friends. (At the time, “they weren’t strict about media credentials,” she says now, laughing.)

Over the next two years, she photographed her first Seahawks game and documented Sounders matches for MyNorthwest.com. With help from team connections, Gershovich landed a job shooting photos for the Seattle Sounders Women amateur league team in 2012. When the Seattle Reign FC launched as one of eight inaugural teams in the National Women’s Soccer League in 2013, she joined the organization as a photographer.

Nearly a decade later, she is still with the team, now called OL Reign. As one of five people who has been with the team for its entire history – alongside defender Lauren Barnes, midfielder Jess Fishlock, winger Megan Rapinoe and assistant coach Sam Laity – she has seen the Reign grow, evolve and navigate numerous challenges.

“I played [soccer] with all my heart until I wasn't able to anymore physically,” she says. “Then to be a documenter of the sport that I love, to be an advocate of women’s soccer ... I'm just so frickin' lucky.”

Gershovich has seen the team move among four home stadiums, win three NWSL Shield awards and undergo multiple name changes. What she has never witnessed is an NWSL Championship win for the team. That could change very soon, as the team begins play in the semifinal round of the league playoffs on Sunday at Lumen Field. Winning that match against the Kansas City Current would be followed by a trip to Washington, D.C., to play in the final.

Gershovich will be stalking the sidelines on Sunday and, if the team wins, she will likely travel with them to D.C. The farthest she’s traveled to photograph a Reign match is Portland, as the team travels only with essential management staff. Gershovich hopes to see that change as the team and its league gain recognition. 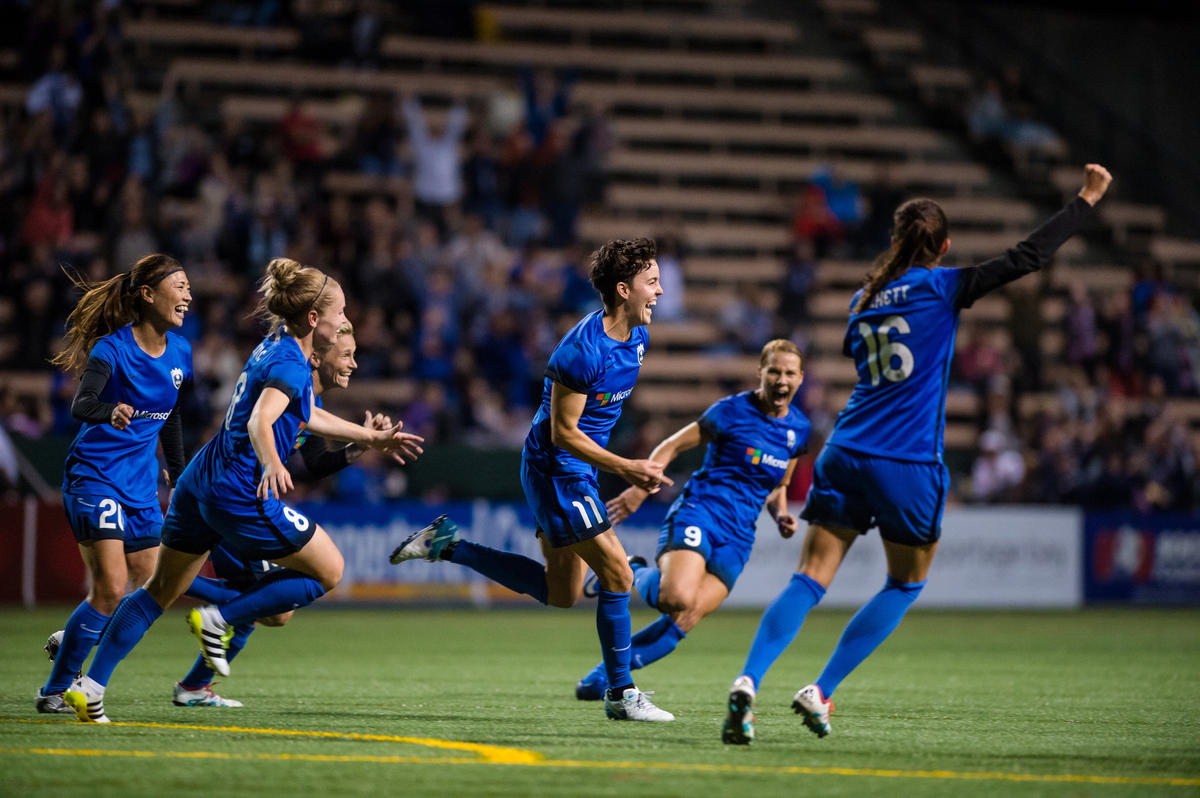 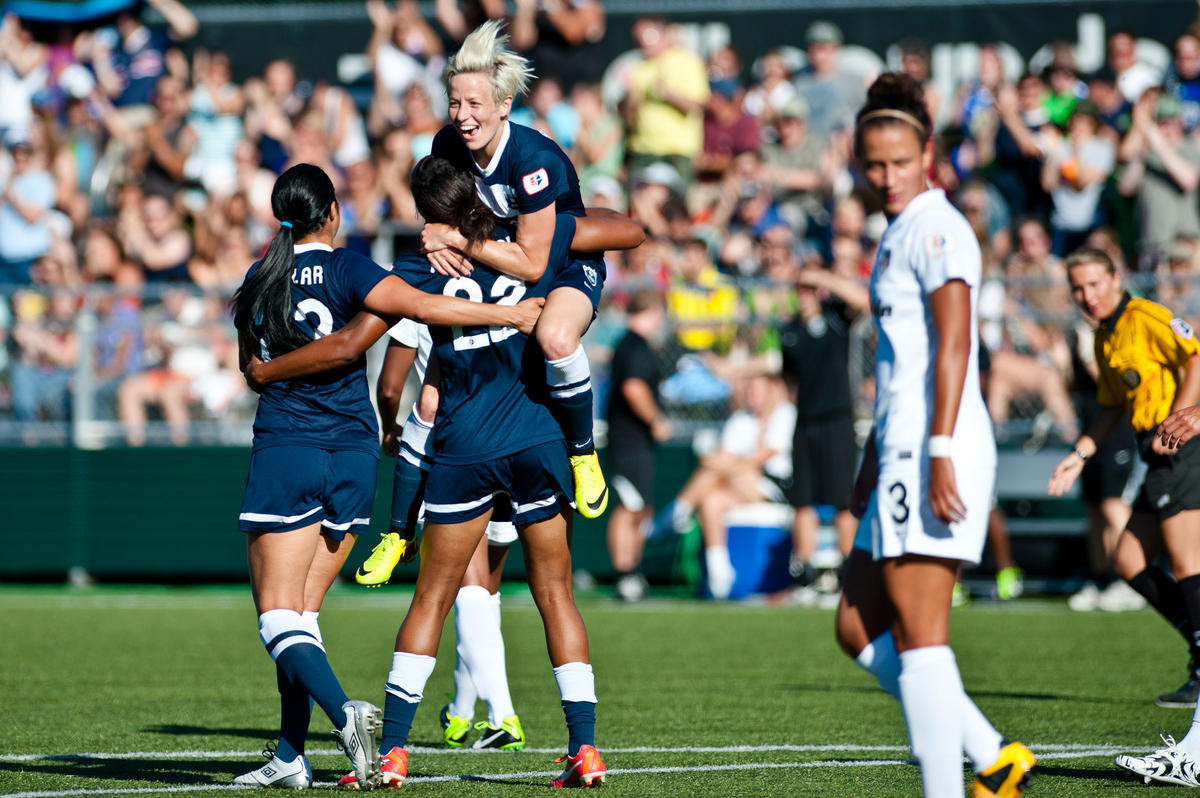 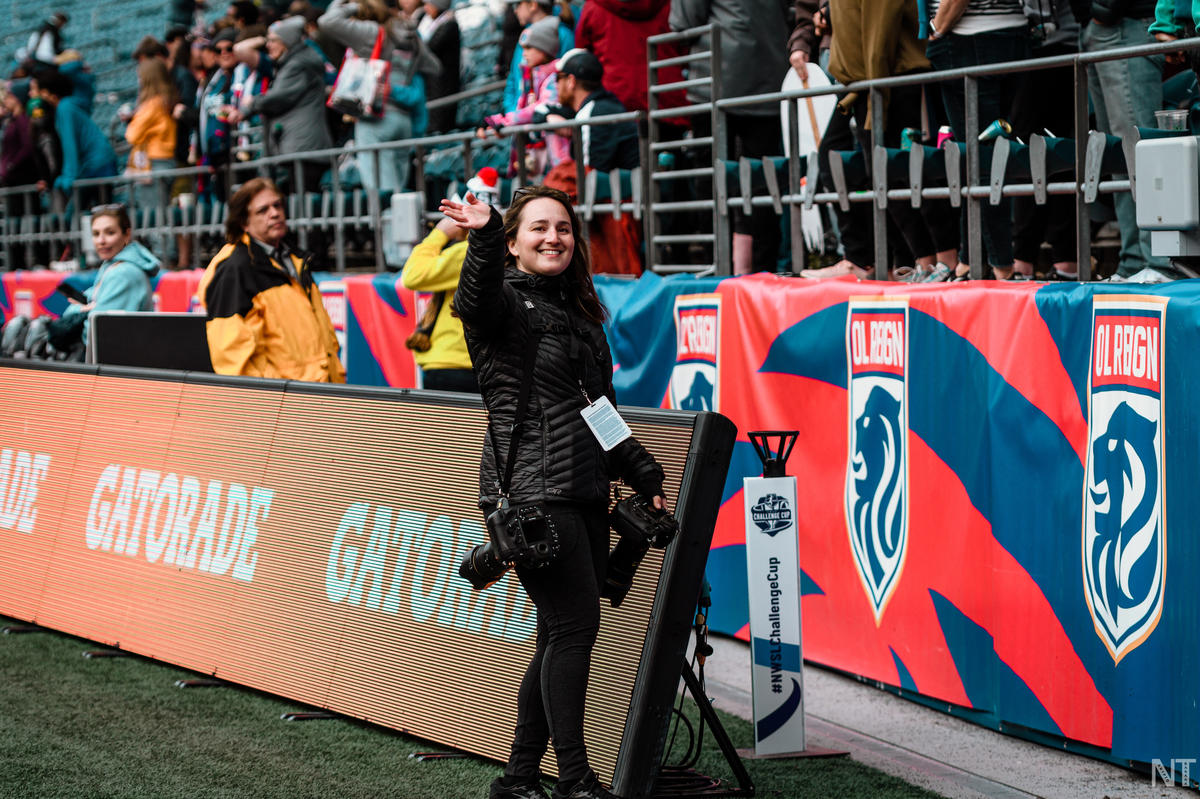 Jane Gershovich waves from the sideline at Lumen Field during an OL Reign game in 2022. (Courtesy of Nikita Taparia)

Jane Gershovich waves from the sideline at Lumen Field during an OL Reign game in 2022. (Courtesy of Nikita Taparia)

If you’ve seen photos of the Reign on social media or at Lumen Field, you’ve likely seen Gershovich’s photographs. Her work captures the games’ kineticism while also offering fans a more intimate look at the nuance and emotion at play on the pitch and sometimes taking them behind the scenes.

“I think people overlook the importance of photographers,” says defender Lauren Barnes. “[She] basically represents who we are. ... From year one to year 10, you can see how important visibility is for women's sports in particular.”

Although she isn’t running drills alongside the team, Barnes says Gershovich’s background as a player has made her a fierce advocate for the Reign and its mission in the sports industry.

“She understands the grind and what we're going through,” Barnes says. “There's that extra connection. You totally see it in our photos, the way she interacts with us and how she wants to help push us forward."

Among Gershovich’s greatest memories are photographing Scottish star midfielder Kim Little during her first matches with the Reign in 2014. She is deeply proud of the team for overcoming multiple injuries and adversity to qualify for the NWSL’s 2019 playoffs. And she fondly recalls the “explosive energy” when the Reign won the NWSL Shield, given to the team that tops the regular-season standings, in 2014, 2015 and 2022. (Memorable, but less exciting for Gershovich: Ignoring her soon-to-be husband’s protests about checking the team’s 2014 championship score ahead of taking wedding photos. The team lost 1-2 to Kansas City.)

Gershovich has also been a keen observer of events off the field. She was there when Rapinoe joined the Women’s National Soccer Team’s federal pay-equity complaint against U.S. Soccer in 2016 — and celebrated when the case settled for $24 million this past February. And she was documenting the team when former head coach Farid Benstiti was asked to resign last summer following a player’s allegations that he made inappropriate comments about team members’ health. (Gershovich commended Rapinoe’s leadership through the situation, but otherwise declined to comment.) 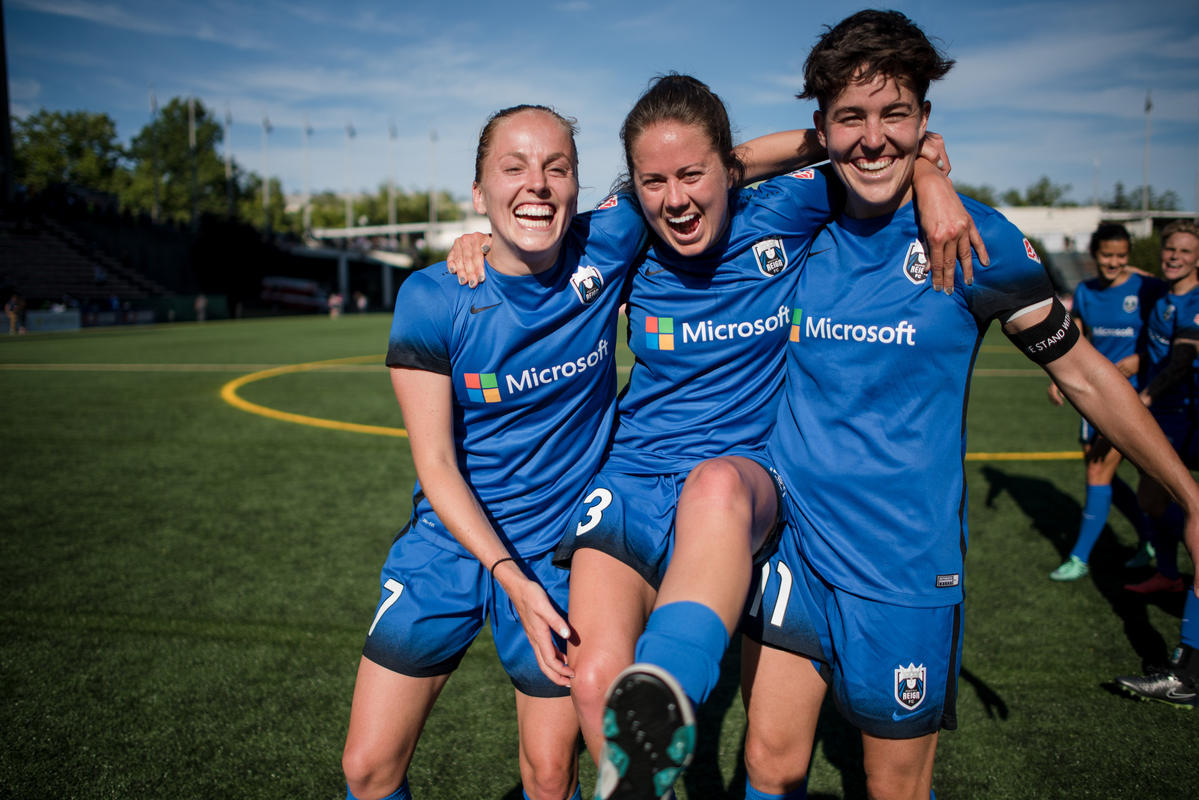 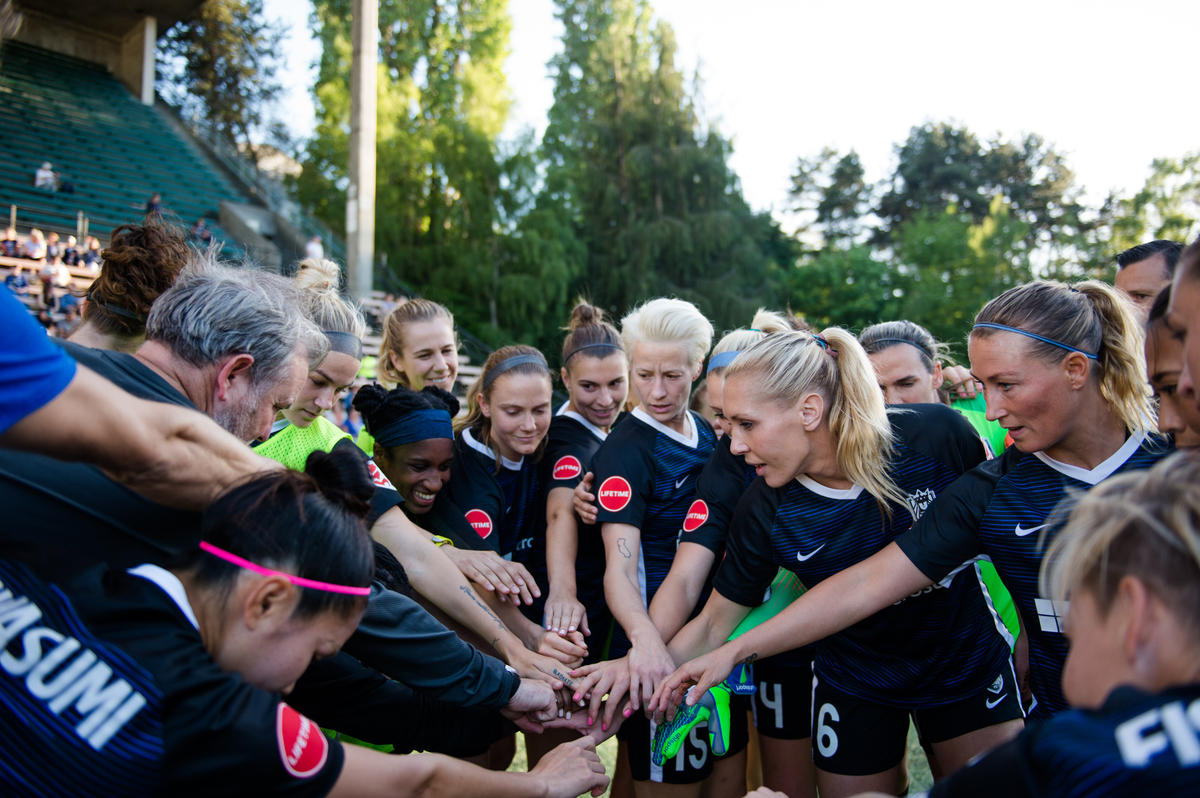 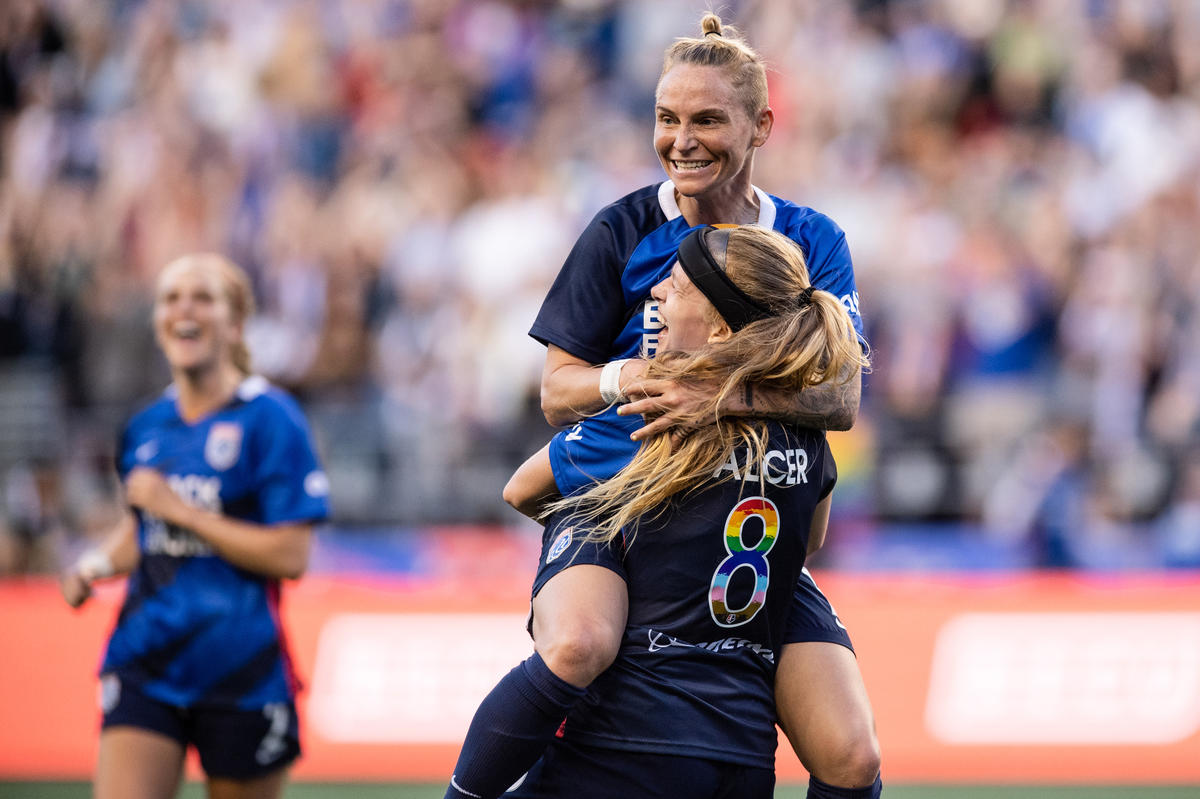 This year, Gershovich celebrated with the Reign as they kicked off their first season playing at Lumen Field, the largest stadium in Washington state. Although the team is proud of its roots at Starfire Sports in Tukwila and at Memorial Stadium in Seattle Center, she says, playing at Lumen Field has been a long time coming.

Gershovich said playing on the Lumen pitch holds extra-special meaning for lifelong Washingtonians like herself, defender Sam Hiatt and midfielders Nikki Stanton and Olivia Van der Jagt. For this group of locals, it means running on the same field as their favorite teams.

It is also familiar terrain for Gershovich. As a photographer for Seattle Sounders FC and the Seahawks in addition to the Reign, she said she feels at home at the stadium.

When she’s working for the men’s teams, Gershovich is one member of a team that includes up to four additional photographers. With the Reign, she is often a one-woman photo crew. Her approach to the game changes without backup shooters. She must station herself in a place on the sidelines where she won’t avoid missing a pivotal moment and then be prepared to run to where the action is.

Without a full-time backup photographer, Gershovich carries the full weight of responsibility to document the thrill and the agony of the game.

“You're so knee-deep in their emotions [during] the game or in training. You see it all. It’s hard for it to not affect you,” says Gershovich, a self-identified empath. “I see the tension in their faces, I see their expression and it hits me. I take a lot of it in. I think it's what makes me care so much.”

Gershovich has also kept an eye on the stands, where she has seen the Reign’s fan base grow in recent years, with an average of nearly 7,000 people in the stands for single games this past season compared to an average of over 5,000 in 2019 following the U.S. Women’s National Team’s win at the FIFA Women's World Cup. The team broke its attendance record for single matches held in Seattle three times this season, topping out at 10,746 fans at their Oct. 1 match against the Orlando Pride.

Gershovich said she would love to eventually see the same support the Reign saw during last summer’s double-header with the Sounders, in which both teams played their Portland rivals. There were over 27,000 fans in the stands for that match.

“I probably cried somewhere in the stadium because I just didn't expect that many people,” she says.

Over the decade since she started photographing professional sports, Gershovich is “proud to look around the country and see more women covering the NFL and MLS.” She also sees her role as a way to advocate for equity issues in sports.

“My goal with the Reign, especially when I got to be more comfortable as a photographer, is to amplify these players’ voices,” she says.

Gershovich wants to see the region keep up that momentum. Like the collective excitement for the Mariners’ playoff run — however ill-fated the team’s games against the Houston Astros turned out — Gershovich knows that Seattleites and Washingtonians will show up when they care about something.

“If you buy a ticket to a game, just know you're part of something bigger,” she said. “The action of you being there is for equality, for women’s rights, everything. It’s so much bigger than what’s happening on the field.”

Correction: This article has been updated to include OL Reign assistant coach Sam Laity as one of five people who have been with the team since its inception, and correct the year Gershovich began photographing the Seattle Sounders Women from 2010 to 2012. Gershovich would also likely travel with the team to Washington D.C. if they advance in the NWSL playoffs. 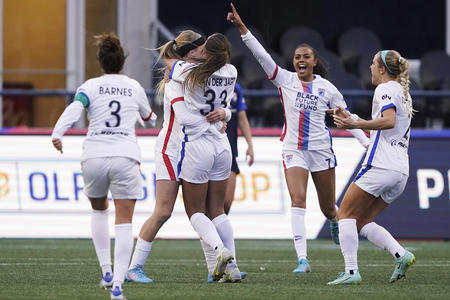 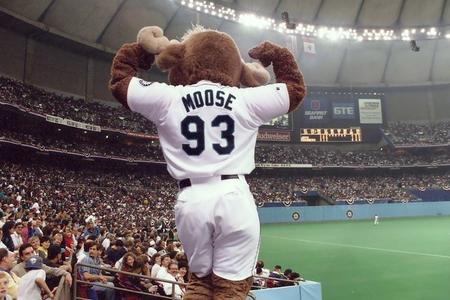 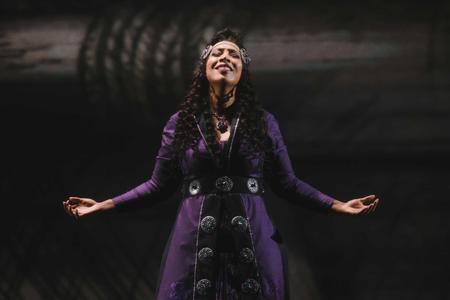 For ‘Tristan and Isolde,’ Seattle Opera brings back a star soprano

For ‘Tristan and Isolde,’ Seattle Opera brings back a star soprano