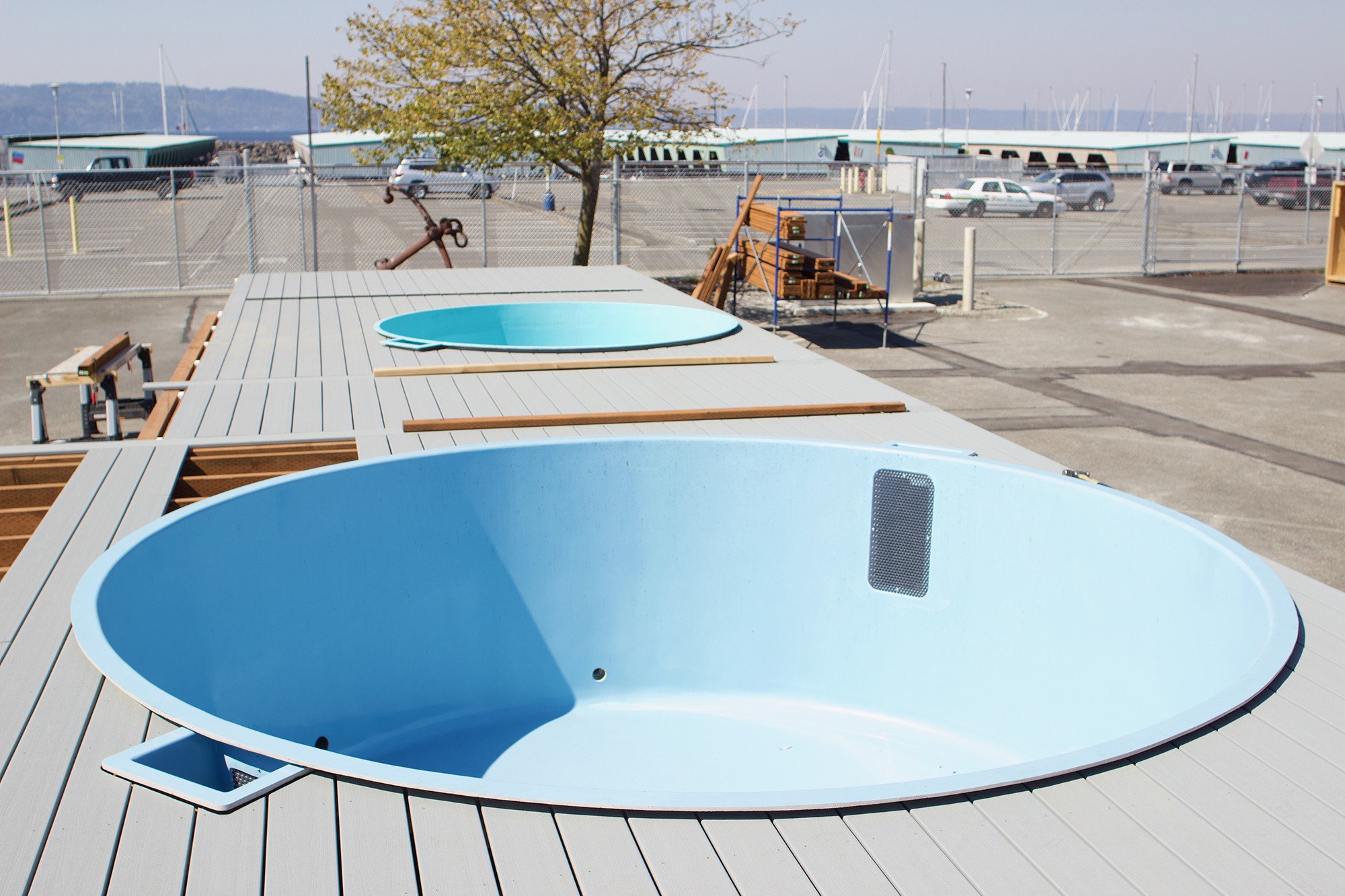 Two large fiberglass pools at the soon-to-open SR3 marine animal rehab hospital give convalescing animals a place to recover before they return to the ocean. (Hannah Weinberger)

Casey Mclean looks out over a 14,000-square foot construction site in the shadows of residential buildings and boatyards of Des Moines, 30 minutes south of Seattle. Right now, it looks like the world’s smallest state fair in mid-setup, with a large tent and modular building free of decoration, but the bones of what will be the state’s first large speciality marine wildlife hospital are all there, oriented around the facility’s hallmarks: two deep rehabilitation pools designed to hold 2,000-pound animals.

“I don’t think this has really sunk in yet,” Mclean says, betraying a smile from behind her seal-print face mask.

Mclean is a veterinary nurse and executive director of Sea Life Response Rehab and Research (SR3), and the facility represents the culmination of nine years of work for her team. When the hospital opens in a month or two, Mclean believes it could serve about 100 animals a year, a place where they can receive medical treatment, recuperate and learn to eat on their own before going back to sea.

Puget Sound’s booming human population creates immense challenges for marine animals. Pollution, boat traffic, warming waters, wildlife-fishery conflicts and more have all increased over the past few decades. Data from the National Oceanic and Atmospheric Administration show an average of 578 animals strand — that is, wind up on shore dead or in need of care — on Washington coastlines every year. And those are just the ones we find: Over 90 percent of animals in distress wash up unreported, in places where humans aren’t, or drop to the bottom of the ocean before anyone knows they need help.

Some humans strive to give marine animals a chance in a world that’s developing too fast for them. NOAA coordinates national and regional Marine Mammal Stranding Networks, whose mostly volunteer members respond to save animals if possible and gather information about how the state of the ocean trickles down to impact human health. Hundreds of those reports travel through the West Coast Network, which includes Washington, Oregon, and California; and some involved animals receive care in the field from capable groups like SR3.

But even when field medics are able to respond, follow-up treatments, intensive surgery and rehab can be nearly impossible to perform.

“Medical treatment usually is not just a one-time thing,” says Mclean. “If we have anything other than a harbor seal pup that needs care — if there's not anywhere for that animal to go, if it's in bad enough condition — we always consider humane euthanasia.” 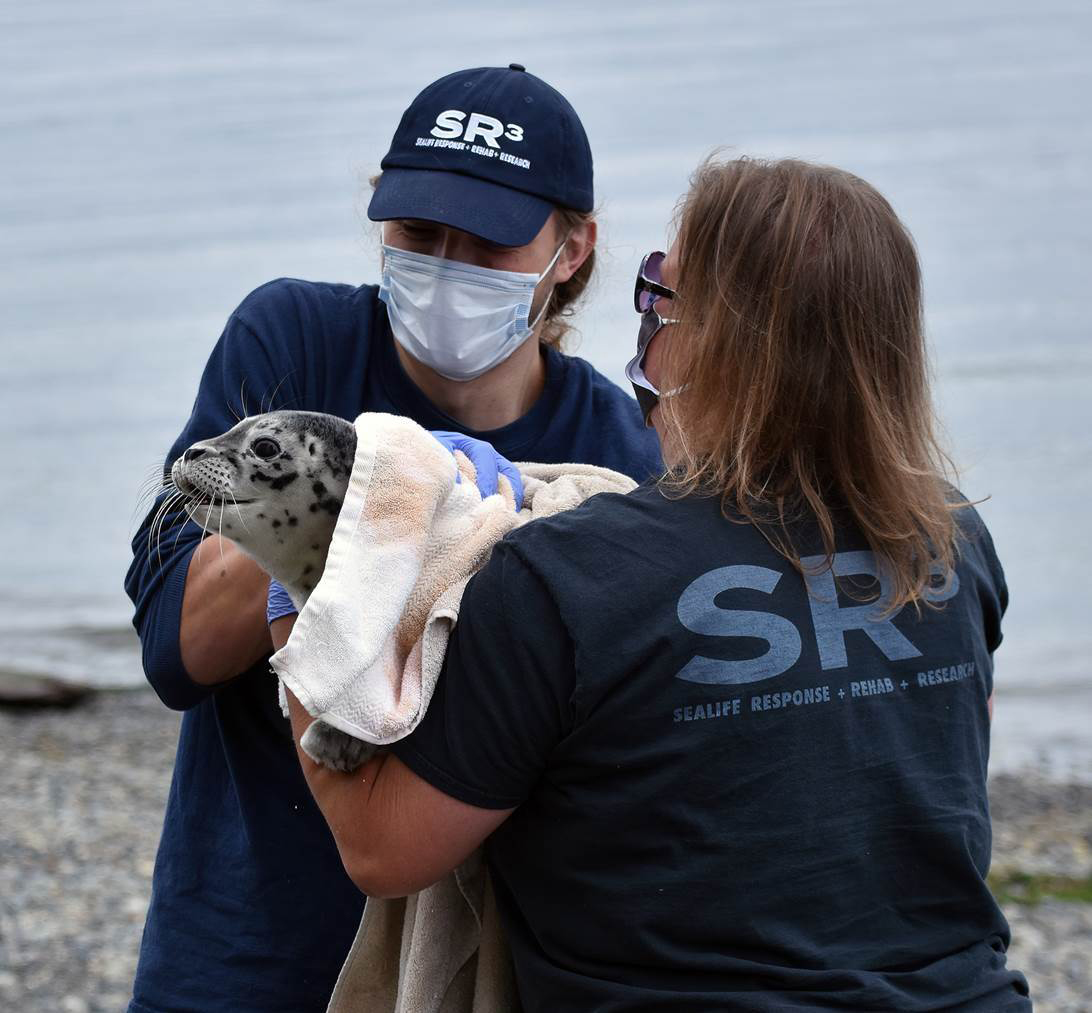 SR3 responders tend to a harbor seal pup, emaciated and likely abandoned by its mother due to human interference, in West Seattle in July, 2020. If animals are well enough to receive care and need it, they are either treated in the field; taken to Sausalito or now, taken to the SR3 hospital. (SR3 Sealife Response, Rehab and Research, with NOAA Permit #18786-04)

SR3 responders tend to a harbor seal pup, emaciated and likely abandoned by its mother due to human interference, in West Seattle in July, 2020. If animals are well enough to receive care and need it, they are either treated in the field; taken to Sausalito or now, taken to the SR3 hospital. (SR3 Sealife Response, Rehab and Research, with NOAA Permit #18786-04)

In the past, the only remaining option for struggling mammals is for SR3 to take them across multiple state lines. The closest existing hospital is the Marine Mammal Center in Sausalito, California, and responders take only a small percentage of animals on that difficult 15-hour drive because they are permitted to do so only for threatened or endangered species.

The drive to Sausalito is possible because SR3 field medicine has a decked-out ambulance, purchased from a local fire department. But a dedicated hospital will help SR3’s five staff members and dozens of volunteers provide animals with better longer-term care and rehabilitation — potentially saving marine mammal lives throughout the region.

The twin, light-blue tubs that serve as the hospital’s centerpiece are made of thick fiberglass and encased in a tall wood-and-steel platform, providing animals that can’t swim on their own a place they can rest. The tubs are designed to hold a wide range of creatures, from the smallest harbor seal up to a sea lion or small dolphin.

SR3 fills the pools with saltwater that flows through a series of on-site filtration units that allow staff to dial in salinity and sterility; they then circulate it through what amounts to a miniature sewage plant.

“This is a large amount of water. You can't just dump it every time they poop — so you need to be able to filter out all the bad stuff,” Mclean says.

On the east end of the compound sits an expansive party tent filled with a grid of a dozen small tubs, each ready to help baby seals swim safely for a few hours at a time before they graduate to the larger pools.

A modular building on the north end resembles a traditional vet office. Inside, responders have access to a surgery and treatment room, multiple offices, a conference room with a boardroom table, bathrooms and a prep kitchen ready to house restaurant-grade herring. 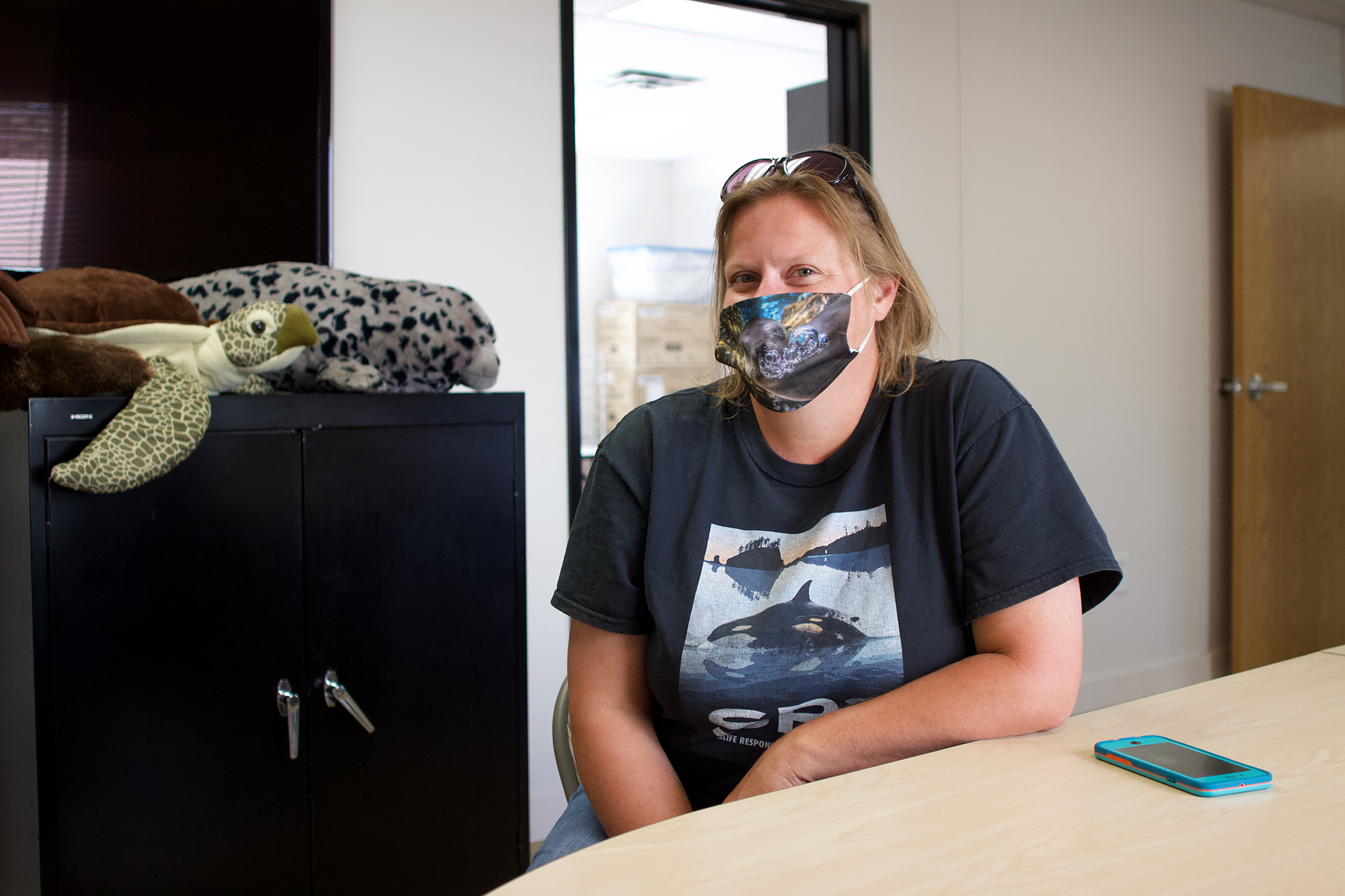 Casey Mclean, executive director of SR3 and a veterinary nurse, sits at the boardroom table in the main room of the organization's new modular hospital building. Beside her is a row of stuffed animals that volunteers use when practicing how to hold real animals. (Hannah Weinberger)

Casey Mclean, executive director of SR3 and a veterinary nurse, sits at the boardroom table in the main room of the organization's new modular hospital building. Beside her is a row of stuffed animals that volunteers use when practicing how to hold real animals. (Hannah Weinberger)

The building’s clinical feel is punctuated with unexpected whimsy: Volunteers learn to handle injured animals by first practicing on large stuffed marine animals that decorate a buffet table and cabinet. A small kitchen area provides creature comforts for humans on long shifts: “If we should have an animal like a sea otter or something that is under, you know, critical care [...] usually it'll be myself or another technician that would be here overnight to check on that animal," Mclean says.

“You kind of never know what you're going to need sometimes — sometimes we have to get really creative,” Mclean says.

Everything will eventually be enclosed behind a fence tall enough to keep animals from seeing out and people from seeing in.

“We keep them protected from becoming habituated to people because you don't want them to approach people in the wild,” Mclean says.

Angels for the animals

Extant facilities and vets in Washington — like Wolf Hollow Wildlife, PAWS Wildlife Center, World Vets and Marine-Med — have provided for decades what stranding network members say is valuable medical and rehabilitation care to some marine life (mostly harbor seals). But no stranding response group in the region is itself yet equipped for narrowly focused marine animal surgery and rehabilitation work to the extent SR3 is targeting, with a full-time marine mammal veterinarian (Dr. Greg Frankfurter) on staff.

“This is the first real large [Washington] hospital that's all inclusive for being able to not just respond, but also take long-term care of the animals, and be able to house them through an entire process of rehabilitation,” says Dr. Cara Field, medical director of the Marine Mammal Center.

Wolf Hollow Executive Director Chanda Stone agrees there is a need for a specialized hospital like this. Wolf Hollow has the capacity to rehab harbor seal pups, but is limited in what it can provide to other species. "A facility of this type would also be invaluable in the case of a large-scale emergency such as an oil spill, which could affect large numbers of marine mammals," Stone says. 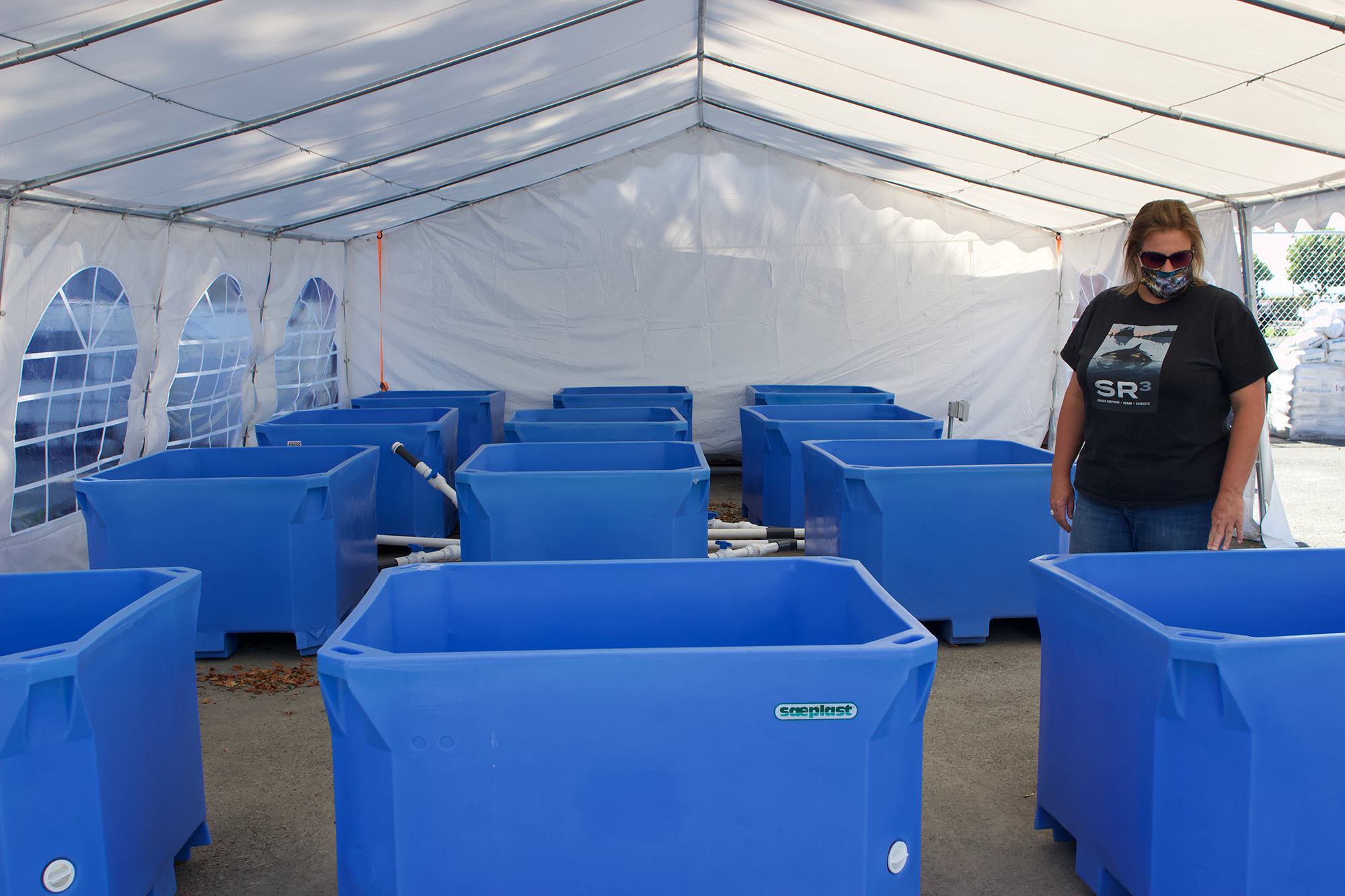 Casey Mclean walks through the baby seal rehabilitation area. Seals will swim and eat for short periods in the twelve small tubs, and could graduate to larger pools as their health improves. (Hannah Weinberger)

Casey Mclean walks through the baby seal rehabilitation area. Seals will swim and eat for short periods in the twelve small tubs, and could graduate to larger pools as their health improves. (Hannah Weinberger)

Lindsey adds that SR3’s location in South-Central Puget Sound will also be a “tremendous help geographically” for the network, as it shortens travel times to treatment centers and reduces stress on injured animals. It’s also helpful to responders during a pandemic: “SR3’s close proximity to West Seattle will provide the ability to make medical assessments and intervention more timely, potentially reducing both animal and volunteer time on the beach,” she says.

In 2016, SR3 received funds from an angel donor to start a field care program, do large whale entanglement response and Southern Resident Killer Whale research, and start looking for a home for a hospital that would focus on about 11 key animal species (California sea lions, elephant seals, green sea turtles, Guadalupe fur seals, adult harbor seals, northern fur seals, northern sea otters, Olive Ridley sea turtles, porpoises, dolphins and Steller sea lions). After searching from Bellingham to Olympia, they secured a spot last year in the Des Moines Marina, where it was able to receive permitting for the facility and have its demanding plumbing needs met. Des Moines is also relatively accessible to volunteer population hubs, as well as universities that might have students interested in helping with care or research.

Field says that for a facility like Marine Mammal Center, 90% of funding comes from private donors. “It's often very hard to get up and running because the upfront costs are very high in securing … and being able to build that facility,” Field says.

SR3 currently has a $1.2 million budget, which it will use to stock materials and treat large animals on varying timelines.

If all goes well, the hospital will be just the beginning for this venture. Mclean is planning in the near term to offer community days that help locals understand how their lifestyles affect animals just offshore, and to create more opportunities down the road for community engagement and on-site medical testing.

“One of the reasons we chose Des Moines is because the city really has a long-term vision with us. We do have a bigger vision to have a full education center and a big research area for labs and stuff like that,” Mclean says. “So they understand that and they're excited to see us grow and move on to a bigger spot.”

Update: This article was updated at 3:51 p.m. on September 15, 2020, with an additional quote from Wolf Hollow Wildlife's Chanda Stone.