A first for Washington, locals advise lawmakers on climate change

Everyday people gathered for the first Washington Climate Assembly to learn about and decide which solutions to prioritize. Now, it’s lawmakers’ move. 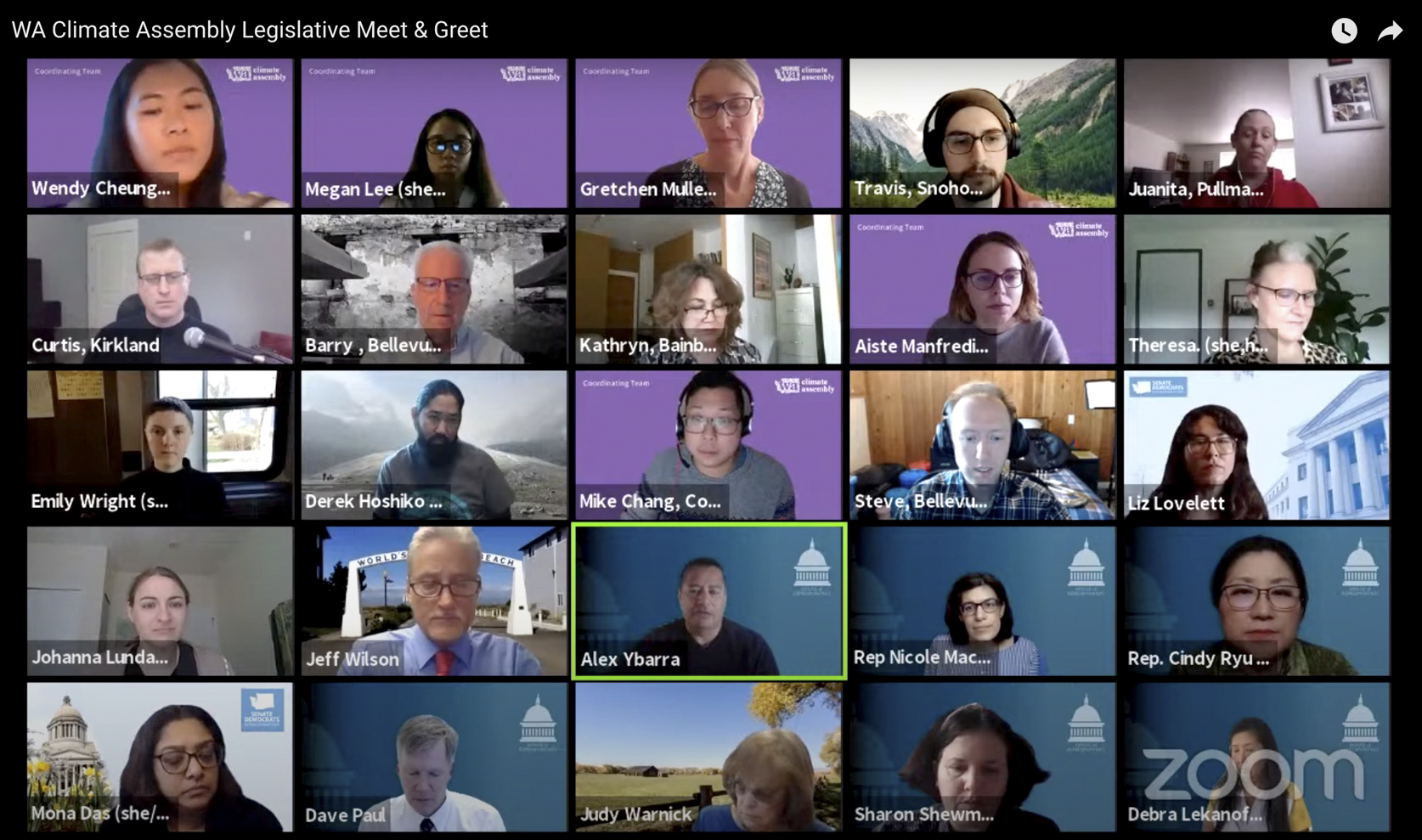 Imagine a group of Washingtonians representing every perspective in the state, all on a Zoom call at the same time to decide how to end carbon pollution. Even the people who don't think climate change is happening, or don't think it's human-caused, are allowed to type their ideas into the chat. What happens? Shouting, name-calling, finger pointing?

That's the experiment the Washington Climate Assembly has been running for the past couple months — albeit on a micro scale, with 77 people representing the interests of 7.6 million. After some disagreement, a lot of conversation, and a marked absence of shouting, the assembly decided on 148 recommendations that they presented to the Washington State Legislature late last month. But deciding on the recommendations — which fit into categories like transportation, buildings and energy — was only the last step in a five-month-long process that was the first of its kind in the United States.

How the assembly worked

Rod Caraballo approached these Zoom sessions like a sponge, trying to absorb as much information as he could. Caraballo, an IT network engineer who’s lived in Lynnwood for 20 years, was one of nine assembly members called up from Washington’s 2nd Congressional District.

Like the other members, Caraballo was selected via random-digit dialing during the selection process in November 2020. Members were chosen so that the assembly would be roughly representative of the state in terms of demographics, income, political affiliation and opinions on climate change. Every congressional district in Washington had representatives in the assembly, and political preference among them split 45 for the Democratic Party, 23 for Republicans and 9 for others. Of all members, 47 initially said they were worried about climate change, while 30 were not.

In the past, Caraballo had informal discussions about environmental policy with his friends, but the climate assembly was a unique experience: Many of the ideas in the learning sessions were new to him. He hadn’t previously known much about the Native tribes of the Pacific Northwest and said that presentations from Preston Hardison with the Tulalip Tribes and Leonard Forsman, chair of the Suquamish Tribe, broadened his understanding.

“What was eye-opening to me was that many initiatives on restoration and preservation were first initiated by tribal people,” Caraballo said. “I was wowed by the fact that they had these initiatives in the works because I thought they were recent or new — like keeping the rivers safe for salmon.”

For Angella Shepard, a Vancouver, Washington resident, the presentation on climate grief, given by University of Washington professor Dr. Jennifer Atkinson, struck a chord. Before the pandemic, Shepard worked regularly in a local high school to help at-risk kids graduate. She’d seen kids come in with stress about natural disasters, politics and the future, but hadn’t thought to connect those to climate change.

“I could see it with the high school students, looking back,” Shepard says, “I just didn’t have terms for it.”

Assembly members could ask any questions they wanted of the presenters, and the chats were often lively, with people sharing their opinions and experiences. People who live close to Puget Sound mentioned that they’d noticed the water table rise over the years. Others spoke about wildfires encroaching nearer to their homes.

In February, the deliberations began. The larger group was broken up into sets of 12 to 15 people, who talked through their ideas on topics from fossil fuels to forest management to plastics.

“We started out really broad, and then brainstormed what would be our dreams, our aspirations for the future, and then how we would get there,” said Shepard.

Presenters and members of the public had submitted more than 120 recommendations for the assembly to mull over, and by the end of the first few deliberative sessions, assembly members had come up with more than 280 ideas that were winnowed down and voted on. 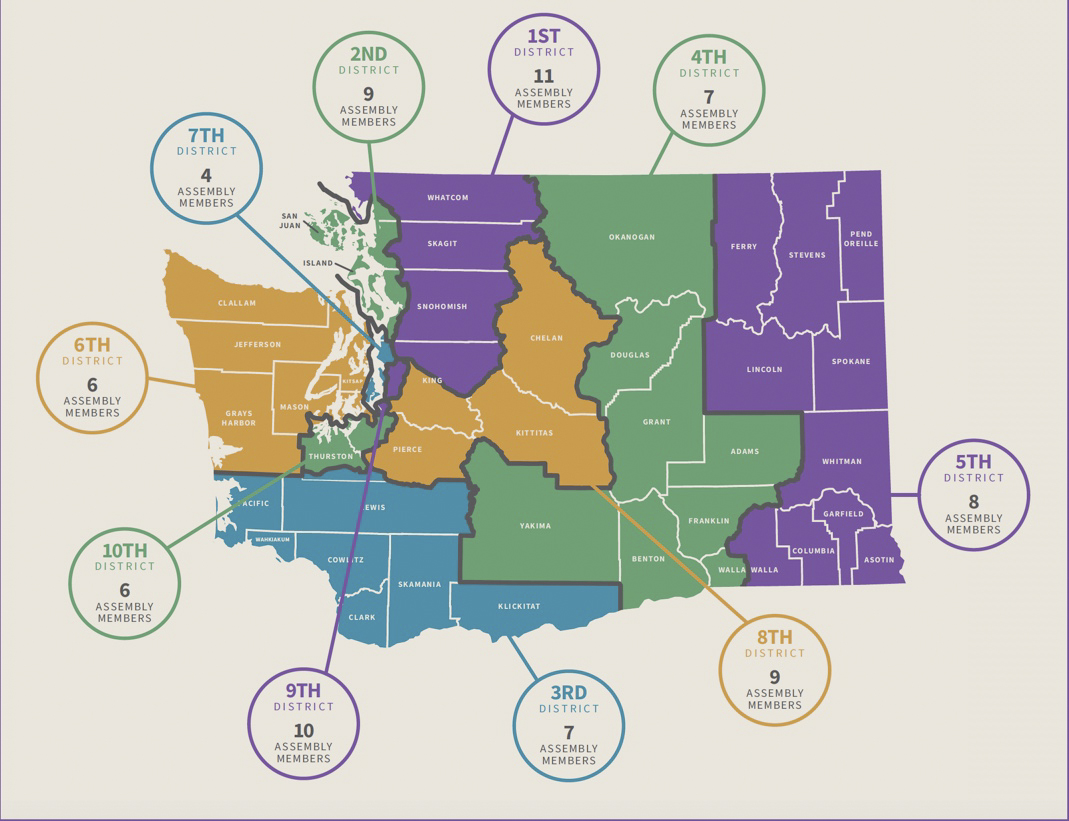 A map of the Washington districts the members of the assembly represent. (WA Climate Assembly)

A map of the Washington districts the members of the assembly represent. (WA Climate Assembly)

The assembly’s final report, which includes a full list of their recommendations, can be found here. The recommendations fell into eight categories: transportation, buildings, energy, natural solutions, circular economies, social policies, education and communication, and governance.

To pass through the assembly, a proposal had to be approved by more than 80% of members. Each member also weighted the recommendations by how strongly they felt about them, and an idea wouldn’t pass if a majority of people had doubts or reservations.

Transportation and buildings are the largest carbon emitters in the state, and the assembly agreed that they wanted to see the state push for green transportation infrastructure. That meant more electric vehicle charging stations, and also investment in low-cost and low-emissions public transit, encouraging less commuter traffic by incentivizing employers to let people continue working at home and putting in mixed-use zoning so that people could work in closer proximity to where they live.

Some suggestions were about what not to do: The assembly didn’t want to see rural people or tribes penalized for driving more for services, since those people don’t often have the choice to take public transit.

Rep. Jake Fey, head of the House Transportation Committee, said at the outset of the assembly that he was curious what their recommendations would show about the compromises regular people are willing to make on transportation in the name of the climate. Fey authored this year’s transportation budget, which includes grants to set up more electric vehicle charging stations across the state as well as funding to help transit agencies switch their fleets to zero-emissions vehicles. (Fey couldn’t be reached for comment by press time.)

Support for some climate measures remains a longstanding priority for most Washington voters. Consecutive years of Crosscut/Elway polls on legislative priorities have found that voters have consistently supported clean fuels measures by a greater than 2:1 margin. For the past four years that the polls have been conducted, Washingtonians consistently said they were in favor of some kind of carbon regulation. But carbon taxes, including Initiatives 732 and 1631, have failed at the ballot.

This year, the biggest attempt at climate legislation is a cap-and-trade bill known as the Washington Climate Commitment Act, which shares only some priorities with the assembly, who were supportive of a carbon “cap” but not “trade.” Washington environmental justice groups like Got Green have argued that allowing polluters to trade carbon credits allows them to continue polluting so long as they have enough money to do so.

Other pieces of legislation more closely related to the assembly’s ideas look likely to pass this year. An entire section of the assembly’s recommendations, circular economies, focused on investing in recycling and eliminating single-use plastics and materials like Styrofoam packaging. Senate Bill 5022 would phase out Styrofoam and require that most beverage containers be made of at least 50% recycled material by 2031. House Bill 1216 would allow the Department of Natural Resources to establish an Urban and Community Forestry program to help cities plan for more trees and vegetation. Installing more urban greenery, especially in low income areas, was a popular idea for the assembly.

Citizens’ assemblies are gaining popularity, and a 2020 Pew Research Center poll showed that 79% of Americans were in favor of the federal government convening assemblies for ordinary people to discuss and recommend laws.

Whether that enthusiasm translates into broader policy change is another question. Climate-specific assemblies took off in France in 2019 in part as a response to the “yellow vest” movement, and have also been held in the UK and Scotland. But French President Macron and Parliament have received criticism from some French assembly members for not including many of the recommendations in a revision to the French constitution currently under consideration.

Here in Washington, 18 lawmakers and 14 legislative aides attended the assembly’s final presentation. At that meeting, Sen. Liz Lovelett, a Democrat from Anacortes who sponsored a carbon tax that didn’t advance through the Legislature this year, said she’d be interested in meeting with assembly members during the interim.

Several lawmakers said they wished the assembly had happened when the Legislature wasn’t in session so that they could have participated more fully. Both Rep. Tom Dent and Sen. Judy Warnick, Republicans from Moses Lake, said they would love to get more involved in a future assembly.

“What it did was bring the two parties together in a conversation that was a little less politically charged,” said Warnick. “It brought us together without the need to argue over whether to pass this bill or that bill.”

Getting educated and moving forward

Assembly members themselves said they hope that the Legislature will take up their recommendations, but that they won’t be dissuaded if it doesn’t happen immediately. Many are enthusiastic about the possibility of future assemblies as a way to continue educating regular people and checking in about the direction state residents want climate policy to go.

“We’d like to see what our proposals will be like down the road a year from now,” said Caraballo. “Maybe we can have another assembly to review what was discussed, what didn’t make it, and why it failed. It’s not going to take just one shot.”

During the last week of deliberative sessions, Caraballo sounded more self-assured when talking policy. He rattled off possibilities he’d learned about, from carbon labeling on products to green roofs to the policymaking potential at the local, state and federal level.

“To have gone through this process and learned a lot and become more educated on what’s out there and what’s needed — that was the most rewarding for me, but I feel like that was the case for everyone,” he said.

One of the most agreed-upon recommendations was that Washington host a regular series of climate assemblies. Shepard noted that one of the most common phrases assembly members used to describe their experience was “inspired.”

“It’s more interesting to me now to read about what Biden is doing and what bills he’s signing,” she said. “Knowing more about what our state can do and its limitations, I can have more discussions about it at the grassroots level.”

As the meet-and-greet with legislators was wrapping up, Curtis, an assembly member from Kirkland, raised his virtual hand.

“The value of this is that it gives a temperature reading from across the state,” he said. “All of these policies are generally welcomed by all the political spectrum that has participated. I think that’s a good signal to the Legislature about the type of policies to pursue.”