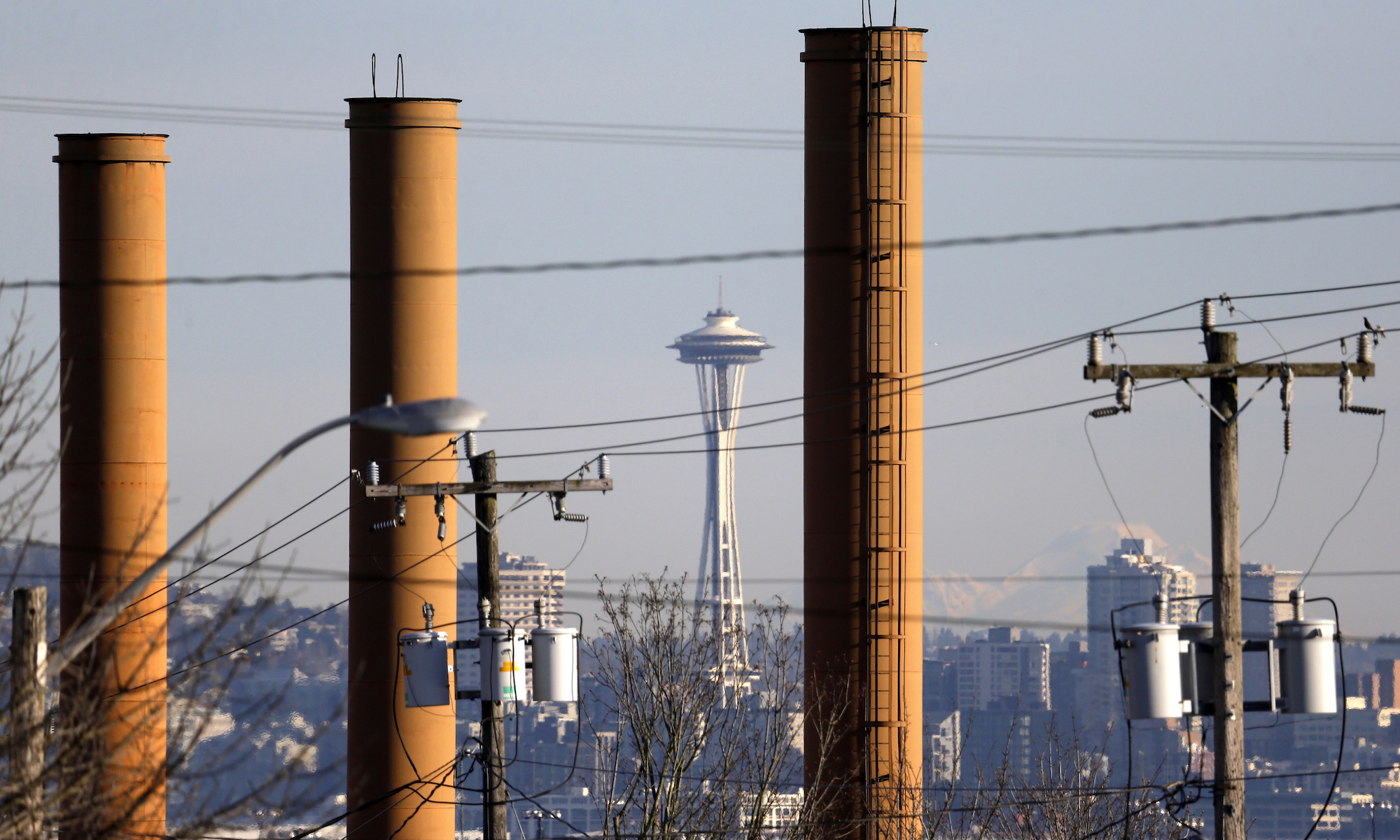 In this Feb. 25, 2016, file photo, the Space Needle is seen in view of stacks (still standing though now defunct) at the Nucor Steel plant in Seattle. Washington state voters will once again decide whether to charge large industrial emitters a carbon pollution fee to address climate change, two years after rejecting a proposal for the nation's first carbon tax. (AP Photo/Elaine Thompson, File)

Washington state rang in the New Year with the launch of its most ambitious plan to slash carbon pollution. The new “cap-and-invest” program is designed to follow in the footsteps of California, where a cap-and-trade system began in 2013, while trying to learn from its missteps.

Signed into law by Governor Jay Inslee in 2021, the Climate Commitment Act works by setting a statewide “cap” on greenhouse-gas emissions that steadily lowers over time. Washington, like California, is establishing a market for businesses to buy pollution “allowances” that will become increasingly expensive — an incentive to cut emissions and a way to raise money to counter climate change.

The first auction to sell off these allowances is scheduled for the end of February, and if all goes according to plan, Washington’s emissions will drop to 95% below 1990 levels by 2050 — an even steeper cut than California’s, which aims for an 80% reduction by the same year.

“We see the Climate Commitment Act as the new gold standard for climate policy across the nation,” said Kelly Hall, the Washington director for the regional nonprofit Climate Solutions, which helped shape the legislation. “The policy not only ensures that we reduce greenhouse-gas emissions in line with what science requires, but that equity and environmental justice are also foundational to the law.”

It’s the most recent example of a blue state putting a price tag on carbon dioxide, a longtime goal of climate advocates that has come with controversy. Last year, Oregon instituted a cap-and-trade system via executive order from former Governor Kate Brown after years of failed bills — including two attempts thwarted by Republican state senators going into hiding to avoid a vote. In the Northeast and Mid-Atlantic, a collection of almost a dozen states participate in a regional cap-and-trade program that began in 2009.

The federal government, however, has taken a different approach after two decades of abandoned attempts to make polluters pay for their emissions. Last summer, a Democratic-controlled Congress broke through the deadlock to pass the historic Inflation Reduction Act, which aims to lower emissions through green tax credits intended to speed the adoption of clean energy and low-carbon technologies.

Proponents of Washington’s approach say that other states could learn from its equity-focused approach to climate policy, the outcome of years of consultation with green organizations, businesses, labor groups, Native American tribes and environmental justice advocates. A standard cap-and-trade system can help cut global carbon emissions, but it doesn’t ensure that locals will see benefits.

Washington is the first state to pair cap-and-trade with a regulatory air-quality program to help people in the most polluted areas breathe cleaner air. It also relies on advice from an environmental justice council for implementing the policy and deciding how to spend the revenue.

Passing a price on carbon took the state more than a decade. After years of failed bills, starting in 2009 — and ballot measures that voters rejected twice, once in 2016 and again in 2018 — the legislature finally approved the Climate Commitment Act in the spring of 2021.

It could prove to be a turning point for Washington’s emissions, which in recent years have been heading in the wrong direction. According to the state’s most recent analysis, greenhouse-gas emissions in 2019 reached their highest level since 2007: 102 million metric tons, a 7% increase from 2018.

The program will work to cut emissions in tandem with a suite of policies that the state’s Democratic legislature has passed in recent years, including a commitment to 100% clean electricity by 2045 and a clean fuel standard that just went into effect. Last year, the legislature passed new rules requiring energy-efficient heat pumps in new buildings and set a goal to end the sale of new gas-powered cars by 2030.

In developing its new cap-and-invest system, Washington had the benefit of seeing how California’s played out over the past decade. The state struggled with debates over local air pollution and the unreliability of carbon offsets.

Where does the money go?

The revenue raised from Washington’s auctions — projected to be nearly $1 billion a year — will go toward implementing clean-energy projects, reducing emissions from buildings and transportation, and adapting to the effects of climate change. Washington is looking to emulate California’s successes by creating an energy-efficiency program for homes and offering vouchers for electrifying vans, trucks and buses to counter rising emissions from those sources. Legislators also plan to use the money to add more electric-vehicle charging stations and expand renewable energy projects.

“The investments are what’s going to ensure that we accelerate those emissions reductions so that they’re actually happening sooner rather than later,” Hall said. “They’re also what’s going to ensure that overburdened communities are benefiting.” At least 35% of the revenue will be invested in vulnerable communities — similar to California’s updated rules — with an additional 10% set aside for projects that directly benefit Native American tribes.

You’d think that forcing companies to pay for carbon pollution would mean that people would breathe less dirty air overall, given that they often come from the same sources. But the reality is more complicated. After California’s cap-and-trade system launched in 2013, studies showed that pollution in Black and Latino communities actually increased in the ensuing years. Just implementing a cap-and-trade system wasn’t enough to clean up the air for local residents.

To avoid running into the same problem, Washington took the novel approach of pairing an air-quality program with its cap on carbon dioxide. It will monitor and regulate air pollution in the state, locating the communities that are overexposed to air pollution. Once the Department of Ecology nails down what counts as an “overburdened” community, it’ll work to expand an air-monitoring network, set air-quality goals, and start conducting regular analyses to make sure those targets are being met.

“It’ll start this chain of good things around air quality, which is really positive, but it’s up to [the Department of] Ecology to really get that program running as soon as they can,” said Altinay Karasapan, the regulatory policy manager for Washington at Climate Solutions.

One motivating factor behind the air-quality program was ensuring that smaller sources of pollution won’t be ignored, said David Mendoza, the director of public engagement and policy at the Nature Conservancy in Washington. The cap-and-invest program covers only “permitted” businesses that emit more than 25,000 metric tons of CO2 per year. But the air-quality program will give the state power to also take action on all levels and sources of pollution, including smaller businesses and “non-permitted” sources such as transportation or wood-burning stoves, Mendoza said.

Another issue plaguing California’s cap-and-trade program is the tricky math around carbon offsets. The idea is that a polluting company can cancel out its CO2 emissions by buying so-called “offsets” that will suck up the same amount of carbon, such as a tree-planting project. The problem is, some of the forests used as offsets in California’s system have gone up in flames, threatening to erase the state’s progress on climate change.

​​To get around some of these issues, Washington is implementing stricter rules for offsets. If a business relies on an offset for compliance, an allowance will also be removed from the pool when it pollutes. In other words, it’s not considered a replacement for reducing emissions. “The way that offsets are designed in our program, offsets have additional emissions reductions benefits above and beyond the cap,” Hall said. In the initial stage of the program, companies are allowed to use offsets for only a small portion of their required emissions reductions, 5%.

Over the years, California has also sometimes struggled with having too much wiggle room in its market, Hall said. If you have too big a bank of allowances, companies won’t be required to reduce their emissions further, so Washington’s system allows the state to reset the allowance cap to adjust to shifting conditions and to make sure it meets its emissions goals.

The cap-and-invest system covers 75% of statewide emissions, including utilities and fuel suppliers. Sources like agriculture and aviation had to be left out due to existing laws.

One criticism of Washington’s new system is that many large emitters — those designated as industries that are susceptible to fluctuations of global and regional markets, such as paper mills and petroleum refineries — will be able to buy allowances at little or no cost for the next dozen years. The exception was a response to concerns that big polluters might pick up their business and move to another state where they wouldn’t have to pay for their emissions.

“I think that is a concern,” Mendoza said, referring to some companies getting a free pass. “I don’t think it ruins the program though, right? It does decrease the amount of money coming into the program. All those entities are still covered by the declining amount of allowances, so they still have to reduce their emissions.”

This story was produced for Grist on Jan. 9, 2023 and is republished here with permission. 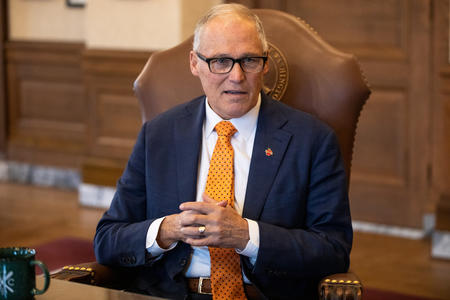 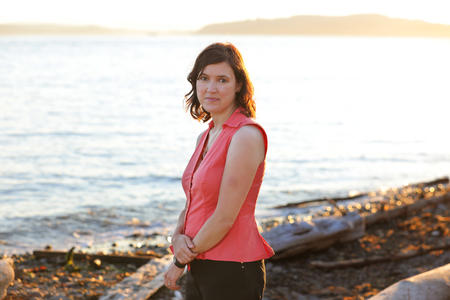 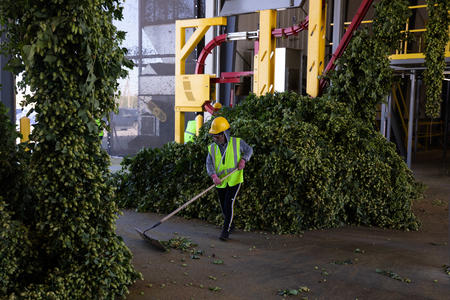 Kate Yoder is a staff writer at Grist.