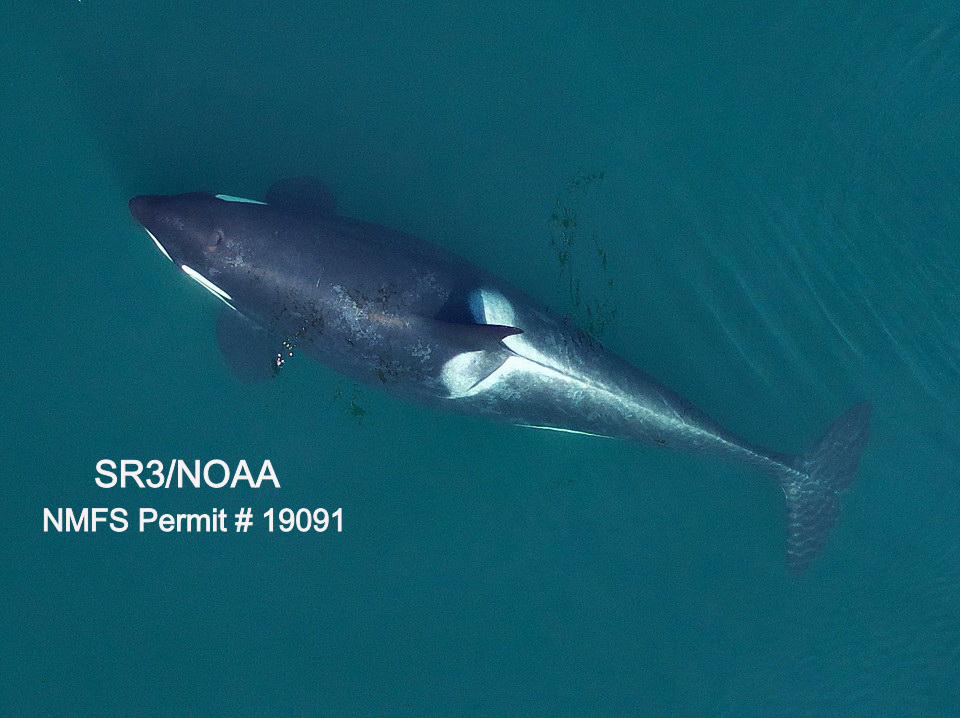 Aerial image of a heavily pregnant L77 in September 2018, several months before giving birth to L124. Pregnancy in killer whales typically lasts 17 to 18 months, and her increased width at midbody clearly indicates she is in the late stages of pregnancy. Image was collected by SR3 and NOAA’s Southwest Fisheries Science Center in September 2018 using an unmanned octocopter. (Holly Fearnbach/SR3; John Durban/NOAA)

I was so ready to celebrate something in 2020.

When orca experts announced two pregnancies in the southern resident killer whale population in Puget Sound, I was one of many who erupted in heart-eye emojis. The pregnancies are in the only orca population federally listed as endangered, and one of the expectant mothers is Tahlequah, who devastated anyone with a heart two years ago, when she grieved for her dead calf.

But I, a wet blanket, wondered: With so much facing these whales — lack of food, pollution and ocean disturbance — should I get my hopes up? Should I count my orcas before they’re born?

In interviews with orca experts for a story on what to expect when a pregnant orca is expecting in Puget Sound, I “whoa’d” and “dang’d” more than I ever have, and thoroughly bummed out my partner and friends while recounting what I’d learned. There are some terrifying, sobering facts and theories that together make you realize even apex predator babies (especially ones in endangered populations) have to push through a lot just to survive their first year. Cetaceans have high rates of calf loss even in populations that aren’t endangered, so I’m still holding my breath — and with orcas gestating for 18 months, I could asphyxiate in the process.

I won’t recount all of nature’s heartlessness to orca calves here, but I want to share two things about orca pregnancy and early life that struck me.

The first suggestion that really took my breath away about orca pregnancy was how public it might be in a pod. It might not be outwardly visible to humans that an orca is gestating until approximately the sixth month of pregnancy, but orcas have the benefit of echolocation. As Dr. Deborah Giles of the University of Washington’s Center for Conservation Biology told me, it’s not impossible to think an orca’s family might know she’s pregnant simply from “hearing” the baby. “It’s like living with moving and breathing ultrasound [machines] all around you called your mom and brother and sister,” she said. It’s hard to strike the balance between not personifying an orca while recognizing its intelligence, social networks and capacity to grieve, but you wonder what the impact of losing a calf  has on a tightly knit family where everyone might know immediately that tragedy has struck.

Another fact that’s lingered with me: the mother’s unintentional sacrifice of a firstborn.

Orcas reach sexual maturity at about 12 years, and if they’ve been living in polluted waters like Puget Sound, they’ve accumulated a lot of legacy pollutants in their blubber. To make 40% fat milk for calves, mothers’ bodies instinctively draw from their blubber stores — especially if they’re not getting enough to eat. That means that tiny calves are getting blasted with a toxic cocktail during their most formative stage of life. If they’re a mother’s first calf in a while, or ever, they can be subjected to more than a decade’s worth of built up pollution.

But if those calves don’t make it, and their mothers quickly become pregnant again, their death can be a sacrifice so the second calf has a better shot at life. Epitomizing the idea that nature Is metal, that first calf becomes a literal, if accidental, vessel for pollution: With fewer dangerous chemicals circulating in her system when she gives birth, the mother feeds her second calf less polluted milk. (In the current southern resident cases, both pregnant moms have given birth before, with Tahlequah likely getting pregnant soon after losing her calf in 2018.)

Ultimately, if these calves make it, they would be beating huge odds. And its appears plenty can be done to give them a better shot: You can respect new boating regulations when you’re out on the water, read up on proposals that claim to increase orcas’ access to fish (like the removal of the lower dams on the Snake River, stop flushing your medications down the drain and keep tabs on how the governor’s orca recovery plan is moving along.  And don’t count your orcas before they’re born

This story was first published in Crosscut's Weekly newsletter. Want to hear more from reporters like Hannah Weinberger? Sign up for the newsletter, below.