A handful of unassuming, ideologically split districts have become hotbeds of political power for both Washingtons. 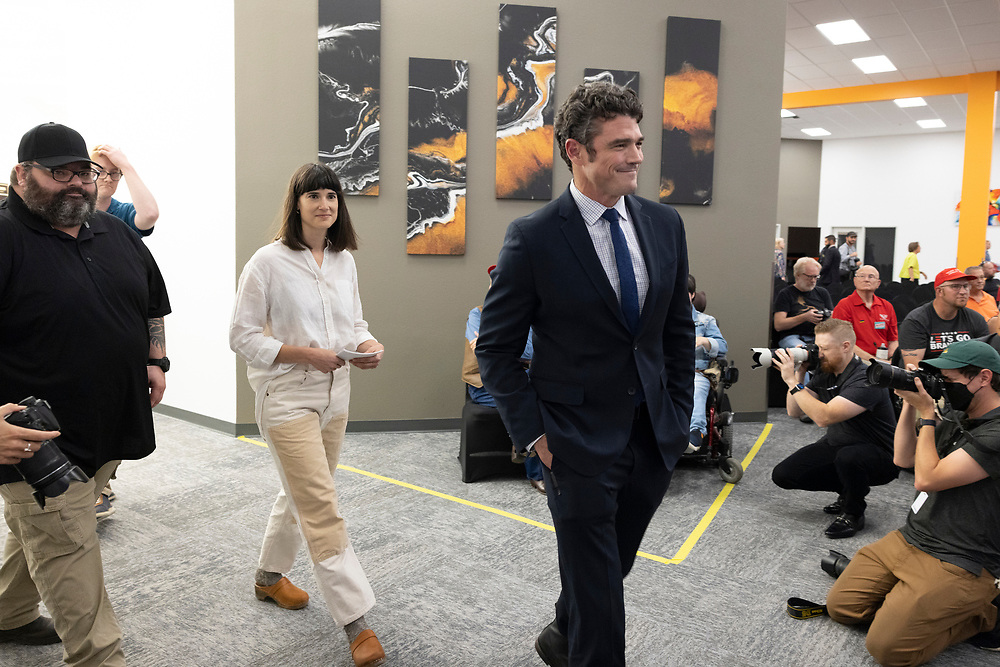 One drizzling afternoon earlier this month, I stood in the Issaquah home of King County Councilmember Sarah Perry, who was hosting a couple dozen doorbellers to help re-elect U.S. Rep. Kim Schrier.

It’s an unassuming point on the map: a hamlet tucked away near the Cascade Mountains, bombarded that day with patches of fog and echoes of gunfire from a nearby range. The neighborhood is also a quiet through-line of Washington’s political realignments this past decade. And what happens here will resonate in the coming years.

The neighborhood lies in King County’s 3rd district, which Perry won just last year after challenging long-time incumbent Kathy Lambert, who had identified as a Republican. Perry’s home also sits in the 5th Legislative District, formerly competitive territory that as recently as 2016 still elected a conservative Republican – Jay Rodne – to the state House. Meanwhile, state Sen. Mark Mullet, the district’s moderate Democrat, spent years beating back tough challenges from Republicans – and then spent 2020 fending off a challenge from his own party’s progressive wing. He won by 57 votes.

And of course there’s Washington’s 8th Congressional District, which now includes parts of Eastern King, Pierce and Snohomish counties as well as Chelan and Kittitas counties. In 2018, Schrier, a pediatrician from Sammamish who had worked in Issaquah, became the first Democrat ever to win election to the seat. This year she faces a challenge by Republican businessman Matt Larkin in a race that could determine whether Democrats hold the House of Representatives.

It has been nearly two decades of dramatic power shifts in Congress. Voters have repeatedly thrown one major party out of the majority – often in the midterms – only to turn around and do the same a couple years later to the other party.

In the 2006 midterms, Democrats took control of Congress from Republicans as President George W. Bush and his administration lost support. Republicans recaptured the House in 2010, driven in part by their deep animosity for President Barack Obama. In 2018, Democrats retook the House, giving their party a check against President Donald Trump. Republicans this year hold a good chance of taking back the House, as President Joe Biden’s administration faces the headwinds of a strange post-pandemic economy that’s produced both low unemployment and rising consumer prices.

It's easy to think of Washington as a progressive state – even the Republicans here hold a historical legacy of establishing vote-by-mail elections and welcoming immigrants and refugees. But no point on any given map is really red or blue. And the most dynamic races in America’s political system include the few dozen congressional races whose districts often straddle  fringes of overlapping ideologies.

Washington has another competitive congressional race this year in which the state’s ever-shifting politics are on display.

After electing U.S. Rep. Jaime Herrera Beutler, R-Battle Ground, to several terms, conservative voters in Southwest Washington’s 3rd Congressional District threw her out in the August top-two primary. Herrera Beutler was one of only 10 Republicans who voted to impeach Trump after the former president’s attempts to overturn the election and the insurrection at the U.S. Capitol on Jan. 6, 2021.

Vying to replace her is Joe Kent, a former Green Beret and CIA operative who has had numerous affiliations or interactions with far-right street gangs and white nationalists. He has vowed to sharply limit immigration, deploy the U.S. military to America’s southern border, impeach Biden and shut down the federal government for negotiating leverage. He faces Marie Gluesenkamp Perez, who owns a Portland auto shop with her husband and lives in rural Skamania County in the home they built themselves. A fellow skeptic of the past few decades of globalism, she has vowed to help restore some of the region’s timber industry and defend legal abortion as the decades-long conservative project to outlaw the practice rolls onward.

The U.S. Senate has also spent much of the past two decades flipping back and forth, with the majority parties often operating at the slimmest of margins in a chamber that needs at least 60 votes to get most things done, given the modern use of the filibuster. Democrats this year seek to keep the current 50-50 tie, which allows for the vote of Vice President Kamala Harris to secure a simple majority.

But it’s a closer-than-usual race for U.S. Sen. Patty Murray, a five-term stalwart of politics in Washington and a longtime member of Democratic leadership.

Murray has offered a full-throated defense of the party’s legislation to tackle climate change, lower prescription drug prices and healthcare costs, and to provide relief to businesses, people and local governments during the COVID-19 pandemic.

Her opponent, Republican Tiffany Smiley, has assailed those Democratic spending plans and recently cut an ad with voters who said they’d supported Murray in the past but were switching to the Republican. If Smiley prevails, she would become the first Republican elected to the Senate from Washington since 1994. It would be a veritable political earthquake. On the flipside, Smiley could outperform every previous Republican challenger to Murray – and the incumbent could still win the race by four percentage points.

The Nov. 8 ballot offers at least one other example of our shifting politics: the special election for secretary of state between Steve Hobbs and Julie Anderson.

Hobbs is a moderate Democrat appointed last year after Republican Kim Wyman took an election-security post in the Biden administration. Anderson, running as a nonpartisan candidate, is currently the Pierce County Auditor, which administers elections.

The secretary of state among other things has served as the state’s top elections official, a post Washingtonians have entrusted to Republicans since the 1960s. Over the years, those GOP officials helped build Washington’s vote-by-mail system. During the pandemic, Wyman helped other states adopt mail balloting as they struggled to vote before the arrival of vaccines. She went on to defend Washington’s system against Trump’s efforts to delegitimize mail balloting as he sagged in the polls before the 2020 election, and his attempts to overturn it afterward.

There is no Republican on the ballot this year, after GOP candidates diluted their vote share in the August top-two primary. But state Rep. Brad Klippert, R-Kennewick, is running a write-in campaign with the support of the Washington State Republican Party and the King County Republican Party, among others. Klippert, who has promoted unfounded stories of election fraud, wants to scrap Washington’s vote-by-mail system and replace it with polling places and paper ballots.

It could well be the voters of the unassuming points on the map, at the edge of Washington’s ideological fringes, who cast the deciding ballots that elect Hobbs, Anderson or Klippert to the office.