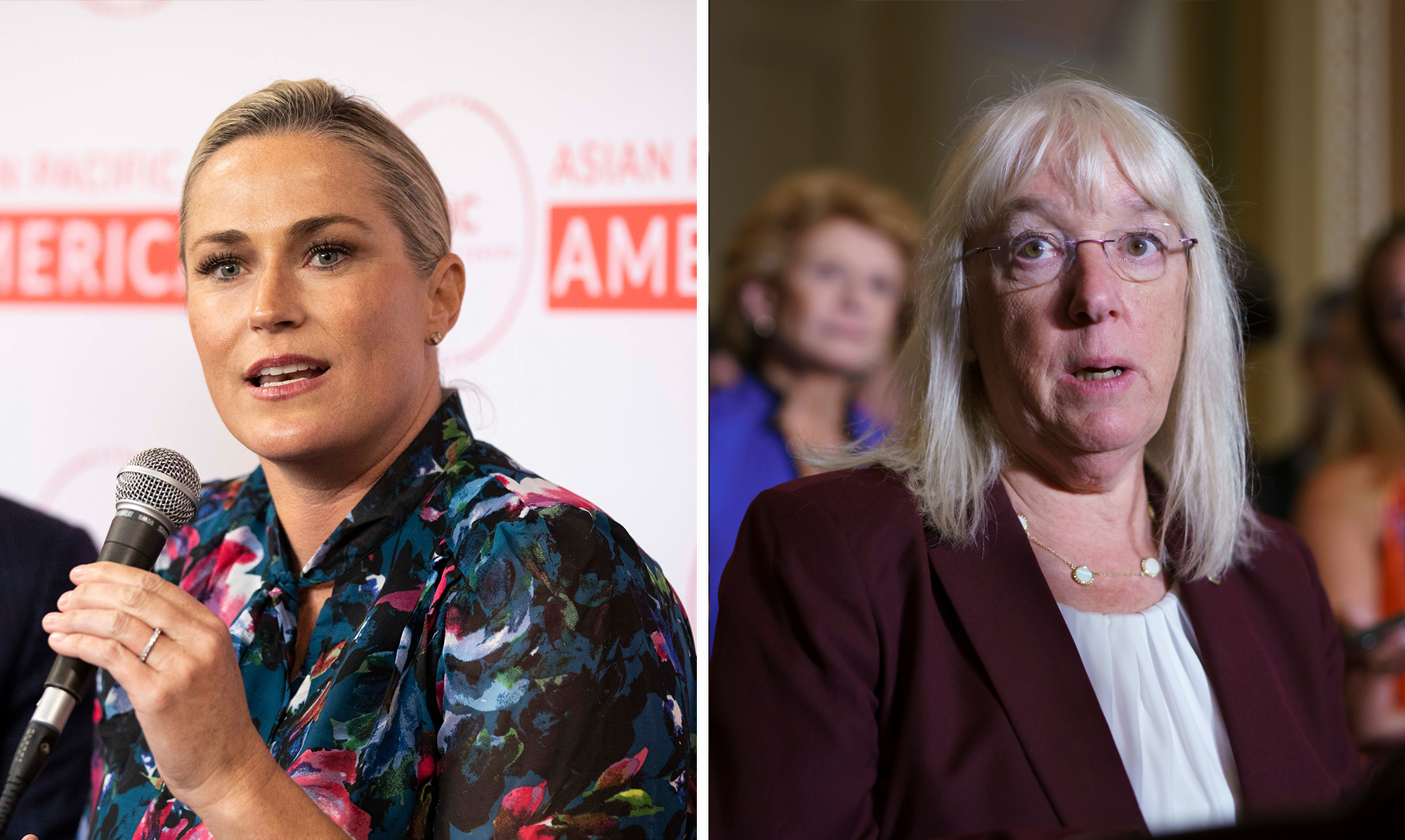 Patty Murray entered the U.S. Senate in 1993, has won re-election four times, has spent 15 years in national Democratic leadership and has chaired powerful committees on the budget and veterans affairs – currently the Senate Health, Education, Labor, and Pensions Committee.

In approaching the Nov. 8 general election that will determine if she gets a sixth term, Murray, 71, has emphasized the recent string of policy victories that she and fellow Democrats have eked out under President Joe Biden with the barest U.S. House majority and an evenly split Senate where Democratic Vice President Kamala Harris has cast a tie-breaking vote 26 times in the past two years.

There was the 2021 COVID aid package, known as the American Rescue Plan; the CHIPS Act, intended to boost American manufacturing of computer parts, the slowdown of which during the pandemic caused supply chain problems for automobiles; and, most recently, the Inflation Reduction Act. This last one contains the most ambitious measures ever taken by the U.S. government to fight climate change. Another part of that legislation capped prescription drug costs for seniors on Medicare and limited insulin copays for them to $35 monthly.

“I think we showed that Democrats in the toughest of circumstances, a 50-50 Senate, showed that we are willing to sit down and move our country through a better place,” Murray said in an interview from her apartment in Washington, D.C., the same week the Senate voted to approve a short-term budget and spending agreement.

Yet it is many of those same pieces of legislation that Murray’s opponent, Tiffany Smiley, brings up as the reason to unseat the longtime incumbent.

If she is successful in doing so, Smiley will have defeated perhaps the most prominent and powerful elected Washington Democrat and one of the most senior Democratic officials in the nation.

Smiley, a 41-year-old former nurse, left that young career abruptly at 23 to become a veterans’ advocate after her husband returned from the Iraq invasion injured and blinded.

As she’s traveled the state since declaring her candidacy last spring, Smiley has condemned the Democratic spending packages – which added federal dollars atop multiple COVID aid packages approved by Trump in 2020 – as a prime factor in a heated and discombobulated economy that has seen prices for gas, groceries and other goods rise dramatically.

“How long do we have to wait for prices to come down?” said Smiley, who has released a campaign ad on prices. “Is she trying to bankrupt us here?” On top of that, she’s pointed to Biden’s recent order wiping out some student debt, saying, “Any hope for doing something about inflation was totally wiped out [by] student loan forgiveness.”

Smiley has her work cut out for her. Washingtonians haven’t elected a Republican to the Senate since Slade Gorton won the state’s other senate seat in 1994.

The August primary was an 18-way contest in which the top two vote-getters advanced, but Murray and Smiley were considered the only serious candidates. Murray took 52% of the vote, with other Democratic candidates scooping up another couple percentage points. And Smiley received 34%, with a handful of other Republicans getting another 7% of the vote.

“Smiley would have to get all the undecideds and convert a few Murray voters to pull it off at this point,” said pollster Stuart Elway.

Still, many Republicans have found in Smiley a candidate they like. The newcomer to politics has raised a good deal of funding to spread her campaign message, despite still lagging behind Murray.

If she manages an upset of the incumbent, Smiley will succeed where five other Republicans failed.

A product of Bothell, Murray served in the state Legislature before winning her 1992 Senate race by beating then-Republican representative Rod Chandler after Democratic Sen. Brock Adams declined to run again amid a harassment scandal. Murray’s 2016 campaign arrived with the ascension of Trump. In that race Murray defeated Vance, a former Republican chair who disavowed Trump even before the election, and who this year is running for the state Legislature as an independent.

The race in Washington comes as Republicans seek to claw back the U.S. Senate and reverse the Biden agenda, a fierce contest that is playing out largely in a handful of other states, such as Pennsylvania and Georgia. Meanwhile, Democrats are trying to keep control of the chamber, and perhaps even gain a seat or two, which might make it easier to advance their priorities.

In an interview from the Tri-Cities as she campaigns across the state, Smiley criticized Biden’s order in late August that the federal government forgive some student loan debt, but wouldn’t commit to fully repealing it. But, she said, “I would like to make sure that does not go on the back of taxpayers of Washington state, for sure.”

Likewise, Smiley criticized the Inflation Reduction Act, which Democrats passed in August on a party-line vote, but did not commit to fully repealing it. “I certainly will stop the extra spending in its tracks and insure that we lower energy costs.”

Smiley, who grew up in rural Washington and lives in Pasco, is relatively new to electoral politics, though she did some outreach for Trump on the 2020 campaign trail. “I spoke for veterans, on behalf of veterans,” she said. “I did a few Zooms.”

But she has said – and did again in an interview – that Joe Biden is the legitimately elected president. This of course is contrary to what Trump and many other Republicans contend, though there is no evidence of widespread election fraud and dozens of court challenges across the nation arguing otherwise have been dismissed by the courts.

Abortion has also become a major campaign issue, following the U.S. Supreme Court’s ruling this summer stripping away federal protections on the procedure. Murray has cut a campaign ad on the issue, and in her interview vowed to codify Roe v. Wade’s protections through Congress.

Some Republicans have been pushing for more forceful restriction on abortion, with Smiley’s would-be Republican colleague Sen. Lindsay Graham recently introducing a bill that would make abortions illegal at 15 weeks. Smiley says she would not support such a plan, saying she believes it should be left up to individual states to decide. “I am personally pro-life,” she said. “But I oppose a federal abortion ban.”

Murray has made the federal rollback of abortion protections a major part of her campaign, along with the challenges to democratic norms represented by Trump’s attempt to overturn the 2020 election results and stay in power.

“It is so important in this time in our nation's history that Washington state has a voice in the policies and decisions that are made in our country,” she said, adding: “I am determined to go back there and be that voice for Washington state again.”

Murray was accused of misusing that voice last month after she claimed in a tweet that “Republicans plan to end Social Security and Medicare if they take back the Senate.” She was referring to a plan presented by Sen. Rick Scott (R-Fla.), chair of the National Republican Senatorial Committee. That plan was rejected by Republican leadership in the Senate, and fact-checkers deemed Murray’s statement an effort to “conjure up a nonexistent GOP plan regarding Social Security and Medicare.”

“I've heard Republicans and pundits say, ‘Oh, don't worry when it comes to Roe being overturned, and Donald Trump is not going to overturn an election,” she said, adding: “So I'm not into listening to them.”