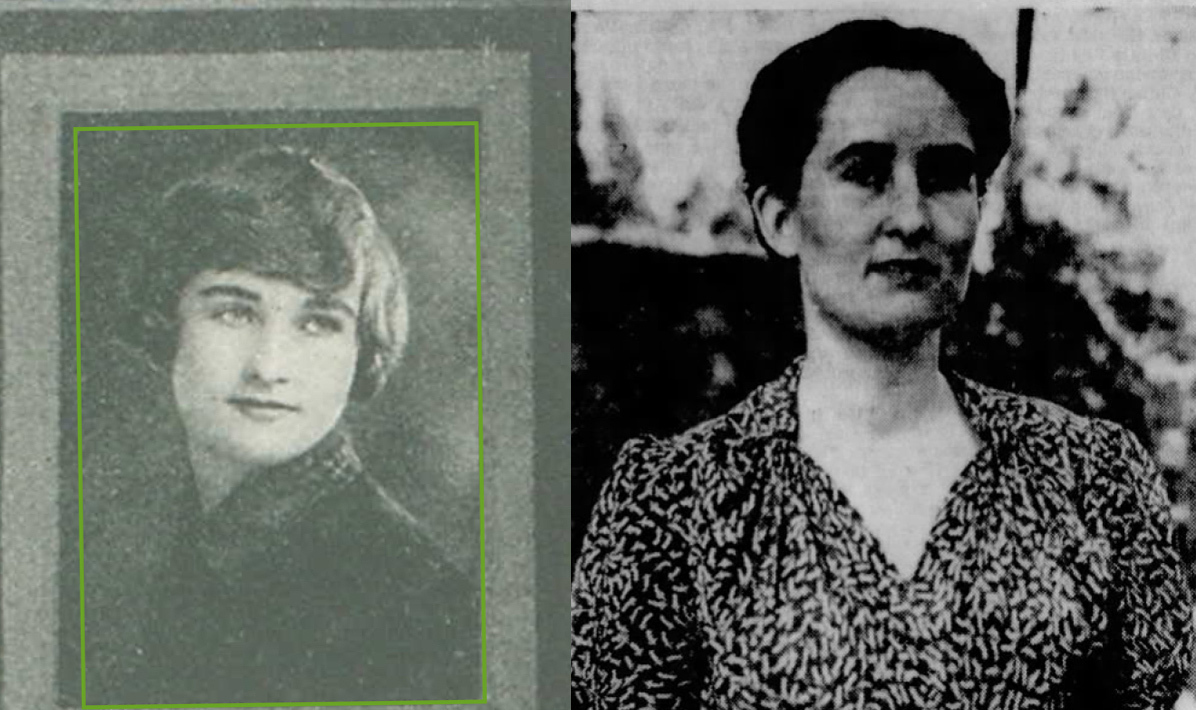 Spokane resident Margaret Weaver protested fascist groups like the silver shirts across the country during the 1930s. Left: Weaver’s high school yearbook photo from 1928. Right: A portrait of Weaver that ran in the Spokane Spokesman-Review after she was arrested for picketing a silver shirts meeting in 1938. (Courtesy of the Spokesman-Review)

The Spokane area and north Idaho have long been known as a gathering place for right-wing militias and neo-Nazi groups. The recent arrest of a cadre of Patriot Front members accused of conspiring to riot at a Pride event in Coeur d’Alene, Idaho, is a reminder of the draw the region has. It has long been tagged by white supremacists as the “American Redoubt,” a hoped-for ethnostate in the inland Northwest.

But the area also has produced anti-fascists to counter these efforts. Perhaps the first was a young woman from Spokane who played a major role in what one author has called “the first American uprising against Nazism.” A few years later, she helped lead the first anti-fascist protest in her own hometown.

Margaret L. Weaver was born in Spokane in 1910, daughter of a well-to-do rancher, orchardist and lumberman, Lawrence Weaver. Her high school yearbook in 1927 shows her active in student clubs, a class salutatorian who was headed for college. She took a degree in psychology from Stanford University and moved to New York after graduation in 1931, where she worked in schools and engaged in progressive causes.

She lived in Greenwich Village and emerged as a “powerhouse” activist who “had the courage to face down the ruffians of the International Longshoreman’s Union, which controlled the waterfront in a smash-mouth manner,” according to writer Peter Duffy, author of The Agitator, a nonfiction account of anti-Nazi activism that features the seminal protest in 1935 that Weaver helped plan and execute.

Weaver worked the waterfront recruiting for the Communist Party. There she met a group of young, leftist seamen whom she let stay in her apartment while she was on a trip to New England. Her time with these young men impacted the trajectory of her life of activism.

Outrage about what the Nazis were doing in Germany was growing, and a match was lit among seamen when the Germans illegally seized a young American merchant sailor from an American ship in Hamburg. The Germans accused him of trying to overthrow the Nazi government after the Gestapo discovered leaflets and “Death to fascism” stickers in his cabin. The young sailor was Lawrence Simpson of Kirkland, and his imprisonment, including time in a concentration camp, became a cause célèbre and stirred diplomatic action to get him released.

Simpson was taken in late June 1935. In July, the German ocean liner, the S.S. Bremen, came to New York flying a massive swastika flag. Maggie Weaver and her pals planned a protest where, disguised as partygoers, they would board the Bremen before the ship left port and tear its Nazi flag down.

And they did. When the farewell revelers were signaled to leave the ship, a small group pushed through the crowded deck and tore the giant banner down while fighting off the crew. “What a beautiful sight it was, to see the flag in the spotlight go down in the river,” Weaver remembered.

Meanwhile, the Germans went berserk, a protest crowd on the wharf roared its approval, and fights broke out. The protester tasked with tearing down the flag apparently hit a New York policeman with brass knuckles and was shot and wounded. “Reds Storm Liner in Riot Here,” screamed the front page of the New York Daily News. 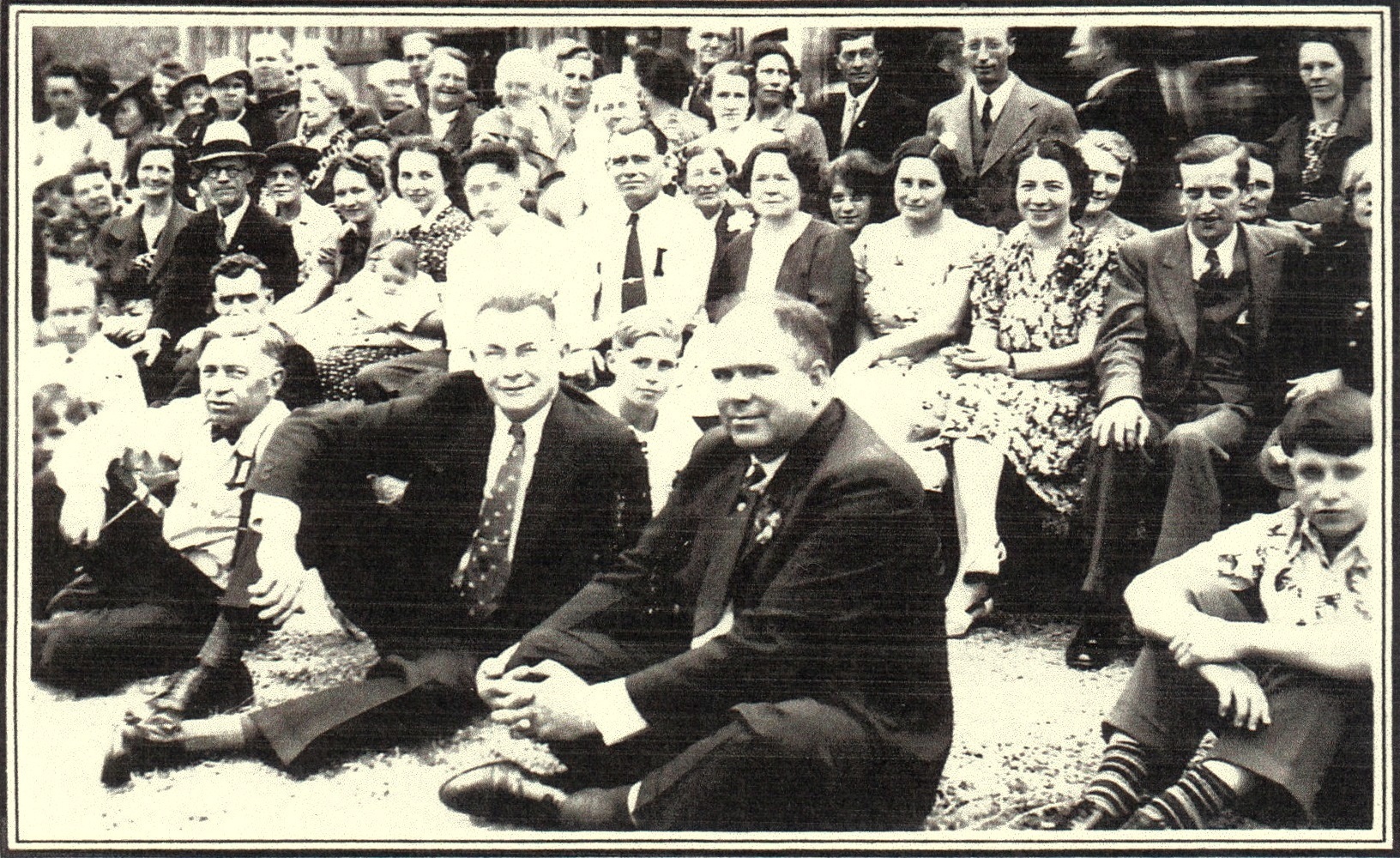 Weaver’s future husband, Arthur “Mac” Blair, an Irishman from Liverpool, England, a radical dockworker and one of the original plotters in her apartment, was one of six arrested. Weaver raised money from her sisters to help bail them out. A sympathetic New York magistrate freed five of the six, dismissing riot charges against them, claiming that it was the Bremen that provoked a riot by flaunting its Nazi flag. He likened it to a pirate flag. German officials were outraged.

Meanwhile, back in Weaver’s hometown of Spokane, concerns were expressed about domestic fascism. In 1934, the Spokane Chronicle ran a front page story: “Reign of Terror Plotted for Spokane/ American Nazis Seek Foothold in Spokane.” The concern wasn’t for Germans, it was the American far-right Silver Legion, also known as the Silver Shirts. Led by William Dudley Pelley, who envisioned himself the “American Hitler,” the group espoused an Americanized fascism wrapped in the banner of the so-called Christian Party. Pelley’s base was in North Carolina, but he ran a national organization that was virulently antisemitic. The Chronicle’s story was triggered by the appearance of Silver Shirt propaganda leaflets in downtown Spokane.

By 1936, the Silver Shirts were established throughout Washington state, from Puget Sound to Spokane. In 1936, Pelley ran for president on the Christian Party ticket and made his headquarters in Seattle that year. He also had a lodge built in Redmond that was the group’s local “camp.” Pelley, of course, didn’t win the election, but he recruited a number of locals who helped lead the organization. One of these was a Seattle Silver Shirt named Roy Zachary, who was made “field marshal” of the Silver Legion, which numbered about 15,000 nationally, with many thousands more subscribing to its publications. 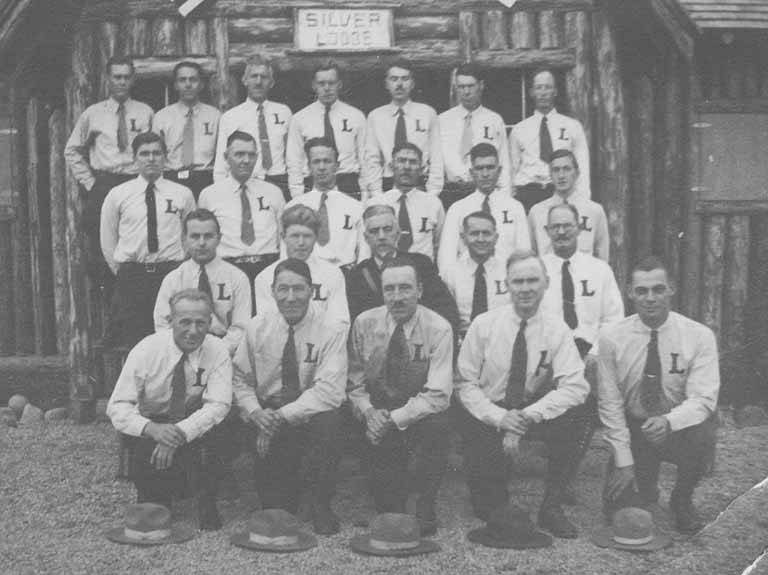 William Pelley and Silver Legion members in front of the Silver Lodge, Redmond, Washington, probably 1936. William Dudley Pelley (1890-1965) studied Hitler's philosophies and speeches, and was inspired to form the Silver Legion of America (also known as the "Silver Shirts") in 1933. The Silver Legion was a paramilitary organization that was modeled off of Hitler's Brownshirts. The organization portrayed themselves as a Protestant Christian movement created to restore a new Christian led society and government. (Courtesy of University of Washington, Special Collections, SOC13714)

William Pelley and Silver Legion members in front of the Silver Lodge, Redmond, Washington, probably 1936. William Dudley Pelley (1890-1965) studied Hitler's philosophies and speeches, and was inspired to form the Silver Legion of America (also known as the "Silver Shirts") in 1933. The Silver Legion was a paramilitary organization that was modeled off of Hitler's Brownshirts. The organization portrayed themselves as a Protestant Christian movement created to restore a new Christian led society and government. (Courtesy of University of Washington, Special Collections, SOC13714)

Zachary traveled the country preaching the Silver Shirt cause, which positioned Jews as the enemy and Pelley as the man who would lead his followers against communism to a new constitutional authoritarian state, of which Pelley would be the God-anointed ruler, a “white king,” he called himself. While claiming the legion was not violent, the group bought smuggled arms from the military, engaged in training, wore uniforms and, in one case, Zachary pledged that if no one else would kill President Franklin Roosevelt, he would do it personally.

On July 18, 1938 Zachary spoke at the Red Men’s Hall on Riverside Avenue in Spokane, and 700 protesters showed up, too, for “Spokane’s first anti-fascist demonstration,” the Spokesman-Review reported. Signs read, “Spokane wants no more Silver Shirt fascism meetings” and “This is Spokane, not Berlin.”

Right in the thick of the protest was Margaret Weaver, who was one of four female and seven male protesters to be arrested, accused of blocking the sidewalk and refusing to disperse. They were held for a few hours and released on a $15 bond each.

Weaver’s picture ran in the paper under the heading, “Woman Prefers Jail to Fascism.” The accompanying article read, “Yesterday the clear-eyed attractive Stanford graduate psychologist, and member of a prominent Spokane family, said she would do it again as no sacrifice was too great to stop the spread of fascism.” The article noted that she was a “communist,” but she said she was not there representing the party but The League for the Preservation of Peace and Democracy.

Weaver thought the arrest of peaceful protesters was silly. “Why I have done the same thing in New York hundreds of times … as for going to jail for doing so, my old hometown was the first to insist upon it.” Weaver had the support of her father, who told the paper, “These young people must stand up for what they think is right.”

The charges against all 11 were later dropped. Weaver was unrepentant and the Spokesman-Review followed with a story saying, “Police Watching Miss M. Weaver.” A city lawyer observed, “She does not shun the limelight, to say the least.” 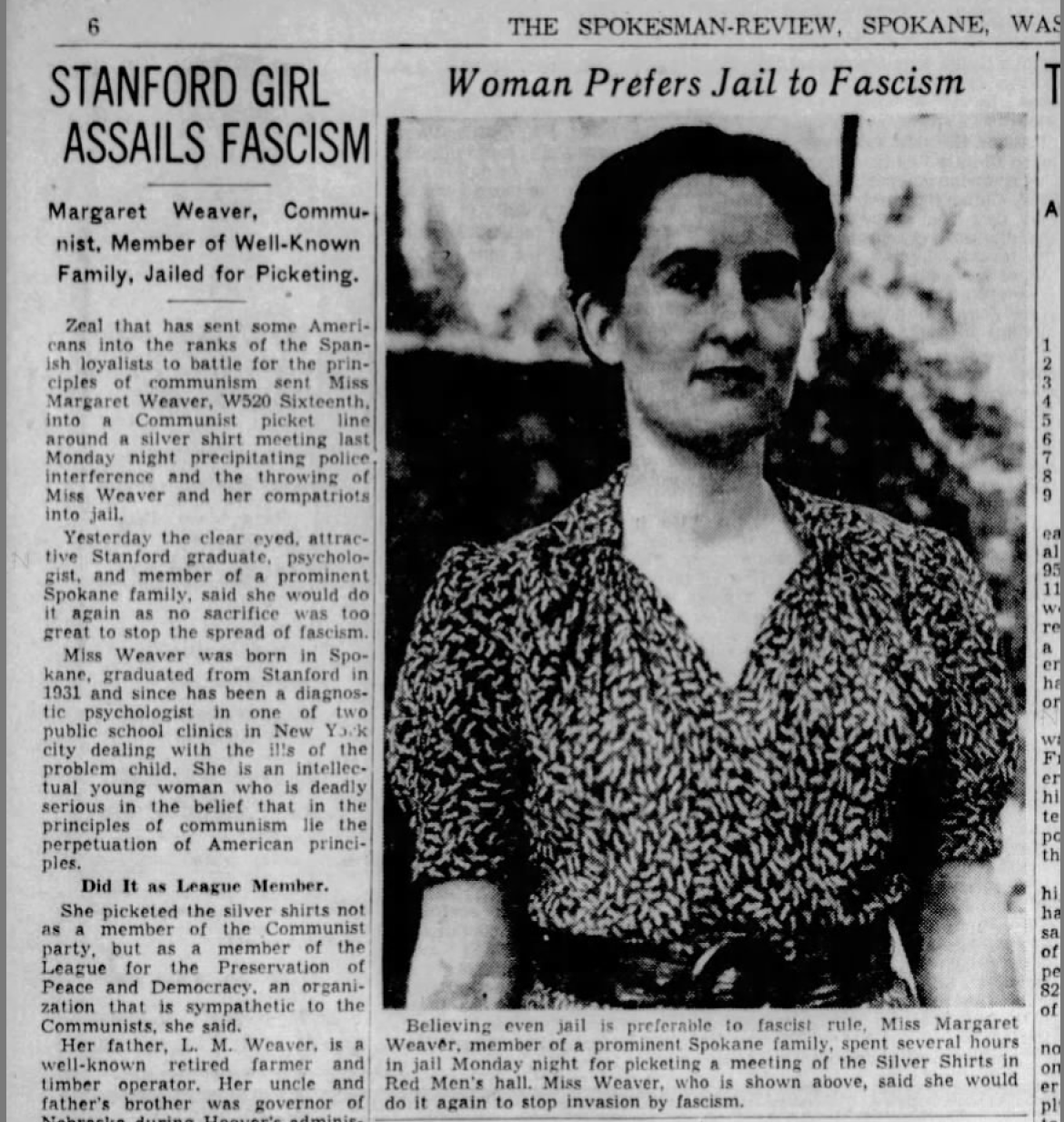 An article and photo of Margaret Weaver ran in the Sunday, July 24, 1938 Spokane Spokesman-Review after she was jailed for picketing a meeting of the silver shirts, a fascist paramilitary organization modeled off Hitler’s Brownshirts. (Courtesy of the Spokesman-Review)

An article and photo of Margaret Weaver ran in the Sunday, July 24, 1938 Spokane Spokesman-Review after she was jailed for picketing a meeting of the silver shirts, a fascist paramilitary organization modeled off Hitler’s Brownshirts. (Courtesy of the Spokesman-Review)

Silver Shirts kept coming to Spokane for occasional speeches. One was Orville Roundtree of Chehalis, head of Washington’s Silver Legion Chapter who railed the Jews and war refugees that the U.S. had taken in. The Silvers found their options limited, however, as more Spokane venues refused to rent to them. Protests continued, mainly by folks who attended the lectures to question and debate speakers.

Elsewhere things got rougher. Roy Zachary had to cancel a return visit to Spokane in 1939 because of a beating he received after a speech in Chicago. Protests, investigations and scrutiny from Congress exposed the Silver Shirts. William Dudley Pelley went to prison for fraud and, during World War II, for sedition. Zachary was banned from the West Coast during the war. The organization fell into obscurity, but the revival of far-right movements after the war often featured prominent roles by former Silvers. Many of today’s far-right groups promote ideologies and use tactics that are clearly from the Pelley playbook.

Margaret Weaver married Mac Blair and the two moved to San Pedro, California, a major port, to do waterfront labor and political organizing there. During the McCarthy years, because Blair was not a citizen, the communist couple moved to Mexico. In the late 1960s she was said to be still living there, but she later returned to California.

Her activism is a reminder that there’s a history of anti-fascist protest dating back to the 1930s, and that a daughter of Spokane once led the charge.