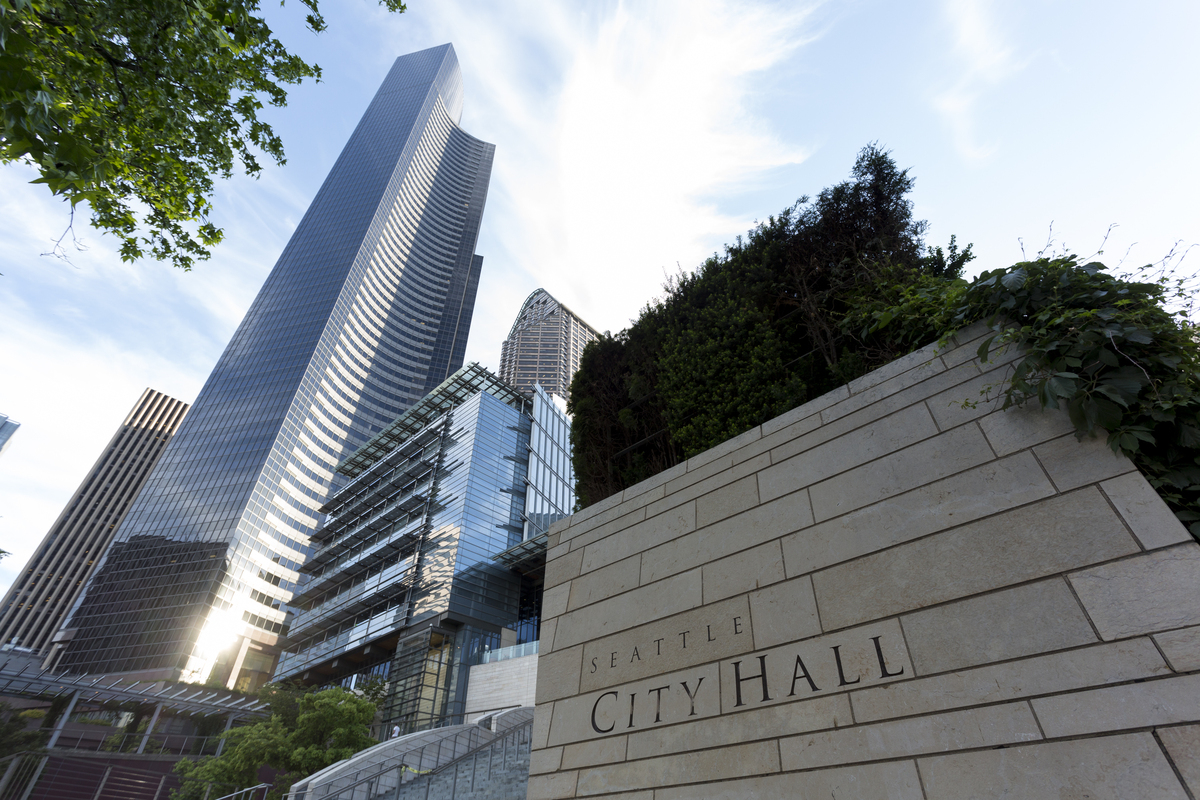 Just under 12 hours after the chairs were cleared from the Langston Hughes Performing Arts Center community room, where Councilmember Kshama Sawant addressed a disappointed election night crowd, the endangered two-term incumbent strode behind the dais at City Hall Wednesday morning to get on with city’s budget deliberations.

As she did, her colleague, Councilmember Lorena González — who, after endorsing Sawant’s opponent in the primary, supported her in the final weeks — walked up to Sawant and gave her a hug.

“I appreciate as a council member, having gone through an election and a reelection, that these elections can be really hard,” González told Crosscut Wednesday. “I think this was a particularly tough election season for all of us at the city and sometimes it’s nice to express a little emotional support for your colleagues. I congratulated her on the campaign that she’s run so far and acknowledged that there’s a lot of ballots yet to be counted, and we don’t know what the outcome of the election is until the last ballot is counted.”

Sawant currently trails Egan Orion by more than 8 percentage points, but she’s holding out hope that late ballots will bring her back from the brink.

Councilmember Lisa Herbold — who, unlike Sawant, has a clear path to reelection — received hugs as well, from Sawant, González and Councilmember Sally Bagshaw, although these were more congratulatory than encouraging.

Waking up Wednesday morning, City Hall found itself picking through the pieces of the night before. Councilmember-elect Alex Pedersen sat in on the council’s budget meeting, taking notes. As the incumbents on Tuesday’s ballot tried their best to stay focused on the work, those who weren’t up for reelection surveyed their new colleagues or predecessors.

For an election that was ostensibly a referendum on city government, there was a sense of surprise at City Hall over who would be joining the council. Change is coming to the council, yes — a predetermined outcome with four incumbents opting not to seek another term. But the results, which didn’t take the moderate swing that some predicted, are hardly a rebuke of the sitting council and may in fact strengthen the hands of some of the body’s more labor-aligned members.

“I think there’s a lot of opportunity for us to write a new chapter and to have that chapter be laser focused on issues related to housing affordability, continued progress on the issues related to homelessness and, of course, addressing the transportation needs of everybody in the city,” said González.

But any pleasure taken from the results of the council races was clouded by a new reality that lands hard in the middle of budget season: the apparent passage of Initiative 976, a measure that will cut all car-tab fees across the state to a flat $30.

The initiative’s likely success will have broad implications for transportation projects across the state. In Seattle, it puts at least $32 million a year in the city’s transportation benefits district on the chopping block. That cut would mean the elimination of 175,000 bus hours, according to King County Metro. Millions dedicated to road maintenance is also at risk.

"The cuts required by this initiative would be potentially catastrophic for Seattle and our region," Mayor Jenny Durkan said in a press release Wednesday.

Bagshaw, who chairs the budget discussion, said the council is still assessing the possible impacts of the initiative. “I’m not going to know until tomorrow,” she said. “We’re going to probably have an executive session with the lawyers, and we’ll talk about what we’re going to do.”

“We’re going to be working in strong coordination with the Mayor’s Office and regional partners to figure out what the impacts are,” Gonzalez said. “We’re taking it one day at a time right now to figure out what it ultimately means if it does pass.”

Asked if the city had prepared enough for the possibility of its passage, González said, “I think so. I think we have some contingency plans in place.”

On Wednesday, Durkan said she and City Attorney Pete Holmes would file a lawsuit to try and prevent I-976 from taking effect, with details to be unveiled Thursday.

Bagshaw said the priorities of the budget remain the same: housing, homelessness and criminal justice. As it stands now, the lauded prearrest Law Enforcement Assisted Diversion program is slated to get an extra $3.5 million a year. A new youth homelessness shelter, health clinic, mobile bathrooms and a whole slate of other nontransportation measures are still moving forward in the budget.

Those priorities are funded through the city’s unrestricted general fund. The rearranging that will come as a result of I-976 is likely to be self-contained within the city transportation department.

“SDOT’s budget is different, in the sense that we do have to take into consideration revenue sources that don’t come through our general fund and that’s where priorities will need to be delineated in the face of understanding the impacts of 976,” said González.

Bagshaw said she’s hopeful some projects — including a revamped Thomas Street, the “Market to MOHAI” pedestrian corridor and the redesign of Fortson Square in Pioneer Square — can continue, but even that’s unclear. A waterfront shuttle will surely not get city funding, she said.

“I just feel like we’ve made promises, and we’ve got to figure out a way to keep them,” she said. “But it does make me so mad.”

Councilmember Herbold on Wednesday made the first specific proposal to address the shortfall: redirect revenue from a proposed additional tax on Uber and Lyft rides away from a new streetcar connection to backfill bus service. González, however, said she felt council members should get a broader view of what’s at stake before offering competing proposals.

The council will vote on a final budget around Thanksgiving. And after that, the makeup of the council will begin to shift. Pedersen will take office at the end of November, when the results are certified, taking over from Abel Pacheco, the interim District 4 council member. The rest of the new members will take their seats in the new year.

In the long-shot scenario where Sawant survives, she will be the council’s most veteran council member. If not, González assumes that status — besting Herbold and Councilmember Debora Juarez by two months. That would put her in line to be council president — although, she joked, she may end up there even if Sawant, who’s famously isolated from her colleagues, manages to hang on.