From restaurants to shellfish farmers, the outbreak is already hurting the state's economy. 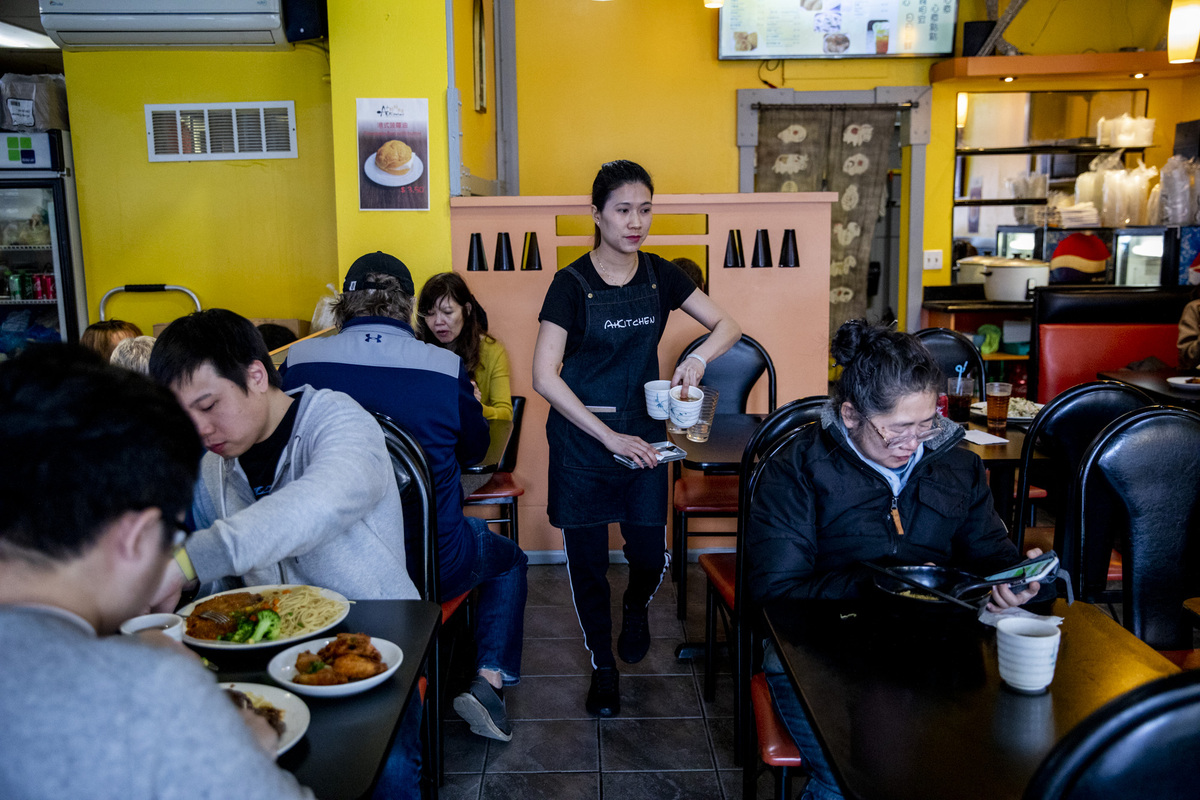 Summer Wu, a waitress at A+ Kitchen in the International District, clears tables on Feb. 28, 2020. The restaurant has seen a 50 percent drop in sales in the last two weeks. (Dorothy Edwards/Crosscut)

In the muddy tideflats of South Puget Sound, geoduck farmer Jim Gibbons was gearing up for a banner month in January. Each day, up to 6,000 pounds of orders were pouring in to his company, Seattle Shellfish. Geoducks make up 85 percent of the company’s revenue, and most of those orders come from Asia, mostly China, where the uniquely Salish Sea shellfish is a popular delicacy for Lunar New Year celebrations.

Until Thursday, Jan. 23, the day before the new year. “That was the day Wuhan shut down,” Gibbons told Crosscut via phone. “And we haven’t sold any to China since then.”

The plight of shellfish farmers selling the Pacific Northwest’s iconic burrowing clam is just one of the early economic impacts of the COVID-19 coronavirus on businesses operating in Washington. With multiple deaths in the state reported since the weekend, this is a developing story and those impacts are likely to accelerate as more local businesses temporarily close their doors, suspend travel or lose export opportunities.

Home cooks eager for a taste of Puget Sound geoduck can find them filling an aquarium at Uwajimaya, the Asian grocery store that anchors Seattle’s Chinatown-International District. Nearby restaurants have seen sales decline precipitously in the wake of the coronavirus scare. Hoi Ming Chim co-owns popular Cantonese eatery A+ Hong Kong Kitchen, which has a prime location facing Hing Hay Park.

“Two weeks ago it got really bad, we were down 50 percent,” he told Crosscut. But the Friday lunch rush was full, with patrons waiting for tables. What changed? “After the mayor said something, it really helped a lot,” he said.

“Community leaders have expressed frustrations regarding misplaced fear and false information that are currently negatively impacting some small business owners and residents, especially in the CID,” a mayoral spokesperson said.

Those fears have taken a toll at Fortune Garden, a Cantonese seafood restaurant on the other end of Hing Hay Park. Business is down 60 percent, says owner Amy Zhang, with only one or two customers per day coming in for popular dishes like honey walnut prawns and seafood hot pot.

“We hope it will be better in two to three months, but right now we’re barely staying open,” Zhang said, speaking through a translator. “We don’t know how much longer we can last.”

Weeks before COVID-19 became lethal in Washington, China’s drastic moves to curb the spread of the novel coronavirus kept millions indoors and shuttered seafood restaurants. Since the clampdown in China, Gibbons has laid off 35 employees from his geoduck business, over half of his workforce.

The coronavirus compounded the effect of Chinese tariffs on shellfish. The tariffs established in July 2018 and ratcheted up in August 2019 were retaliation for tariffs the U.S. slapped on its transpacific trading partner as part of President Donald Trump’s trade war.

“The tariffs impacted price and demand,” said Bill Dewey, director of public affairs for Taylor Shellfish, another Washington seafood farmer. “Coronavirus was the nail in the coffin.” 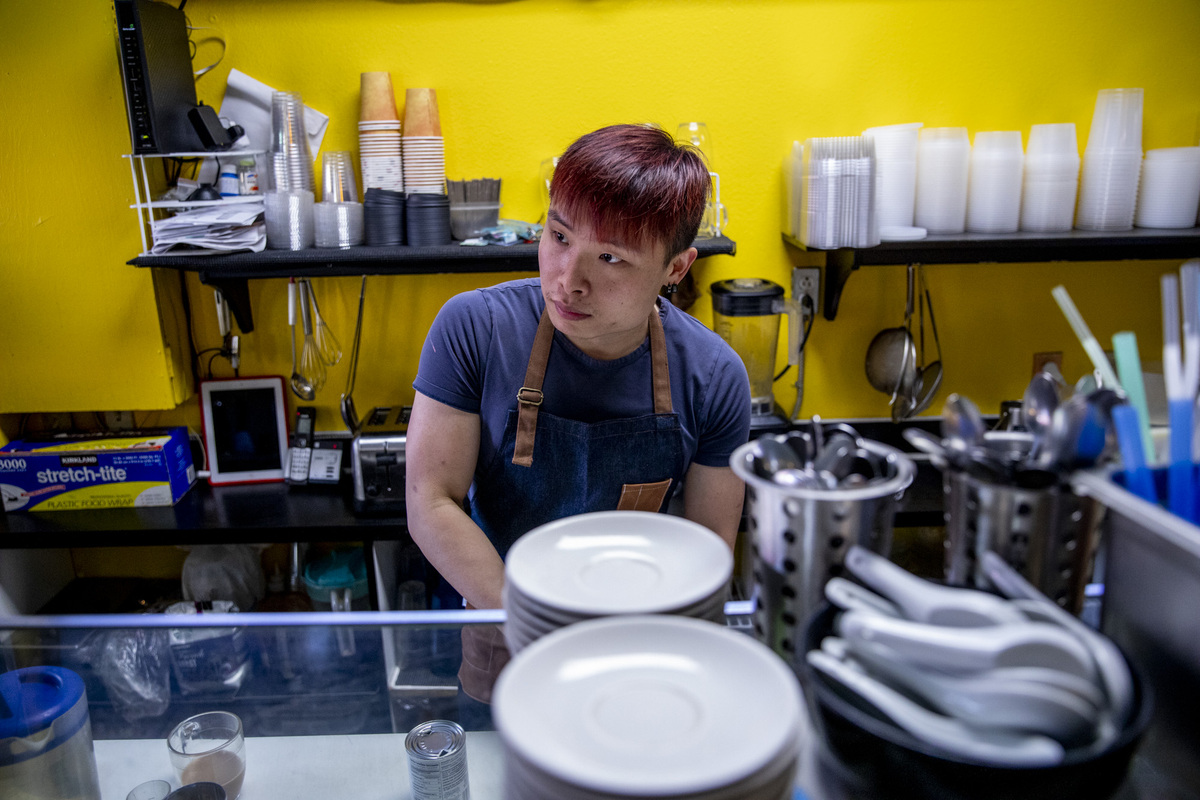 Taylor, which operates oyster bars in Seattle and Bellevue and shellfish markets in Shelton and Bow, has temporarily laid off 40 employees out of a statewide workforce of around 700. Salaried employees have taken a 10% pay cut and Taylor family members who work for the company have taken a 20% pay cut.

Geoducks are big business for Washington, the world’s largest producer of the undeniably phallic-shaped bivalve. The state exports 11 million pounds annually, according to the Department of Natural Resources’ Joe Smillie. Some 5 million pounds are wild harvested under the terms of a DNR administered auction that raises up to $25 million for state aquatic conservation projects, including Puget Sound restoration.

While there is no doubt about coronavirus’ impact on geoduck sales, the picture is less clear for a number of other Washington trade- and travel-based businesses given how recent the outbreak is relative to monthly economic statistics.

The Northwest Seaport Alliance reports a tentative 25 percent decrease in container cargo in February, according to a Port of Seattle spokesperson, but monthly figures will not be ready until mid-March. Delta and Hainan Airlines canceled flights from mainland China to Seattle-Tacoma International Airport in early February, which airport spokesperson Perry Cooper estimates would have brought 600-800 passengers per day. Delta has also reduced the frequency of its Seoul-Incheon flight from daily to five times per week through April 30. The airport sees 6,300 international arrivals on a normal day, but February passenger numbers will not be available until March 20.

On Feb. 27, Visit Seattle issued an alert to the local travel and hospitality industry projecting a 28 percent decrease in Chinese visits to the area in 2020. China is Seattle’s top overseas travel market, although the alert points out that international visitors constitute only 10 percent of the regional tourism market. That means local residents can expect to see fewer Chinese tour groups at the Space Needle, Snoqualmie Falls, Boeing’s Future of Flight tour, and nearby outlet malls.

“In general they want shopping,” Visit Seattle’s David Blandford told Crosscut. “The Chinese market is still very enamored with a lot of the top visitor attractions. They want to see what is famous about Seattle in China, in addition to shopping.” The Bellevue Collection reports no decrease in sales thus far.

No Seattle conventions have been canceled but Blandford has reports of some smaller business meetings with Chinese delegations that are on hold. Seattle-based F5 Networks postponed its annual Agility conference, slated for mid-March in Orlando, and has halted all non-essential business travel after closing its downtown Seattle office tower on Monday after the company learned that “an employee has been in contact with an individual who tested positive for COVID-19,” the Seattle Times reported.

Such moves could be the tip of the iceberg, although the situation is fluid. “We’re preparing for a global travel crisis,” Blandford said, though he was confident about the state and local response. “Washington state is maintaining a strong profile in the COVID-19 outbreak nationally, but we are encouraged at the state and county level that public health officials are getting out in front: Testing is enhanced and information is flowing well.”

The Port of Seattle has gained some additional cruise business because of the coronavirus, with the Celebrity Millennium scheduled to pull into Elliott Bay for five sailings in April and May in lieu of previously planned Asian cruises. Seattle-based Holland America scrambled to reroute the Westerdam, whose 1,455 guests and 802 crew left Hong Kong on Feb. 1 but were denied entry to several ports of call before ending the trip early in Sihanoukville, Cambodia on Feb. 14. The ship’s scheduled sailings in March and April from Yokohama, Japan have all been canceled.