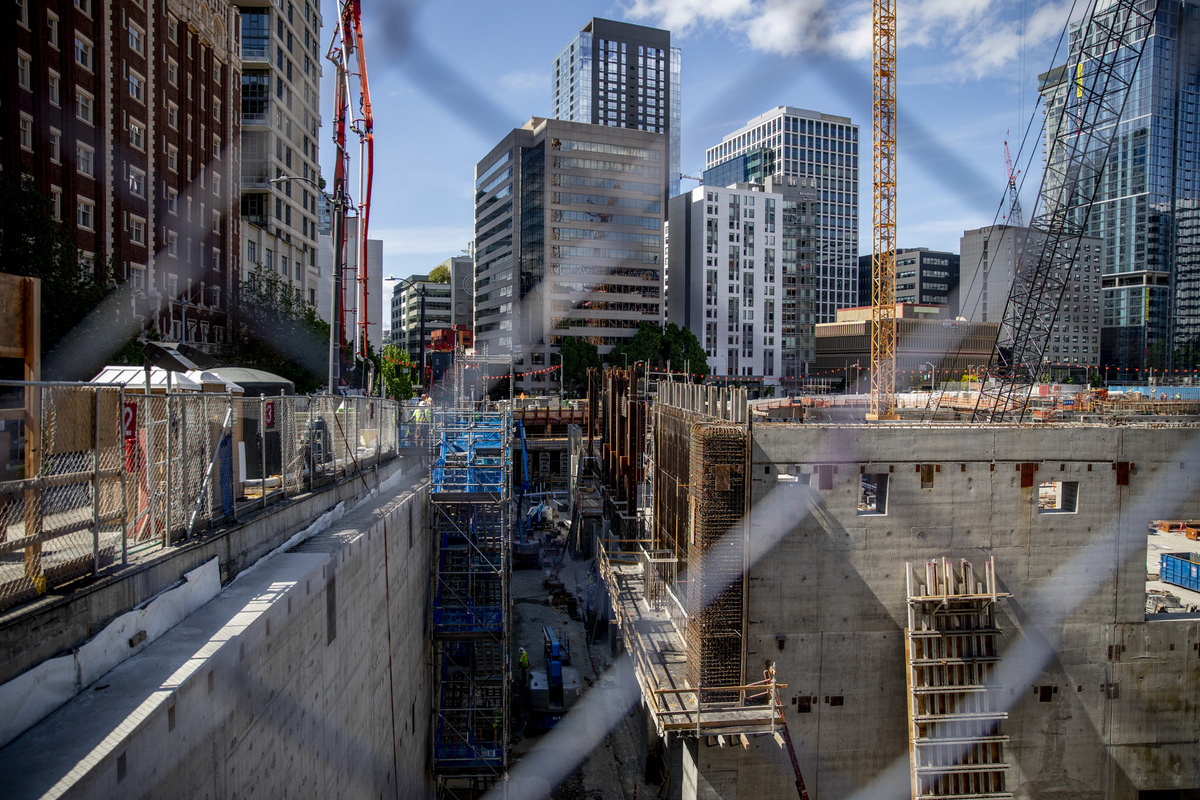 Construction of the Washington State Convention Center addition — among the largest and most expensive projects in Seattle’s history — is in danger of running out of money in the next 10 to 12 months as a result of the COVID-19 pandemic.

If it does, work on the partly completed addition would halt, said Matt Griffin of Pine Street Group, the project’s lead developer, leaving a hole in the heart of downtown. Because the fate of the convention center expansion project is closely tied to the outlook for downtown Seattle as a whole, both business and government leaders are holding their breath.

The new development, whose steel frames already tower over Interstate 5, broke ground in 2018 and is about 30% complete. But the roughly $1.8 billion project still needs an additional $300 million in financing. Griffin said the convention center had planned to issue two new bonds over the next six to nine months to cover the gap. But those bonds were to be backed by taxes on lodging, which have all but evaporated during the pandemic. Investor interest has disappeared with it.

“We are in a financing crisis,” said Griffin, adding, “Obviously it’s bad.”

When compared with similar projects in other parts of the country, Washington’s convention center project had been viewed favorably by investors and rating agencies. Griffin said the project should have enough in reserves to meet current debt obligations, at least in the short term.

But without additional dollars, it will no longer be able to afford paying contractors in 2021. Roughly 1,000 people were slated to work on the project a year from now and they would all be out of work, Griffin said. Delays of two to four years could increase the cost of the project by as much as 30%, he said.

With local and state governments facing their own fiscal crises, Griffin said hopes for saving the project hinge mostly on the federal government.

The first rounds of economic relief from Washington, D.C., left out large-scale projects like the convention center expansion. Griffin hopes Congress passes another round of relief, one that includes investments for infrastructure. He said his team has been in touch with both of Washington’s senators, Maria Cantwell and Patty Murray, as well as a handful of local congressional representatives.

“We’ve got to make sure that the bills coming out of Congress provide for this kind of entity and provide for a project that is under construction and needs to keep from being stopped,” he said.

In a statement, Sen. Murray said, "I’ve been in contact with folks on the ground and know how important the convention center is to the city of Seattle and its economy moving forward, especially in light of the current crisis. I am working now to explore what can be done at the federal level to help support the project’s timely completion.”

Senate Majority Leader Mitch McConnell has said he supports only a “modest” infrastructure package not directly tied to the coronavirus pandemic.

Representatives from Pine Street Group said they would also pursue other alternatives, including obtaining a bridge loan that would be paid back in four to eight years.

The fate of the convention center could have broad implications for downtown Seattle, which is already staring down a challenging next several years.

Facing competition from internet retailers and business centers in Bellevue and the University District, downtown increasingly relies on business from domestic and international travelers, many of whom come for conventions, said Jon Scholes, president and CEO of the Downtown Seattle Association. The coronavirus has accelerated the downward spirals of brick-and-mortar retailers; losing the convention center would remove what many of those businesses had viewed as a lifeline.

“If you talk to folks like Nordstrom, they made a $100 million investment in their flagship store, really believing in the convention center project as a key driver of more demand,” Scholes said. “There’s lots of folks that were counting on this for their own economics, and they see those convention goers as their customers.”

At nearly 1.5 million square feet, the addition to the convention center was one piece of the massive reshaping of downtown Seattle, which also includes the demolition of the Alaskan Way Viaduct, an expansion of Pike Place Market and a new waterfront walkway and park. Its size and price tag easily dwarf the construction or redevelopment of all three pro sports stadiums in the city and make it what some have called “the single largest construction effort in Seattle history.”

Its boosters tout the project’s potential economic benefits as significant. “We need Congress to help fix the financing so our state can keep this project on track,” said Markham McIntyre, executive vice president of the Seattle Metropolitan Chamber of Commerce. “In addition to keeping people working, once it is complete, the expanded capacity from the addition will bring in an estimated $260 million annually in visitor spending, as well as an estimated $19 million in annual tax revenue from that spending.”

Others have expressed skepticism about the project.

The convention center agreed to pay out more than $90 million in public benefits, toward things like affordable housing. Griffin said those benefits have mostly been paid out.

The convention center and its expansion are operated as a public facilities district with independent taxing authority.

To build it, the district sold the two largest bonds it could at the time, based on past revenue from taxes on hotels, motels and short-term rentals, totaling about $1.1 billion. With those taxes steadily increasing, Griffin expected the convention center to take out additional bonds in the coming months to secure the rest of the project’s budget.

Moody’s gave the bonds strong credit ratings at the time. An analysis of lodging tax revenue performed in advance of the bond sales predicted annual growth rates of 4%. Seattle “is poised to provide strong demand for hotel rooms and conference facilities in the area for years to come,” the analysts predicted.

“You go back a year or so and betting on the Seattle economy? Holy moly,” said Griffin.

So far in 2020, however, lodging tax revenue is just a fraction of what it was in 2019. The Washington State Department of Revenue has not yet released the extent of the decline, but Griffin said he believes this year's cash flow is about 10 percent of last year's.

In the current climate, it could be a long time before there’s any appetite for new financing of tourism-driven projects, said Justin Marlowe, endowed professor of public finance and civic engagement at the Evans School of Public Policy and Governance at the University of Washington.

As a result, the fate of convention centers and hotels across the country is in doubt, he said.

“Clearly there’s a feeling out there among investors that this sector of the municipal bond market is in really bad shape and may not recover,” he said. “It may be extremely difficult to get that money in the future,” he added.

“If I were advising them I’d say, ‘Don’t sit around and wait for those revenues to come back to their pre-COVID levels because they’re probably not going to,’ ” Marlowe said.

The Washington State Convention Center is likely better positioned than other similar projects, said Marlowe. In Kansas City, for example, the convention center was built in hopes of creating demand, while in Seattle the demand was already there.

But, said Marlowe, “Going forward, even really strong projects like the Washington State Convention Center might have trouble financing, simply because there’s just not going to be the investor pool for these bonds that there’s been for the last 20 years.”