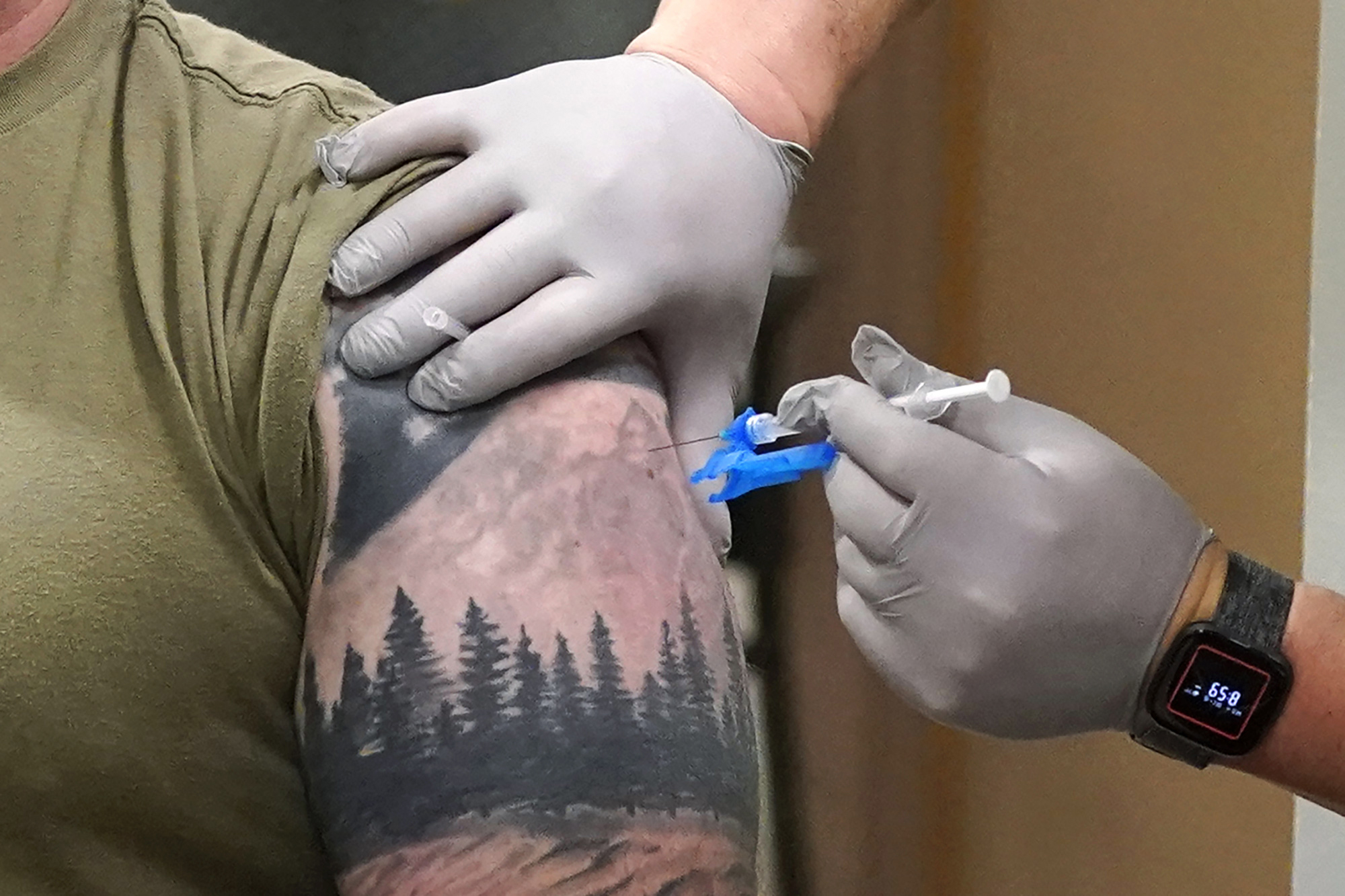 Maj. Jeffery Wittkopp, a physician assistant in the emergency department at Madigan Army Medical Center, receives one of the first doses of the Pfizer vaccine for COVID-19, Dec. 16, 2020, at Joint Base Lewis-McChord in Washington state, south of Seattle. (Ted S. Warren/AP)

Nobody said distributing a brand new vaccine to more than 200 million people over about seven months would be easy. But the confusion over how, when and where to get a COVID-19 vaccine has been overwhelming.

If this is your question, here’s the best information we’ve been able to gather from state and local health officials.

Washington state launched phase 1A of its vaccine effort in December, vaccinating medical workers and people living or working in nursing homes. Gov. Jay Inslee announced Monday that phase 1B is beginning. That phase includes everyone 65 and older, plus people 50 and older who live in multi-generational households. Many seniors have already received their first dose of the vaccine at nursing homes, in assisted living facilities and in other congregate settings, including some senior apartments.

The rest of you, who haven’t had access to the vaccine already, are likely confused and frustrated. That is not likely to change as the vaccination effort widens but the state is taking a step toward better communication as it launches a tool on its website called the “phase finder” that allows you to check your eligibility and sign up to be notified when it’s your turn to get vaccinated. The phase finder asks questions about your work, your age and your health. If you want a general idea of where you fit in the order of things, check out this phase chart and the accompanying information.

Getting the vaccine once you’re eligible is still going to be more complicated and frustrating, at least at first, than getting a flu vaccine. But in addition to notifying you by email or text message that your phase is open, the phase finder will also tell you where to sign up to get a coronavirus vaccine.

Some counties’ public health departments have set up community vaccine sites where anyone who qualifies for the current phase can drive up to get vaccinated. Hospitals, pharmacies and some doctors offices are also getting ready for mass vaccination, but you will probably have to wait in line, either virtually or in the real world.

Danielle Koenig, health promotion supervisor with the state Health Department, requests Washingtonians not call their doctor or pharmacy or health department until their phase opens.

We’ve all heard of people trying to jump the line and sign up to receive a vaccine before their turn. Is this even possible? Yes, you can sneak in line by lying on the phase finder, although it probably won’t be possible to lie about your age when you go to get the vaccine unless fake IDs become a growing black market amongst senior citizens.

Phase 1B is a big group and some people in phase 1A (doctors, nurses, other medical personnel plus nursing home residents) are still being vaccinated, so competition for vaccine supply will continue to be high for at least the next few months.

Although the federal government has announced it will be speeding up distribution of vaccine doses to the states, Dr. Umair Shah, Washington’s health secretary, said last week that the state won’t be speeding up its move into new phases until it has more concrete evidence that Washington will have a big enough — and steady enough — supply to meet that demand.

As of last week, Washington reported that it had received 624,975 doses of the vaccine and 201,660 doses had been administered. Those numbers, though, were already outdated when they were announced in the middle of last week. Assistant Health Secretary Michele Roberts said it takes a few days for the state to get vaccine administration data from the local health departments. State officials are working with Microsoft to provide a more efficient and frequent way to update these numbers.

Roberts acknowledged how frustrating this time period is for people who desperately want to get vaccinated. Opening up multiple phases at once will just make the line longer, she said. “But you’re not actually helping people get vaccines because there’s not enough supply.”

The next phase after medical personnel, nursing homes and people 65 and over is phase 2B, which includes high risk critical workers over 50 years old, including school employees, grocery workers, people who work in agriculture and food processing, bus drivers, law enforcement and firefighters. See this chart for more details about who fits in this group, but be sure to read the second page with lists of people who fit in each category.

The state vaccine phase chart estimates Washington would move into phase 2B in February, and phase 3B (people with other serious health challenges that make coronavirus more dangerous for them) in March. But some health department documents seem to indicate the “B” phases could launch more quickly or even simultaneously.

A lot of things could happen from this week to the next.

For one, President-elect Joe Biden, who will be inaugurated on Wednesday, has promised to get vaccine doses out to the states more quickly. He could also make some changes in vaccine distribution by attempting to standardize approaches across the country. While some states are already vaccinating people 65 and older, many, including Washington, are taking a different approach.

The phases and the order of vaccines will likely continue to evolve over the next few months. If you have further questions, look at the FAQs on the Department of Health website. And we will do our best to keep the Crosscut Q&A page up to date.

Updates to show Phase 1B is starting and now includes everyone 65 and older.

How King County is preparing for extreme heat this summer

With wounds from last year's heat dome still raw, the county assesses its preparedness to keep cool in a warming climate.