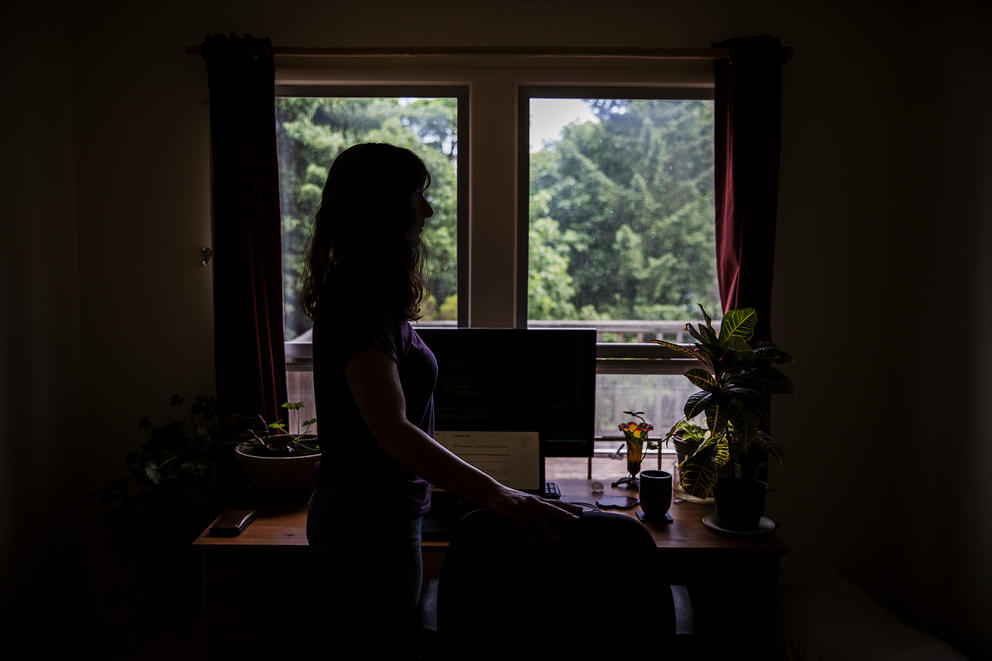 Melanie in her home office in Seattle on June 4, 2021. She says she doesn’t not plan on going back to work in person when her company reopens offices. (Dorothy Edwards/Crosscut)

After a year working from home, Melanie doesn’t want to go back to the office. So much so that when the downtown logistics company where she works as a software developer requires workers back at their desks, she will likely start job hunting.

“I don’t think there is any going back to working in the concrete jungle of downtown,” she said.

In her home office, she has a window seat and she’s able to sneak in a yoga session during lunch.

“It feels so much less stressful. I love the quiet and I can concentrate much better,” said Melanie, who asked that her last name not be used because she is worried about the reaction from her company. “In the office, I had to put on headphones to drown out the sound.”

The former music and French teacher lives in Seattle to be close to jobs, but prefers living in the countryside at least part time, something a remote job would allow.

Melanie’s company recently announced that, when the office reopens, employees will only be allowed to work from home once in a while. But that’s not enough for Melanie, who says she wouldn’t quit if the company said she would need to come in only a few times a week.

She isn’t alone — many employees covet the flexibility that comes with working from home.

If a large percentage of workers continue to skip the commute, that could leave a lasting dent on the region’s transit ridership. About a quarter of people who rode public transportation before the pandemic may never ride again, according to an April Crosscut/Elway Poll.

Tim Ellis plans to get back on the bus at some point, though not for a daily commute.

Snug in his home office in Everett, Ellis’ much-shortened commute is now just a few stairs. With a revamped work-from-home policy coming from the online real estate company he works for, Ellis plans on venturing into the office only a few times a month for meetings.

This policy change also dispersed Ellis’ team. Two colleagues relocated across the country, and a new hire plans to stay in Chicago, he said.

“People have the flexibility to live where they want,” Ellis said.

Some people, however, are ready to get back in the office. At Hewitt, an architectural firm, many are eager to get back working in the office most days, said Paul Shema, president of the downtown Seattle company.

“The way we were used to working was very collaborative,”  Shema said. “That isn’t impossible in the remote world, but it's not easy.”

While most people will likely revert to being mostly in the office, he envisions some might start or end the day working from home.

Few are staying fully remote, and few are demanding workers come to the office every day, Scholes said, which gives employers flexibility over when and where they work.

With only a handful of downtown offices shutting down completely, employers are keeping around another perk from pre-pandemic days  —  the transit pass. 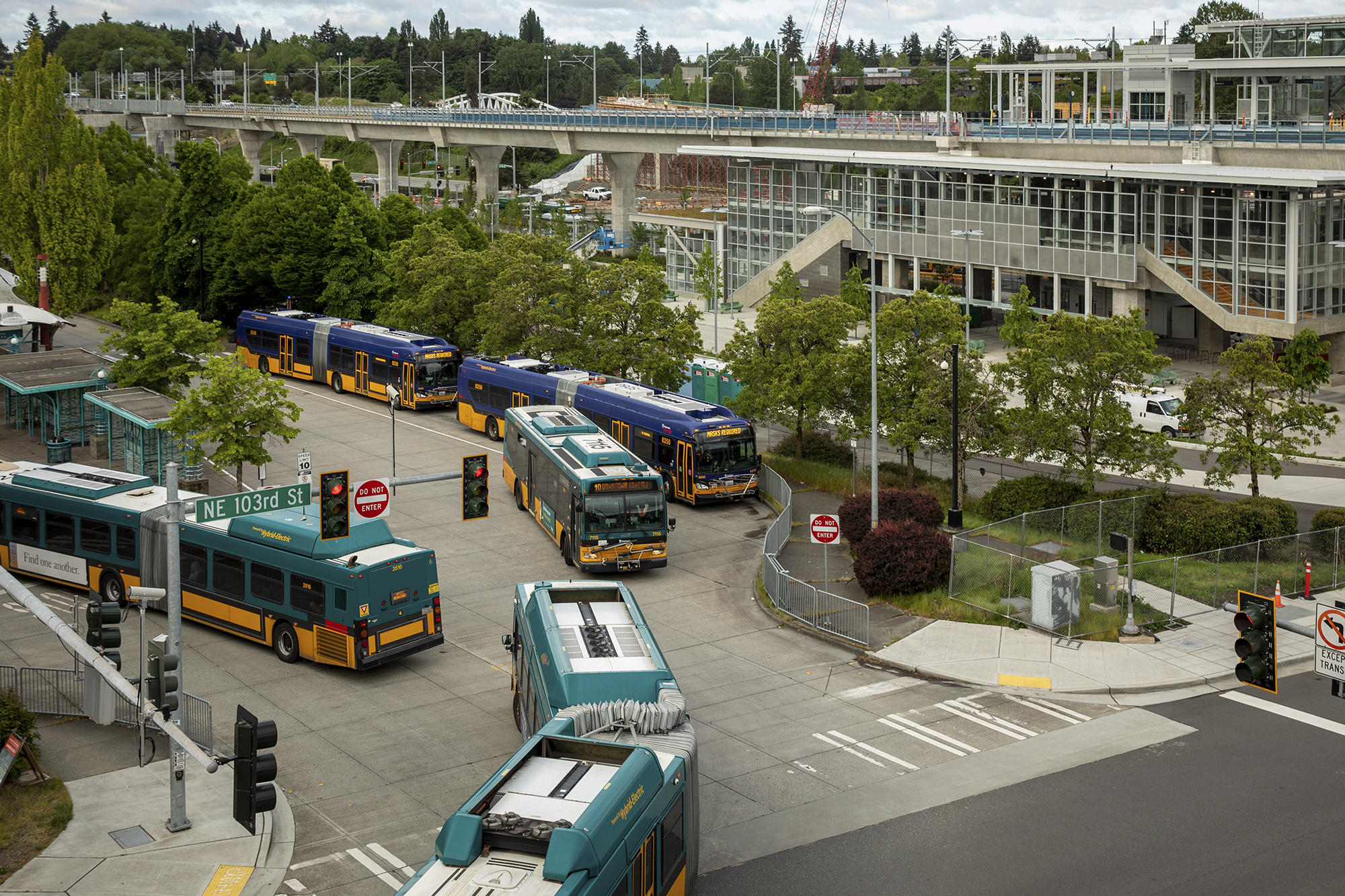 More than half of King County Metro’s fare revenue in 2019 came from transit passes companies provide at a discount, or for free, to employees. All major employers renewed their transit business accounts this year, according to King County Metro Transit. The agency relies heavily on sales tax, which in 2019 made up 57% of total revenue, followed by fares, which represents about a quarter of the budget.

“We’re not seeing employers move away from public transportation and their commitment,” said Chris O'Claire, Metro’s director of mobility.

Before the pandemic, more and more people in the region were riding public transportation, bucking the national trend. Between 2010 and 2018 transit ridership in the Puget Sound grew nearly 20%, according to the Puget Sound Regional Council.

Then ridership plunged more than 70% as those who could do so nestled into home offices and transit agencies pared down. They cut or reduced many peak-hour buses — the ones that shuttled commuters to and from jobs — where large drops in ridership occurred.

Currently the agency is operating at 85% service levels compared with before the pandemic, while ridership slowly rebounds.

Service cuts are looming in 2025 if fares, which account for about a quarter of revenue, and other revenue, such as sales tax, don’t rebound. This could mean a cut of 500,000 service hours, or about 13% of the current level.

“As vaccines get into arms, ridership is at an all time high post-COVID,” O'Claire said. “Our ridership is coming back, but the question is how fast and when will it come back.”

The agency is hearing from employers that they expect half of their workers back in the office by the fall, O’Claire said. The agency plans to add back even more service in October and hopes to bring back service to pre-COVID levels next year.

As demand changes, Metro plans to redistribute some of the peak-hour service to all-day routes to boost frequency. The agency was already moving in that direction. As the Link light rail service expands across the region, Metro plans to transition into a feeder system for Link.

“The future of our system is going to look and feel different,” O’Claire said. “There will always be a peak demand ... but what we are trying to do is get people to use public transportation not just to get to work, but also ... to use it more for their daily activities.”

A lot of the people who truly depend on public transportation are using it throughout the day, according to O’Claire.

In Snohomish County, as ridership follows a similar trend, Community Transit has similar plans — more buses on local routes that stay in the county versus those that trek into Seattle.

“Our plan is to prioritize expansion of routes within Snohomish County,,” Monica Spain, a spokesperson for the agency, said in an email. “This coincides with our focus on connecting customers with light rail, starting with Northgate this fall.”

When light rail comes to Lynnwood, in 2024, more hub busing will be possible, Spain added.

By dropping the bus commute, Melanie, the software developer who wants to remain working from home, reclaimed about an hour and half for herself every day.

“I’ve definitely noticed getting that extra time back in my life,” she said.

As pandemic ebbs, Seattle’s Pride gets back to its roots