Those who want to recall Kshama Sawant say it's about holding her accountable. Her supporters see it as an attack on the socialist council member's progressive policies. 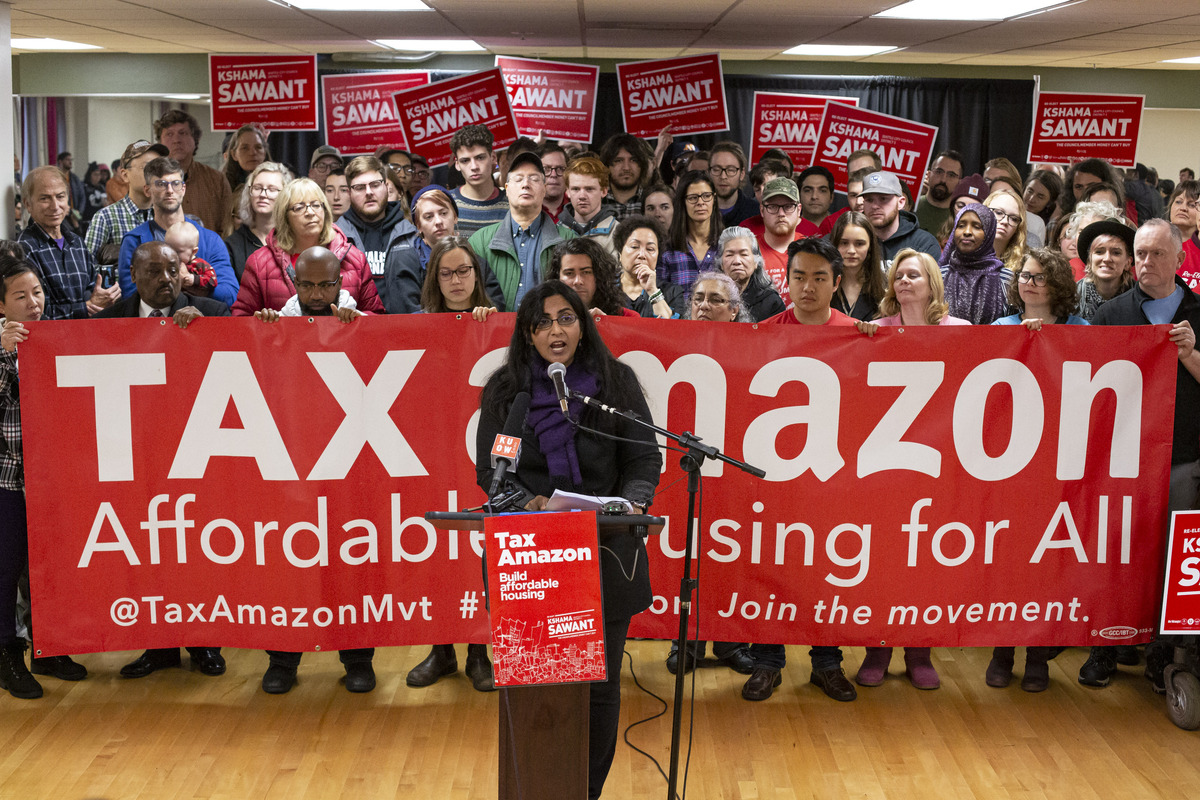 Seattle City Councilmember Kshama Sawant addresses members of the media during a campaign press conference at the Langston Hughes Performing Arts Institute in Seattle in this Nov. 9, 2019, file photo. Sawant is now the target of a recall effort backed by members of the business community. Voters in Seattle’s 3rd Council District will decide on the recall in a Dec. 7 special election. (David Ryder for Crosscut)

Progressive politics are on the ballot again in Seattle. But it’s not clear how many voters in Seattle’s 3rd Council District even know why another election envelope has landed in their mailbox.

Both Kshama Sawant and the people trying to unseat the socialist from the Seattle City Council are hoping to change that before the ballot count begins for the Dec. 7 special election.

Since the summer, Sawant supporters have registered more than 1,000 new voters in the 3rd District. The Kshama Solidarity Campaign aims to gain 2,000 new voters by Dec. 7.

Meanwhile, the Recall Sawant campaign has encouraged voters to donate funds toward the effort. As of Wednesday, they had raised more than $771,500 from around 3,100 people.

For the anti-recall campaign, registering new voters is crucial for getting the vote out during a special election, when fewer voters — especially younger voters — turn out.

“We think that is a crucial ingredient in bringing people out to vote who normally wouldn’t vote in a city election and definitely not in a special election between holidays,” said Bryan Koulouris, spokesman for the Kshama Solidarity Campaign.

The Recall Sawant campaign is now trying to do what business groups — even with the millions in campaign donations they collected over several elections — failed to do: Get Sawant out of office.

Sawant, first elected in 2013, was reelected to another four-year term in 2019, despite a significant financial push by big corporations, including Amazon, and business groups in support of opponent Egan Orion. Sawant represents a district that includes Capitol Hill, parts of the Central District, Montlake and Madison Valley.

The recall campaign is accusing Sawant of breaking her oath of office and several other laws by using city funds to push for a ballot measure in early 2020 to tax Amazon and other large corporations. She opened Seattle City Hall to protesters in the summer of 2020 and participated in a protest against outgoing Mayor Jenny Durkan that revealed her address to the public, a violation of the privacy Durkan maintains as a former U.S. attorney.

“Her behavior represents a pattern of breaking and ignoring the laws that hold our politicians accountable,” said Henry Bridger II, campaign manager and chair of the Recall Sawant campaign. “While in office, Sawant has acted as though the rules don’t apply to her and has run from taking any accountability when she gets caught. District 3 deserves better from its elected officials.”

The Kshama Solidarity Campaign calls the recall a right-wing and racial attack on progressive policies that benefit people of color and other marginalized groups and on the right to peaceful protest.

“There’s a nationwide right-wing backlash against Black Lives Matter that progressives want to stop,” Koulouris said. “We see measures throughout the country to limit the right to protest.”

Indeed, while the recall election involves about 76,000 Seattle residents living in the 3rd District, there’s been plenty of interest throughout the state and even the country.

Both campaigns have attracted contributions from residents throughout Washington state and the U.S.  The Kshama Solidarity campaign raised more cash contributions — $913,148 versus $771,595 for the Recall Sawant campaign — as of Wednesday.

Breitbart, the popular conservative news site, published a story about the recall effort earlier this year, tying the effort to residents frustrated by Sawant’s support of defunding the police and other “radical left” policies. Jason Rantz, the Seattle area conservative talk show host has had members of the recall campaign on his show several times.

Meanwhile, Noam Chomsky, a political activist known for his socialist views, endorsed Sawant, stating the recall was a testament to her progressive policies and the threat they present to “those with illegitimate power.”

After months of court action, the recall process moved forward after the Washington Supreme Court ruled on April 1 that three charges brought against Sawant were legally sufficient.

King County Elections scheduled the recall after more than 13,000 signatures from voters in the district supporting recall were verified in mid-October.

The Solidarity Campaign said it also collected signatures for Sawant’s recall in an attempt to get the issue on the Nov. 2 general election ballot.”

However, the recall committee did not submit signatures in time for it to be included in the general election.

The campaign accused the recall committee of delaying the submission of signatures to get the election scheduled at a time when fewer voters would turn out.

“We’re going to build the biggest get-out-the-vote operation the city’s ever seen,” Koulouris said. “That’s what it’s going to take to overcome voter suppression in an unprecedented holiday election.”

Bridger said the voter suppression claim was a “distraction” from Sawant’s record and her refusal to be held accountable and that Sawant herself delayed the process with numerous court appeals.

“Ultimately, we were given until Oct. 18 to submit our petitions to King County Elections and did so when we were able to verify that we had collected enough valid petitions,” Bridger said.

Ballots for the election are now out, less than a month after moderate candidates defeated their more progressive opponents in several key races, including for Seattle mayor and city attorney.

While Bridger said the recall campaign was “solely focused on restoring accountability” in Sawant’s district, he also opined that the recent election results indicated voters were seeking change and that a similar sentiment could play out in the recall election.

“The general election showed that voters in Seattle are ready for change,” Bridger said. “They want elected officials to work together, not fight and disrespect each other, but to rebuild our great city.”

Bridger dismissed the Kshama Solidarity Campaign’s assertion that the recall campaign was a right-wing attack.

“Holding an elected official accountable for breaking laws and violating their oath of office isn’t a partisan issue,” he said. “Clearly, the appetite for recalling Sawant extends further than the small handful of Republican voters who live in District 3. Suggesting otherwise serves no purpose other than to distract attention away from Sawant’s record.”

The Kshama Solidarity Campaign agrees that recalling Sawant could further lessen the progressive presence on the Seattle City Council. The campaign believes it would adversely affect residents of color and low-income residents who benefited from the policies that Sawant has advocated during her council tenure, including the $15 minimum wage.

Campaign officials believe it could affect the progressive movement elsewhere.

“Definitely, we do not want this recall to be a bellwether to embolden the right-wing to go after progressives across the country,” Koulouris said.

In 2014, Sawant and the rest of the council passed an ordinance to implement a $15 per hour minimum wage for all Seattle employees by 2021. That came after Sawant, an economist by trade, focused her first election campaign on this idea. In Seattle, the minimum wage will increase next year to $17.27 an hour — $15.75 for small employers who provide benefits.

Many believe Seattle’s move on the minimum wage influenced the rest of the state and communities throughout the U.S. to pass similar measures.

In the final weeks before the election, the Kshama Solidarity Campaign is centering its message on Sawant’s push for rent control efforts designed to benefit residents, such as a six-month notice for rent increases, Koulouris said.

Voters had turned up in strong numbers in support of Sawant before, as the 2019 election showed, Koulouris said. And he believes that Sawant’s record for supporting benefits for renters and low-income voters will get them out again for the recall election.

“We think we can drive turnout from those who have the most to lose if Kshama is recalled,” he said.