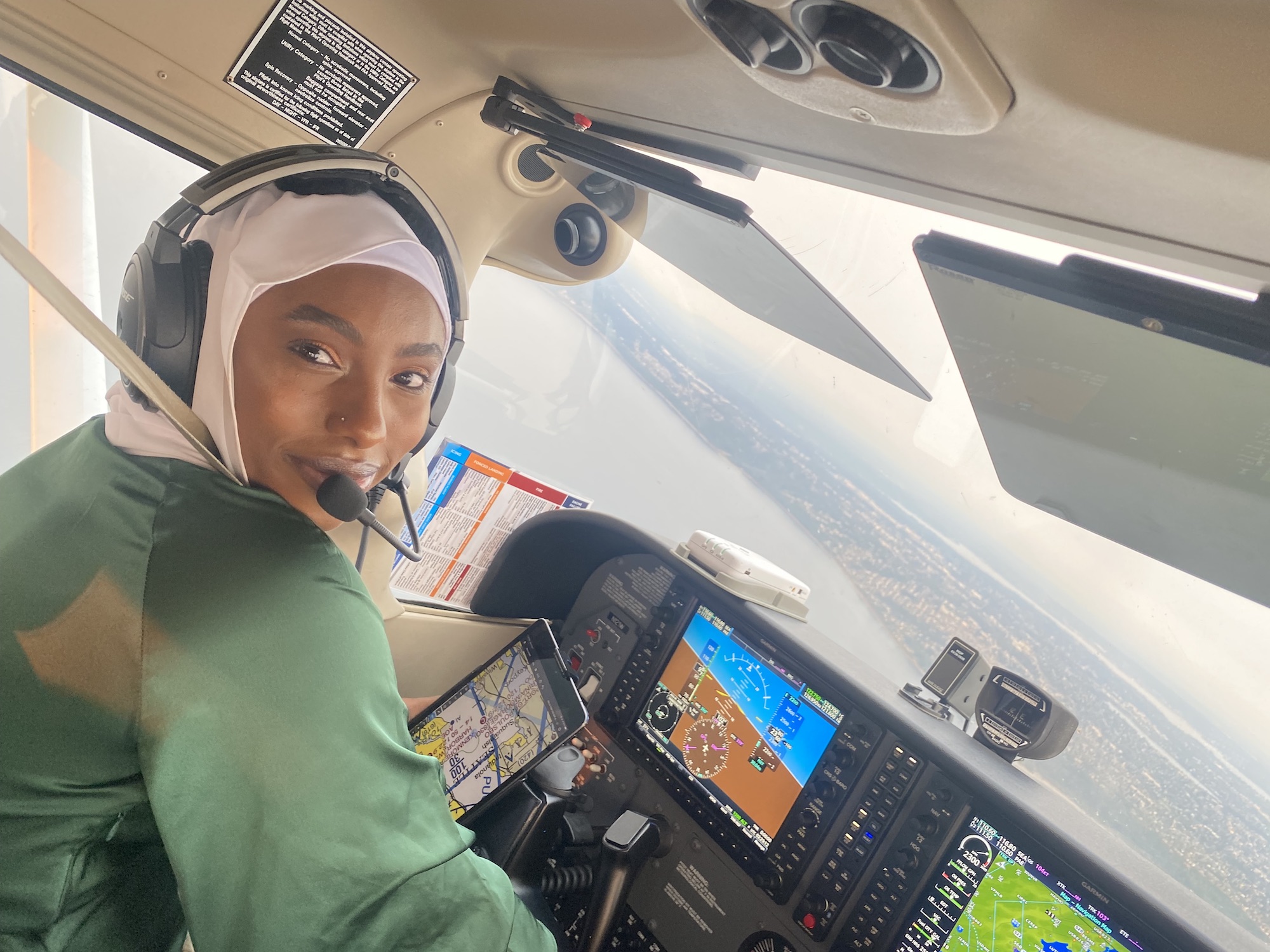 “Although I did not know the name of the occupation, I knew I wanted to be a pilot even though only rich people could do those types of careers in our country,” says Rumeisa Maresha, who came to Washington with her family in 2016. (Courtesy photo)

Zahra Karini was the last person to board her Aug. 26, 2021, flight — an overcrowded American military plane that would let her and several hundred other Afghans flee the Taliban and enter the United States.

As a woman of the Hazara ethnic group, one that continues to face discrimination in Afghanistan, Karini said she faced challenges at every turn. After growing up poor in the Ghazni province, Karini, 26, had been close to completing her degree in economics from Kabul University when the Taliban took over.

“I had dreams in Afghanistan,” says Karini (pictured above). “But those dreams are broken, and now I have to build a new dream here.”

After a months-long journey — through Germany, Washington, D.C., and New Mexico — Karini landed in Washington state, where she has lived for eight months. When she arrived, she was carrying only four sets of clothes, two books and the scars on her legs where the razor wire surrounding the Kabul airport had dug into her skin.

In May 2022, the United States granted Afghan refugees temporary protected status for 18 months — the same designation given to Ukrainians in March. This elevated status prevents refugees from being sent back to their home countries amid an ongoing crisis. As of February 2022, over 74,000 Afghan nationals had been admitted into the U.S. since Kabul fell to the Taliban.

In Washington state, lawmakers budgeted more than $19 million in 2023 for contracts with nonprofits to provide resettlement services. Between September and February, the Port of Seattle and its partners alone had welcomed over 3,000 refugees from Afghanistan.

Karini is just one of the many refugees whom these resettlement efforts have helped. When she arrived in Tacoma, Karini was connected with Refugee Women’s Alliance, a nonprofit that helps Puget Sound area immigrants with employment, housing and mental health.

“The No. 1 is housing,” says Mahnaz Eshetu, executive director of ReWA. “People want a roof over their heads. And in order to stay — to have stable housing — they need employment.”

For smaller nonprofit organizations, Eshetu says, it can be challenging to manage both fundraising and growth, but providing asylum seekers with housing and employment depends on an organization’s ability to fundraise. These days, she says she’s working with a strong job market, and there have been plenty of opportunities to connect refugees with employers.

Historically, Washington in general and Puget Sound in particular have been accepting of refugee populations, says Eshetu. The state ranked second nationwide for the number of refugees admitted in 2020. Over the past 10 years, the state has also been the most popular destination for Ukrainian refugees, according to data from the U.S. Department of State Bureau of Population, Refugees and Migration. From October 2021 to May 2022, 263 Ukrainians have resettled in Washington — a number that is expected to go up if Ukrainians are granted humanitarian parole status and allowed to enter the country without visas.

Currently, ReWA pays for Karini’s one-bedroom apartment in King County, but she works in a packaging job and funds her own English-language courses. She says she hopes to be independent soon.

While housing and employment are the keys to independence, Eshetu says that initial care for asylum seekers needs to be sensitive to their mental well-being as well. ReWA has several mental-health counselors on staff to help refugees, and they strive to provide services in languages that are accessible.

“When people leave their countries, it’s usually with the fear of execution or war — they are traumatized,” Eshetu says of the refugees.

Karini says she didn’t leave her room for many days after arriving in Washington. In addition to the frustrations of leaving her old life behind, she says she was deeply worried for her family, who are still living in Afghanistan under the Taliban.

But she says it was her desire to help her family that convinced Karini to take a more active role in her life. Today, she provides money for her family back home, and she is hopeful that they will be able to join her in the U.S. someday.

“I thought, ‘If I just sit alone in my house like this, what will happen to my family?’” Karini says. “I can’t help them like this. This is enough — I have to start and go forward.”

Today, Karini works with the Hazara Community of Washington, a nonprofit working with Afghan refugees. She volunteers her time to help other women like herself work through personal struggles with mental health and sometimes domestic abuse.

When it comes to new immigrants from Afghanistan and Ukraine, Eshetu says resettlement agencies have been fortunate that many are highly educated. Eshetu says Afghan refugees including Karini have had experiences working with American troops and have thus been quicker at adapting to life in the U.S.

But this most recent wave of refugees to the Puget Sound region is exceptional in that regard — many other refugees have to tackle the language barrier head on. 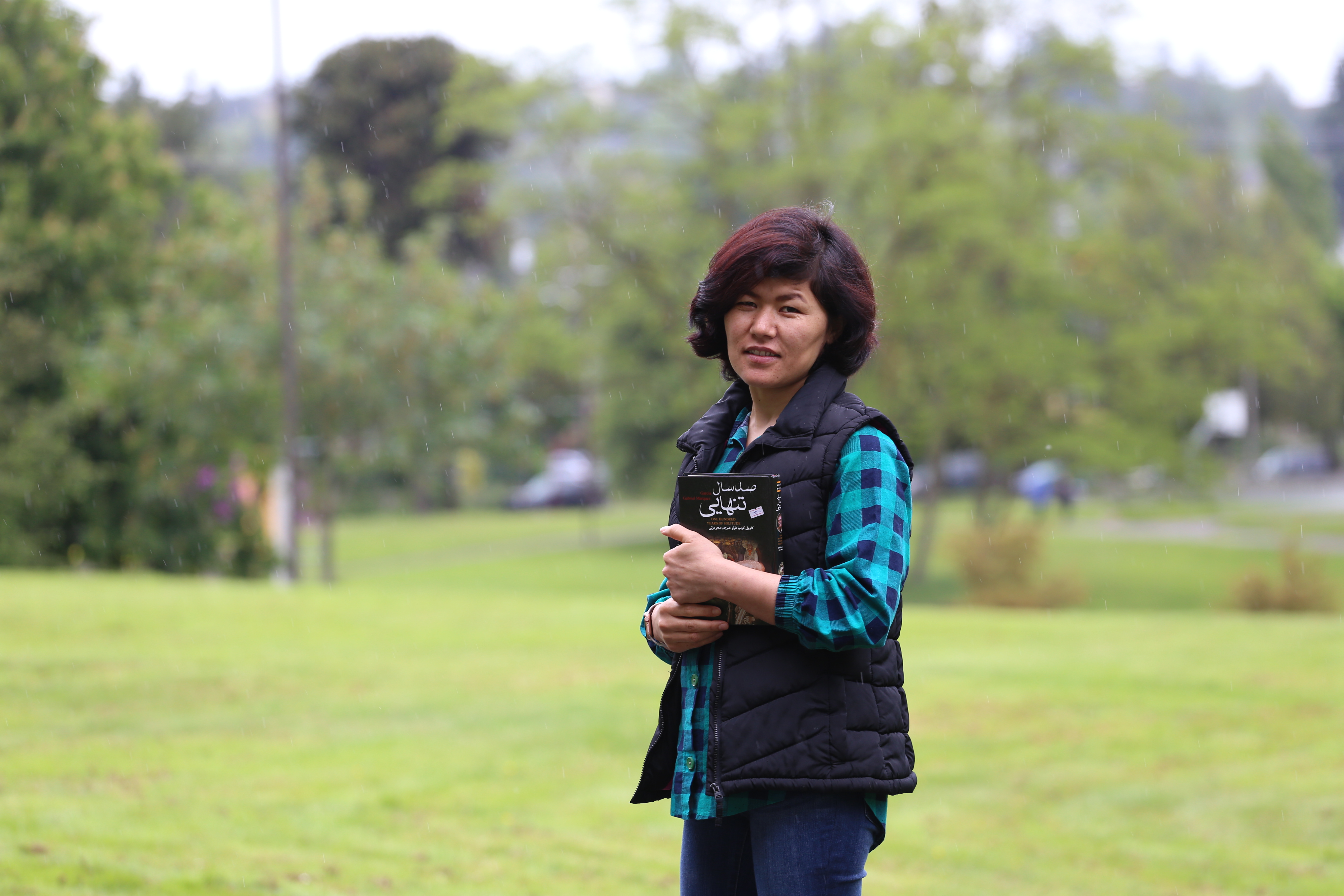 When Zahra Karini, 26, escaped from Afghanistan and arrived in Washington state, she says she didn’t leave her room for days. (Indunil Usgoda Arachchi/InvestigateWest)

When Zahra Karini, 26, escaped from Afghanistan and arrived in Washington state, she says she didn’t leave her room for days. (Indunil Usgoda Arachchi/InvestigateWest)

Twenty-one-year-old Rumeisa Maresha, originally from Eritrea in northeast Africa, says she didn’t know any English when she came to Washington with her family in 2016. Even though she had already been living in a refugee camp in Ethiopia, this second transition was much harder because of the language barrier.

“Adapting to Seattle was not as easy as adapting to Ethiopia from Eritrea. It was a new lifestyle and a new language,” Maresha says.

Throughout high school in Tacoma, Maresha took English-language classes after hours to bridge the gap between her and other students.

Now attending Green River College in South Seattle, Maresha only vaguely remembers the long journey that she and her family made while fleeing the war in Eritrea. She was 10 at the time. Moving by foot, buses and donkey carts, Maresha says she, her two siblings, and her parents traveled to Ethiopia from Eritrea.

“We were moving with only our documents and a couple of clothes,” Maresha said.

For five years, Maresha and her family lived in a camp in Ethiopia, surrounded by thousands of other Eritrean refugees. Like many of their neighbors in the Shimelba camp, Maresha’s family built their own house, but they were always hoping to resettle in the United States.

Though Maresha went to school and made friends in Ethiopia, she said her parents thought they could give their children a better education in America.

Now, Maresha is the first person in her family to attend college. She hopes to graduate with a major in aeronautical science and become a pilot flying international flights — a dream that she’s carried with her all the way from Eritrea. 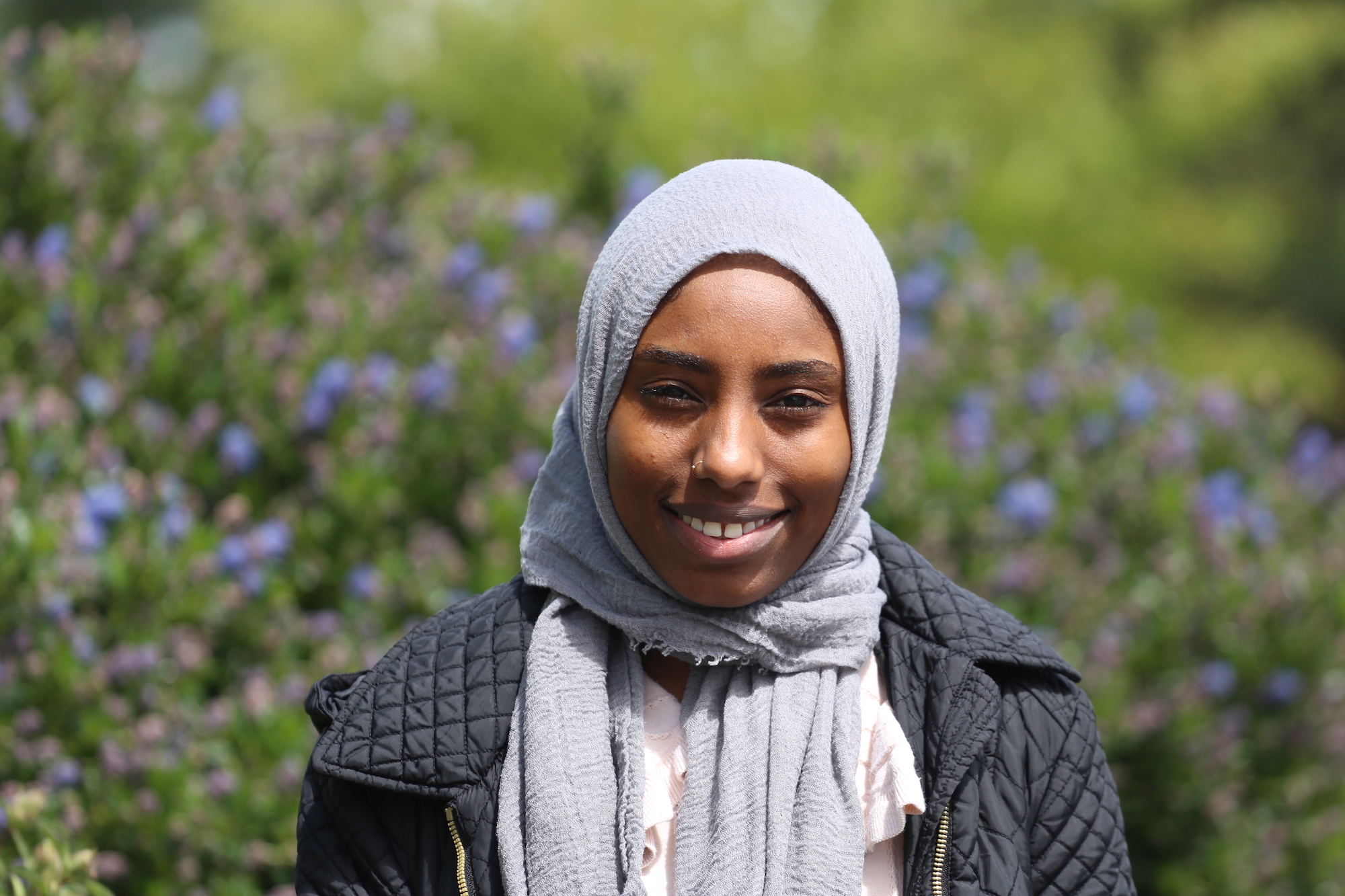 Many years ago, Maresha said she would occasionally see an airplane fly high above their refugee camp in Ethiopia — back then, she still didn’t know what the people who flew them were called. Even in high school in Tacoma, she remembers referring to pilots as “plane drivers.”

“Although I did not know the name of the occupation, I knew I wanted to be a pilot even though only rich people could do those types of careers in our country,” she said.

Maresha said she’s been able to take advantage of resources she’s had access to only in America. On a junior-year field trip to Sea-Tac International Airport, Maresha met a representative from the Museum of Flight, and was introduced to a college program called Aeronautical Science Pathways.

She started her flight training in 2020 — and received her first private pilot’s license in June 2021. The very next day, Maresha took her dad on a flight around the Seattle sky.

“It was amazing,” Maresha said about her first flight as a licensed pilot. “My parents were very proud of me.”

This story was first produced for InvestigateWest on June 22, 2022. 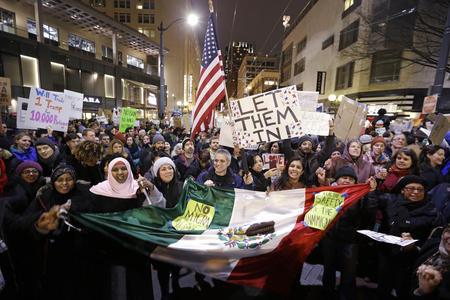 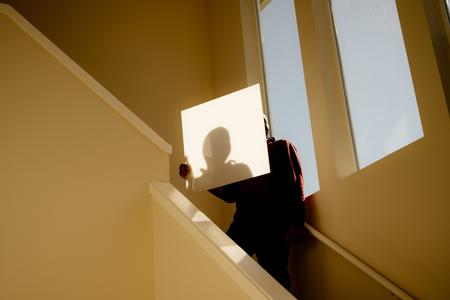 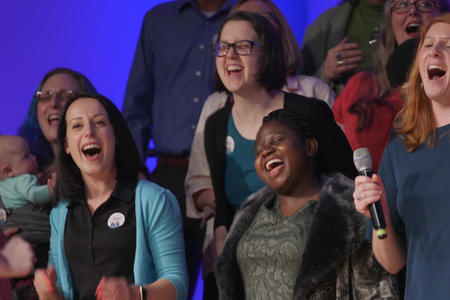 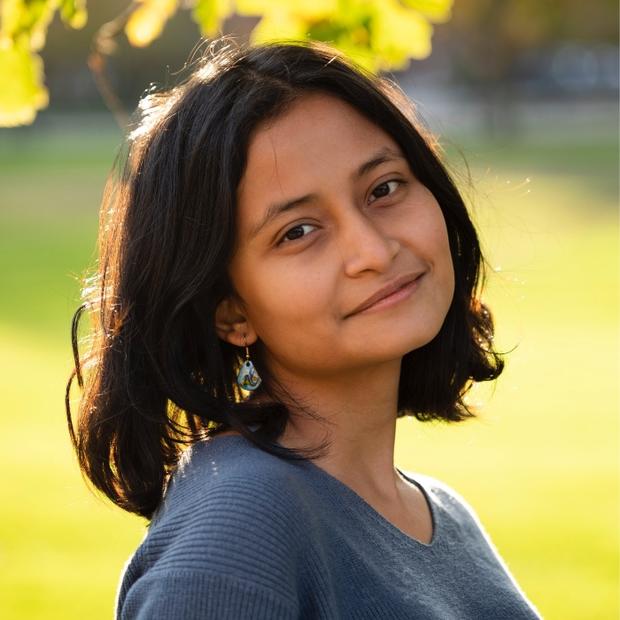 Indunil Usgoda Arachchi is an InvestigateWest's reporting intern and an Alfred Friendly fellow in 2022. She is a journalist in Sri Lanka and has worked for six years as a newspaper reporter and freelancer, including stories and photography for the Ravaya newspaper, the Sunday Observer, and Reuters. The OCCRP in late 2021 hired her as an editor for South Asia projects.