Washington's efforts to rebrand as a tourist destination

Armed with a $9 million budget, the state is eager to respond to pent-up travel demand nationwide. 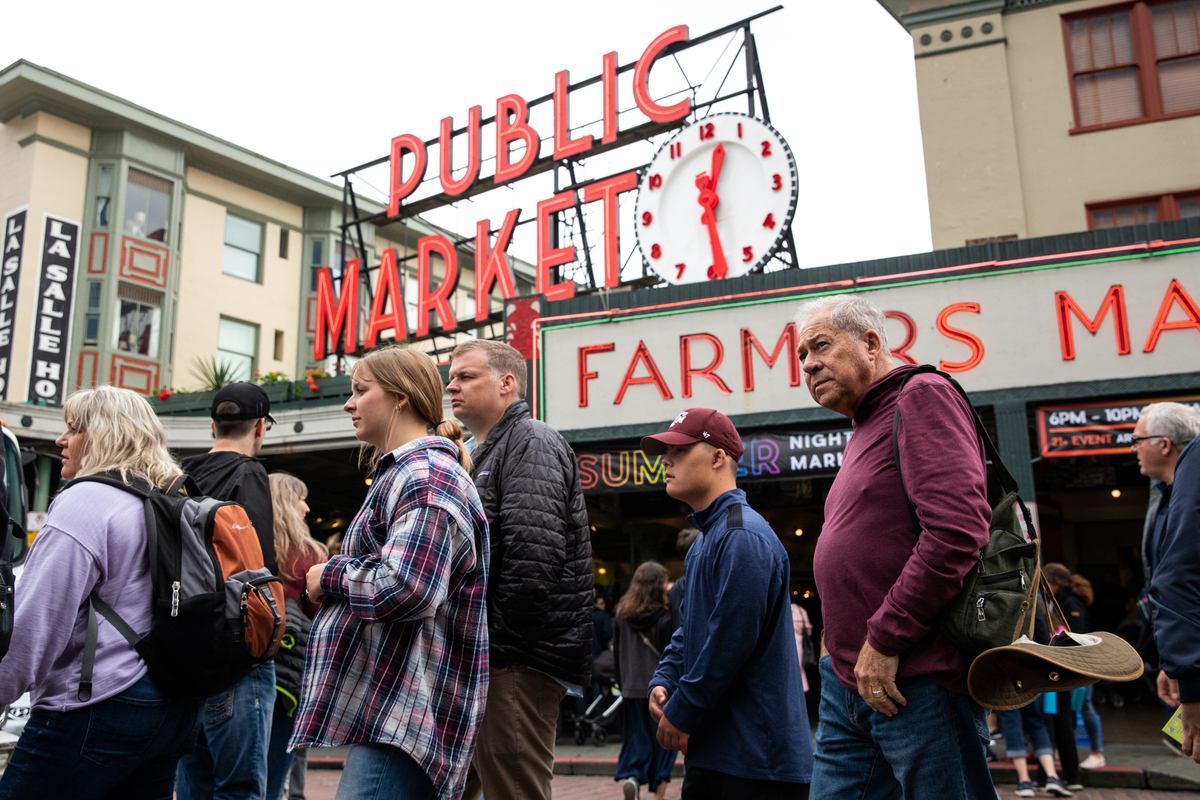 While Albert Nuñez was in a Dallas-area hospital fighting COVID-19 in late 2020, his family helped him remain positive by bringing photos from hikes and other outings in Seattle and around Washington state.

Nuñez had moved back to his native Dallas in 2018 after 15 years living in Seattle.

This story is part of a Crosscut focus on Tourism: Open for Visitors

It would take six months — including a month at the hospital — for Nuñez to fully recover from COVID-19. During that time he decided that when he could, he would hike around Washington again. “Just to see the nature again,” he said. “It’s what I miss the most.”

With travel restricted during the pandemic, tourism in Washington, as in the rest of the U.S., took a significant hit and led the state’s economy and tax coffers to lose billions.

But the pandemic also gave many, like Nuñez, a renewed appreciation for the value of travel.

This pent-up demand provides a prime opportunity for Washington’s tourism industry. And unlike a decade ago, this year the state has a multimillion-dollar statewide tourism budget.

Tourism officials hope to lure back return visitors like Nuñez, as well as those who had never considered visiting the state in the first place.

When the state’s tourism office closed and tourism promotion dollars dried up more than a decade ago, the state had a much harder time getting into the consciousness of prospective tourists in the U.S. and abroad.

While people continued to visit Washington – including millions leaving Seattle on cruises to Alaska – the lack of a concerted promotion effort heavily limited its reach to new visitors, said Jha. He is also a board member for State of Washington Tourism, a nonprofit contracted to lead the state’s destination marketing and management efforts.

“People do not visit places they do not know about,” he said. “The other piece is they don’t come unless they’re invited.” 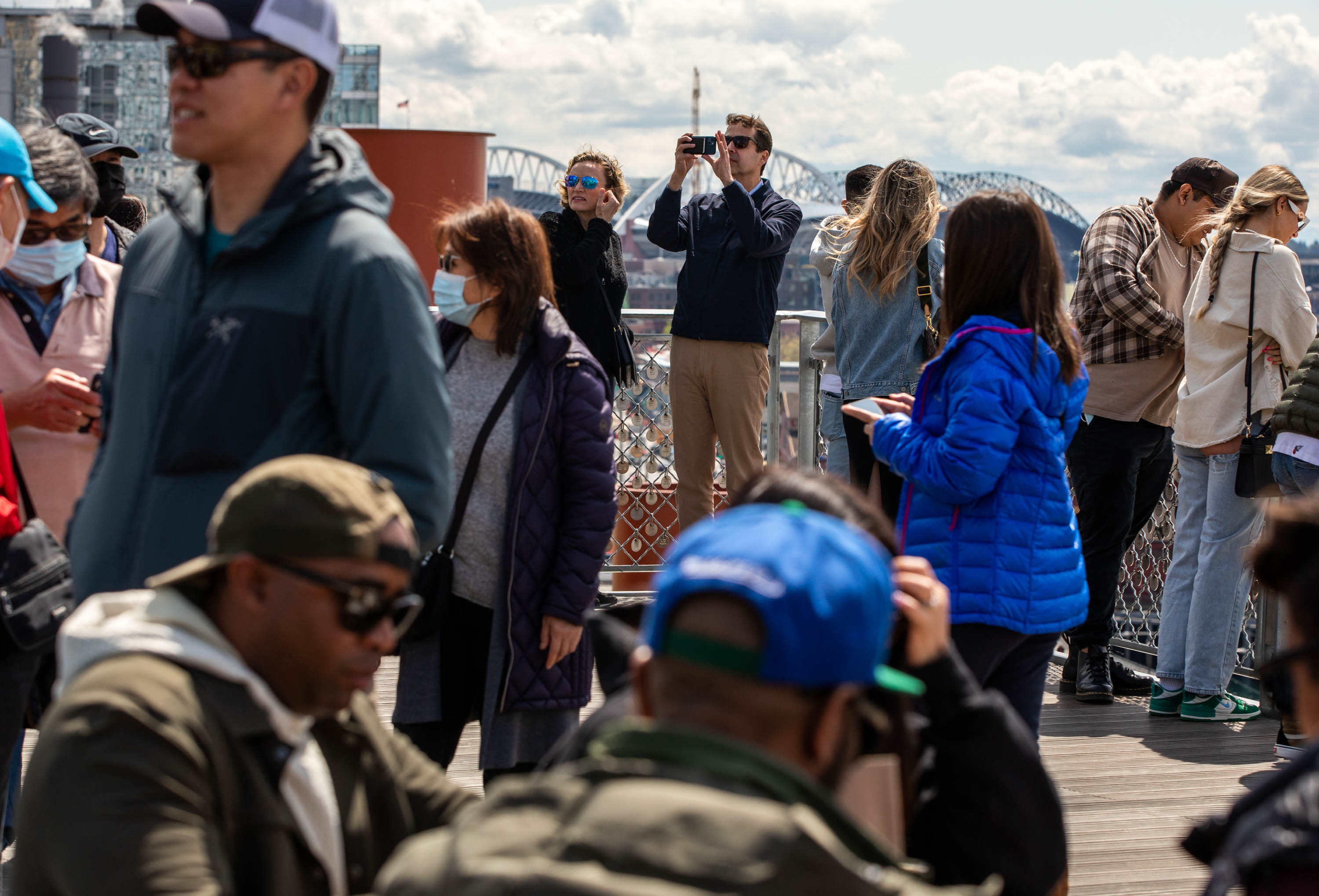 Visitors take in views of the waterfront and mountains on The Marketfront Pavilion at Pike Place Market on Friday, April 29, 2022. (Amanda Snyder/ Crosscut)

Visitors take in views of the waterfront and mountains on The Marketfront Pavilion at Pike Place Market on Friday, April 29, 2022. (Amanda Snyder/ Crosscut)

When Washington closed its tourism office in 2011, tourism industry officials could quickly point to a case study of the consequences of such a decision. In 2006, Longwoods International, a travel consulting firm with locations in the U.S. and Canada, looked into the impact of Colorado’s decision in 1993 to eliminate its travel budget, which was $12 million at the time.

Colorado’s funding was restored in 2000, and legislation a few years later brought the budget back up to $19 million, but the Longwoods study emphasized the state would feel the harmful effects for years to come. The study ends with “Think Twice Before Slashing Your Marketing Budget. Don’t Be The Next Colorado.”

But five years after the study launched, Washington was the only state without a state tourism office or promotional program. The closure was the latest — and most significant — blow as the tourism budget had dwindled from just over $7 million in 2008 to just $1.8 million in 2011. And that funding was ultimately cut, prompting the office closure, to cover the state’s budget shortfall at the time.

Industry officials hastily got together a nonprofit called the Washington Tourism Alliance — now State of Washington Tourism. The organization managed to use limited public dollars and donations to continue basic tasks, such as maintaining a website and publishing a visitors guide.

But the state had no money for outreach to prospective visitors, as other states spent millions — even tens of millions —  to communicate to travelers through multiple marketing campaigns, said David Blandford, executive director of State of Washington Tourism. 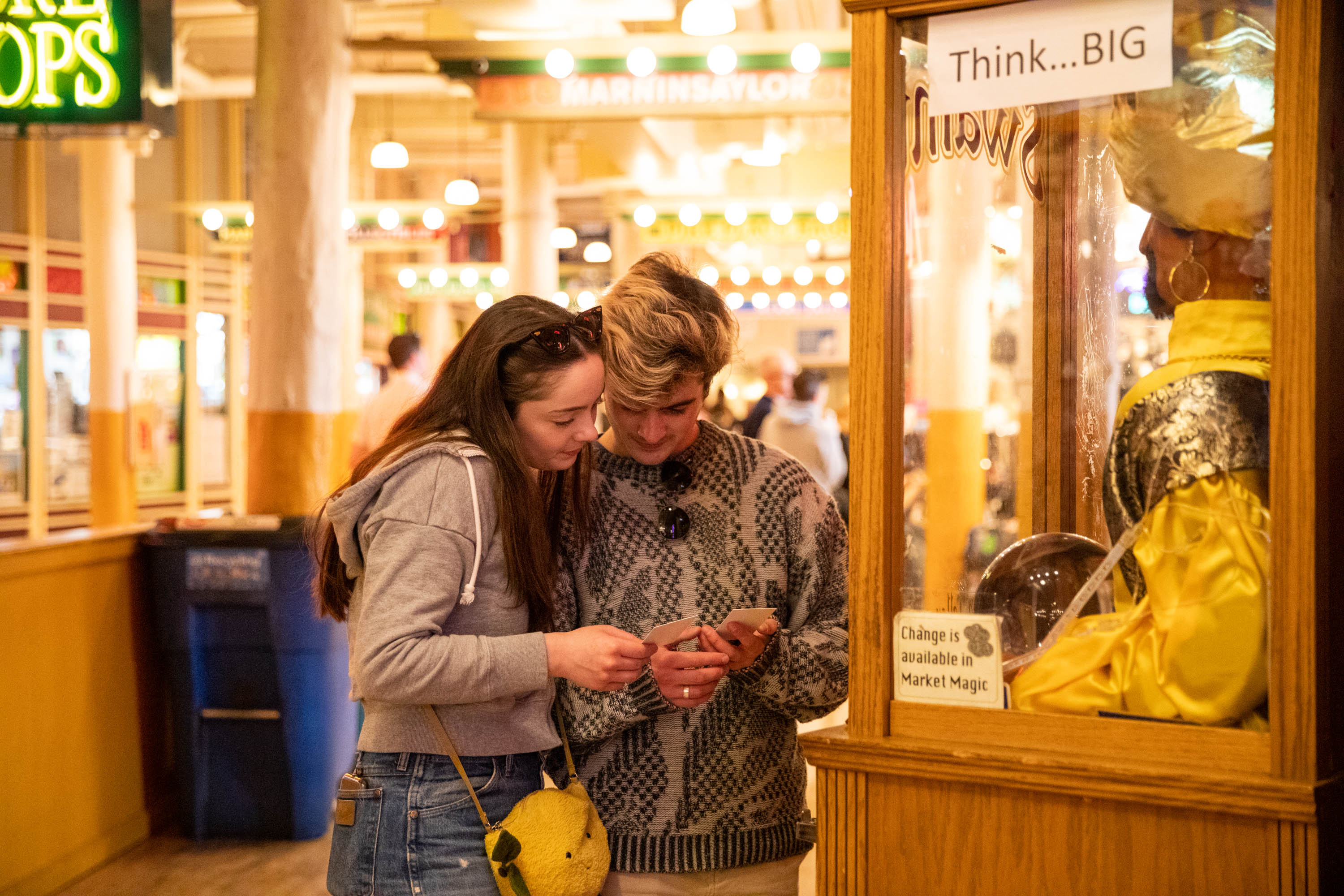 Its biggest competition was just next door: Oregon offered many of the same features as Washington — an urban center in Portland, ocean coastland, mountains and wineries — and had been spending tens of millions of dollars annually on its tourism development and promotion program.

The Washington Tourism Alliance and others in the tourism industry documented lost opportunities to attract visitors — and their impact on the economy and tax revenues for state legislators for several years.

Finally in 2018 the state passed legislation outlining a mechanism to generate state tourism promotion and management dollars by earmarking a portion of state sales tax dollars and matching them with dollars from the tourism sector.

According to figures from Tourism Economics, visitor spending in the state was $13 billion in 2020, a 41 percent drop from just a year earlier. Spending increased in 2021 to $17.7 billion but remained below pre-pandemic levels.

“When the world stood still, we [saw] the impact of not having anyone in your city, not having anyone in your store, your restaurant,” said Nan Marchand Beauvois, senior vice president of membership and industry relations for the U.S. Travel Association. “I think most of our major tourist destinations across the U.S. understand what a month without visitors feels like and the negative impacts of that.”

Of 40 states that reported tourism promotion and management budgets to the U.S. Travel Association, 29, including Washington, reported an increase from the 2020-2021 to the 2021-2022 fiscal year. An additional eight states maintained their tourism budgets, and just three states reported a decrease.

For 2022, State of Washington Tourism has roughly $9 million to spend on destination promotion and management. Just $3 million of that came from the new budget mechanism, with the remainder from a biennium budget proviso passed last year to help the tourism industry recover from the pandemic.

Washington is still catching up with neighboring states with much higher budgets. According to rough estimates provided by Blandford, the next lowest state is Idaho, with $13 million. Oregon and California’s budgets are several times higher at $40 million and $120 million, respectively.

Still, this year’s budget is a considerable improvement over having to scrape for dollars, which the Washington Tourism Alliance had to do for several years.

With the one-time budget proviso to expire next year, Blandford said it will be crucial to evolve the public/private funding model to sustain additional funding.

“We’re building back. We’re in recovery,” Blandford said. “We have to get to a place where we can sustain programs year in and year out.” 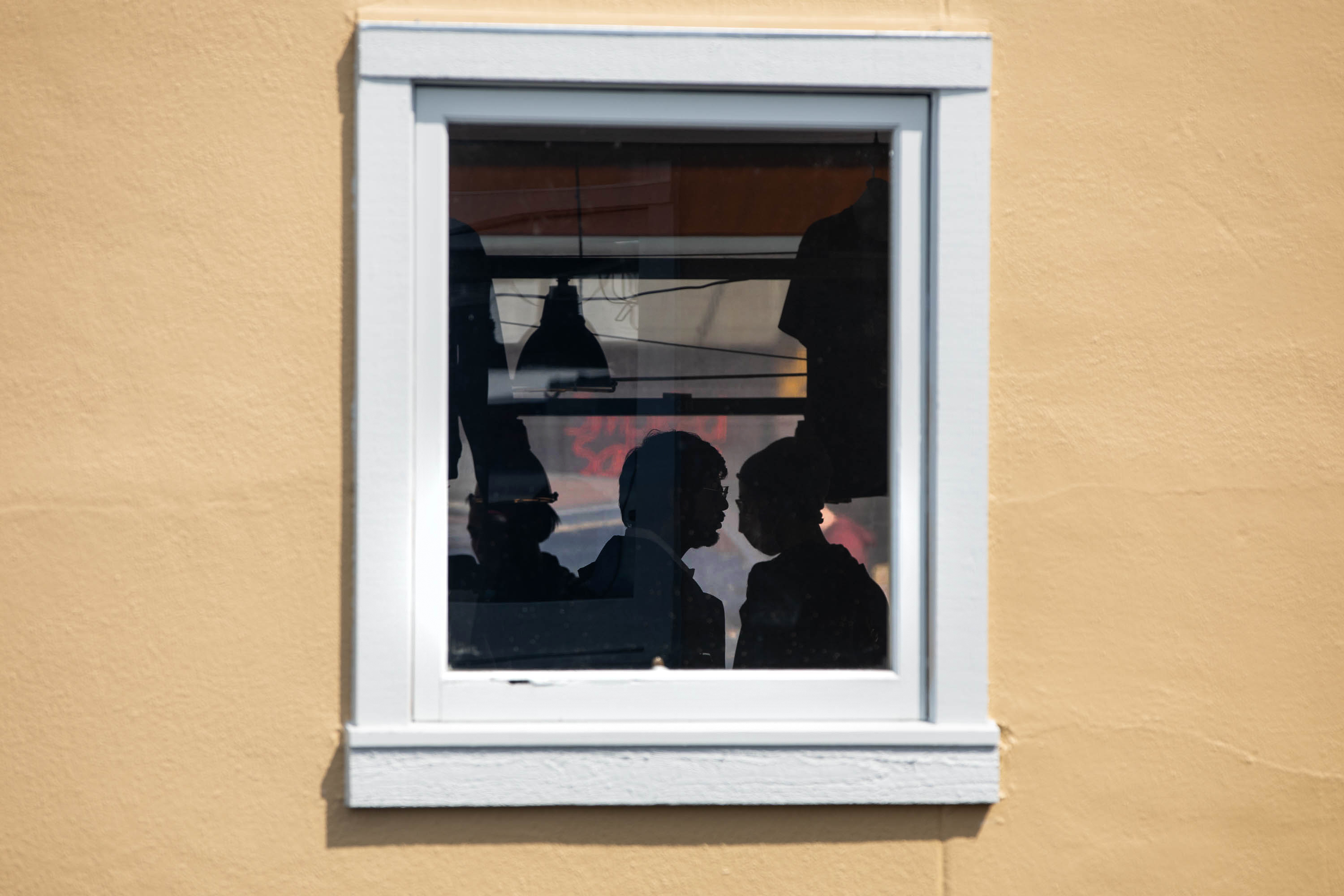 The Washington Tourism Alliance was several months into building back that program when the pandemic hit. Much of its planned tourism promotion and management strategy had to be put on hold. Still, the organization moved forward on projects that could continue during the pandemic, such as website redesign and assisting tourism-related businesses through various challenges, such as prolonged closures and health and safety policies.

The organization also launched True to Nature, the state’s first major marketing campaign in more than a decade. The $1.7 million campaign, aimed at visitors from different markets in the Western U.S. and Canada, is aimed at a specific group of visitors called “Pathfinders,” described as travel lovers who are active, interested in learning new things and eager for both urban and rural experiences.

To draw these visitors, it used photos of people enjoying an array of experiences: enjoying local foods in the city, touring an estate vineyard or hiking in the forest.

A Washington map posted on the State of Washington website, for example, isn’t showing cities and highways but notes activities located in different parts of the state, such as “Trails and Lakes,” “Volcanoes,” and “Wine Country.”

The brand aims to encourage visitors to dive into various experiences that the organization describes as “authentic” and “transformative.”

“We want you to come in and immerse,” Blandford said. G'Meciah Davis-Henderson puts a piece of gum on the gum wall below Pike Place Market on Friday, June 17, 2022. Davis-Henderson, who is visiting from Dallas, used the gum to attach her business card for her self-case business. (Amanda Snyder/ Crosscut)

G'Meciah Davis-Henderson puts a piece of gum on the gum wall below Pike Place Market on Friday, June 17, 2022. Davis-Henderson, who is visiting from Dallas, used the gum to attach her business card for her self-case business. (Amanda Snyder/ Crosscut)

Getting people to visit

Back in Dallas, Nuñez, the former Seattle resident, is eager to immerse himself in all his former residence has to offer.

In August, Nuñez will spend 10 days on a busy itinerary that includes hikes in several national parks, watching the Seafair airshow rehearsal while on a boat in Lake Washington and eating at sushi restaurants around Seattle.

The trip will be “a homecoming and recovery for me,” Nuñez said.

During his visit, Nuñez will stay in Seattle’s Lower Queen Anne neighborhood with a friend who moved to Seattle after visiting Nuñez when he lived here.

Nuñez had many friends and family visit him in the years he lived in Seattle, many of them in awe of the vast array of outdoor recreation options. And they’re also surprised to learn there are parts of the year when Seattle isn’t under a blanket of rain.

Now back in Dallas, Nuñez encourages colleagues, friends and family to visit Washington. He finds that many of them don’t know much about the state. He says that when his fellow Texans travel for outdoor recreation, it usually isn’t to Washington.

Nuñez said he sees other places promoting themselves. During a recent drive around Dallas, he came across a billboard inviting visitors to Alberta. He’s eager for Washington to have a billboard, especially one for all the national parks, like Mount Rainier, Olympic, or his favorite, North Cascades.

He thinks his experience in those parks can match or exceed anything his friends and family experience in Colorado. “The national parks alone — [if you’re counting] Mount St. Helens, it’s four parks — that alone is a big selling point for people to visit,” he said. 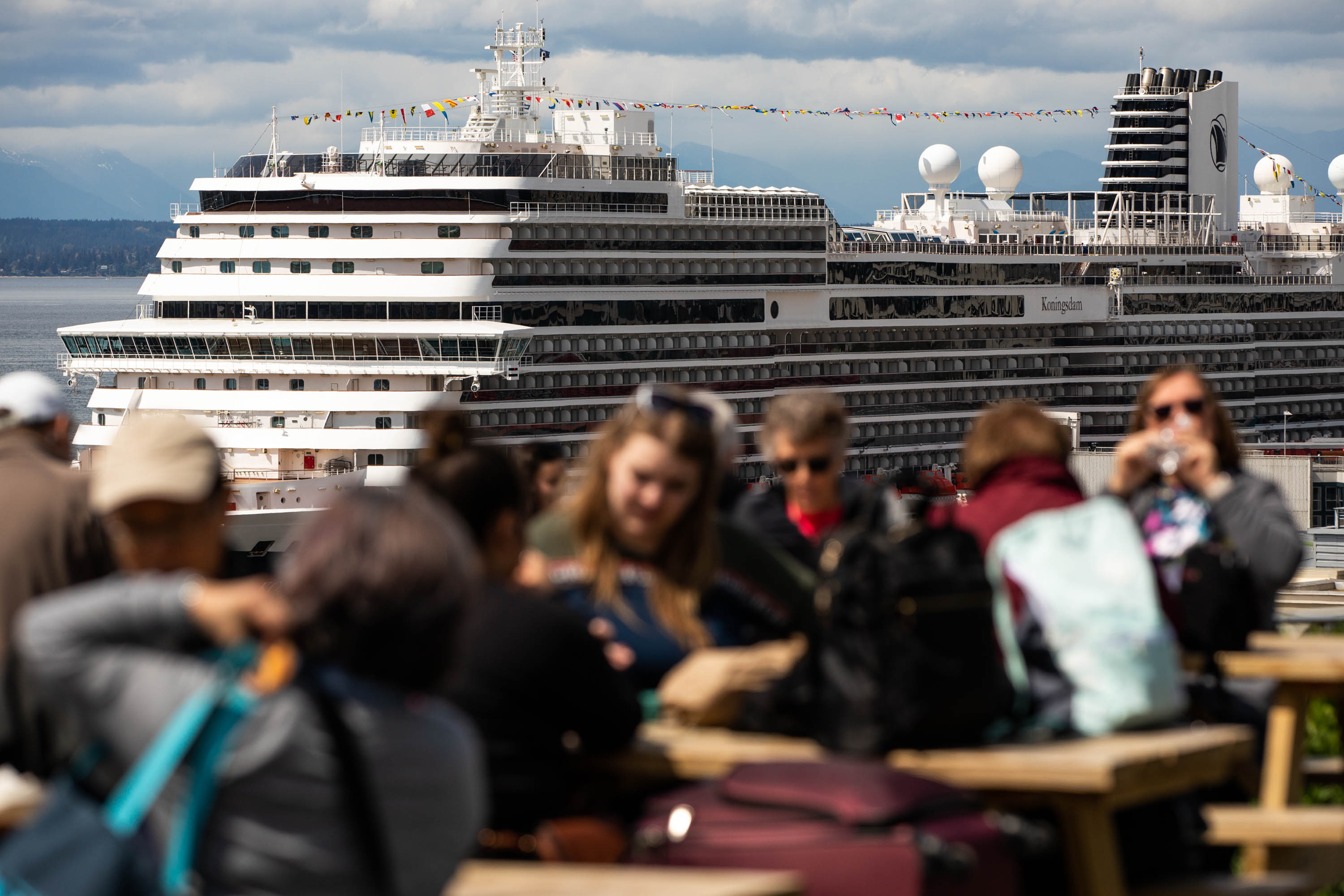 For decades, the Arlington radio station has helped the U.S. military communicate with its submarine fleet. It's also one of Russia's top nuclear targets.

Mai Hoang is the Central/Eastern Washington reporter for Crosscut, where she seeks to provide a broader perspective on what is happening east of the Cascades and the region's relationship with the rest of the state. Find her on Twitter @maiphoang or on Facebook, or you can e-mail her at mai.hoang@crosscut.com.