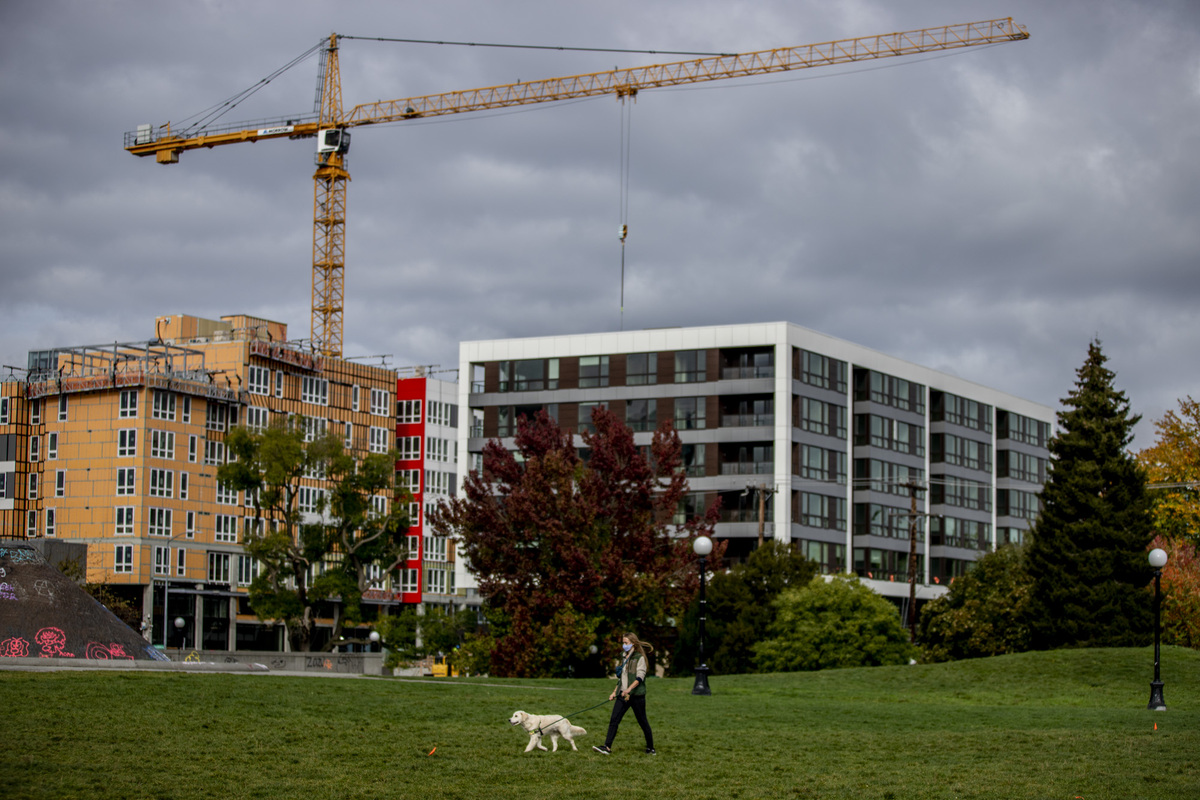 Buildings under construction and cranes are seen from Cal Anderson Park on Oct. 21, 2020. (Dorothy Edwards/Crosscut)

City officials project Seattle’s population will hit 1 million people by 2044. That’s an additional 240,000 or so residents over the next 22 years.

Where will they live? What kind of homes will we build for them? How do we ensure new growth doesn’t exacerbate existing racial and economic inequities?

These are all questions guiding the update of Seattle’s comprehensive plan, which establishes parameters for how the city wants to grow over the next 20-plus years.

Seattle’s Office of Planning and Community Development is in the early stages of the two-year update process, establishing the guide rails of what the plan might look like: Will we build tall apartment buildings with ground floor businesses in all corners of the city? Will we change nothing and hope for the best? Will it be something in between?

As part of this early scoping process, city officials want to know what you think Seattle should do to prepare for the next quarter-million residents heading our way.

What the plan does (and doesn’t do)

Michael Hubner, the city’s comprehensive plan update project manager, likened the plan to drawing a road map that shows city officials and staff where we’ve decided to go on a 20-year road trip. The policymaking and budgeting that ultimately shape what the city looks like are the driving, sightseeing and snack buying along the way.

The comprehensive plan doesn’t set the city budget, but it establishes priorities that city officials are supposed to follow when budgeting. It doesn’t upzone neighborhoods to allow for apartment buildings or new businesses, but it shows city council members where they’re supposed to approve upzones. It’s not a transportation plan that says where new sidewalks and bike lanes will go, but the city’s transportation plan must align with the comprehensive plan.

“From a planner’s perspective this is a fascinating and daunting time to be doing a comp plan,” said Hubner. “We’ve got everything from an unrelenting housing affordability crisis and homelessness crisis, to the climate crisis.” 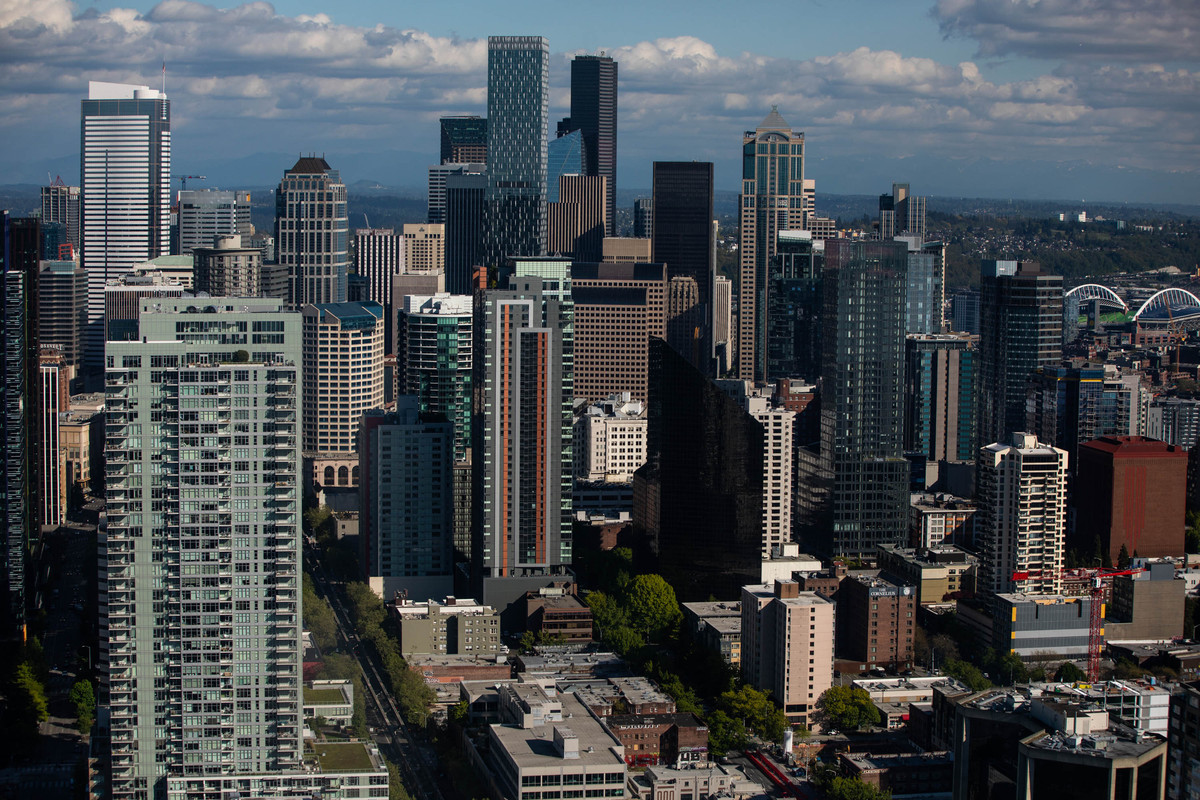 Downtown Seattle seen from the Space Needle on Friday, May 20, 2022. (Amanda Snyder/ Crosscut)

Downtown Seattle seen from the Space Needle on Friday, May 20, 2022. (Amanda Snyder/ Crosscut)

Hubner also said that while racial equity was an important part of the last comprehensive plan update in 2016, today the planning department is “more cognizant of the history of systemic racism in public policy and private practices such as real estate.”

The 1990 state Growth Management Act requires all cities in Washington with more than 50,000 residents to have comprehensive plans and to update them every decade.

Seattle’s first comprehensive plan, adopted in 1994, established the city’s urban villages strategy. It concentrated density and new growth to neighborhood hubs along transit corridors, leaving about 75% of the city's residential areas for single-family houses. The city has largely adhered to that plan with 83% of new homes being built within the boundaries of an urban village since it was adopted.

Hubner said that’s been for better and worse. Seattle has gotten much-needed apartments, though most are studios or one-bedrooms not suited for families. The strategy also doesn’t produce many new opportunities for homeownership, since in single family zones you mostly get a one-to-one replacement of old houses with new houses.

The urban village strategy, Hubner said, has not done enough to address “the legacy of exclusionary zoning in the city” which limited where Black residents and other residents of color could live and shut them out of the wealth building opportunities of homeownership in many cases.

The Office of Planning and Community Development has five broad concepts on the table ranging from staying the current course to opening up most of Seattle to denser housing. The city will draw on its own analysis, input from elected officials and feedback from the public to eventually coalesce around one concept for a finalized plan.

Who gets a say?

Anyone can weigh in on the comprehensive plan update and the city is actively courting input from the public. The Office of Planning and Community Development recently extended the deadline for the first phase of public comment to Aug. 22 in order to give people more time to share their thoughts. The city has an online portal where people can make profiles and leave comments about different parts of the proposal. You can also send emails to OneSeattleCompPlan@seattle.gov and attend public meetings about the plan update.

Some groups are deeply invested in the comprehensive plan.

Pro-growth urbanist groups including housing and transportation advocates and environmentalists want to see Seattle’s leaders pursue the broadest options that will produce the most housing in the most places. 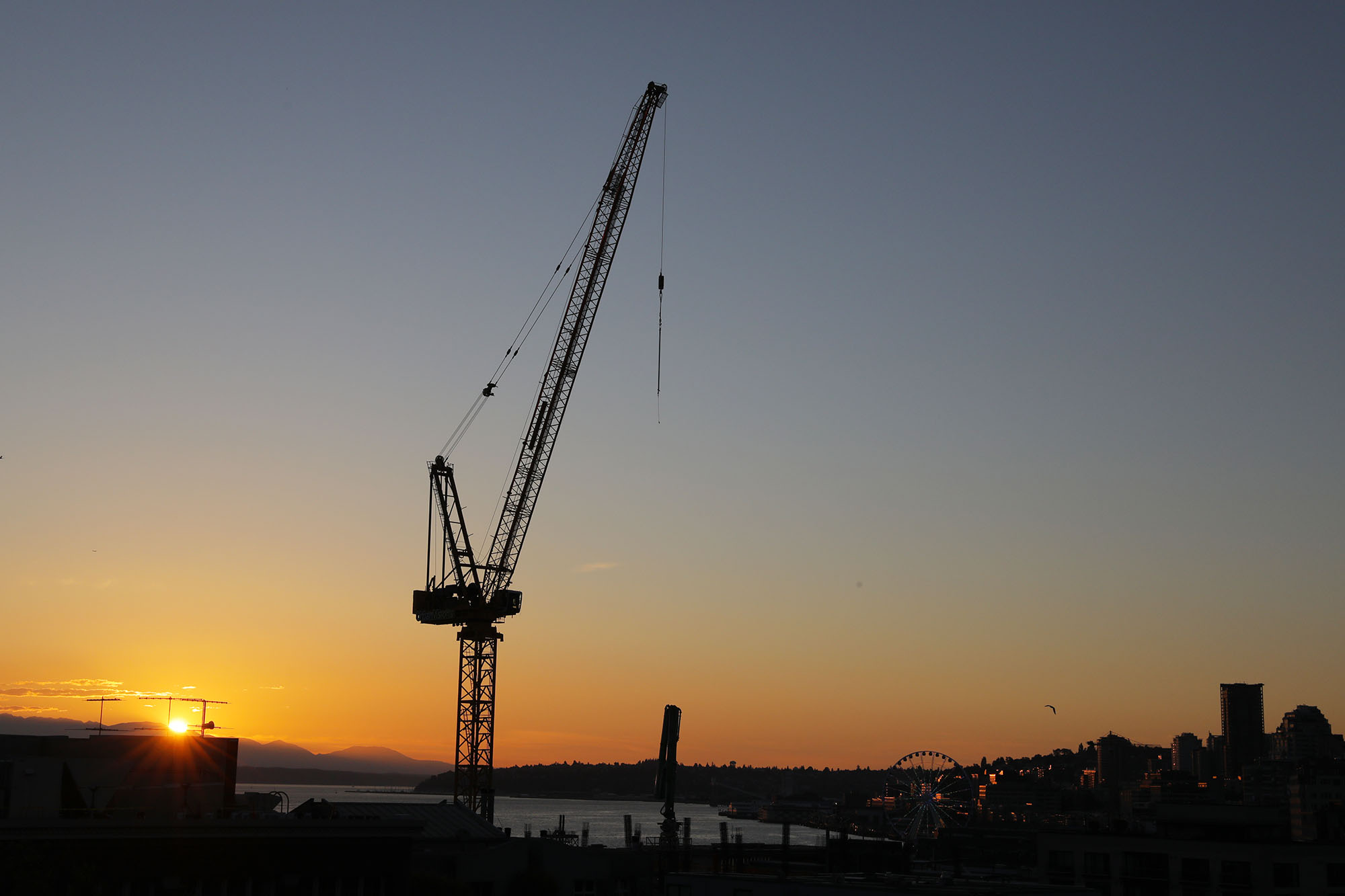 A crane rises above the Seattle waterfront at sunset Thursday, July 21, 2022. (Genna Martin/Crosscut)

A crane rises above the Seattle waterfront at sunset Thursday, July 21, 2022. (Genna Martin/Crosscut)

Laura Loe, executive director of the nonprofit Share the Cities, doesn’t think the Combined Plan should necessarily be the ceiling, and that the city can and should be thinking even bigger about where to allow more housing.

“If we’re pushing for cross-class social housing as a north star of what future we want to see in terms of how we live together and grow, right now there’s a scarcity of land on which to build multifamily housing,” said Loe. “My priority is to make it less scarce so we have more options. The future of Seattle is not a 5,000-square-foot lot for one heteronormative American dream family. We have to have a different American dream under the climate crisis, under the housing crisis.”

Loe is realistic about the limits of the comprehensive plan alone to transform the city, however, since it’s still up to the city council to enact policies to turn vision into reality. “What really matters is who gets elected next fall,” she said.

Neighborhood community councils are also very invested in the comprehensive plan. Historically, the neighborhood groups have been wary of growth and have organized against and even sued the city over efforts to increase density in single family zones.

Denny Bird of the Queen Anne Community Council said the vast majority of his fellow councilmembers agree that something needs to change. “We agree we need density. We’re on board with it,” he said. “What we're not on board with is ruining all the single family housing at the same time.”

The city has also made an active effort to get more people to participate in the comprehensive plan update than traditionally do. The Office of Planning and Community Development contracted with five community-based organizations that work in and have relationships with lower-income communities of color.

Councilmember Tammy Morales, whose district includes Chinatown-International District, Beacon Hill and the Rainier Valley, has also hosted a series of events called Seattle Within Reach to educate people on all the components of the comprehensive plan.

“I want folks to be engaged in the process,” said Morales. “I want them to understand this is where we put housing, how we support small businesses in cities instead of having their landlords kicking them out, how we create more reliable, more frequent transit services so people can get around, visit friends, go to the doctor, or even go to work.”

She continued, “It’s important you understand that it will impact everything, but also that you should be at the table having those conversations so that you’re making the decision about how your neighborhood changes and grows.”

How long until Seattle updates the plan?

Next spring, the city will present a draft of the plan to collect more input from the public and elected officials, before going back to make changes and do a final analysis.

In spring 2024, city officials will present the final plan for the mayor and city council’s consideration before it is finally adopted that fall.

Update: This article has been updated to clarify that 75% of the city's residential areas were zoned for single family housing, not 75% of the total city.