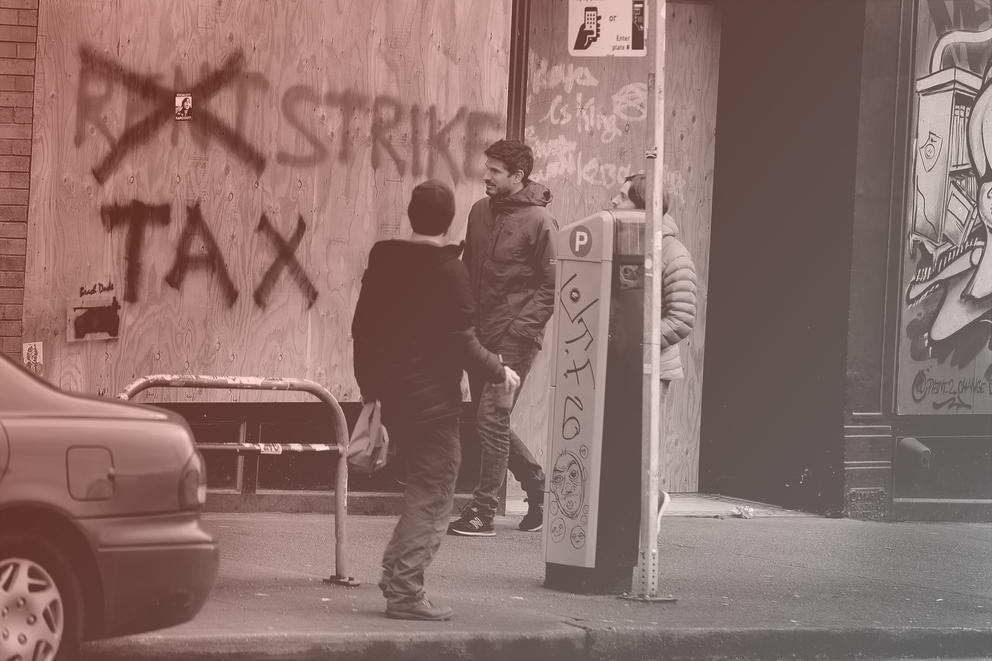 Pedestrians walk past graffiti advocating rent and tax strikes, in Seattle's Capitol Hill neighborhood. With millions of people suddenly out of work and rent due at the first of the month, some tenants in the U.S. are vowing to go on a rent strike until the new coronavirus pandemic subsides. (Ted S. Warren/AP)

What happens when eviction moratoriums expire?

Last week, I explored the problem of rent nonpayment and why it’s likely to get worse. Emergency measures from national, state and local governments are doing a fairly good job keeping people in their homes so far. But they only kick the rental debt can down the road. If nothing is done, eventually there will be evictions — lots of them. The pain will be widespread, but it will not be spread evenly. Rather, it will concentrate in those communities already most plagued by eviction in prepandemic days. Around here, that means Black and brown people in South King County.

Tim Thomas, research director of the Urban Displacement Project at University of California Berkeley, has studied eviction patterns in King County. He and his colleagues found that the variables predicting high eviction rates are racial diversity, specifically how Black or Latinx a neighborhood is, and how cheap the rent is. “The last few places that are affordable in the Puget Sound region have the highest risk of eviction,” he says. Black households were four times more likely to be evicted than white households, a ratio that rose to seven times for Black women as compared with white women. A 2018 report by the Seattle Women’s Commission and the Housing Justice Project found similar racial disparities in Seattle evictions, often of tenants who owed far less than a single month’s rent.

This is the second in a two-part series on evictions. Read the first part here.

Now we’re talking about many thousands of people, many owing multiple months of rent. If landlords and tenants are left to duke it out through the normal legal channels, both will lose. Not only will tenants lose their homes, they’ll face all the debilitating consequences of being in debt, including the challenge of finding a new landlord willing to rent to them. Many will be left homeless, sleeping in shelters or unsheltered, with all the personal and public health impacts and public costs that entails. Landlords, for their part, will incur legal and other costs of the eviction process, and are unlikely to ever recover much unpaid rent. The pandemic is already creating serious cash flow problems for some landlords, especially smaller ones. In a national survey of 2,225 individual landlords in August, 35% reported pulling from savings or emergency funds to cover expenses related to their rental properties.

With so much to lose, tenant advocates and landlord lobbyists alike have called on governments to step in: to come up with the cash, impose a solution or broker a deal. Of course, not everyone agrees on what should be done. Should public money cover the debt, should landlords take a haircut (or a bath), should tenants be on the hook for payment plans — or some combination thereof?

King County is on the cutting edge of devising practical solutions to this knotty problem, and other jurisdictions around the country are taking note. The county is using $41 million in federal funds for several rent relief programs, the largest of which — $18 million — focuses on bulk payments to large landlords, both private and nonprofit. But the landlords don’t get all their money back, and they must agree to conditions.

For a given tenant, the landlord receives 80% of rent or fair market rent for that unit, whichever is less, for a maximum of three months. So, for example, if a tenant hasn’t paid for five months, two months must be forgiven. All tenants behind on rent must be included — the landlord can’t pick and choose — and the landlord must also agree not to raise their rents or evict without good cause until March 31, 2021. Some landlords may balk at the conditions, but in the end it’s a generous payout compared with the alternative, which is nothing. The program is expected to help more than 10,000 King County households catch up on rent.

The need for a lottery points to a larger problem. However impressive the scale of this King County effort may be, it won’t be enough. The CARES Act money must be spent before the end of this year — that’ll be easy. But what about those who aren’t chosen for assistance, and those who continue to struggle next year?

The boldest proposal, departing furthest from the status quo of landlord-tenant relations, is to “cancel rent” altogether. The Tenants Union of Washington State and Be:Seattle are leading a campaign calling on Gov. Jay Inslee to suspend rent and mortgage payments during the pandemic, among a suite of demands intended to establish housing as a human right. The campaign is part of a national #CancelRent movement that began this spring. While the political and legal obstacles to winning such radical demands are formidable, this effort promises to at least build pressure for solutions that leave tenants debt-free and protected from eviction.

On the other end of the spectrum are measures that keep tenants on the hook for rental debt but buy them time. Already, Inslee’s order requires landlords to establish a repayment plan “based on the individual financial, health and other circumstances” of a tenant before proceeding to eviction after the moratorium ends. A further step would be to stipulate that rental debt accrued during the pandemic can never lead to eviction. Debt is still owed, but it’s not grounds for kicking a tenant to the curb.

This change could ultimately benefit landlords, too, says Jon Grant, director of program development at Wellspring Family Services, which administers several eviction prevention programs in King County. “It opens a new conversation between the landlord and tenant to work out a repayment plan, rather than close the conversation through eviction,” he explains. “This could dramatically reduce the rates of eviction and the societal impacts that follow, and ultimately result in more landlords getting their debts paid.”

Still, in many cases repayment plans will not be enough. For tenants to emerge from this crisis without debilitating levels of debt and for landlords to recover a significant portion of unpaid rent, governments will have to step in with more cash. Grant says that given the scale of the problem, no one group can be expected to shoulder the burden of a solution. “As a community,” he says, “landlords, tenants and the public will have to rebalance the housing market through an amount of debt forgiveness, rental assistance to landlords and enacting new policies to stabilize tenancies.”

In that last category, one tantalizing possibility is some form of statewide rent control. In 2019, Oregon and California both approved statewide caps on rent increases, leaving Washington the only West Coast state with no rent stabilization law. Perhaps, when the rent freeze that accompanies our statewide eviction moratorium eventually expires, it can be replaced with a policy modeled after the ones in these states, or even the stricter rules in place in British Columbia.

So what will happen? That depends on a host of factors: who wins the presidency, how fast we can get the coronavirus under control, what happens to the economy, how bad the rental debt problem gets and, above all, what kind of organized pressure is mustered and applied to elected officials at all levels of government. The stakes of solving the rental debt problem are high. Failure will ruin lives and deepen racial inequities. But if we do it right, we could end up in a better place than we were before the pandemic.