The company’s decision to close two grocery stores over hazard pay is a political move. The economics are more complicated. 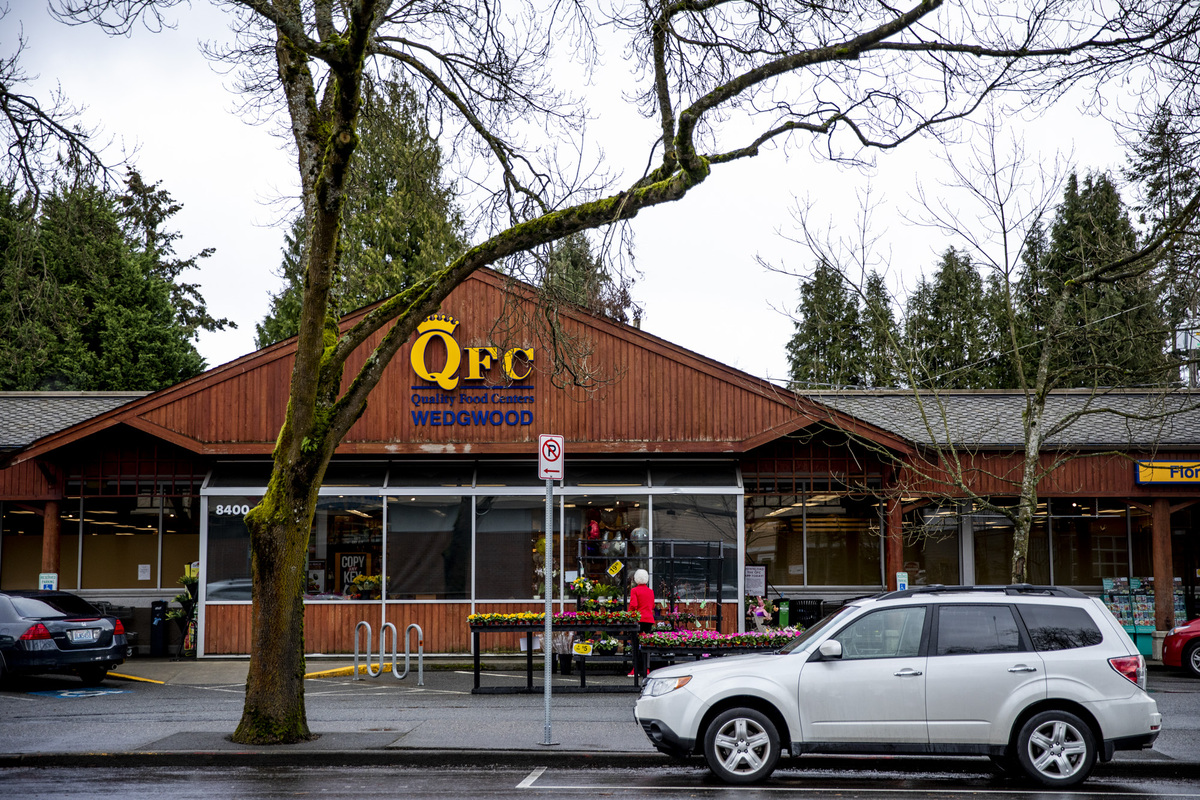 QFC in Wedgwood on Feb. 22, 2020. Kroger, the parent company of QFC, is closing two of its Seattle grocery stores. The company said the closures are in response to the city's new law mandating $4-an-hour hazard pay for grocery store workers during the pandemic. (Dorothy Edwards/Crosscut)

A couple weeks ago, I applauded the Seattle City Council for securing hazard pay for grocery workers. But in the back of my mind I wondered if I’d eventually have to write this column you’re reading now. Supermarket retailer Kroger had recently announced the closure of two grocery stores in Long Beach, the first California city to introduce a “hero pay” ordinance. Kroger blamed the new law. Would it pull the same stunt here in Seattle?

As it turns out, yes. Last week, Kroger-owned QFC announced that two of its 13 Seattle stores will close in April. One happens to be my neighborhood QFC, just a few blocks from my apartment on Capitol Hill. It’s not exactly a food desert up here, but still, I’m feeling pretty grumpy about the whole thing. Probably the 109 workers whose future employment is up in the air are feeling grumpy, too.

But that hasn’t changed my mind about the hazard pay law, and I want to explain why. Let’s put aside the question of whether grocery workers need and deserve hazard pay, because of course they do. Unless you count QFC’s protestations about how it’s been lavishing care and rewards on its workforce throughout the pandemic, opponents of these new laws don’t typically argue that workers already make enough money. Rather, they argue that, because of its ultrathin margins, the grocery industry simply can’t absorb the extra costs.

This is basically how Kroger explained its decision to close the stores, which it says were already “long-struggling” and “underperforming” before the pandemic. Of course, the company won’t open its books to public scrutiny, so we have only its good word that this move is a business necessity. I’m not generally inclined to trust corporate pronouncements, but this one surprised even me. Pretty much every news story on the Seattle closures repeated QFC’s dramatic claim that the new law “will increase our store operating costs by an average of nearly 22%.” I thought that sounded suspiciously high, so I put on my thinking cap and did some simple math.

The grocery industry is all about reselling goods. A store’s largest cost — consuming 70% or more of its total revenue — is purchasing those goods wholesale. A little over half of its remaining costs are labor-related, and the rest comprise rent, utilities, maintenance, depreciation and miscellaneous expenses.

QFC says its labor costs equal 13% of total sales, and its Seattle labor costs average $25.96 an hour, including benefits. (That’s believable: There tend to be a lot of newbies starting at $16.79, just over minimum wage, and a lot of old-timers near $23, the top of the union-won wage scale, with a sprinkling in between.) In that case, $4 an hour hazard pay, generously admitting an extra dollar for ancillary expenses like increased payroll taxes and pension contributions, will raise QFC’s labor costs by less than 20%. But how about the company’s operating costs?

“Operating costs” are generally understood to include all the day-to-day costs of running a business. This can’t be what Kroger means, however, since a 20% increase in labor costs wouldn’t lift total expenses more than a couple percentage points. Maybe Kroger is excluding the cost of goods sold? That would be a nonintuitive but still defensible definition. But even then, it’s hard to conceive how the new law could possibly raise store operating costs by more than 10% or 12%. That’s significant, but it’s nowhere near 22%.

Is this a mistake? A bald-faced lie? Or perhaps Kroger, like Humpty Dumpty, uses words to mean just what it chooses them to mean. Does the company have some obscure, in-house definition of operating costs that no one else knows? I asked QFC’s media relations department to show me the company’s math, and got a cheerful reply explaining that $4 is between 20% and 22% of $19.97, the company’s average hourly pay at its Seattle stores. This is true. But it’s not the statement that was printed on the “fact sheet” and reprinted in news stories across the nation.

After all that, it’s tempting to call the store closures a political move, pure and simple. There’s little doubt that this is a political move. Tom Geiger, special projects director at UFCW 21, the union that represents grocery store workers in the Puget Sound region, notes that Kroger doesn’t habitually issue press releases when it closes down a store. “It really seems to me a shot across the bow to other communities across the state and across the nation,” he says.

If that’s the game, it’s not entirely working. A number of California cities have already followed Long Beach’s lead. Burien one-upped Seattle this month by requiring $5 hazard pay, and King County is considering an ordinance, too. However, it’s easy to imagine the store closures making elected officials nervous and giving ammunition to opponents of hazard pay. If Kroger’s political move helps to confine these laws to a few hyperprogressive pockets of the country, then it could be considered the mother of all smart business moves, too. 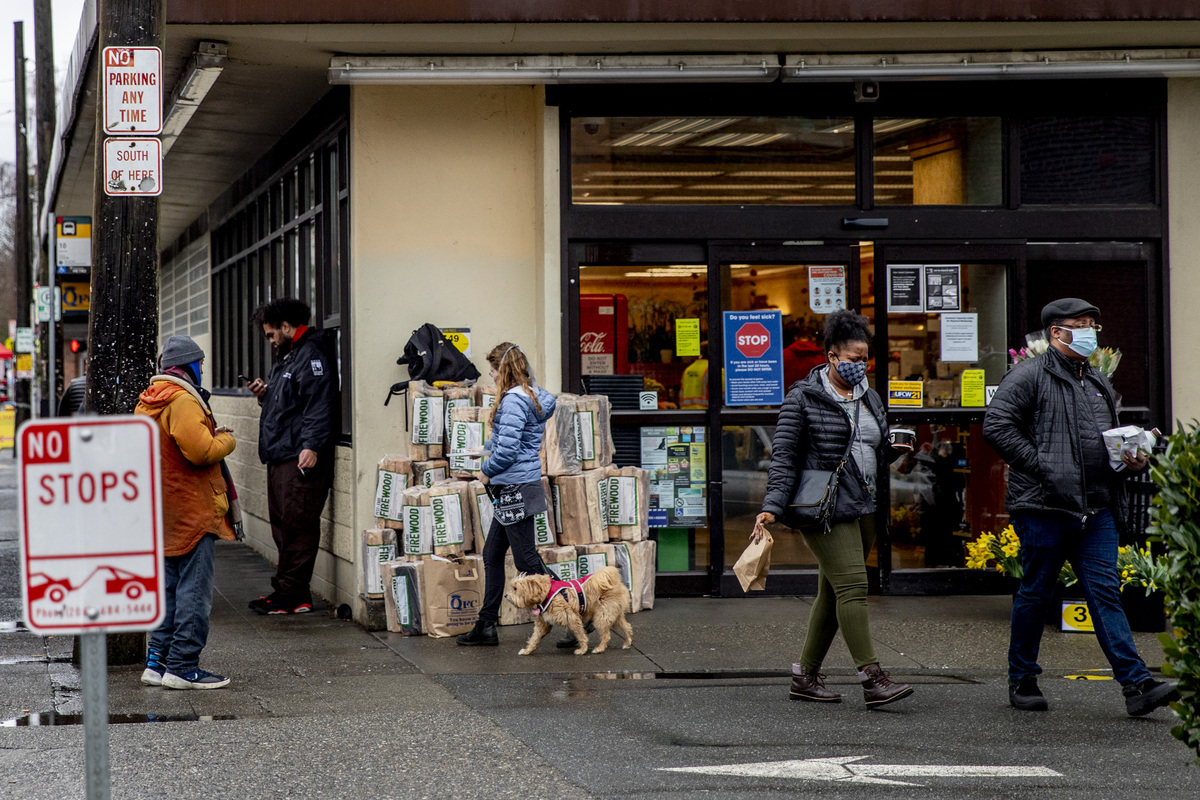 QFC in Capitol Hill on Feb. 22, 2020. The 15th Avenue East store is one of two QFC stores to close in Seattle following a city law mandating $4-an-hour hazard pay for grocery store workers during the pandemic. (Dorothy Edwards/Crosscut)

QFC in Capitol Hill on Feb. 22, 2020. The 15th Avenue East store is one of two QFC stores to close in Seattle following a city law mandating $4-an-hour hazard pay for grocery store workers during the pandemic. (Dorothy Edwards/Crosscut)

But none of that answers the question of whether the store closures are a rational business decision in a more mundane sense, and whether they portend other impacts, like an increase in grocery prices or a decrease of store or staff hours. For sure, grocery corporations have enjoyed record sales and windfall profits during the pandemic. But how easy will it really be for them to absorb the added costs of $4 or $5 an hour hazard pay?

There is a strong case to be made that these laws, if they were adopted nationwide, could more than zero out profits for some chains — including Kroger and Albertson’s, which also owns Safeway. The short version is this: Grocery industry profit margins generally hover in the very low single digits, so a 2% or 3% increase in total expenses could easily land them in the red. To remain profitable while the hazard pay laws are in effect, they’d have to make adjustments.

But these corporations do have other options to weather a period of unprofitability, especially right now. They could dip into their substantial cash on hand, sell or issue shares (Kroger spent about $1 billion on share buybacks in 2020) and issue bonds or otherwise take on debt — money is cheap, and the Federal Reserve is backstopping the corporate bond market, after all. Of course, that these options exist doesn’t mean the grocery chains will choose them. But there are good reasons to think they would, to a significant extent at least.

“Accelerating” shutdowns of stores that may already be slated for closure is one thing, but in general, it doesn’t make sense to make long-term business decisions in response to unusual and temporary costs. Closing down and starting up stores is expensive. Competition will tend to restrain price hikes, as companies fight for market share. And there are limits, especially for unionized grocery stores with contractual agreements, to how much they can trim staffing. QFC may claim that “each QFC store has its own Profit and Loss and must be financially sustainable,” but that is a corporate decision, not some kind of natural law.

Here we get into the tricky matter of economic prediction and political calculus: trying to guess what corporations will actually do, when you can’t trust one bit what they say they’ll do. Hazard pay proponents have wagered, I think reasonably, that whatever harmful adjustments the grocery corporations might make will be greatly outweighed by the benefits to workers. (In practice, too, it’s unlikely that these laws will sweep the entire nation, making the costs much easier to absorb.)

It’s worth noting that advocates first preferred and fought for publicly funded hazard pay for all frontline essential workers nationwide. And, as much as Kroger might pretend that these laws were sprung on them unawares, UFCW has been trying to engage the grocery companies in dialogue, urging them to reinstate $2 hazard pay since it was discontinued last spring. If the unionized chains had done so voluntarily when COVID-19 caseloads began rising again and the U.S. entered its “second wave,” my guess is we wouldn’t be having this fight now. At this point, it’s about moving cash into workers’ hands as quickly as possible. Hazard pay plays well with the public and, unlike restaurants, the grocery industry is visibly doing very well. Winning gains for low-wage workers is never easy — when you see a political opportunity, you grab it.

One final thought to chew on. Corporations routinely win acclamation for “disrupting” the economy in pursuit of profit, consequences be damned. But somehow public officials, acting in the interests of workers and communities, are supposed to be extremely cautious, taking no risks at all, treating the economic status quo like a dragon that must not be poked — because, I guess, it’s working so well? One of the principles driving the meteoric and extremely disruptive rise to power of Seattle’s hometown giant Amazon is a “bias for action” — being unafraid to take calculated risks. Our city government showed a bias for action in mandating grocery worker hazard pay, and I’m here for it.