Could Seattle become like Vienna and house everyone affordably? 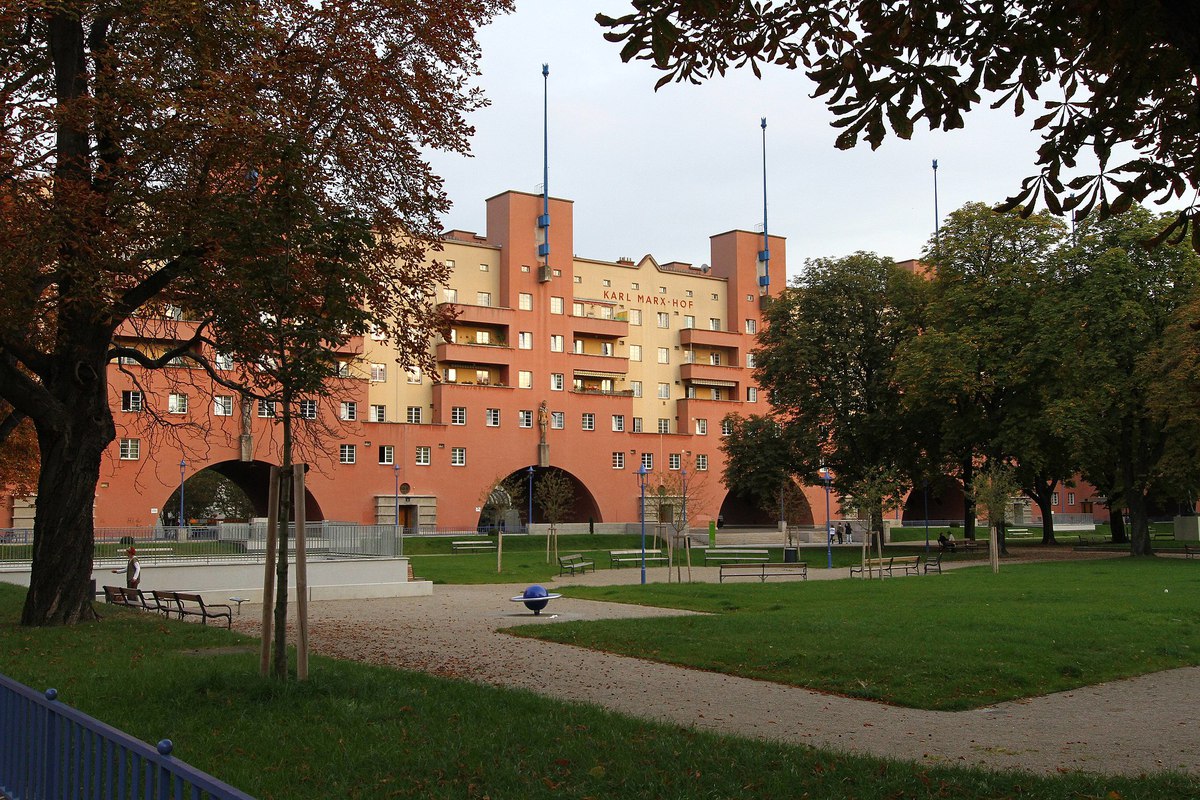 The Karl-Marx-Hof, a social housing project, in Vienna. (Georg Mittenecker via Wikimedia Commons)

Renters across the Seattle area are wondering when the post-pandemic rent rebound will catch up with them. Will their monthly cost of living suddenly rise by $50, or $200, or even more? Will they have to move because they can’t afford the increase? Will they have to squeeze into a smaller space or end up living far from work, stuck with a lengthy commute?

Meanwhile in Vienna, Austria, the 60% of residents who live in social housing have no such worries. They’ll never have to pay more than 20% to 25% of their income in rent, thanks to city regulation. That’s a stark contrast to Seattle, where over 42% of renter households are cost-burdened, paying more than 30% of their income in rent. Vienna’s commitment to affordable social housing was first won by left-wing movements in the early 20th century and financed through progressive taxation. It’s still benefiting residents today.

Could Seattle move in this direction? To get an ambitious social housing agenda off the ground, much depends on our next mayor. I asked the five leading candidates how important a project they think this is on a scale of 1 to 5 and what they’ll do to make it happen.

Jessyn Farrell, Lorena González and Andrew Grant Houston all gave expanding nonmarket housing a 5 and agreed that the city should establish a goal — one based, initially at least, on the size of the city’s rent-burdened population or the shortage of affordable homes.

Farrell put a number on it: Her campaign promise to build 70,000 affordable housing units in eight years, she said, roughly corresponds to a goal of expanding nonmarket housing to 20% of Seattle’s total housing stock. That means more than doubling the current share, according to an estimate by Doug Trumm at The Urbanist.

Bruce Harrell’s campaign sent me a brief statement that didn’t directly answer my questions about importance or establishing specific goals, but acknowledged the affordable housing crisis. He expressed openness to the idea of social housing and promised to “optimize the best possible response to this challenge."

Colleen Echohawk wrote in an email that she strongly supports social housing, but she emphasized that her first priority is homelessness and bringing everyone inside in 14 months. As progress is being made on that front, she said, she would work on setting a goal for social housing.

“The city has significant financial needs … including transit, infrastructure maintenance, support of essential workers and preparing for climate change,” she wrote. “I hesitate to set a top down goal on social housing without engaging the council on a comprehensive financing strategy for city needs.”

Of course, building permanent homes for people exiting homelessness will add to the city’s stock of affordable, nonmarket housing. That in itself is progress on social housing, though it stops short of a more visionary approach.

One of the most striking characteristics of the Vienna model is that social housing isn’t restricted to low-income residents. While there’s a modest income limit to ensure that open units aren’t snapped up by the wealthiest residents, no one ever has to leave because their income rises. That makes for mixed-income buildings and neighborhoods. The inclusion of higher-income residents makes the system more self-sustaining (they can pay more) and has a moderating effect on rents in the private market, which must compete with the rent-controlled public sector. The whole operation, including new construction, is subsidized through a 1% payroll tax split between employers and employees.

Here in Seattle and most U.S. cities, by contrast, we’re mostly locked into a model that focuses on and tends to segregate the poor. This is partly due to financing; the federal Low Income Housing Tax Credit program incentivizes developers to create affordable housing, but it must be income-restricted. It’s partly due to the mentality and political reality of scarcity. When local funds are gravely inadequate to deal with massive crises like poverty and homelessness, it seems wrong to do anything but focus on the people with the greatest needs. It’s also partly due to culture; the U.S. has a long tradition of elevating (and subsidizing) homeownership, and decades of accumulated social stigma around “welfare” and public housing. Seattle has a few examples of mixed-income public housing — including NewHolly, High Point and Rainier Vista — but they’re few and far between.

Do the candidates think it’s important for Seattle to break this mold? González and Farrell give it a 5 out of 5, Houston a 4. Farrell points out that the housing affordability crisis is felt far up the income ladder, and also offered more political reasoning:

“Social programs, when they are applied broadly — I think of K-12 public schools, Social Security and access to our public university system — have greater political support and they’re less vulnerable to budget cuts in hard times,” she says.

This may be true, but developing a plan and raising the resources to achieve such a momentous shift in Seattle’s housing policy will be a challenge. How do the candidates intend to make it happen?

González laid out a multipronged approach, including expanding new construction funded through Seattle’s Office of Housing; purchasing apartment buildings that are still “naturally” affordable to take them off the private market; and strategically converting other types of existing buildings, like office space or arts venues, into social housing.

González notes that Seattle’s Equitable Communities Initiative task force recently recommended that the city support lease-to-purchase programs. She is interested in exploring how affordable homeownership can be part of a larger social housing agenda.

Of course, none of this will be cheap.

“We need to be able to fund these strategies,” says González. “The clearest opportunity is through our next housing levy.”

The 2016 housing levy, a property tax that will bring in $290 million over seven years, is up for renewal in 2023. In the meantime, she says the city should be “taking a look at the capacity of our nonprofit housing community and of our community organizations, including those currently participating in the Equitable Development Initiative” to make sure they’re supported and prepared to absorb a larger scale of investment. Seattle’s Equitable Development Initiative funds community-driven anti-displacement projects, which often include an affordable housing component.

Houston favors a city income tax instead, which could raise as much as $400 million annually. (A 2019 Court of Appeals decision opened the way for a city income tax of up to 1%.) He says he would direct a quarter of this to the Equitable Development Initiative. Another quarter would fund what he calls an “Evergreen Building Public Development Authority” dedicated to developing sustainable public housing.

“This organization would be in many ways inspired by Austria and Germany in terms of the technology that they use,” says Houston. It would educate designers and workers alike, helping to introduce “cross-laminated timber and more sustainable [construction] practices” to Seattle.

A third quarter of the income tax haul would go to fund “green apprenticeships,” including training for the additional construction workers needed to scale up social housing. (Disclosure: The organization I work for, the Transit Riders Union, has endorsed Houston for mayor.)

“My fundamental critique of our affordable housing conversation is that we typically have aspirations around affordable housing that we don’t then have to hold ourselves to,” she says, “whereas in transportation we create plans, and they may not always be perfect but it means we are then able to stack up the funding and implementation.”

Farrell says she would start with a planning process, then identify funding from all levels of government. She’s hopeful that recent shifts in the state Legislature have improved the chances of extracting more progressive local funding options from Olympia. Farrell says she would look to bond against new local funding and also partner with housing authorities like the King County Housing Authority, which can bond against future rents.

Echohawk underlined the need to minimize regulatory barriers to new housing, which encumber nonprofits as well as private developers. That means reforming the permitting and design review processes, and, as I discussed last week, ending exclusionary zoning so that multifamily and social housing can be spread throughout the city. González, Farrell and Houston all emphasized zoning reform, too.

“I hesitate to even call what we have a market,” Echohawk wrote. “We have a ‘market’ where 75% of the land mass is fenced off from market forces by exclusionary zoning laws that are a holdover from racist redlining regulations.”

Harrell’s promise to “optimize” didn’t fill me with confidence, especially when paired with his opposition to comprehensive zoning reform. But, as a believer in social housing, I was encouraged by the responses of all the other candidates. I hope whoever makes it through the primary, most likely alongside Harrell, will take the time to learn from the others and integrate their best ideas into a grand vision for our city’s social housing future. The Seattleites of today and a hundred years from now deserve it.