Congress, public debt, and the end of neoliberalism

In the U.S., spending on social goods has increased even as the safety net has crumbled. This spells problems for capitalism. 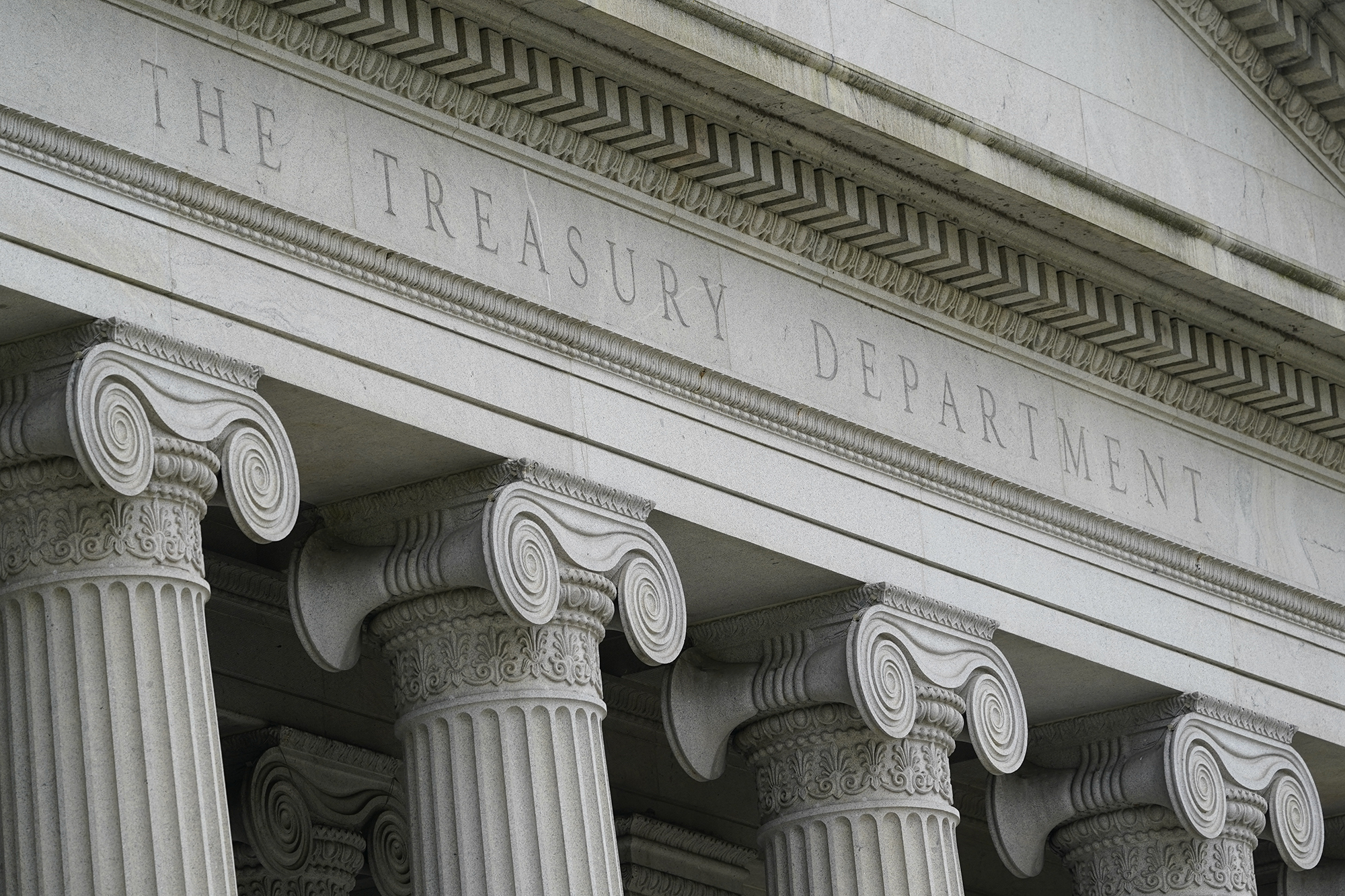 This May 4, 2021, photo shows the Treasury Building in Washington. (AP Photo/Patrick Semansky)

Last week, Democrats and Republicans in the other Washington reached a deal to temporarily raise the debt ceiling through early December. The U.S. government was on track to run out of money around Oct. 18, with potentially catastrophic consequences. Now that a reckoning has been delayed a few more weeks, we have some time to kick back, relax and ponder what our growing mountain of public debt really means.

Back in August, I wrote about the new economic era into which the COVID-19 pandemic seems to have shoved us: “Big, interventionist government is here to stay. And one thing governments will continue to do is spend big money, whether to stimulate a flagging private sector or to try to compensate for its inadequacies.”

I sped through several interpretations of this widely accepted prediction, including one from an investment banker who argued that it’s nothing new — President Joe Biden is only accelerating a trend toward bigger and more active government that’s been deepening, step by step, pretty much since the Great Depression.

This notion lingered in my mind, perhaps because it challenges a simple story that many progressives and leftists like to tell about the past 50 years. According to this story, the neoliberal era that began in the 1970s — and may well have just ended — was all about small government, privatization, cuts to social welfare programs and a turn toward the unfettered free market.

As President Ronald Reagan famously said in 1981, “Government is not a solution to our problem; government is the problem.”

So, what actually happened?

In fact, federal spending, per capita and adjusted for inflation, has continued to rise more or less steadily since 1970. State and local expenditures per capita increased 91% between 1977 and 2018. Not only that, despite some wilder swings of late, total government spending as a percentage of the gross domestic product has been on an upward trajectory for a hundred years.

But maybe this is all just corporate welfare and bloated military and defense budgets. After all, it took money to finance our forever wars and bail out the banks. Was the continued growth in government spending during the neoliberal era all about “wars on terror” and profit for the few?

There was plenty of that, for sure. But social spending has also been on an upward trajectory in relation to GDP in the U.S. and many other mature economies. Indeed, the main drivers of the growth in federal spending since the 1960s have been Social Security, Medicare and Medicaid.

In other words, the investment banker has a point. Is all the left’s talk about neoliberalism a bunch of hyperbole and hogwash?

Neoliberalism was, first and foremost, the handmaiden to globalization. It was about turning production and profit-making into truly global processes, carried out by increasingly transnational corporations. It was about deregulation, knocking down political barriers to the free flow of capital and creating truly global labor markets — which also meant disciplining labor, especially in those parts of the world where it had built up significant structural power.

In the U.S., cuts to social programs were part of the package. In the 1970s, for example, the response to New York City’s fiscal crisis included deep cuts to subsidized health care and higher education, eroding what had been a relatively robust municipal welfare state. In the 1980s, Reagan slashed funding for mental health care; the closure of state institutions without adequate alternatives left many homeless. In the 1990s, welfare reform — imposing time limits, work requirements and penalties — reduced the number of families receiving cash assistance by over 60% in five years. (This story played out in Washington state, too.)

So, why did cuts like these not show up as a decrease in social spending?

First, there’s what was happening in the private sector. As the U.S. hemorrhaged unionized factory jobs and added insecure, low-wage service jobs, more and more people needed assistance. The growth of certain social safety net programs, especially entitlements like food stamps, unemployment and Medicaid, was entirely consistent with cuts in other areas — and even, for that matter, with reductions to what any individual receives through those programs. Put another way: with more mouths to feed, the pie got bigger but the pieces got smaller.

Second, demographic trends played a big role. Life expectancy, though currently falling in the U.S., increased by about eight years from 1970 to a peak in 2014. As birth rates have slowed, the size of the retired population relative to the working population has grown. All this means rising costs for programs that support seniors, namely Social Security and Medicare.

Third, there’s the fact that privatization doesn’t always shrink government spending. Closing public housing and instead giving renters vouchers to use in the private housing market, or swapping public schools for charter schools, isn’t necessarily cheaper or more efficient, though it might be sold that way. It just means that social spending is propping up private profits.

All this helps to explain how rising social spending could coexist with a crumbling social safety net and deepening economic insecurity in the neoliberal era. But it seems to me there’s also something more fundamental going on, with larger implications for understanding our growing mountain of government debt, and indeed for capitalism’s future.

Over the past century, consumer goods have become ever cheaper and more plentiful. This is where capitalism really shines. Competition stimulates invention and incentivizes labor-saving automation. Fewer and fewer hours of human labor are required to produce the shirt you’re wearing or the food that fills your refrigerator. Of course, you buy many wonderful things your 1921 counterpart couldn’t, like vacuum cleaners and smartphones; but at some point, an ever-expanding volume and variety of products have diminishing returns in improving the quality of life. There are limits to individual consumption.

At the same time, another momentous shift has occurred regarding work that directly involves another human being: caring for a child or an elder, teaching a student, treating a patient. As a job category, this kind of labor has grown over the past century from a minor to a massive part of the formal economy. There is an irreducibly human element to this work. Labor-saving efficiencies are possible, but beyond some threshold — one often crossed in schools and hospitals today — quality deteriorates.

People need consumer products throughout their lives. But they tend to need the most human attention at precisely those times of life when they’re not in the workforce making money: in childhood and old age, if disabled or ill, and when learning and training for work rather than performing it. To the extent that child care, elder care, health care and education are not only privileges of the few, governments have to step up and shoulder a good part of the cost.

For this among other reasons, many progressives believe that goods like these should be publicly funded and available to all: universal child care, universal health care, tuition-free college and so on. Suppose for a moment that this actually happens. All the workers in these sectors become public employees, or employees of institutions that receive public funds.

While we’re imagining future utopias, let’s throw in a third category of work: big projects with social value, like repairing our crumbling infrastructure and building new, green infrastructure. As we wade ever deeper into an existential climate crisis, never has there been a greater need for government investment and action on a grand scale. Let’s step up the research and development of new, green energy technologies. Let’s start a Civilian Climate Corps. There’s no shortage of rewarding, socially useful labor waiting to be performed by public-spirited workers.

All this sounds pretty great. So what’s the problem?

The problem is how to pay for it all. And that brings us back to the question of public debt.

Here’s how capitalism is supposed to work. Businesses make a profit by producing goods to sell to consumers. That profit-making process is the core engine that drives the economy. But in order for society to function, other things need to happen, too. Roads need to be built, children need to be educated. The government steps in to fund these things, and it does so by siphoning money away from the private sector in the form of taxes. It diverts some of the juice of that core engine toward social ends.

When the government spends more than it collects in taxes, it issues bonds, to be gradually paid back, with interest, out of future tax revenue. That’s public debt.

In this way, the private sector powers the public sector, but it also constrains it, keeping it on a kind of structural leash. Paid work for public purposes — labor that does not presently produce profit — can take place only insofar as value is siphoned off from past private sector activity (taxes) or from future private sector activity (public debt). Unless someone, somewhere, sometime is making a profit, nothing moves. That’s the rule of the game.

This is all well and good so long as the public sector is of a modest size in relation to the private sector. But what if it grows and grows? That’s what happened in our progressive utopia above. We can imagine that government spending on all those universal goods and big public projects will result in a growing mountain of public debt. Even if we tax the heck out of the rich, it will never be enough to pay for it all.

Of course, our reality is far from that vision, and the story I spun about different kinds of work is highly simplified, too. But I think the basic dynamic is correct. The private sector engine is sputtering and the public sector siphon is growing, unavoidably and for good reasons, more and more demanding. That’s what is at the root of our growing mountain of public debt.

This view is at odds with the conventional one, according to which debt is a problem to be solved through less spending or more taxes. It’s also at odds with Keynes-inspired progressives who argue that rising debt is mostly fine (and even good, given the role of U.S. Treasury bonds in stabilizing the global financial system); perhaps it can keep growing indefinitely, or, when private sector growth picks up, it will naturally level off. And, ultimately, it’s at odds with Modern Monetary Theorists, who argue that the federal government could spend a lot more without issuing debt at all — just mint a trillion dollar coin; that rule of the game mentioned above is an illusion, and once we realize that and revise our policies accordingly, all will be well.

In this view, the debt itself may or may not become a problem, but it’s a symptom of a deeper and ultimately fatal problem, namely an escalating need for public sector spending paired with limits to private sector growth. Through most of capitalism’s history, the profit-making process has been a brutal but effective engine of civilization. Now it’s becoming a brake. It stops us from going where we need to go and doing what we need to do. History may look back at our present moment — the end of neoliberalism — as the rounding of that turn.