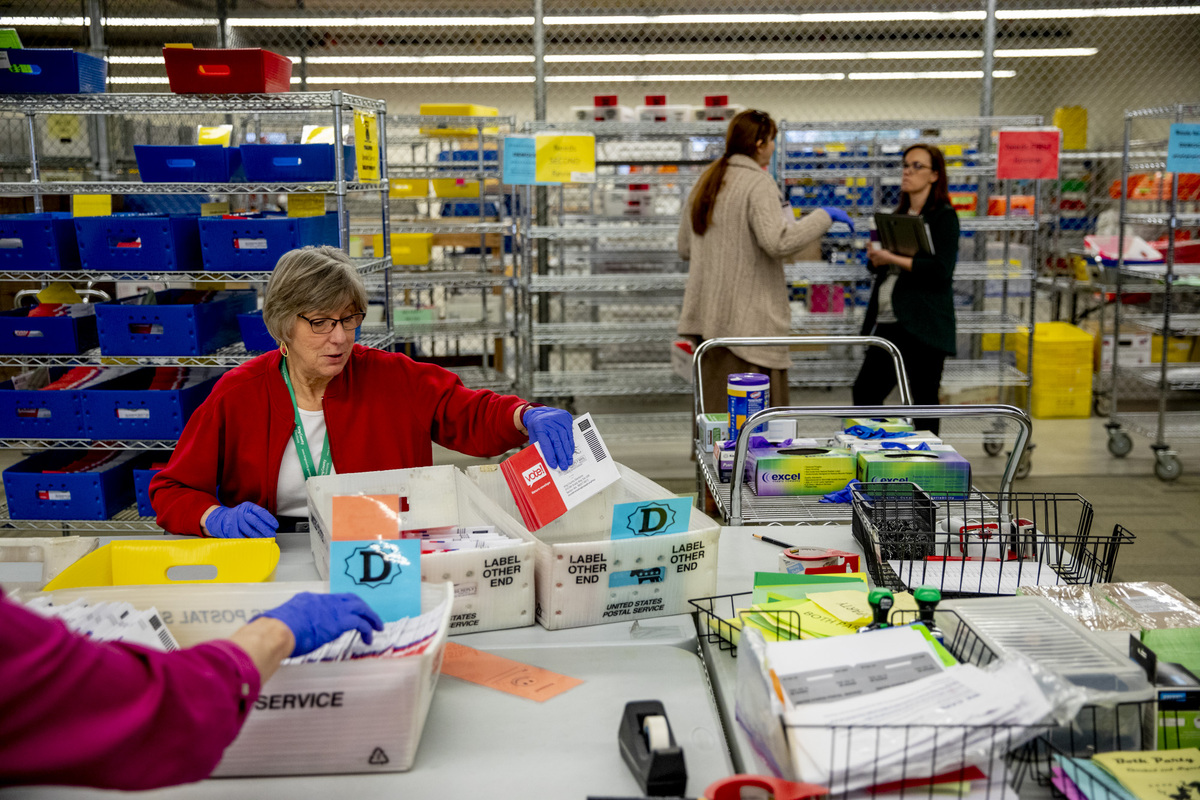 Ballots are processed at the King County Elections headquarters in Renton for Washington state’s presidential primary election on March 10, 2020. Elections workers were required to wear gloves at the time to prevent COVID-19. (Dorothy Edwards/Crosscut)

Washington’s sturdy, tank-like ballot drop boxes are a source of pride for state and local election officials. So when President Donald Trump suggested Monday that those ballot boxes were less than secure, the response was sharp.

“Some states use ‘drop boxes’ for the collection of Universal Mail-In Ballots,” Trump tweeted Monday. “So who is going to ‘collect’ the Ballots, and what might be done to them prior to tabulation? A Rigged Election? So bad for our Country. Only Absentee Ballots acceptable!”

It turns out, Washington state has laws in place to prevent that. And the state, which has been all-vote-by-mail since 2011, has a decade of experience with ballot boxes that counters the president’s claims.

Washington’s top elections official, Republican Secretary of State Kim Wyman, said Monday she knows of no incidents where ballot drop boxes have been tampered with or the ballots inside altered.

“Washington’s experience is that they are very secure,” Wyman said. “We haven’t had any issues with lost ballots or fraud — and our voters love them. I don’t share the president’s concerns about ballot drop box fraud.”

Nationwide, the focus on ballot drop boxes has increased amid fears that cost-cutting measures at the U.S. Postal Service could hamper mail-in voting. On Tuesday, Washington State Attorney General Bob Ferguson announced a lawsuit challenging recent postal service operational changes that he said could undermine the November election. Also Tuesday, U.S. Postmaster General Louis DeJoy said he would pause some mail-system changes until after the election.

The issue has taken on greater importance this year, as more states shift to voting by mail during the COVID-19 pandemic.

In Washington state, more than half of voters in the Aug. 4 primary election used drop boxes to return their ballots, according to Wyman’s office. There are about 450 boxes statewide.

State law requires two people to be present any time ballot boxes are emptied, to ensure there are witnesses to the process. Those people must log the date and time they remove ballots, along with their names, so there is a record of who handled the ballots should anything turn up amiss.

The workers transporting the ballots aren’t volunteers, either. Five county election officials who spoke with Crosscut Tuesday said they use only trained county election employees to transport ballots. Those people have to sign an oath that they will uphold the integrity of the election process.

Every time a ballot drop box is unlocked and emptied, a tamper-evident seal is placed on the access door. That means that when election workers return to the ballot box, they will be able to see if someone opened it and accessed the ballots without permission.

All seals are numbered and the seals’ serial numbers are logged by election workers.

Ballots are then moved from the drop box to the counting facility in another secure container, which also is closed using a numeric seal.

Once the secure container of ballots reaches the tabulation center, the number on the seal is checked against the paperwork that was filled out when the box was emptied. State law requires that a second copy of the paperwork be kept inside the container, for added verification.

Some counties have gone to additional lengths to ensure they can track the process of emptying ballot boxes.

Pierce County, the state’s second most populous, issues county-owned phones to election workers and tracks them via a GPS system as they travel between ballot boxes.

That way, the county knows if an election worker takes a detour or goes anywhere else with the ballots.

“They are given very clear driving directions, and they cannot deviate” from that route, said Julie Anderson, Pierce County auditor since 2009. She said that means even if someone made an unauthorized stop at 7-11 to use the restroom, county officials would know.

The same electronic system in Pierce County lets election workers upload information about dropoffs and pickups in real time, so that the auditor’s office can monitor the status of drop boxes remotely, Anderson said. 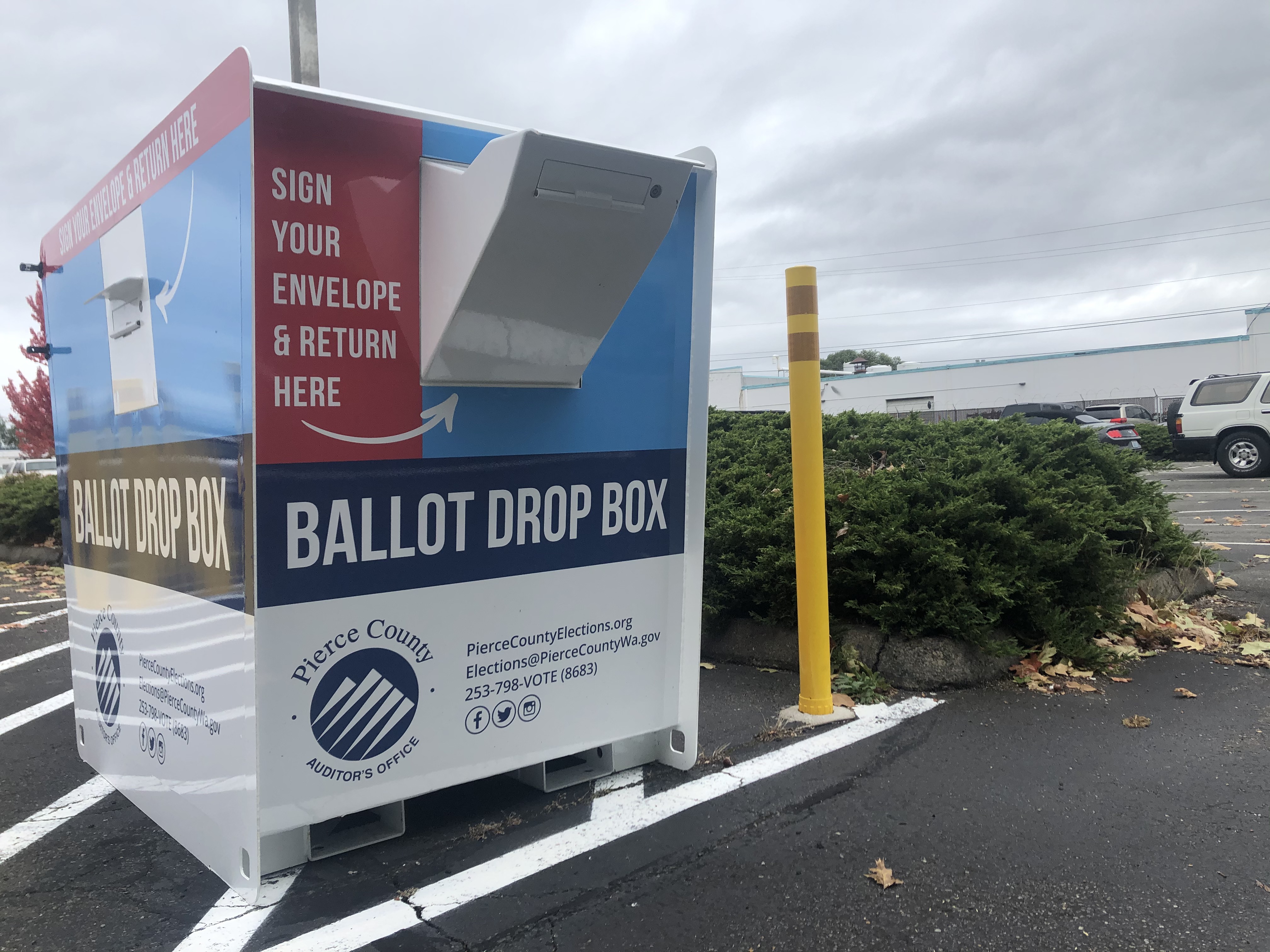 Each ballot envelope has a unique identifier associated with each voter, which ensures that elections officials only count one ballot per person — even if someone were to put multiple ballots in a drop box, or try to flood a drop box with fake ballots, she said.

That’s even the case with the online ballots that King County voters can fill out and print at home, she said.

“You can’t have foreign interference, people printing off envelopes and sending them in,” Wise said. “That’s not how it works.”

Meddling with ballots to achieve a political end would also be difficult, since it’s impossible to tell how a person voted from the outside of a ballot envelope, said Thurston County Auditor Mary Hall.

“Any person can witness, go with us, meet us at a location,” Ross said. “We crave observation, we love when people come observe it.”

Anderson said trained observers from the political parties are often present when drop boxes are emptied in Pierce County, “to make sure nothing is happening.”

Ballot boxes vary in size and weight, but many are several hundred pounds, or even 1,000 pounds. They are also typically bolted into the ground, so they can’t just be picked up and carried away.

Even things that seem like they would compromise a ballot box often don’t. A Thurston County ballot box wasn’t significantly damaged last year when it was hit by an SUV.

And in King County, a collision with a school bus failed to destroy a ballot box a few years back, Wise said. 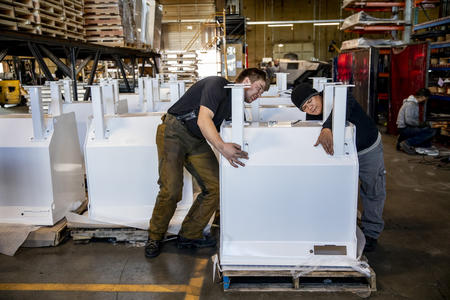 by / October 17
Article continues below