Some WA legislators come to the Capitol armed with guns

It’s legal for state lawmakers to carry firearms while voting on bills and conducting the people’s business. 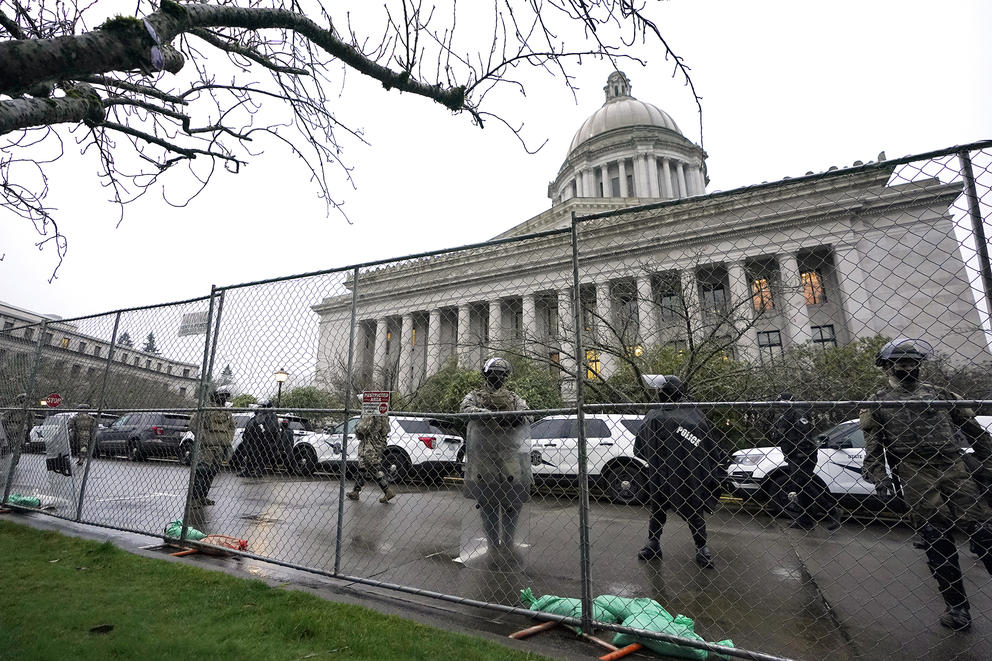 Members of the Washington National Guard stand near a fence surrounding the Capitol in anticipation of protests Jan. 11, 2021, in Olympia. State capitals across the country are under heightened security after the siege of the U.S. Capitol last week. (Ted S. Warren/AP)

The Washington Legislature started its new session Monday behind a security fence and a contingent of National Guardsmen. But after what happened at the U.S. Capitol last week, some lawmakers were also ready to defend themselves, if things went sideways.

Some state lawmakers chose to carry their own personal firearms for additional protection on the Legislature’s opening day.

While there’s no master list of how many lawmakers carry guns inside the state Capitol, it’s not exactly rare. House and Senate rules do not prohibit the concealed carrying of firearms by legislators.

“... I exercise the right regularly,” state Sen. Ann Rivers, R-La Center, wrote in a text message Monday, shortly before a new 105-day session of the Legislature was called to order. “Today is no exception.”

Rivers’ gun of choice is a Smith & Wesson LadySmith, a revolver she said she keeps “on her person” while conducting the people’s business.

Another lawmaker, who declined to be named, said he started carrying a firearm daily in the past year, as threats to lawmakers started becoming a more frequent occurrence.

Others have been packing heat at the Capitol consistently for many years.

“That is standard operating procedure for me,” wrote state Rep. Brad Klippert, R-Kennewick, a Benton County sheriff’s deputy, in a text message.

Klippert said he was taking “no extra steps” beyond carrying his personal semiautomatic pistol on Monday, five days after armed protesters breached the security gate at the nearby Washington Governor’s Mansion. That same day, a mob stormed the U.S. Capitol in Washington, D.C., in a riot that left five people dead.

“As a fully commissioned law enforcement officer I generally always take advantage of my constitutional right to carry off-duty,” wrote Klippert, who has served in the House for more than a decade.

State Rep. Michelle Caldier, R-Port Orchard, doesn’t carry a gun, but said she felt safer knowing that a number of her colleagues are armed.

“Many of the members of our caucus are former or current law enforcement or military, and they do carry or they normally carry,” Caldier said Saturday. “I feel protected to be around those members.”

The nonpartisan National Conference of State Legislatures doesn’t track how many state Capitols allow firearms inside. But the organization said that at least 32 states use metal detectors at their state Capitols. Washington is not among them.

Another organization, the pro-gun Crime Prevention Research Center, estimates that about 20 state Capitols allow carrying firearms in some fashion, according to a recent post by Stateline, a news service of the Pew Charitable Trusts.

State House Speaker Laurie Jinkins, D-Tacoma, said she is concerned about the Washington Capitol’s current policy of allowing guns in the House chambers, but hasn’t considered whether it’s time to adopt new rules banning firearms inside.

In the state Senate, a change to the rules surrounding guns isn't under consideration right now, according to the office of incoming Lt. Gov. Denny Heck, a Democrat who will preside over the chamber. Phil Gardner, Heck's chief of staff, noted that most legislators won't be at the Capitol much this year anyway due to COVID-19 restrictions.

Right now, the state House allows lawmakers with the necessary permit to carry a concealed weapon in the House chambers, including on the floor, where voting occurs. The public can carry concealed firearms, with a permit, in the House galleries and House committee rooms when COVID-19 restrictions aren’t in place.

The state Senate also allows legislators and staff to carry firearms in all Senate buildings, although it has stricter rules for visitors to the Senate galleries that overlook the Senate floor.

Chris Loftis, a spokesperson for the Washington State Patrol, didn’t share his agency’s views on the two chambers’ firearms policies, saying only that the Patrol “enforces the laws as they are written.”

Some lawmakers on Monday took different kinds of precautions that didn’t involve firearms. State Rep. Drew Stokesbary, R-Auburn, didn’t bring a gun, but did bring a set of casual clothes he could change in to, in case he needed to slip out of the Legislative Building without being noticed. He said those would allow him to blend in with the crowd better than his usual legislative uniform of a suit and tie.

“I’m not really worried, but obviously for the first time in my six years it has gotten to the point where I had to consciously think, ‘What will I do if this happens?’ ” Stokesbary wrote in a text message two days after the attack on the U.S. Capitol.

Sen. Steve Hobbs, D-Lake Stevens, said heading into Monday’s opening-day events that he was confident members of the Washington National Guard and the State Patrol had security pretty well covered. Hobbs is a lieutenant colonel in the Washington Army National Guard who previously served in Iraq and Kosovo.

“I do have a samurai sword and a Captain America shield in my office, but that’s only for last resort,” Hobbs joked via text message.

Democratic state Rep. John Lovick, a former state trooper and past Snohomish County sheriff, similarly said he doesn’t feel the need to carry a firearm at the Capitol.

Sen. Phil Fortunato, R-Auburn, wasn’t disclosing his personal protection plans, but noted that his recent loss of about 15 pounds has made it easier for him to wear his “inside the waistband holster.”

“It means I can carry a bigger gun with more rounds instead of my little pocket pistol,” said Fortunato, who would neither confirm nor deny he was carrying a firearm on Monday. 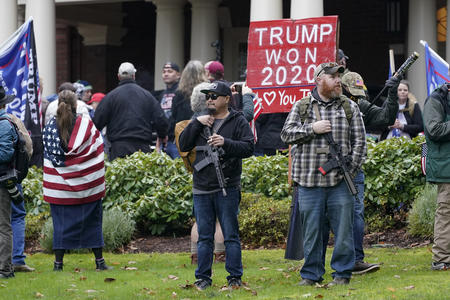 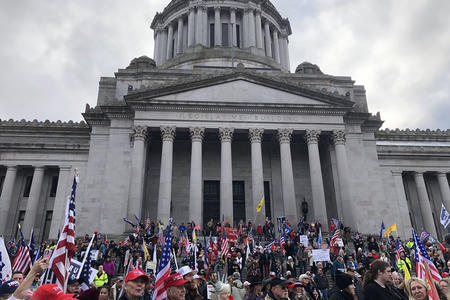 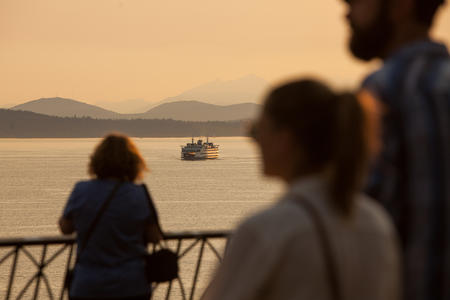 by / December 18 /
Article continues below