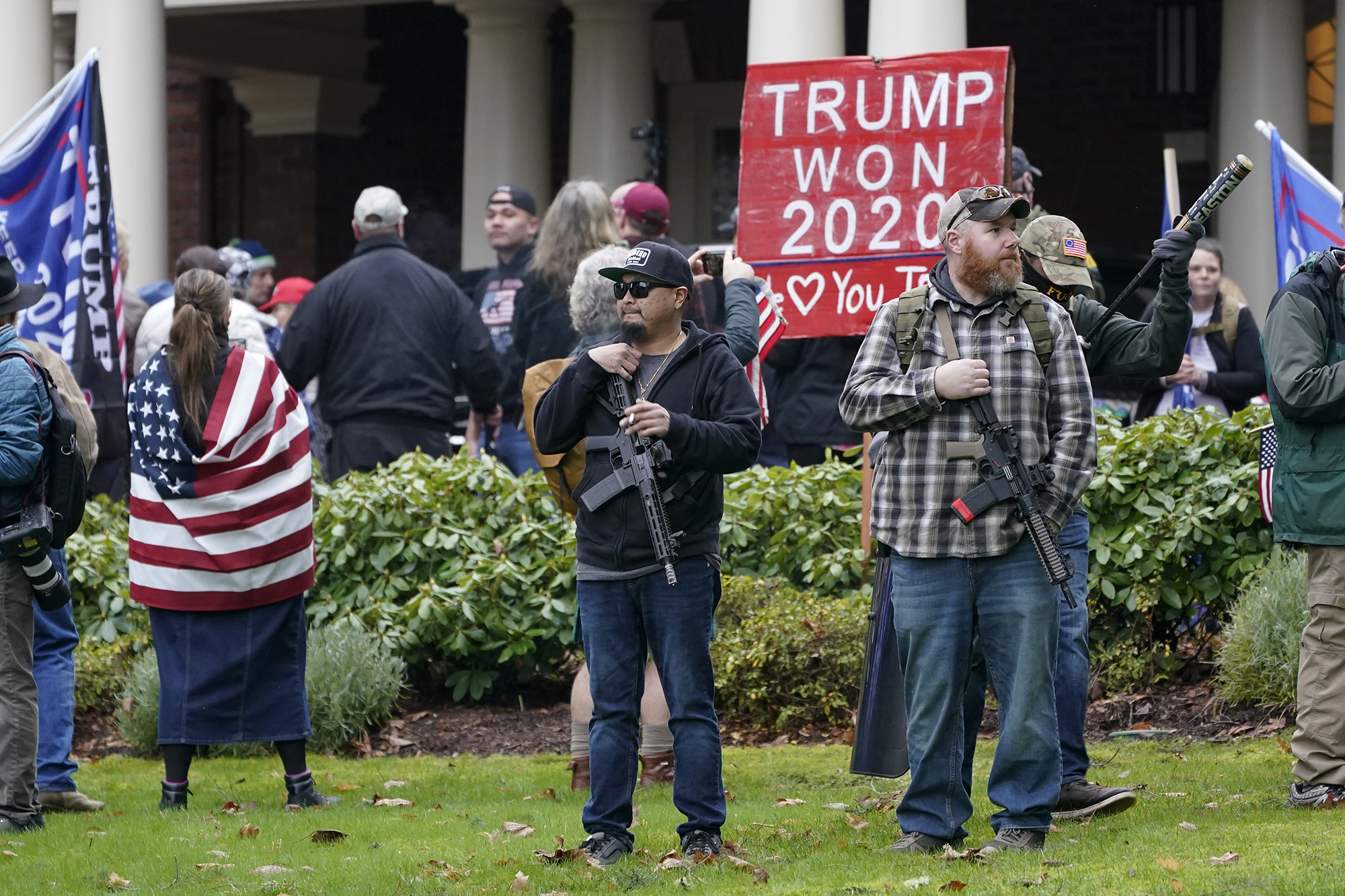 Supporters of President Trump, including those with guns and a bat, stand outside the Governor's Mansion after breaching a perimeter fence, Jan. 6, 2021, at the Capitol in Olympia. This followed a protest against the counting of electoral votes in Washington, D.C., which affirmed President-elect Joe Biden's victory. The area was eventually cleared by police. (Ted S. Warren/AP)

Washington’s Legislature convenes in Olympia Monday for a new session that will be unlike any other in state history.

State lawmakers plan to conduct most of their 105-day session remotely, holding hearings on legislation and even voting via web conferencing.

But first, they need to convene in person so they can adopt new rules allowing that to happen.

And a cloud hangs over the Capitol campus in Olympia, just days after a mob of President Donald Trump’s supporters stormed the U.S. Capitol to try to stop the certification of Democrat Joe Biden’s November election victory.

Armed protesters breached the gate of Washington’s Governor’s Mansion the same day, with some in the crowd urging protesters to return for the first day of the legislative session.

State officials had already planned to keep the Capitol building and other legislative offices closed to the public because of the COVID-19 pandemic. But security plans will be more robust than usual for Monday’s opening ceremonies.

On Friday, Gov. Jay Inslee announced he would activate 750 members of the Washington National Guard to help protect the Capitol. Some of the guardsman will be armed, an Inslee spokesperson said.

New security fencing and checkpoints were also set up over the weekend.

“Certainly, we do have to plan,” House Speaker Laurie Jinkins, D-Tacoma, said at panel event on Thursday.

For security reasons, Jinkins said she wasn’t going to share the specific plans being put into place to ensure legislators' safety.

While one far-right group, the Washington Three Percenters, and a group called Hazardous Liberty said they were canceling their plans to occupy the Legislative Building this week, other groups may show up and try to force their way into the building.

At the same time, legislative leaders from both parties said they can’t let armed militants or would-be insurrectionists keep them from conducting the people’s business.

Here’s what lawmakers’ work is likely to entail in the 2021 session, which runs through late April.

Legislators’ main job is to leave Olympia with a new two-year budget.

With Democrats in control of both chambers of the Legislature and the governorship, there may be fewer of the knock-down, drag-out budget fights that characterized years when Republicans had partial control of state government.

Still, lawmakers will face challenges. Among them: how to pay for pandemic response when state revenue projections have dropped by $3.3 billion through 2023.

Many Democrats want to raise taxes on corporations or the wealthy to help pay for substantial investments in COVID-19 relief programs, including help for workers, renters and small businesses.

Some of the taxes under discussion include a new tax on capital gains, which would tax profits from selling assets such as stocks and bonds, and a payroll tax on large companies with highly paid employees. A recent Crosscut/Elway Poll found that voters were divided on those tax measures and others, although voters rarely are inclined to say they support taxes.

Republicans argue increased tax revenue is unnecessary. They think new taxes would hurt the economy — although they, too, see the need to help businesses during the pandemic.

The state has about $1.8 billion in its emergency rainy day fund. But a bipartisan consensus is emerging that the Legislature needs to spend a significant amount of money to prevent businesses from having to pay skyrocketing taxes for unemployment insurance next year.

This tax increase is built into the way the system is set up. Because so many people filed for unemployment during the pandemic, the trust fund that pays for those benefits has been drawn down significantly and needs to be replenished. Under state law, employers’ unemployment premiums rise to ensure that happens.

The unemployment crisis has created “an enormous deficit” in the “multiple billions of dollars” — enough to wipe out the state’s entire emergency fund, said state Sen. Christine Rolfes, the Senate’s lead budget writer.

“Taxes are going to go up on every business if we do nothing,” said Rolfes, a Bainbridge Island Democrat.

Senate Republicans argue that the rainy day fund, combined with money from the latest federal COVID-19 relief package, should be enough to pay for the state’s recovery.

“If we continue to take money away from our job creators to do this, we will just be in a worse situation,” said Sen. Shelly Short of Addy, the Senate Republican floor leader.

Besides providing help for businesses, Democratic leaders want to spend more on rental and food assistance, as well as child care programs — things they say are crucial to ensure Washingtonians can survive the pandemic.

K-12 schools are another major concern. As schools reopen after months of pandemic-related closures, more money may need to be spent on school counselors and nurses, Rolfes said. Many schools still won’t be able to operate at full capacity due to COVID-19 requirements, creating additional technology costs as they continue to operate at least partly virtually, she added.

Legislators also are focused on increasing money for the state’s public health system and ensuring efficient distribution of COVID-19 vaccine doses. That’s another area where Rolfes said she expects the state will have to spend money above and beyond what the federal government is providing.

Democratic legislators are pursuing a slate of police accountability reforms, following a year of protests against police brutality and the treatment of Black Americans.

One proposal would make it easier for the state Criminal Justice Training Commission to decertify police officers who have been found to have committed misconduct or engaged in discrimination. Revoking an officer’s certification would mean that person can’t work as a police officer anymore in Washington state, even by moving to another department.

Another measure would ban the use of chokeholds and lateral neck restraints, while a different bill would  require officers to intervene when witnessing misconduct. Both were issues that received intense scrutiny following the death of George Floyd, who died under the knee of a Minneapolis police officer as other officers stood by.

In this month’s Crosscut/Elway Poll, strong majorities of voters surveyed said they support a ban on police use of neck restraints, as well as making it easier to decertify officers with troubled track records.

“These are things that have to be addressed, and have to be dealt with,” said state Sen. Manka Dhingra, a Redmond Democrat who is working on police reform bills.

Another proposal that has yet to be introduced would limit qualified immunity for police, so that private citizens can file civil lawsuits against officers for abuses of power.

State Rep. Jesse Johnson, D-Federal Way, is sponsoring the bill to ban the use of neck restraints. He said the year’s events have served as a reminder that lawmakers “really need to look at equity, and racial equity specifically.”

“Preserving and protecting human life must be at the center of public safety,” Johnson said.

Other proposals would create a database of police uses of force, as well as an independent state office to investigate use of force incidents.

Inslee, the Democratic governor, is once again pushing for the Legislature to adopt a clean fuel standard, which would require makers of gasoline and diesel fuel to reduce carbon emissions. He advocated a similar policy the past two years without success.

Inslee also is working with Democratic lawmakers on an ambitious cap-and-trade plan, which would force polluters to steadily reduce their emissions in the coming years. The plan would also raise at least $600 million annually for the state by setting up a marketplace in which companies that exceed their emissions limit could purchase credits, or allowances, from companies that are below their limit.

It’s a full agenda for a Legislature that has to adjust to convening on Zoom and Microsoft Teams, as opposed to inside the marble chambers of the state Capitol.

After Monday’s opening ceremonies, very few lawmakers and staffers will be on the Capitol campus each day, as part of plans to reduce the risk of COVID-19 infection.

Legislative leaders say that will likely cause things to move more slowly as lawmakers and staff adjust to the new system.

Jinkins, the House speaker, said she has asked her colleagues to file fewer bills than normal, anticipating that the Legislature won’t be able to consider as many as in past years.

The upside for members of the public is that, because all committee hearings will be held virtually, it will be much easier to testify on legislation from home, as opposed to taking time off work and traveling to Olympia.

All remote committee meetings and floor sessions will be streamed and archived on tvw.org.