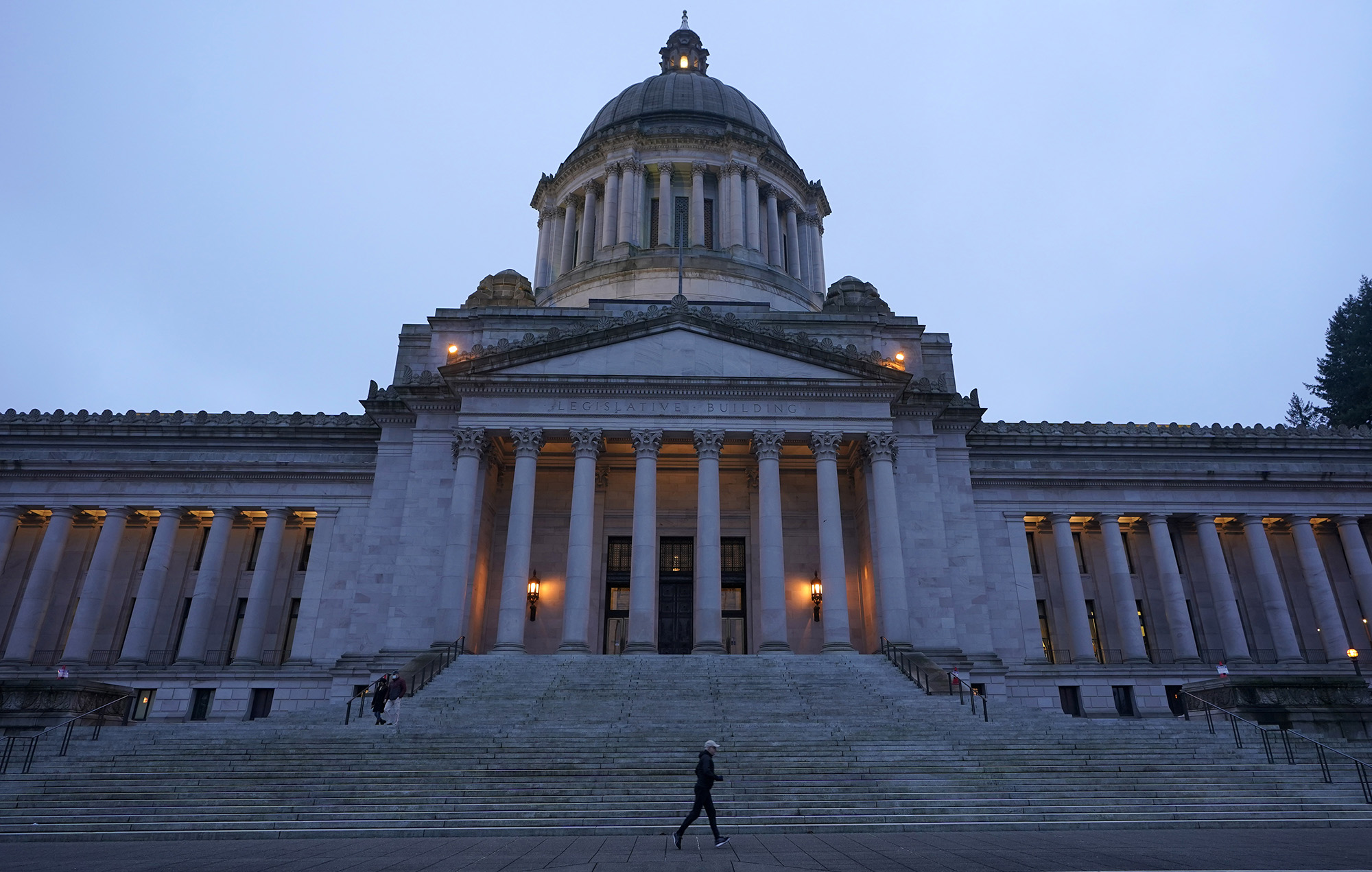 A jogger runs past the Legislative Building just before dusk on Dec. 21, 2021, at the Capitol in Olympia. (Ted S. Warren/AP)

For the first time in eight years, the economy tops the list of issues Washington voters want the Legislature to address in 2022, eclipsing homelessness and COVID-19 as the leading concerns statewide, according to a new Crosscut/Elway Poll.

The new poll, released Thursday, asked 400 registered voters an open-ended question about what topics state legislators should focus on when they convene for a new session next week. Nearly a third of respondents — 32% — named economic issues as the most important for the Legislature to tackle.

While the economy typically ranks high among voters’ list of priorities, in the past few Crosscut/Elway Polls, the coronavirus and homelessness have led as the top issues.

Last January, 52% of poll respondents said the Legislature should focus most on responding to the novel coronavirus; that number dropped to 23% this year.

This year, only 21% of those surveyed named homelessness as something the Legislature must try to solve, compared with nearly a third of poll respondents in 2020.

Pollster Stuart Elway said the shift in voter priorities largely reflects how voter anxiety over the coronavirus is receding from levels seen a year ago. A similar number of voters last year said they were concerned about the economy, he said, but a far larger number at that time were deeply worried about COVID-19.

“There’s an old saying in polling that the most important issue is either the economy, or it’s something else,” Elway said. “The economy has not been at the top of the list since 2014, but it’s back.”

The Crosscut/Elway Poll has a 5% margin of error at the 95% confidence level, which means that if the survey had been conducted 100 times, the results would be within 5 percentage points of the results reported here at least 95 times.

Those who named the economy as a top issue specifically mentioned inflation, employment rates and housing prices as concerns.

Renee Townsend, who owns a small contracting company in Skagit County, said her business has slowed because of material shortages, as well as the increased cost of labor and materials to build houses. She said she has seen the price of some lumber packages increase fourfold from a year ago.

“Where we used to build three houses on average a year, we are finishing one a year, if we are lucky,” said Townsend, 49, who was one of the 400 people statewide who responded to the poll between Dec. 26 and 28.

“Even though I have people who would like to work, I can't put them to work because I can’t get material for a job,” Townsend said.

David Camp, a marketing consultant who lives in Spokane, said he doesn’t think the economy is doing terribly overall, but he is concerned about housing affordability.

The 64-year-old Democrat thinks increasing housing density will help reduce the high costs of housing. To that end, he favors a proposal in the Legislature that would allow duplexes on all residential lots in cities of 10,000 or more.

The Crosscut/Elway Poll found that voters were split on the housing density measure, which would eliminate single-family zoning in mid- to large-sized cities and open the door to building multifamily housing on all of those cities’ residential lots. A majority of poll respondents, 55%, said they opposed the plan, while only 37% said they support it.

Townsend, who identifies as politically independent but tends to vote for Republicans, said she’s not a fan.

“I live out in the country and I want it to stay country,” she said.  “Look at how crowded Seattle is — you can reach your neighbors’ house by putting your arm out the window. You can touch hands. I moved away from that.”

In the 60-day legislative session, which starts Monday, lawmakers will also be discussing a proposal to ban high-capacity magazines for guns. That proposal garnered more support from poll respondents: 54% said they favored it, while 44% opposed it.

Overall, the poll results suggest voters are less enthralled with Democratic leadership at the state level than they were two years ago.

That’s a big shift, Elway said, but it may not be as rosy news for Republicans as it may appear. In swing legislative districts, this year’s poll found that Democrats still have a substantial advantage, he said.

At the same time, Democratic Gov. Jay Inslee’s job approval ratings are the lowest they have been since he took office in January 2013.

Only 39% of poll respondents this year rated Inslee’s performance as “excellent,” or “good,” while 60% said he was doing an “only fair” or “poor” job.

Elway said Inslee’s current approval ratings “aren’t appreciably different” from the marks his predecessors, Democratic Govs. Chris Gregoire and Gary Locke, received at the end of their second and final terms in office. Inslee is now in his third term as governor.

“People aren't feeling so great about the economy. They’re tired of COVID, they’re tired of the mandates — and he’s been there through all of it,” Elway said. “So I think that’s a large part of it.”

The Crosscut/Elway Poll surveyed voters around the state, with the number of respondents from each geographic region mirroring the state's population distribution.

Voters were contacted by text message and by calls to cellphones, in addition to calls made to landlines.