In new Crosscut/Elway Poll, 31% of respondents named homelessness as the state's top issue, a 10-point increase from 2019. 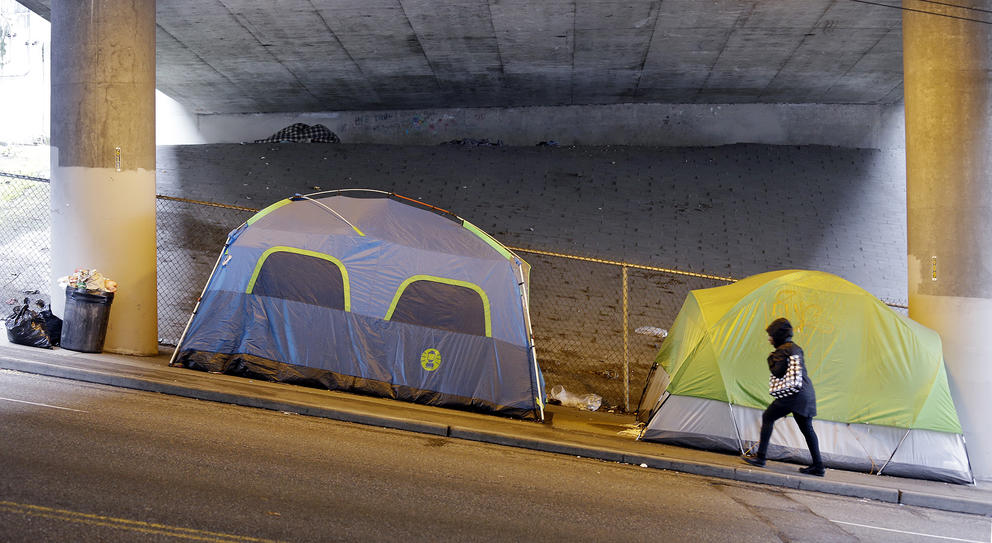 A person walks up a hill next to tents lined up beneath an overpass in downtown Seattle, in 2017. Washington voters ranked homelessness as the top issue facing the state. (Elaine Thompson/AP)

Homelessness is at the forefront of voters’ minds across Washington state, according to a new poll, with nearly one-third of those surveyed saying the issue should be the top priority for the state Legislature this year.

Voters’ concern about homelessness has increased notably since last year, results from the new Crosscut/Elway Poll show. In the survey of 405 registered Washington voters, 31% of respondents identified homelessness as the state’s most pressing issue heading into 2020.

By comparison, in last year’s poll, only 21% of Washington voters called out homelessness as the No. 1 issue facing state legislators.

Survey respondents identified homelessness as the leading priority in response to an open-ended question about what topics state lawmakers should focus on this year. Legislators return to Olympia for a new 60-day session starting Monday.

Pollster Stuart Elway said he found it striking that homelessness was ranked as the top issue among voters in every area of the state — not just in and around Seattle. 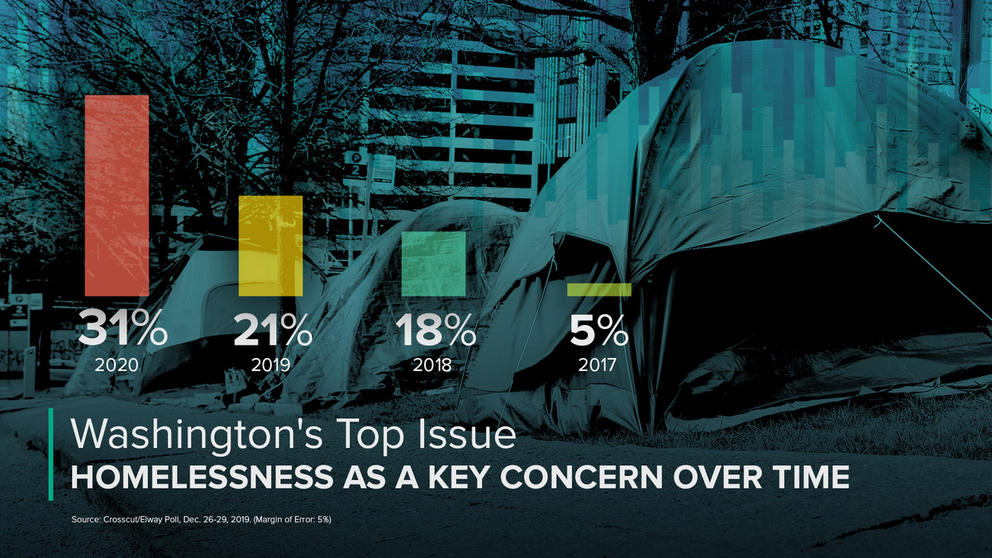 Respondents mentioned homelessness far more often than the second-ranked issue, taxes, which only 16% of those surveyed said should be a focus for the 2020 Legislature.

“It’s everywhere,” Elway said of the concern about homelessness. “Both parties, every region in the state — urban, rural, small town, suburban — everybody names this as their highest priority. It’s not just a Seattle issue,” he said.

That didn’t used to be the case. As recently as 2017, only 5% of voters surveyed across the state said homelessness should be a top issue for state lawmakers.

Poll respondent Anita Russum, who lives in Vancouver, Clark County, said she identified homelessness as a leading issue this year because, increasingly, she is seeing its effects in her community.

Russum, who identifies as an independent, said she knows a number of people who are working, yet still living out of their cars with their families. She thinks that is a sign of a housing market desperately in need of regulation from the state level.

Other issues used to dominate. From 2009 to 2014, poll respondents ranked economic issues as the most important ones facing state legislators. This year, only 15% did so.

Similarly, education topped the list of Washington voters’ concerns from 2015 to 2018, when the state was under a court order to fix how it pays for public schools. This year, education dropped to the sixth most important issue on voters’ radar, following several years of legislators increasing state funding for K-12 schools.

Although homelessness rose to the top of voters’ list of priorities, poll respondents were divided on how best to address the issue. Fifty percent of the respondents said they support Gov. Jay Inslee’s idea of using $319 million from the state’s emergency fund to pay for rental assistance, shelter beds and other services designed to help the homeless. However, almost as many — 44% — said they oppose Inslee’s plan to dip into the state’s rainy day fund.

A clearer majority of poll respondents said they think state lawmakers should find new ways of raising revenue to avoid cutting or delaying transportation projects, something legislators have discussed doing in response to Initiative 976. Voters approved the measure, designed to reduce state and local car-tab fees to a flat $30, in November.

While a court challenge has temporarily put the initiative on hold, state leaders say its passage still creates a $478 million hole in the state transportation budget.

Only 26% of voters surveyed in this year’s poll said they thought the Legislature should delay or cut transportation projects in response to I-976. Instead, 58% of the respondents said lawmakers should try to find a new way of raising money for transportation needs.

Voters were also asked to look ahead to the 2020 governor’s race. As things stand today, Inslee, a Democrat seeking a third term, holds a clear advantage: 46% of voters surveyed said they’d vote for him. Anti-tax activist Tim Eyman, who sponsored I-976, was the poll respondents’ next-favored choice: 7% of poll respondents said they would support Eyman as an independent candidate.

The slate of Republican candidates fared slightly worse, although the difference between their level of support and Eyman’s fell within the poll’s margin of error. Joshua Freed, a former mayor of Bothell, would be the choice of 5% of voters, according to the poll. Meanwhile, state Sen. Phil Fortunato and Republic Police Chief Loren Culp each attracted support from 4% of voters surveyed. Thirty-four percent of the people polled said they were undecided in the race. 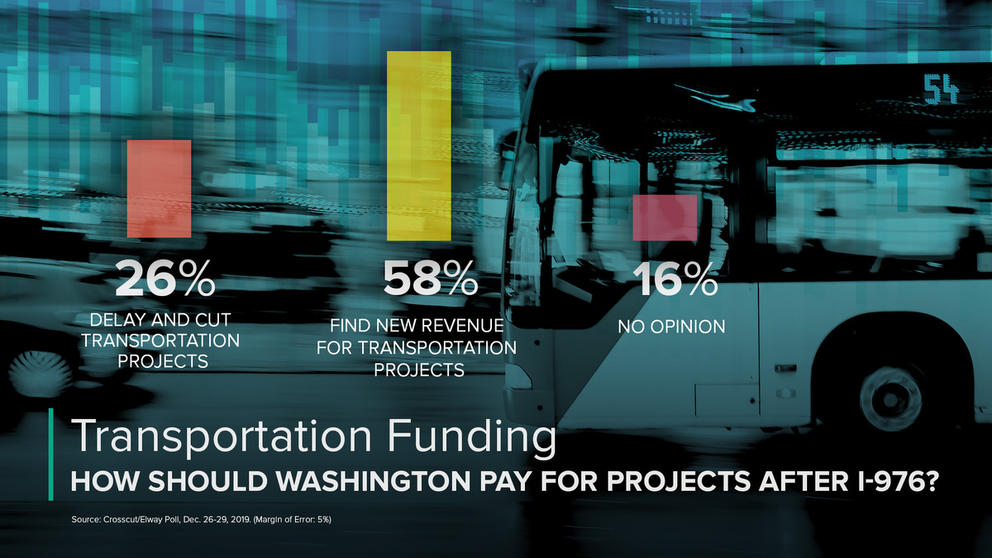 Since the poll was conducted, Eyman has hinted he might not run as an independent after all. This week, the conservative initiative promoter told his supporters via email that he is “seriously considering” running as a Republican instead.

The Crosscut/Elway Poll, which has a margin of error of plus-or-minus 5%, talked to a mix of voters from across the state — not just from King County, but also from Eastern Washington and other parts of Western Washington. The poll, conducted from Dec. 26 to 29, included Republicans, Democrats and independents.

Other findings from the new Crosscut/Elway Poll include:

• A whopping 84% of respondents said they support strengthening consumer protections for personal online data. State lawmakers will consider a new data-privacy bill this year that aims to accomplish that.

• 66% said they support requiring the producers of gasoline and other fuels to reduce carbon emissions. Inslee and others want to adopt a clean-fuel standard to make that happen.

• 65% said they support regulating or banning high-capacity magazines for guns.

• 56% said they would support requiring public schools to teach comprehensive sex education. Right now, schools in Washington can opt to not teach sex education at all.

• Fewer people said they support lifting a statewide ban on rent control. Only 47% of respondents said they would support changing state law to allow local rent-control measures; 40% said they were opposed.

Remembering the Wobblies, the labor union radicals of the early 1900s

In a new novel by Jess Walter, the personal and the political collide during a historic, and still relevant, labor battle in Spokane.

by / December 31
Inside Crosscut

Survey: What WA issues should Crosscut cover in 2021?

We want to make sure our Northwest, nonprofit news is benefiting you in 2021.

The congresswoman from Washington state details a harrowing day at the Capitol and how the House will move forward on the pandemic, infrastructure and climate.