Diaz, who has been acting as interim chief since 2020, was appointed by Mayor Bruce Harrell to fill the role permanently. 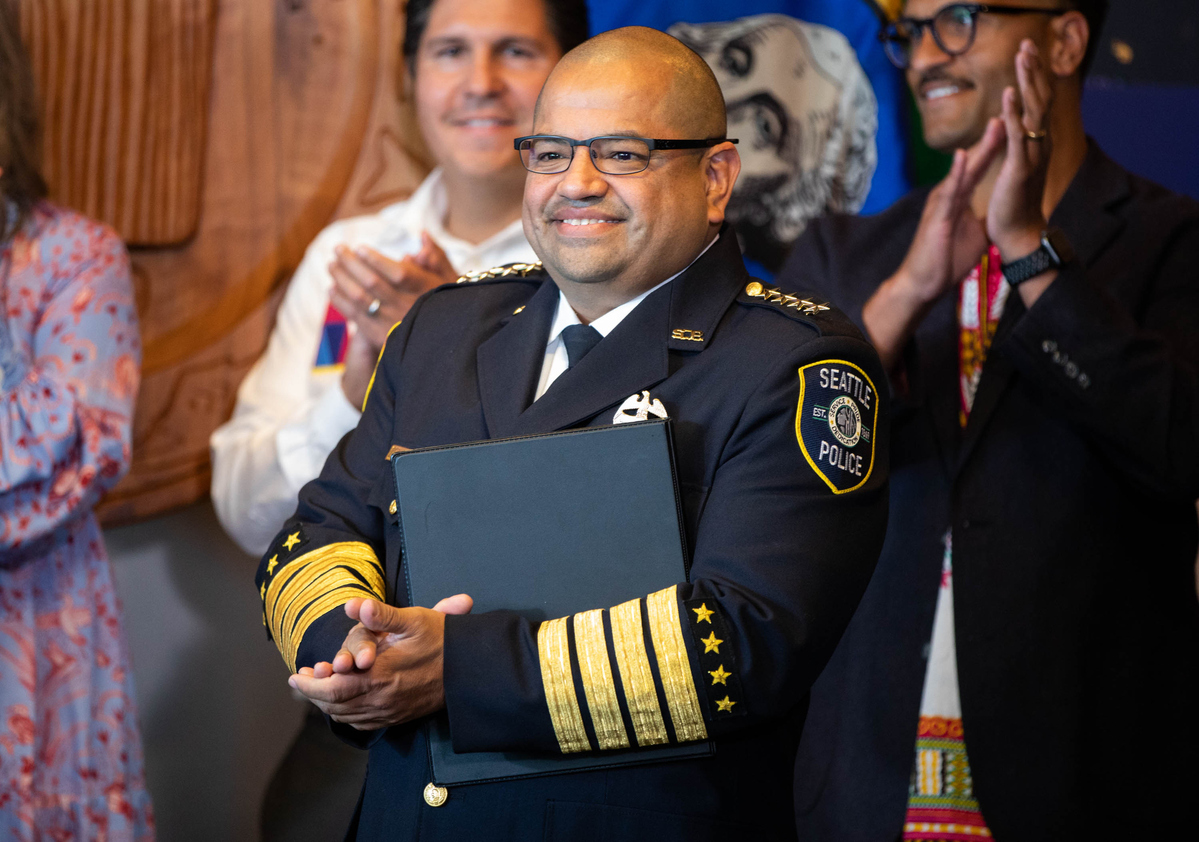 Interim Police Chief Adrian Diaz is nominated to be the permanent chief at a press conference in City Hall Tuesday. (Amanda Snyder/Crosscut)

If the Seattle City Council confirms Adrian Diaz as the next chief of police, he will assume leadership in a city still divided on police reform, two years after the murder of George Floyd.

In some corners, there’s been a backlash to the 2020 protests and talk of reform, drawing calls for more arrests and prosecutions in response to street homelessness, mental health and addiction crises and a rise in property crime and violence. Members of the defund-the-police movement have expressed disappointment in the limited steps city officials have taken to redirect SPD’s budget to community services. The department has been under federal oversight for more than a decade because of officers’ excessive use of force.

Diaz has led the department as interim police chief for two years. He stepped in after his predecessor Carmen Best resigned in the face of City Council plans to reduce the police department budget in summer 2020.

On Sept. 20, Seattle Mayor Bruce Harrell announced Diaz, a 25-year veteran of the Seattle Police Department, as his pick to fill the role permanently.

Crosscut asked community leaders and stakeholders what they think of Harrell’s choice of Diaz and what they hope to see from his continued leadership of the Seattle police.

Sean Goode, executive director of the youth diversion nonprofit Choose 180, said he’s seen Diaz serve the community faithfully for more than two decades, and said he is excited about what the appointment means for Diaz, his family and the broader community.

“While the practice of policing is imperfect and does cause harm, I believe Adrian has demonstrated historically an investment in alternatives to policing and has always been open and willing to engage in honest dialogue about the impact SPD has had on those disproportionately contacted and negatively impacted by policing,” Goode wrote in an email. “I hope that now this decision has been made we can begin the real work of creating One Seattle, a Seattle that isn't reliant on policing to keep us safe but instead a commitment to resourcing community-based alternatives and the assurance that every resident has access to housing, healthcare and basic income needed to survive.”

In an emailed statement, the Downtown Seattle Association said it is hopeful Diaz will continue aiding in downtown recovery: “His long tenure with SPD positions Adrian Diaz well to assume the role of Seattle Police Chief. He is familiar with the challenges we’re facing downtown, including public safety, and has demonstrated leadership over the past two years in addressing these issues. Chief Diaz understands well the relationship between community safety and downtown’s ability to fully recover.” 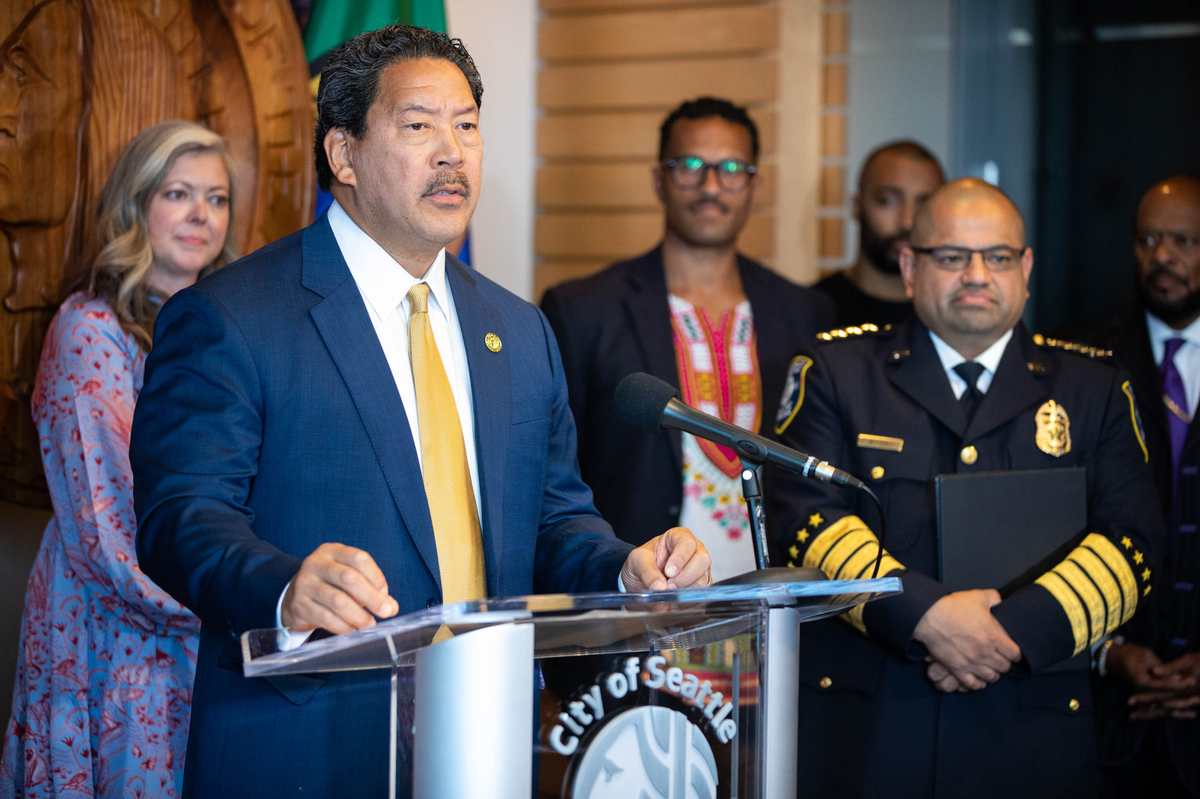 Quynh Pham, executive director of Friends of Little Saigon, said she built a relationship with Diaz during concerted police crackdowns downtown and at 12th Avenue South and South Jackson Street in Little Saigon earlier this year. “He’s been pretty attentive to our needs and concerns and very accessible to the community,” said Pham.

Though the targeted campaign this spring helped “break up the pattern of criminal activity” in the neighborhood, explained Pham, it hasn’t led to sustained change. She said a lot of the problems have just relocated to other corners in the neighborhood, and now that Diaz is on his way to becoming the permanent police chief, Pham wants to hear the strategies he plans to deploy in the community.

“We’re in a place where we support reinvesting dollars and prioritizing alternatives to policing,” said Pham. “But we also acknowledge we need to work with our Seattle Police Department and other authorities like that.”

At Tuesday’s press conference, Harrell said he wants Diaz to focus on crime and gun violence, police accountability and alternative 911 responses, and, broadly, making sure every neighborhood in the city is safe. Underlying all of that, Harrell said, is the need to recruit and retain more officers to replace the nearly 400 who have quit since January 2020.

“Our police officers have spent the last couple years serving our community despite exceptionally challenging circumstances,” said Harrell. “We are committed to supporting them and retaining them, and, quite candidly, chief Diaz is the right one for that job.”

Diaz said he hopes to rebuild trust in the community and bolster morale among his officers. “I approach this work with optimism, mindful of the trust that was shattered by the events of 2020 following the murder of George Floyd; the combined trauma of the community and our officers alike and the long path of reconciliation ahead of us,” he said on Tuesday.

He pointed to several policies he’s implementing to try to improve community/police relationships and move some crisis-response work away from the department.

Beyond the Badge is a new training program for police recruits that requires officers to meet with community members in the neighborhoods they’ll patrol and learn techniques to more effectively cope with the stresses of the job. Diaz also said he’s interested in expanding the 911 co-responder program that sends mental health professionals along with officers for certain behavioral health crisis responses.

Now that Harrell has named his final pick for chief of police, the City Council must vote on whether or not to confirm Diaz’s nomination, as they would with any department head appointed by the mayor.

Crosscut has reached out to additional community leaders and stakeholders and will update this article with their reactions as they respond.