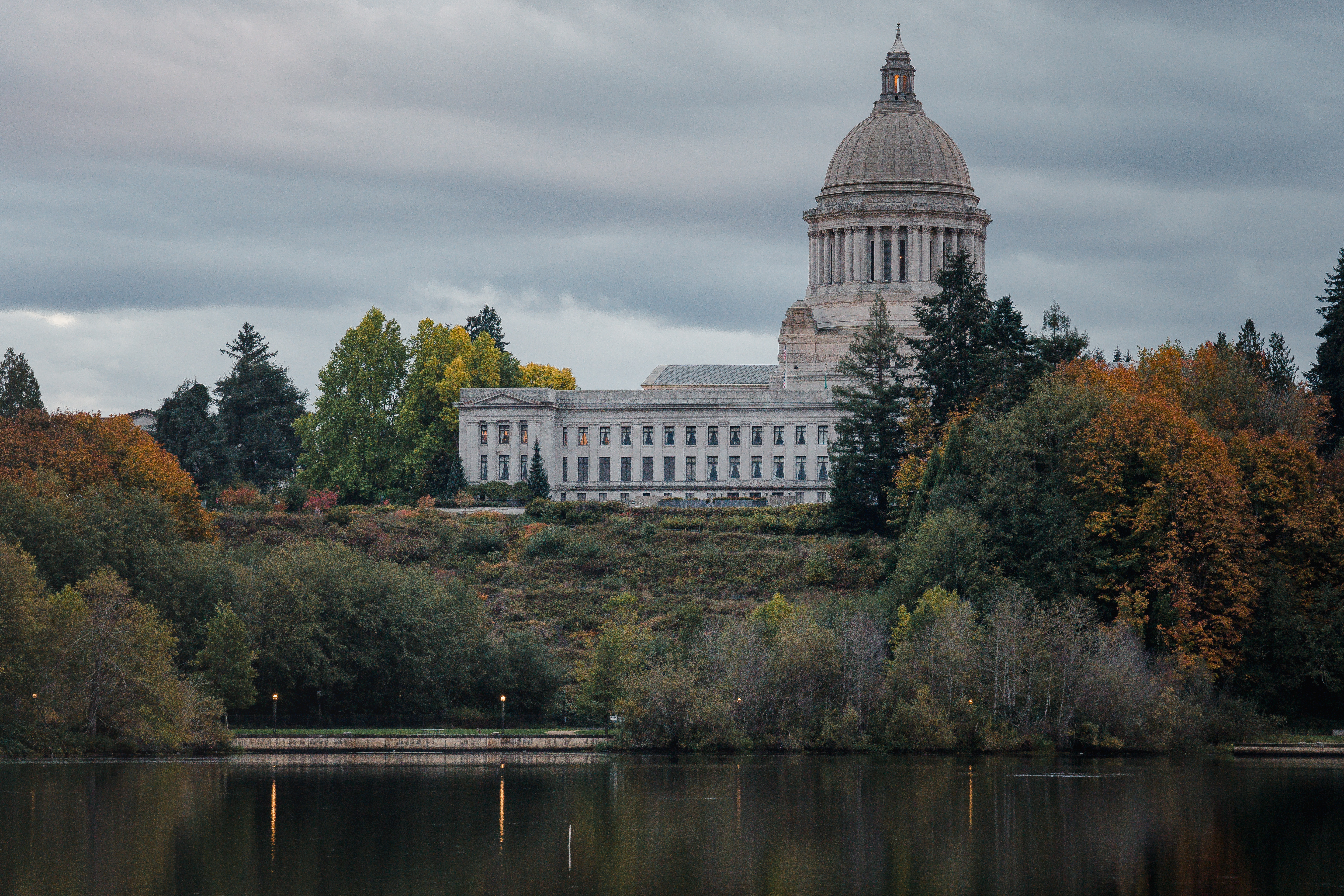 As Washington lawmakers get ready to return to Olympia Monday, the economy remains top of mind for residents, according to a new Crosscut/Elway poll.

Just over a third of the 403 Washington registered voters polled said economic issues – including housing costs and price inflation – should be a main focus.

About 23% of respondents cited public safety – with responses ranging from crime and drug use to firearms laws – as a main issue.

Meanwhile, 22% of those polled said addressing homelessness should be a main priority. In an interview, pollster Stuart Elway said that issue’s prominence continues as Washington’s long-running homelessness and affordable-housing crises grind on.

“People just want something done about it … they're not exactly sure how to do it, “ Elway said. “But anybody that looks like they're going to address the issue, they'll have some support.”

The Crosscut/Elway Poll has a 5% margin of error at the 95% confidence level, meaning if the survey were conducted 100 times, the results would be inside five percentage points of the results reported here at least 95 times.

Conducted in late December, the poll reflects two years of economic crosswinds and also marks the drop of COVID-19 from the minds of many. Asked the same open-ended legislative priority question in a poll two years ago, just before vaccines for the virus became widely available, 53% of those surveyed cited COVID-19 as a top concern for legislators to tackle. In last January’s poll, the number had dropped to 23%.

In this newest poll, only 2% of those polled said COVID-19 was a main issue legislators should focus on.

The poll arrives as the Legislature is scheduled to begin, and as lawmakers and Gov. Jay Inslee move to draft a new two-year state operating budget.

On Thursday morning, Inslee, legislative leaders, lawmakers who draft the budget and Elway are all scheduled to speak in an annual legislative preview for journalists and the public. That starts at 8:30 a.m. and can be streamed on TVW, the public affairs channel.

Inslee last month released his proposed two-year budget, which would spend $70 billion and use $6 billion in higher state tax and fee collections to boost government spending. That document would distribute dollars to schools, parks, prisons, and the mental health and foster care systems, among other government programs.

A majority of those polled – 55% – said they support using those existing tax dollars to boost government spending. Another 22% want to see the roughly $6 billion increase returned to residents as tax cuts. Meanwhile, 12% of those polled support keeping that $6 billion in reserves, rather than spending it. 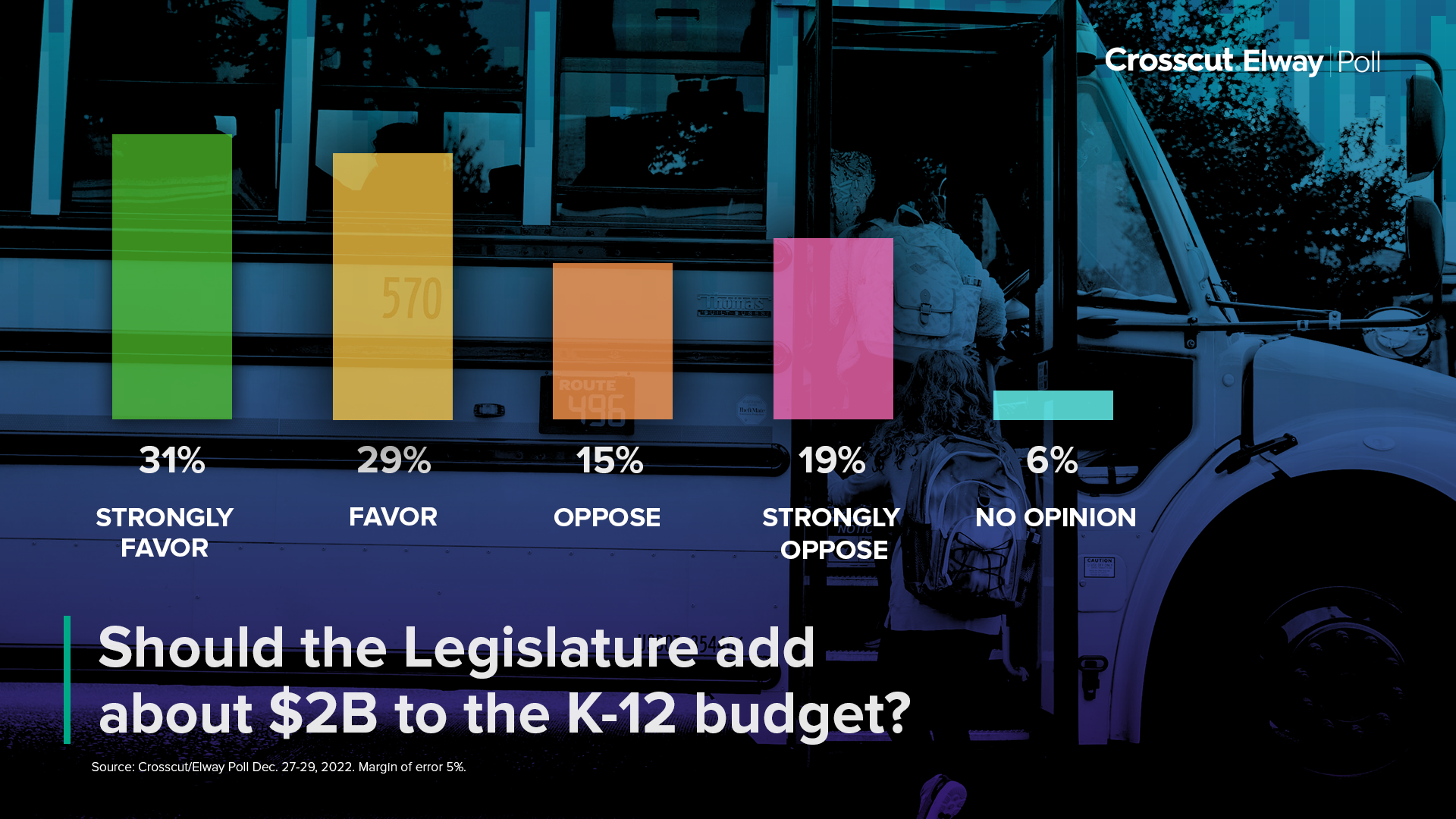 As expected, opinions on these issues were split along party lines, with 72% of Democrats wanting to spend the tax increase to pay for programs, versus 40% of Republicans and 45% of people who identified themselves as independents.

As part of his budget proposal, Inslee is asking the Legislature to send an ambitious new package to address homelessness and the scarcity of affordable housing. If that gets to the November ballot and voters approve it, the state could raise $4 billion above the official debt limit over the next six years by issuing bonds to boost housing construction and cut homelessness.

Asked about the proposal, 52% of those polled said they support it, while 42% oppose it and another 5% have no opinion. The proposal is more popular in central Puget Sound than elsewhere in the state, but the differences were more dramatic between Democrats, who are 80% in favor, versus Republicans, who are 78% opposed to the idea.

“These numbers you would expect to be change, be fluid, as more details come” out on the proposal, said Elway. 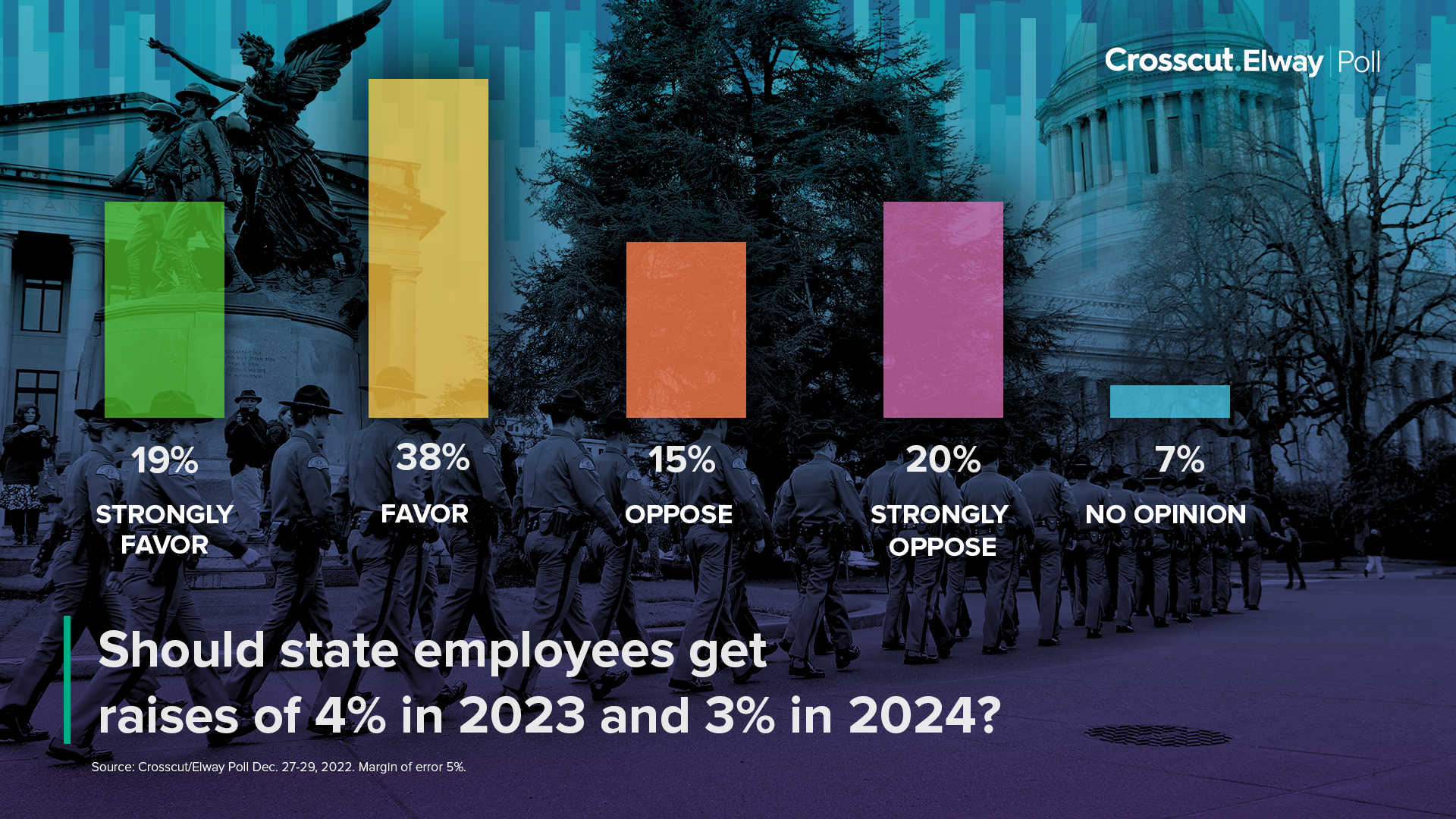 Jeremy Best, a mechanic who lives in Rock Island, Douglas County, told the Crosscut/Elway Poll that he was wary in general of more government spending. Best is not a supporter of Inslee, he said, but he’d consider voting for the bond package if it focused on addressing homelessness.

“For the homeless, yea, and low-income to a point,” said Best, 49, who added that he worried too many people in society weren’t working enough.

The new poll also shows robust support for legislation banning the sale or transfer of most semiautomatic rifles, a proposal that has been around in one form or the other in Olympia for years. This year’s proposal is being supported by both Inslee and state Attorney General Bob Ferguson.

“Probably the most polarizing thing in the poll,” said Elway. But the ban received a majority of support on both sides of the mountains. 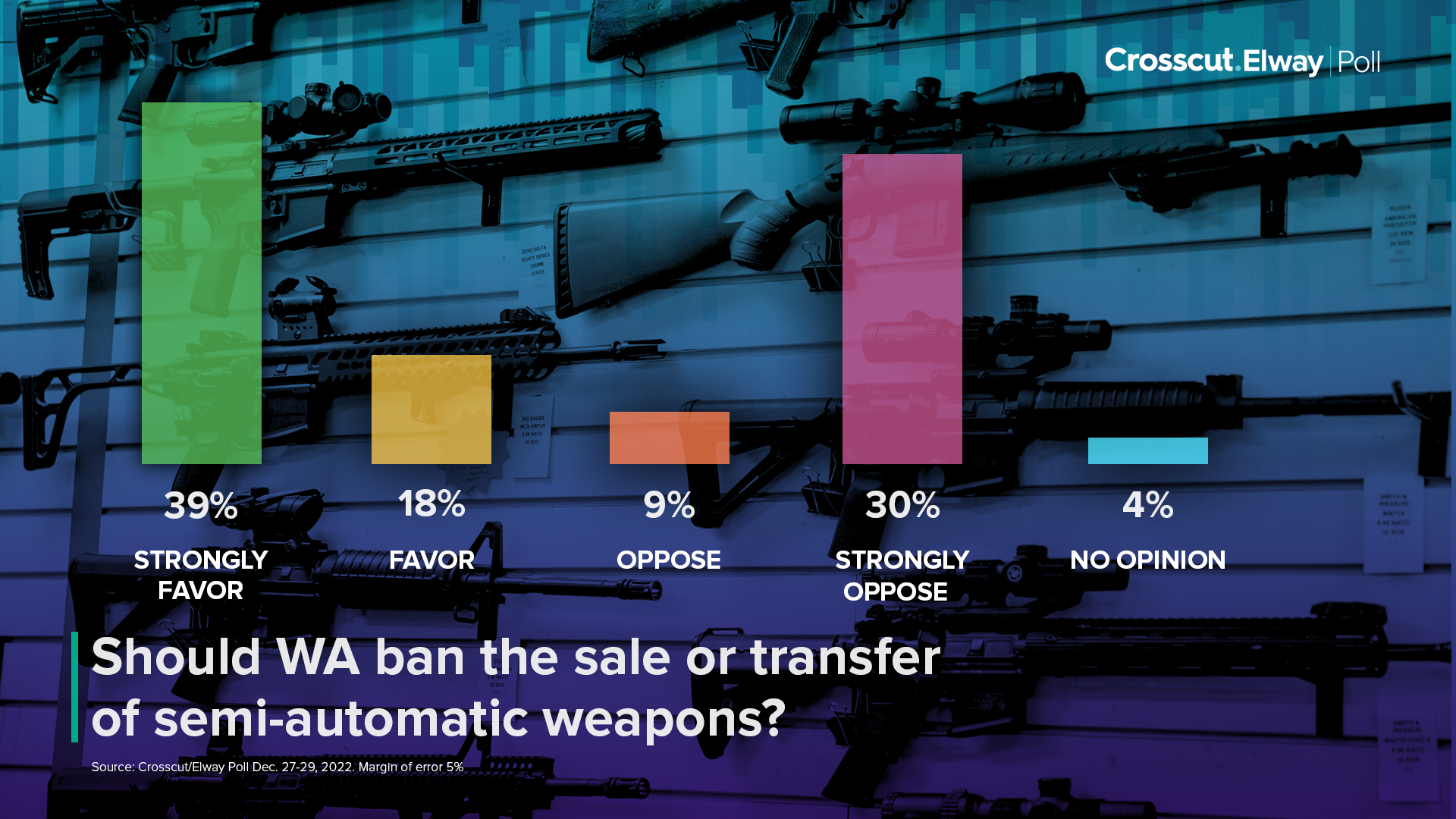 In other areas of public safety, lawmakers and Inslee must decide how the law handles both possession of narcotics and substance-abuse treatment in the wake of the state Supreme Court’s ruling that overturned Washington’s felony possession law.

Law enforcement officials and Republicans – who are in the minority in the state House and Senate – are also expected to continue a push to loosen a recent law restricting vehicle pursuits that they contend has hampered officers.

One question that those polled responded negatively to: the Inslee administration’s push to ban the sale of new gasoline-powered cars in Washington by 2035.

Fifty-four percent of those polled oppose that measure, with 35% strongly against it. Another 40% agree with the plan, with 16% strongly favoring it. Support is clustered around high-density areas like central Puget Sound, Elway said, and drops off in other areas.

“The more people you lived around … the more you were in favor of it,” he said.