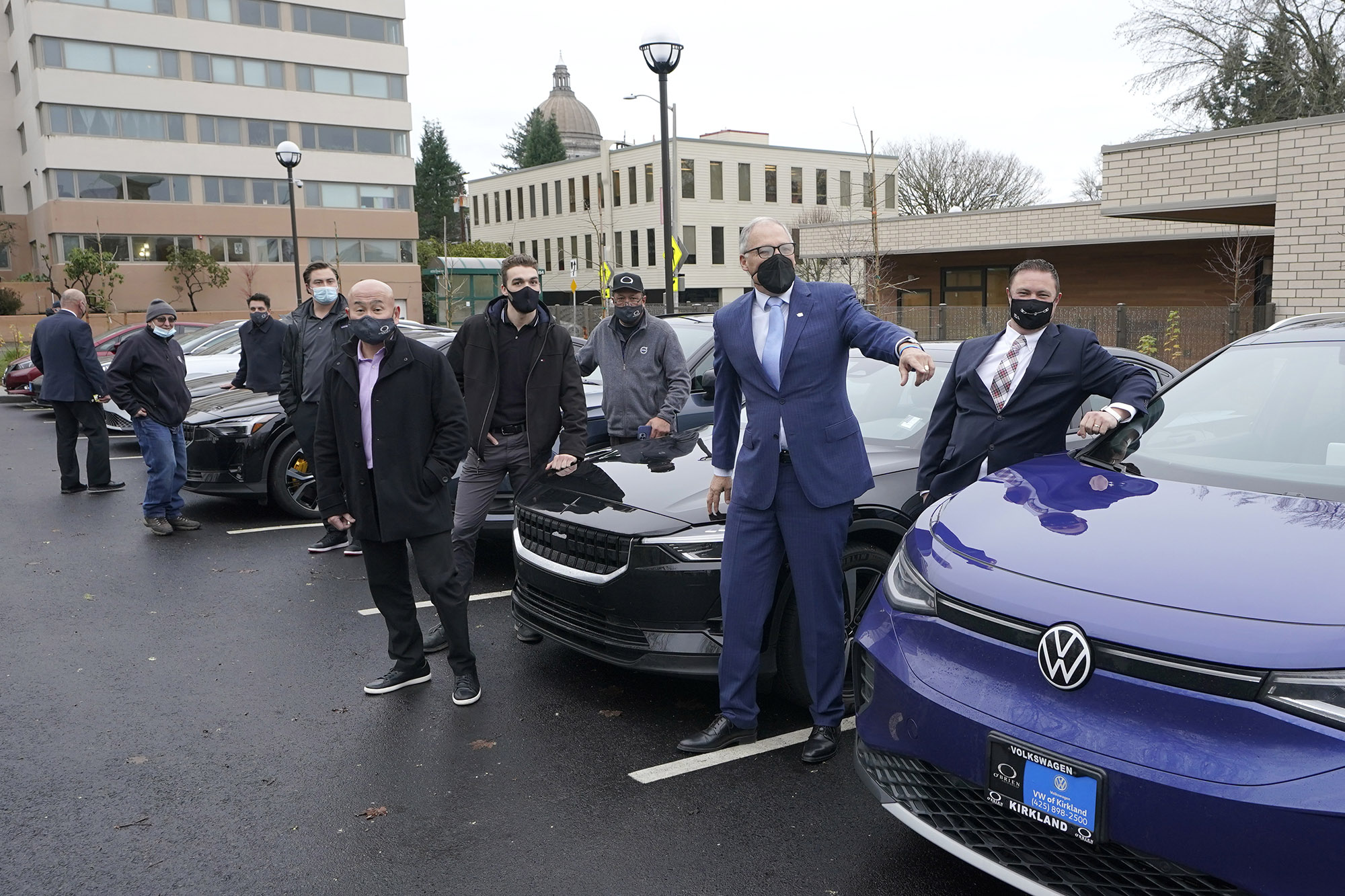 Washington Gov. Jay Inslee, second from right, posed for a photo, Monday, Dec. 13, 2021, with car dealership representatives who drove electric vehicles to a news conference in Olympia. Inslee has committed to a goal of no new gas-powered cars being sold in Washington by 2035. (AP Photo/Ted S. Warren)

If Washington state extended no further east than the Cascades, Gov. Jay Inslee’s goal of no new gas-powered cars being sold here by 2035 would seem ambitious but relatively doable.

As of mid-October, King County was home to 56,252 electric vehicles, followed by Snohomish County at 11,972 and Pierce County at 8,357. Thurston, Kitsap and Whatcom counties follow closely behind, according to data from the Washington Department of Transportation.

But Washington does not end at the Cascade Range. East of the mountains, Spokane County has the most electric vehicles at 2,778, followed by Benton County at 1,347.

And electric car adoption is only the beginning of this evolution. For the state’s drivers to fully make the switch to alternative fuels, they will also need to be able to charge those cars, trucks and SUVs. Washington has a ways to go in that as well. Can the state hit Inslee’s target, announced Aug. 24, of no gas-powered cars being sold in Washington by 2035? Does the state government even know what has to be done between now and then? When will it have a plan to accomplish this?

The answers are still very much up in the air. The planning is in its infancy. No one will know much for a while.

“Electric vehicles are the key technology to decarbonise road transport, a sector that accounts for 16% of global emissions. Recent years have seen exponential growth in the sale of electric vehicles together with improved range, wider model availability and increased performance,” said a September 2022 International Energy Agency report. The IEA is a coalition of 31 nations including the U.S. 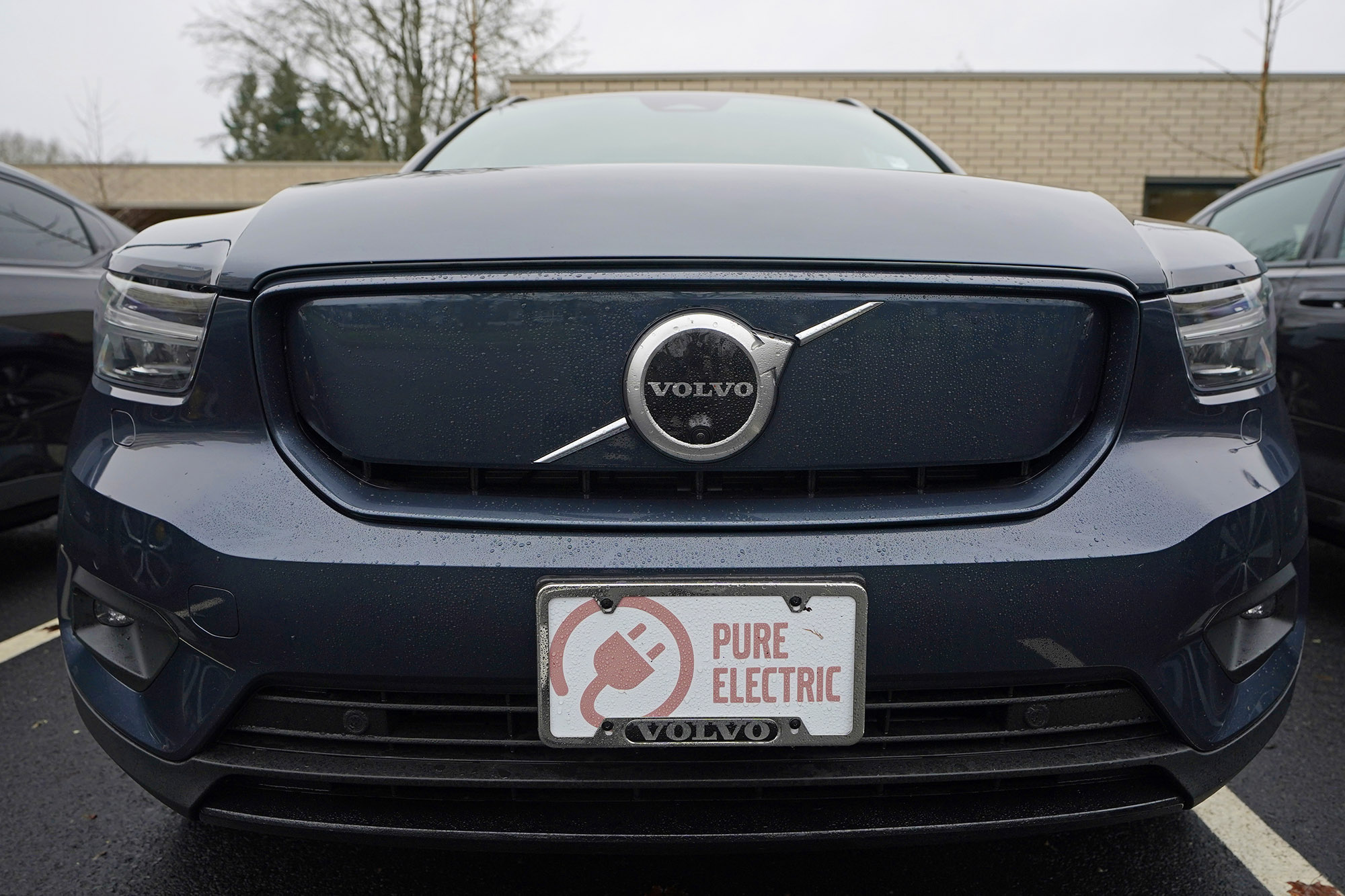 In broad terms, Washington has two targets regarding gas-powered cars. During its 2022 session, the Legislature set a target of 2030 to theoretically encourage all state residents to wean themselves from gas-powered vehicles. This is not a mandate but a goal, said Anna Lising, Inslee’s senior climate policy adviser.

The other target is Inslee’s mandate. “This is a critical milestone in our climate fight. … We’re ready to adopt California’s regs by the end of this year,“ Inslee tweeted at that time.

A broad spectrum of opinions greeted the governor’s announcement.

“If you don’t have a goal out there, you don’t have the sense of urgency that it needs,” said Rep. Jake Fey, D-Tacoma, chairman of the House Transportation Committee.

Sen. Curtis King, R-Yakima, ranking minority member of the Senate Transportation Committee, said Inslee and the state government cannot predict how electric vehicle use will evolve through 2035 to intelligently apply a mandate. “I don’t think it’s reasonable. I don’t think it is necessarily rational. I don’t see how you can foresee all of the challenges of that sort of mandate,” King said. 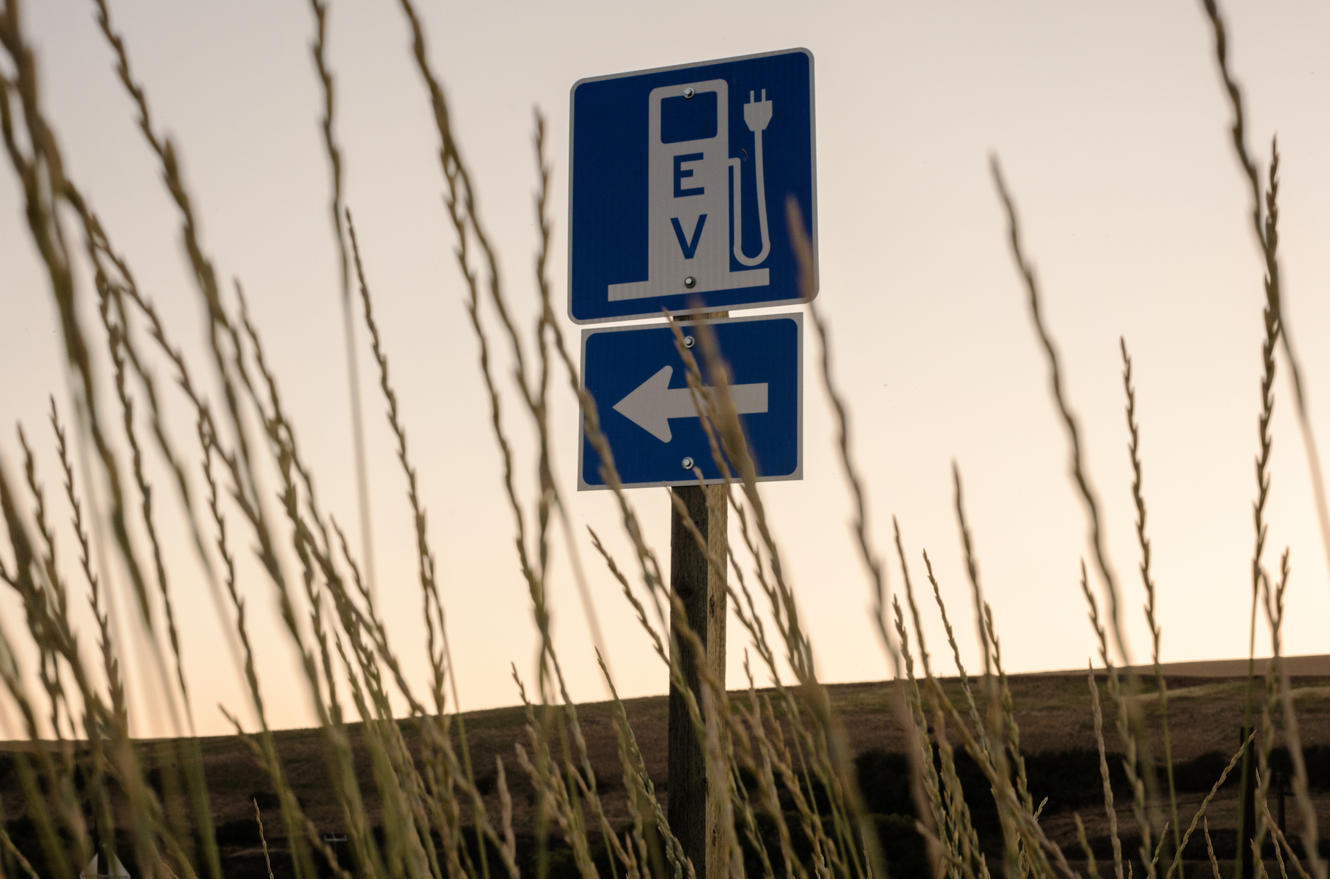 The state government does not know how many new charging stations and what types of new chargers will be needed by 2035. Sources of electricity and the electric grid to deliver that power still have to be built out to address the expected increase in power needed. The cost for this project is largely unknown. An electric-vehicle council of 10 state agencies has been set up to take over this planning, but is still getting organized.

A study to tackle these questions is in the works, but is not scheduled to be delivered to the Legislature until December 2023, said Lising and Tonia Buell, program manager for the alternative-fuels program at the Washington Department of Transportation.

At least three types of auto chargers must be considered in any plan – at homes, at workplaces and for travelers along highways.

The federal government will take care of charging stations on interstate highways. Ideally, stations of at least four chargers each should be located every 50 miles along the state’s highways, Buell said. She noted that the states’ highways weave into remote corners of Washington — places like Twisp, Goldendale, Republic and Walla Walla.

Rural Eastern Washington will find the 2035 target challenging due to its very small numbers of electric cars and charging stations.

Washington has roughly 2.8 million registered cars, the 11th-highest number in the nation. The state had roughly 109,000 electric vehicles in mid-October, according to the Washington Department of Licensing  — the fourth highest number in the nation behind California, Texas and Florida, according to the U.S. Department of Energy.

Buell noted that people are anxious about being caught in rural areas without chargers. The ranges of the 10 least-expensive electric cars vary from 100 to 275 miles, according to Car & Driver magazine’s website. Meanwhile, businesses are reluctant to install charging stations in rural areas with few electric car customers, Buell said.

“We’re in a chicken and the egg situation, and we need more chickens and eggs,” Buell said.

Buell, Lising, Liias and Fey acknowledged that the marketplace will be a factor in whether Washington achieves its 2035 goal.

“Passenger electric cars are surging in popularity. The IEA estimates that 13% of new cars sold in 2022 will be electric. … However, electric vehicles are not yet a global phenomenon,” the IEA report said. Electric car sales reached a record high in 2021, despite supply chain bottlenecks and the ongoing pandemic. Compared with 2020, sales nearly doubled to 6.6 million (a sales share of nearly 9%) in 2021, bringing the total number of electric cars on the road to 16.5 million, according to the report.

“We’ve seen the price of electric vehicles drop precipitously,” Lising said. To meet the goal of having fewer gas-powered vehicles on the road, those prices need to shrink to levels to where lower-income people can afford them, Fey said.

In the spring 2022 session, the Washington Legislature appropriated $69 million to set up charging stations and other infrastructure in spots where they are clearly needed. Even though the formal report on the state’s electric vehicle needs and financial estimates for building out the system is not due until December 2023, legislative leaders expect bits and pieces of this issue to come to light in the 2023 session that begins in January.

King said hybrid electric-and-gas vehicles have been ignored by the Legislature, arguing that this topic should be addressed in the 2023 session. Liias and Fey said some preliminary ground work could be tackled in 2023 while waiting for the December 2023 report. Meanwhile, King worried that a push for new charging stations will take money from maintenance of highways and bridges.

Another issue that needs to be looked at is whether Washington has enough electricity to power the vast number of new charging stations envisioned to be in place by 2035, Fey and King said. “We’ve got to make sure the grid is set up properly,” Fey said.

King added that the manufacture and disposal of electric cars’ batteries needs to be studied. The state needs to look at the carbon footprint of mining lithium for car batteries and of manufacturing them, as well as figuring out locations and protocols for burying old batteries, he said.

”Those are elements that no one wants to talk about,” King said.

Correction: An earlier version of this article misidentified the program manager for the alternative-fuels program at the Washington Department of Transportation. The story has been corrected. 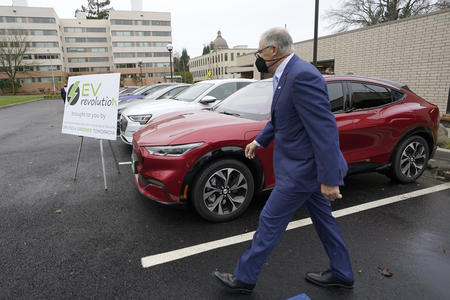