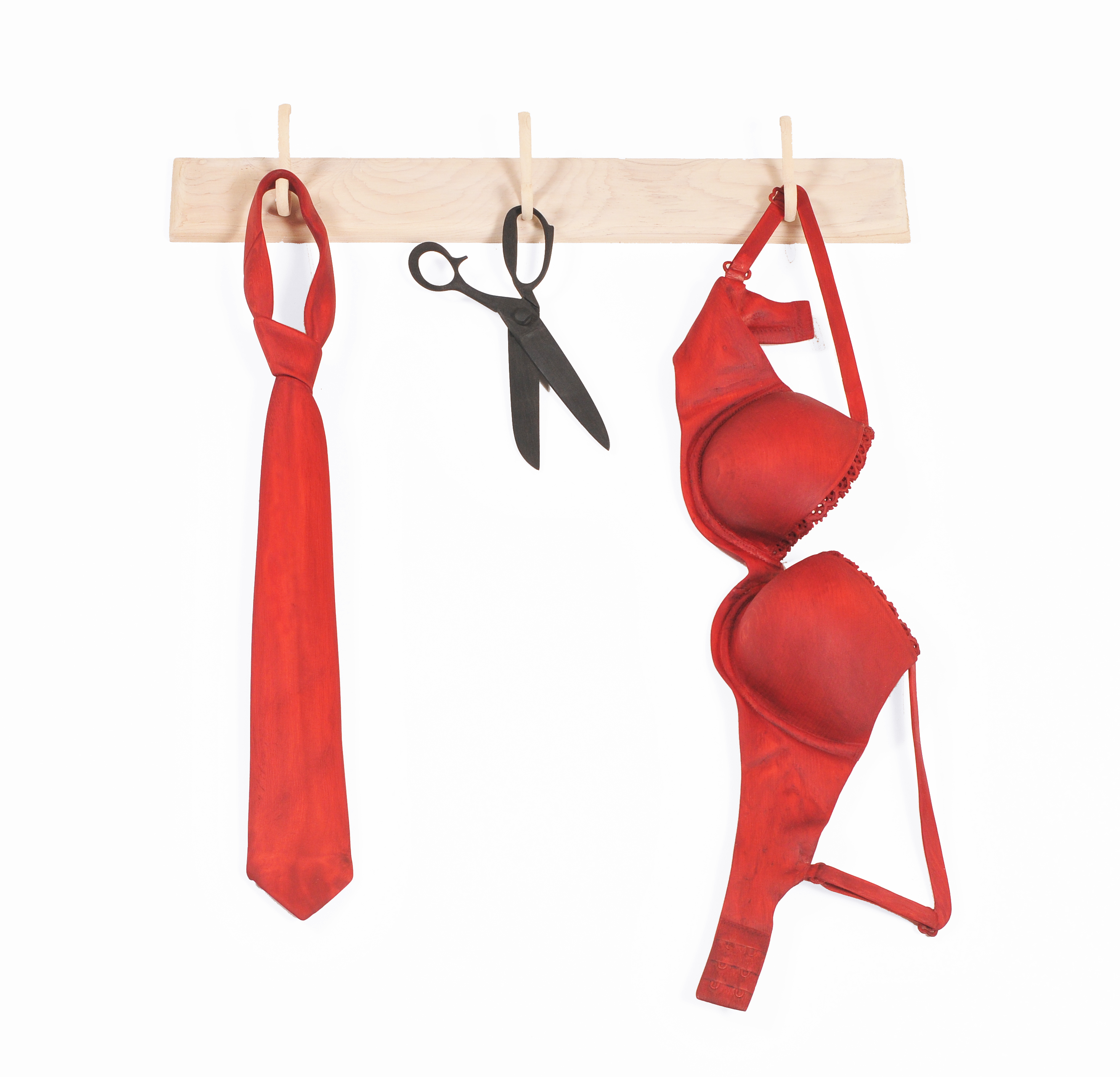 If you caught this Pakistani-American artist’s brilliant, poignant, provocative show, “Searching for Home,” at Bellevue Arts Museum, you’ll want to see more of her work. “My Shame” at ArtXchange (the Seattle gallery that gave Abid her local start) delivers plenty more as Abid delves deeper into “the stigma that women feel over natural, social and cultural issues.” Abid, for those unfamiliar with her, is an illusionist in wood. That bright red bra limply hanging from a coat-hook? Those balloons floating toward the ceiling? They’re meticulously carved from pinewood and painted to resemble the real thing. Even after years of looking closely at Abid’s work, I can still be fooled by her. “My Shame - I” seems to be an upholstered dining-room chair with a small blood stain on its cushion.  But its upholstery isn’t upholstery; it’s created from bleached pine wood and red stain. Abid also draws expertly on Mughal miniature tradition in her “Tempting Eyes” series, in which her carved replicas of car rearview mirrors (complete with female drivers’ reflections) deliver some wry feminist commentary.

Our relationship to birds is different than our relationship to other parts of the animal kingdom. We pass by them every day, only occasionally pausing to appreciate that they are natural musicians and and connectors to the vast world above us. It is no wonder that birds have been an inspiration for creators over time, poets among them. In this Katz Distinguished Lecture in the Humanities, UW Professor and Chair of English Brian Reed explores the relationship between birds and poets, from Wordsworth to Dickinson to the present.

Slovenia, an oft-overlooked Central European nation, can boast of a unique cuisine, combining influences from its Mediterranean, Balkan and landlocked European neighbors. Someday I hope to attend their annual Festival of Roasted Potatoes, but in the meantime, Pioneer Square’s’ Delicatus is bringing Slovenia to Seattle. This special four-course dinner includes braised beef goulash, Pacific sardine with black risotto, and roasted pork tenderloin with savory potica, a traditional and proudly Slovenian nut roll pastry. This dinner is a wonderful deal and fittingly popular, so make reservations now!

Since his days at Garfield High School, Evan Flory-Barnes has been creating music and relationships across the Seattle music scene, performing and composing soul, experimental free improvisation and beyond. He’s also the bassist of The Stranger’s Genius Award-winning and genre defying group “Industrial Revelation.” In this special performance, titled “Loving the Muse and Family,” Flory-Barnes brings to the stage “an extended family” of musicians and performers, from The True Loves to the Seattle Girls Choir. The show’s format draws inspiration from late-night variety shows (think The Nat King Cole show) as it mixes performances with personal storytelling. This is sure to be a unique show capturing the heart, connection, and talent that Flory-Barnes has been known for throughout Seattle. Check out this Crosscut article for a more in-depth look at his musical memoir.

Sensory deprivation yields strangely revealing results in Sangjun Yoo’s sound installation at Jack Straw New Media Gallery. Its dark room resembles a sterile hotel room, with two walls of black vertical blinds seemingly obscuring picture-window vistas. Then the blinds start to move. They’re triggered in time with snippets of live-feed radio broadcasts: fleeting bursts of music, fragments of news broadcasts, weather forecasts (“…cloudy again…”) and ads (“…in a single cosmetic procedure…”). With each sound outburst, the blinds shudder and light fleetingly leaks out, as if some swift ghost were passing behind them. With “blind film,” Yoo — a Ph.D student at the University of Washington’s DXARTS program — has created a “digitally-controlled kinetic system” that captures the essence of the media-haunted reality we inhabit.

Comedian and writer Patton Oswalt usually comes to Seattle once a year, whether it’s to read from a book or to perform a new goofy, yet politically cutting stand-up set. This wednesday appearance, however, is different. Patton will share the work of his late wife Michelle McNamara, who died unexpectedly in 2016. Michelle was the author of the website, “True Crime Diary” and her research culminated in the book, “I’ll Be Gone in the Dark: One Woman’s Obsessive Search for the Golden State Killer,” which explores the unsolved murders and sexual assaults of dozens of women between 1976 and 1986. According to Stephen King, “What readers need to know — what makes this book so special — is that it deals with two obsessions, one light and one dark. The Golden State Killer is the dark half; Michelle McNamara is the light half. It's a journey into two minds, one sick and disordered, the other intelligent and determined. I loved this book."

Do you love dancing? Perhaps you’re interested in being an extra in a short film and helping out a local filmmaker? A real-deal SAG-registered short film won't happen without a good crowd of extras for the opening club dance scene (based in Europe)! If you’re between the age of 21 and 55, dress up in chic evening fancy attire and head to The Crocodile to dance, eat catered food, get an IMDB credit and make new friends. This special dance party is for filmmaker, photographer, blogger and well-known bus driver Nathan Vass' 9th film! The only skill level required is that you enjoy dancing — and not all dances are documented with $20,000 cameras like this one. Take the afternoon off and go to Belltown for some de-stressing via dance!

One to mark on your calendar:

Made in Seattle: Kim Lusk – “A Dance for Dark Horses”

The work of Seattle choreographer Kim Lusk has a beguilingly quirky wit and a deep rhythmic zest. For her new piece, Lusk also has three gifted collaborators — Alexander Pham (Spectrum Dance Theater), Erin McCarthy and Shane Donohue — happy to hit absurd notes as they rigorously enact her offbeat vision. “A Dance for Dark Horses,” Lusk explained at a press preview last month, aims at “celebrating the underdogs of the world.” With its march steps, Rockette-high kicks, body ripples and percussive stomps, this dance quartet explores continually morphing odd-man-out/odd-woman-out dynamics. Lusk says she’s striving for a kind of “deadpan warmth” with her blend of tongue-in-cheek regimentation and atomized Broadway-show maneuvers. Judging from this sneak peek, she’s going to pull it off.