The new Seattle is missing the ‘nice’ 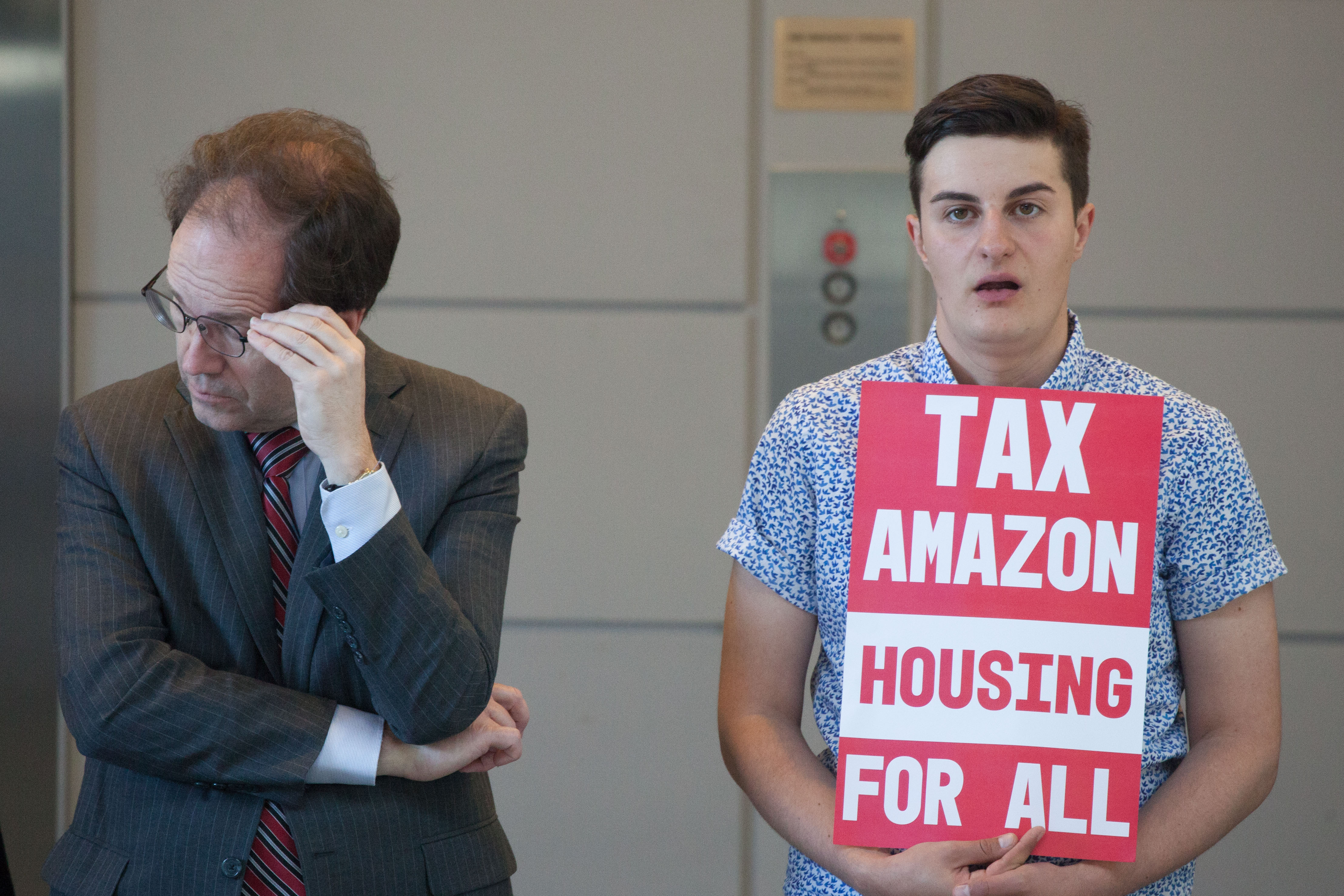 People stand in line waiting to enter city council chambers prior to the employee head tax vote at Seattle City Hall on May 14, 2018. (Photo by Matt M. McKnight/Crosscut)

I wrote a while ago that Seattle Nice was becoming a thing of the past.

For those who hate consensus or “Seattle Way” politics as usual, this last couple of weeks should be a kind of relief: confrontation, threats, manhandling and the slipping of civil masks.

There were the usual Kshama Sawant-led demonstrations to tax Amazon. Ironworkers and others counter-protested. A public meeting overflowed with invective. A city council member was 86’d from a Nordic Museum opening after-party in Ballard. In the wake of a vote on a compromise tax this week, neither Starbucks nor Amazon were appeased.

An Amazon spokesman said they were “very apprehensive about the future created by the council’s hostile approach and rhetoric toward larger businesses.” Starbucks claimed the city was spending money without accountability or without solving the homelessness crisis.

Seattle loves its corporate giants. We rooted for Microsoft despite anti-trust problems. We cheered for Boeing despite bribery scandals and extortionate threats. We loved Washington Mutual — “the friend of the family” — yet were the last to see its epic collapse coming. We’ve rooted for Starbucks despite the ire engendered when Howard Schultz let the Sonics go. We’ve loved Amazon and Alexa despite what they’ve done to bookstores and the cost of living. We could wrap ourselves in their success, their celebrity, that fact that little old Seattle was making a difference in the world.

Now the Amazon illusions have been shattered: It doesn’t care about us.

And, of course it doesn’t. That’s not Amazon’s job. It will open HQ2, grow jobs wherever it is in its self-interest to do so. Still, when it “paused” construction on its Seattle HQ before a vote on the head tax to help with homelessness, the light bulb went on for many people. Why, they are making an extortionate threat!

Some of those people whose eyes were opened are in other cities, including those on the shortlist for Amazon’s HQ2. For months during the HQ2 process, I have been interviewed by reporters in bidding cities and have warned what comes with luring Amazon: the downsides of prosperity, greater leverage over cities who are grasping for a golden goose. Pitting these communities in a Hunger Games bidding war has been itself an unseemly warning: If Amazon is asked to help pay its way in Seattle, it bristles; cities and regions should be paying Amazon!

A group of electeds from other cities, including some HQ2 bidders, is calling BS. The group supports the head tax but also is concerned by the HQ2 process “which … has promoted a bidding war of jurisdictions competing with each other to offer greater incentive packages.” I have heard some of the city packages offered up to billions in incentives, tax breaks and public commitments.

Amazon has exacting demands for urban infrastructure, like transit, to meet its HQ2 needs. How much is it willing to pay for? Does the world’s richest man really deserve so much public largesse? Someone in an Amazon city is going to get a good paying job there, but many more will be effectively paying their salary through public giveaways.

Well, deserve doesn’t have much to do with it. If he can, he will.

This has angered many in Seattle who feel they are left holding the bag of the impacts of “prosperity.” But other cities are getting wise. Amazon’s veil has slipped.

The problems of homelessness and affordability are already causing parts of Seattle to boil. The anger splits at least two ways. The business community and many in Seattle object to a tax that could threaten needed jobs and they don’t trust the city to spend the new tax money wisely.

Others are tired of corporate bullying. The compromise tax makes a point, even if it might not make enough of a difference to homelessness or affordability in substance.

People who are complaining about the incivility in Seattle politics are often the same ones who had contempt for consensus or comity. In recent decades, Seattle was once a middle-class city that encouraged a quieter kind of process. We now seem to be cycling back to more contention: neighborhoods vs. urbanists, socialists vs. business, homeowners vs. the homeless.

For years, politics wasn’t a particularly interesting spectator sport in the city. That’s changing for the left, right and center. One interesting aspect of the head-tax compromise: It has unanimous council support and will be signed by the mayor, but the city is left feeling more divided than ever.

Those who wanted to tax Amazon didn’t get a big enough bite; those who feel a more regional approach is necessary are frustrated that the city picked the wrong financing method. Amazon is still not sure if it’ll lease space in an enormous new high-rise being erected in downtown; small business owners not of Amazon scale are feeling brutalized; a fracture in Seattle labor movement was revealed; confidence in the city council has been shaken; and the mayor will be under a microscope to see that the new tax delivers.

Everyone has everyone on notice.

Seattle Nice has left the building — another casualty of new Seattle.

It might be less comfortable than old Seattle, but at least we have a clearer idea of where people stand.