Should #MeToo rob us of art?

When it's two degrees of separation from Junot Díaz, a Seattle theater makes a choice. 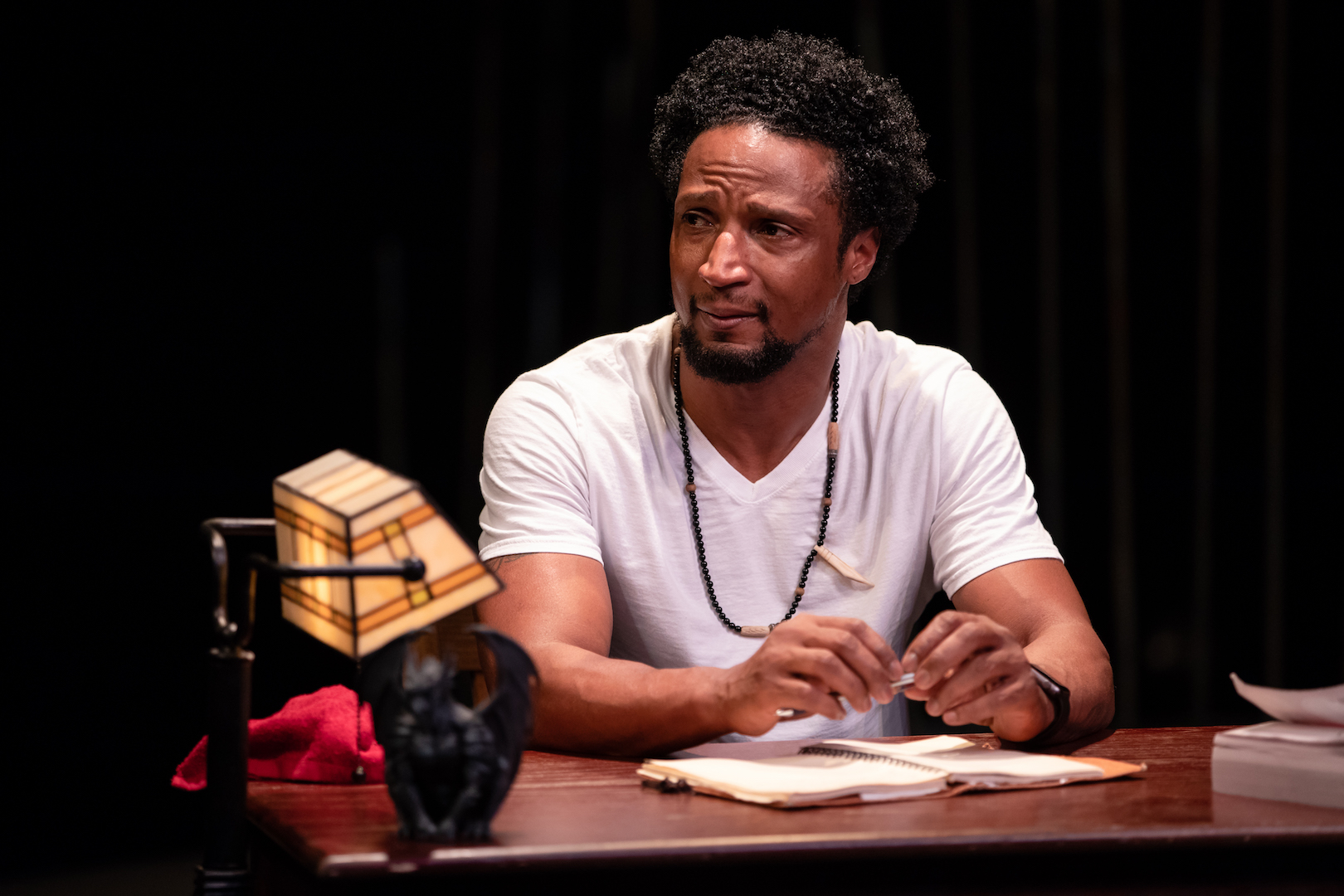 Elvis Nolasco in Junot Díaz's The Brief Wondrous Life of Oscar Wao, produced by Literature to Life and presented by Book-It Repertory Theatre. The show closes May 6 at the Center Theatre. (Photo by John Ulman)

Actor Elvis Nolasco delivered an especially remarkable performance at the Center Theater playhouse on Friday night. Remarkable because when #MeToo slams your soul, the show must go on.

The play is The Brief Wondrous Life of Oscar Wao, which has garnered Nolasco accolade after accolade for playing more than 20 different Dominican and Dominican American characters. The show profoundly speaks to the actor because he, too, is Dominican and he relied, in part, on family members to help him figure out how to act out some of the characters.

But as of Friday morning, the show is now stained by the news that author Junot Díaz — whose Pulitzer Prize-winning book The Brief Wondrous Life of Oscar Wao was the play's source material — is the latest public figure to face sexual misconduct and abuse complaints.

When #MeToo curses your art, should the art be allowed to survive? When, in fact, one of the characters you have to perform is a quasi-autobiographical creation by the shamed artist himself, how do you go on?

Nolasco had dreams of taking Oscar Wao back to the neighborhood where he grew up: Washington Heights in Manhattan, also known as The Little D.R. The production, adapted for the stage by Literature to Life/Young Audiences New York, had once played in the neighborhood before. It was overdue for a second time, Nolasco figured.

“We’re going to bring it,” he told me in an interview last month. “We're gonna spread this love.”

Hollywood had attempted — and failed — to write screenplays adapted from the book, Nolasco said. Díaz had seen the theatrical show years ago and gave him his opinion: “‘We cracked the code to this novel.’ Those were his words exactly,” the actor recalled.

Nolasco had envisioned the possibility that now a movie version could, indeed, take root.

“Let's bring this amazing story to the screen,” he said, back in April.

But will Seattle audiences be the last to witness Nolasco’s theatrical tour de force? The show completes its two week-plus run with Book-It Repertory Theatre today.

Nolasco — 40-something, charismatic, with an athlete’s build and an elastic face — is a TV and film actor who’s probably best known for his roles in the ABC series American Crime. He was devastating as the drug addicted and hopelessly in love Carter Nix in Season 1. He’s repeatedly worked with director Spike Lee (Clockers, The Sweet Blood of Jesus, Old Boy, the Netflix series She’s Gotta Have It). He recently completed an HBO/Kathryn Bigelow-produced pilot Mogadishu, MN and wrote, directed and starred in his own film, Time 2 Surrender.

The theatrical version of Oscar Wao premiered in 2010. Seattle’s Book-It Repertory Theatre spent more than a year working to bring the production here. “Elvis was the only person we found who felt like his life experience, talent, and passion could make this text shine,” director Elise Thoron explains in the program notes.

There is no arguing that Nolasco is brilliant. The way he hunches his shoulders up to his ears then crosses his eyes and suddenly transforms himself into the 300-pound, socially awkward blerd Oscar. The way he squints and downturns his mouth to embody a no-nonsense abuela. Or with his hand, fingers spread, delicately and repeatedly tapping his clavicle, he’s the demure and irresistible Ybón.

His is a 90-minute (no intermission) seamless performance in English, Spanish, heavily-accented English and Spanglish that transports you from sugarcane fields, a nightclub, a death camp all in the Dominican Republic to a dorm room in New Jersey, a train bridge, a hospital room and more. The storyline zooms forward and backward in time: the wrath of dictator Rafael Trujillo in the 1930s, Oscar’s determined quest for love in the present day; and the perpetual fuku — a curse or doom — that endures for generations.

Nolasco inhabits the small theater by leaping and spinning and crawling, dressed in a white T-shirt, gray workout pants, red hand towel, completely in the zone.

I saw him perform at the beginning of the show’s run on April 21. A few days later, I sat down with Nolasco on a bench at Seattle Center, not too far from the playhouse, for an interview. I was supposed to write a story about the interview a week ago but for all sorts of reasons (including plain procrastination), I put it off.

Part of the procrastination, I’ll confess, is that the interview was decidedly personal: I am Latina (Colombian-Peruvian); Nolasco is a formidable Latino actor in a show based on a book by one of the most famous (living) Latinx authors of our time. (Not too long ago, I interviewed said author over the telephone about his newly published children’s book.)

On Friday, I had run out of time: I had to bang out a story because the Oscar Wao show was scheduled to close in two days. But Friday morning began with the news about Díaz: allegations of how he forcibly kissed a woman while in graduate school; allegations of verbal abuse by three other women. Through his agent, Díaz told the New York Times that he took “responsibility for his past.”

“I am listening to and learning from women’s stories in this essential and overdue cultural movement," Diaz said. "We must continue to teach all men about consent and boundaries.”

He subsequently bowed out of a writers’ festival in Australia.

Now Díaz — the Pulitzer winner, the MacArthur genius, the MIT creative writing professor — is tagged with his own disgraceful footnote and I’m left disappointed, angry, jaded and sad. I relate to the women accusers and I emphatically applaud them. But as someone who was sexually violated as a kid, I also identify with the accused. I, like so many others, was ruined by Díaz’s courageous and recently published essay about being raped when he was 8 years old.

Should #MeToo rob us of art? Are two degrees of Junot Díaz enough of a gulf to justify theaters continuing to present the play? You can pull Sherman Alexie books off a shelf. You can strip a Chuck Close painting off a wall. You can delete R. Kelly from your playlist. But what about art inspired by art that’s been created by someone you now hate?

In our interview, Nolasco spoke about how much the book spoke to him as a first-generation Dominican American.

“When I got the book, I read it from beginning to end, every single footnote. Being able to hear your voice, or being able to see yourself, whether it's in a play like In The Heights or whether it's reading a book like The Brief Wondrous Life of Oscar Wao ... oh wow, this guy is coming and speaking from a Dominican perspective.”

He spoke about growing up in Washington Heights speaking Spanish, the son of a nurse/home attendant and a tailor, both immigrants from the DR in the 1960s. He spoke about his grandma cooking arepas and habichuelas con dulce; his summers spent on the island — because his mother insisted — in el campo eating guava straight off the trees.

He talked about growing up and watching his Uncle Victor, his Aunt Flor dancing salsa and the hustle. “I was mesmerized by how they used to dance. My mom was a big fan of la Fania — Celia Cruz, Tito Puente — so my mom would go to these concerts, like at Madison Square Garden, and she would take me and my brothers with her. And then by the time I got to junior high school, I was introduced to breakdancing. And breakdancing led me to theater. And theater to film, film to television. And here we are.”

The Brief Wondrous Life of Oscar Wao, he explained, is a story about hard work, sacrifice and courage — courage along with fuku, the curse. “We all have that thing. Our insecurities, self-doubt, it might be addiction. It might be whatever. It could be so many different things.”

When the Díaz news broke on Friday, the staff at Book-It quickly held a meeting to figure out how it was going to respond. “It’s so heartbreaking,” managing director Kayti Barnett-O’Brien told me later that evening. “There was this overwhelming feeling, the duality of feeling strongly that the people should be believed. And then you hear these things about an artist whose words touch us so deeply. How do you separate it? Can we? I’m not sure.”

Book-It, which has no personal relationship with Díaz, talked it through carefully. It released a statement late Friday morning saying it did not condone Diaz’s behavior; that the Oscar Wao story is valuable and that the show’s run would continue as scheduled with final performances Sunday afternoon.

All day Friday, I kept thinking about the actor; how after delivering that April performance, he turned his back to the audience and made the sign of the cross and kissed his fingers, before taking a bow.

In our April interview, I asked him about that.

“You know, to always just be in gratitude,” he said. “I just have a strong belief that the arts, whether you're a painter, a musician ... we have an amazing gift. And I think that as artists we understand that we have a gift and that that gift is not for us to keep, but to share, you know, with the people.”

On Friday, I decide to go see the show again; it’s sold out but I get in on a waitlist. In the lobby, I watch a crowd walk past a big red poster of Díaz and posters of the history of the Dominican Republic. No one, the theater later explains, registered any sort of complaint.

The lights dim. The sounds of drumming fill the space: a desk, some chairs, a refrigerator with Planet of the Apes and Star Wars posters (Oscar is a total sci-fi nerd).

But the show begins with Nolasco as the cocky but anguished narrator Yunior — Diaz’s quasi-autobiographical creation. He’s about to tell us a tragic tale so before he even utters his first line, the character takes a breath. His is deep and pronounced.

And from a row in the back, the ephemeral nature of theater feeling even more acute, I am slayed by Nolasco’s gift.