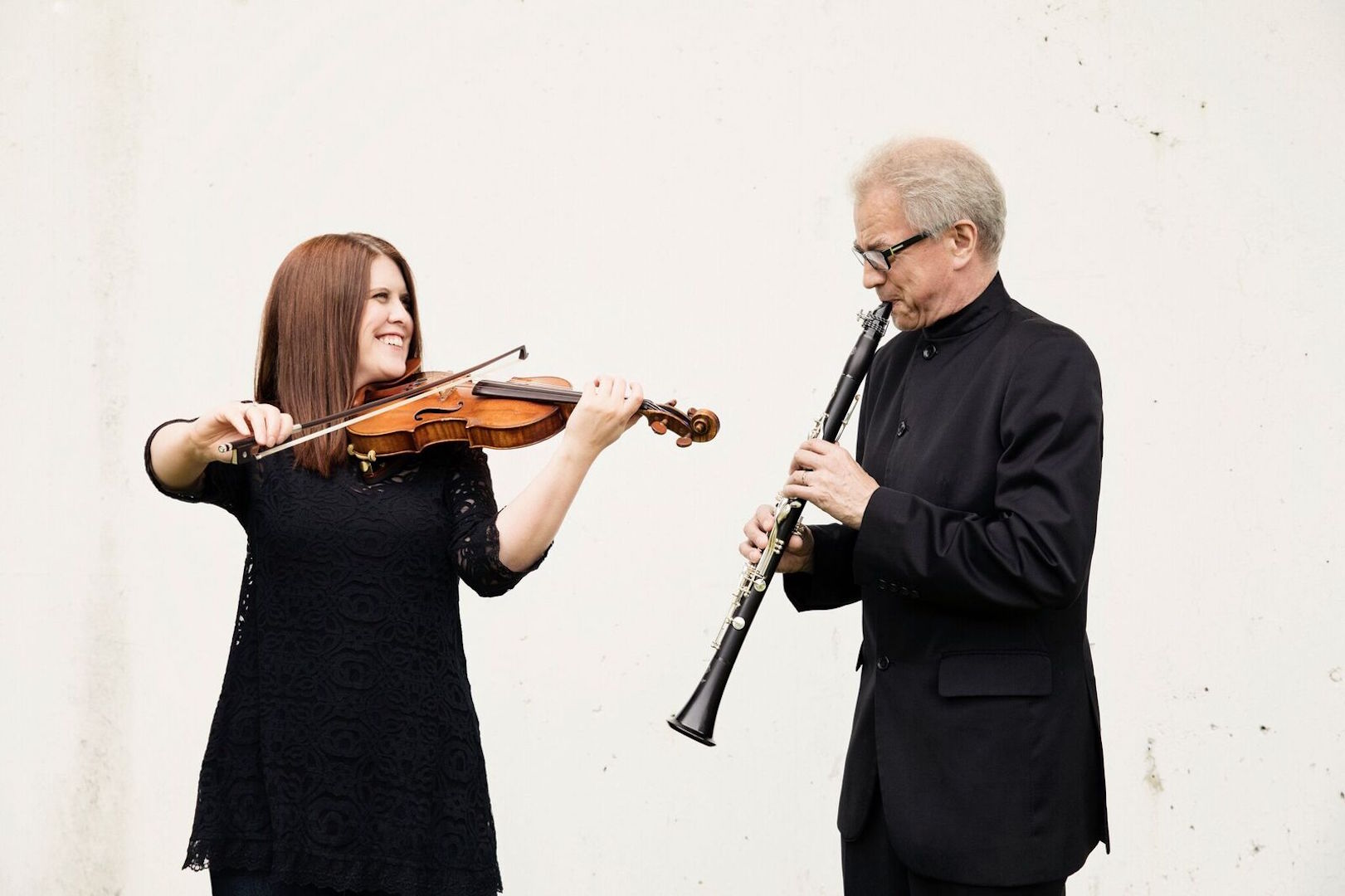 Just as it’s a thrill to see dancers up close instead of across the yawning distance of a concert hall, it can be thrilling to see and hear chamber players in a small venue.

You can study their faces, tap into their intensity, ride along on their musical momentum as their glances, grimaces and smiles pull you into the action. Their visceral and sometimes ecstatic responses to sounds of their own making create dramas that are often riveting.

Telepathy seems to play as key a role as skill — although astounding musical skill is a given. The performers of the Seattle Chamber Music Society (SCMS) are, after all, among the finest on the planet.

In this summer’s festival (July 2-28), you can hear the concertmasters of the Berliner Philharmoniker, National Symphony Orchestra and Orchestre symphonique de Montréal on violin. You can enjoy the pyrotechnics of the principal clarinetist and principal violist of the New York Philharmonic in intimate surroundings. You can savor the sounds of the Juilliard String Quartet’s cellist and the principal cellist of the Seattle Symphony Orchestra in a small-scale setting. The talents of the 44 players involved have taken them all over the world. We’re lucky to have them here.

And the listening conditions are close to perfect, thanks to the pristine acoustics of Benaroya’s  Nordstrom Recital Hall. The audience is attentive. There’s none of the chatter you get at pop concerts, little of the bronchial hacking you get at the Symphony.

The etiquette, while firm, isn’t stuffy. Instead, it’s meditative exercise, allowing you to merge with the minds of the composers. Think of it as a conversation: an invitation to wit, anguish, rapture or catharsis. If a musical moment is funny, it’s fine to laugh. If it’s sad, you can sigh.

Once hooked, you can’t get enough of it.

Here are some festival picks that have caught my eye:

When it came to chamber music, French composer Maurice Ravel, eccentrically, wrote one of each thing: one string quartet, one sonata for violin and piano, one sonata for violin and cello. His 1914 piano trio is the most expansive of these, fusing Asian influences and high romanticism into a single seductive package. The sounds he gets from his three instruments blend in mercurial, ever-surprising ways, and the piece needs complete mastery from its players. It should get it from prize-winning pianist Alessio Bax, Seattle Symphony principal cellist Efe Baltacigil and longtime festival favorite, violinist Augustin Hadelich.

“When Hadelich first came on the scene,” Alex Ross wrote in The New Yorker, “he was noted for his pinpoint brilliance and for his sweet, cultured, almost old-fashioned tone. It was as if a Golden Age violinist had jumped out of the grooves of a 78-r.p.m. record.” Hadelich likes to take on more modern fare too. The Ravel trio should hit a sweet spot right in-between.

Also on the program: Stravinsky’s “Suite Italienne for Violin and Piano” (in his courtly neo-classical style) and Mozart’s “Quartet for Piano and Strings in E-flat Major, K-493.”

The big draw in this free recital is pianist George Li whom SCMS artistic director James Ehnes discovered while on the violin jury for the 2015 International Tchaikovsky Competition in Moscow.

“I spent my late-nights reviewing the videos of the piano competitors,” Ehnes wrote in a recent e-mail. “George's playing really spoke to me. I was so pleased when he was awarded the Silver Medal, and I invited him to Seattle on the spot. I think he was surprised to be approached by a member of the violin jury while still on stage at the result ceremony!” Ehnes calls Li’s playing “poetic, thoughtful, and electrifyingly virtuosic.”

Li is enrolled in the Harvard University/New England Conservatory joint program. How unusual is it for an SCMS player to still be in school? Ehnes himself was only 19 and just finishing his sophomore year at university when SCMS founding director Toby Saks invited him to play in the festival.

“I think it’s a nice part of our legacy,” Ehnes says, “that we have presented a number of notable musicians when they were young and largely unknown.”

This will be Li’s third SCMS appearance. He’ll also play on July 2 (Stravinsky’s “Suite Italienne”) and July 5 and 6 (works by Schumann).

Okay, with a title like that, you’ve got to find out what the scoop is. Howard is a prolific film-score composer (The Hunger Games, Maleficent, Fantastic Beasts and Where to Find Them), but he isn’t on most people’s radar as a concert-hall composer. How did SCMS wind up commissioning a piece for four string players, flute and clarinet from him?

“James wrote an absolutely beautiful violin concerto for me in 2014 which I premiered with the Pacific Symphony,” Ehnes explains. “Through that experience, we became great friends and have collaborated on a number of projects. He has not written much concert music, but what he has written is extremely beautiful and well-conceived. I was thrilled that he agreed to write a piece for us.”

As for the sextet’s unusual title: “The piece was inspired by a painting James has by the artist Chris Johanson called Balloon Heads. The painting shows these various ridiculous and somewhat troubling faces on balloon ‘heads,’ and it made James think about the current state of political and social discourse, in the media in particular, with different voices nattering away in opposition to one another. It is a fascinating and compelling piece that I think will be an important addition to the repertoire.”

“All three of these composers were active in Russia in the early 20th century,” Bendix-Balgley said by e-mail this week. “Achron, Krein and Engel used and adapted traditional Jewish themes for their classical compositions. Joel Engel was involved in collecting Jewish folk tunes in villages all around Russia. Joseph Achron was a virtuoso violinist and also a composer. His “Hebrew Melody” is perhaps the best-known piece from the group, and it was championed by the great violinist Jascha Heifetz. Alexander Krein sets the traditional melodies in an evocative harmonic language.”

For Bendix-Balgley, this music is a way of tapping into his ethnic heritage.

“The Bendix side of my family is German-Jewish and the Balgley side is Russian-Jewish, so exploring this music is especially meaningful for me because of my ancestry,” he says. “I have played traditional klezmer music since I was very young, and I was very excited to discover this wonderful repertoire of classical compositions based upon Jewish folk music.”

Bendix-Balgley is a composer, too, and klezmer tradition influences his work. “For my own compositions, I have often (but not exclusively) used Jewish and klezmer music as an inspiration. I wrote a klezmer violin concerto entitled ‘Fidl-Fantazye’ because I wanted to bring traditional klezmer style to the concert stage and explore how it could be combined with the symphonic sound.”

“We had actually discussed commissioning a work by him,” Keefe said in a recent e-mail exchange, “but it was a total surprise when Osmo's son brought it to us from Finland on our wedding day.” The title, of course, is a combination of their names, as well as the name of the Greek god of love.

Vänskä’s piece, like Aho’s, is for clarinetist (himself) and violinist (Keefe).

“Osmo has always been interested in composing,” Keefe explains, “and started by doing a good deal of arranging for various ensembles ever since he was a teenager. He was inspired by Aho’s piece for us, so when he had a couple of weeks off last summer, he started writing his own duo. … He occasionally would play something for me to get feedback, but I tried to stay out of the way until it came time to put the finishing touches on it.  This will be the first time we perform the full work in public.”