Saying goodbye to the godfather of Gas Works Park

Richard Haag, a leader in the fight against unchecked urban development, has died. 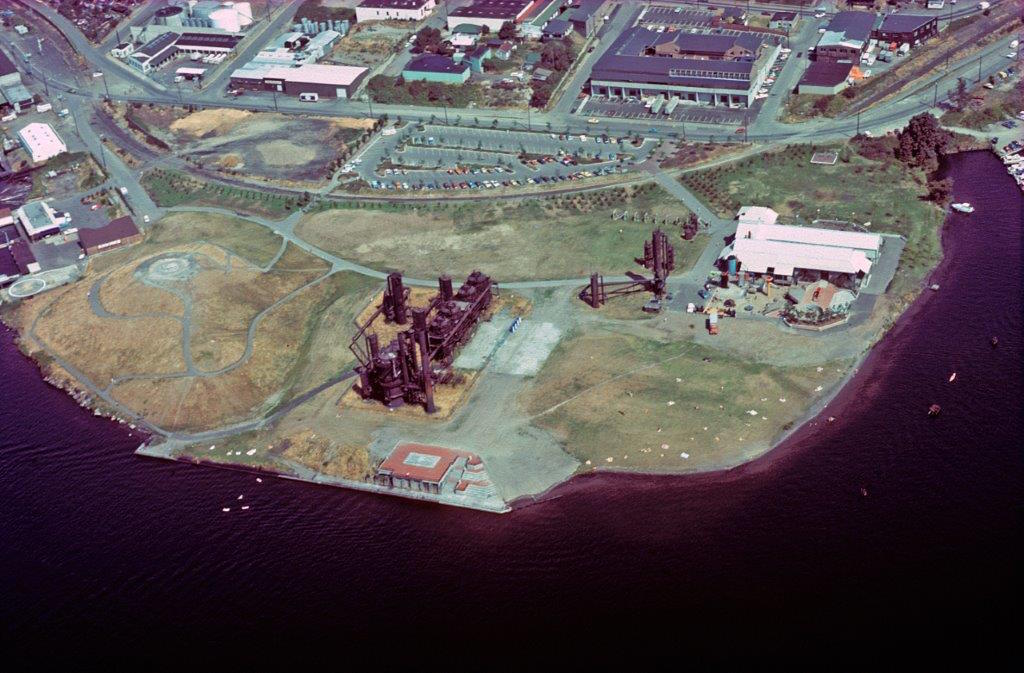 An aerial view of the future Gas Works Park site in 1969. (Courtesy of UW Press).

A landscape architect who literally changed the shape and substance of Seattle during a more than 50-year career here, Haag was part of a generation of architects — along with Fred Bassetti, Victor Steinbrueck and Ibsen Nelsen — who engaged actively in civic life at a time when a booming Seattle needed them to make a better, imaginative city against the forces of unchecked development.

Word came out this week that Haag died in early May at the age of 94.

Haag will be remembered for his huge local influence. He was brought to Seattle to help start a landscape architecture department at the University of Washington in 1958, which he did. He came at a time when the city was being transformed by I-5, the world’s fair and suburban sprawl.

He became the landscape architect for Seattle Center after the fair. He designed the grounds of the Battelle think tank in Laurelhurst. He designed the park-like Bloedel Reserve on Bainbridge Island. He worked with Steinbrueck and other activists to save the Pike Place Market from urban renewal-style demolition. He designed Victor Steinbrueck Park, which preserved a view of Elliott Bay and Puget Sound for the neighborhood’s street people who, he thought, deserved a public living room. They couldn’t afford condos, but the views, Haag passionately believed, shouldn’t just be for the rich.

Haag gained worldwide acclaim for the transformation of an old gas plant on Lake Union into Gas Works Park — an incredible example of adaptive re-use hailed around the world, and way ahead of its time. The site’s contamination was mitigated and it became one of the city’s most beloved playgrounds with its kite hill, sculptural gasworks and stunning views of the lake, downtown and surrounding hills. He turned an “industrial ruin” into a place for people to walk, picnic and frolic. We have not a place to waste, it seemed to say.

Arguably there has been no more important influencer of the city’s landscape since the Olmsteds.

In his later years, Haag fought almost continually to preserve his legacy from change — “improvements” to Gas Works, threats to Steinbrueck Park (there is a move afoot to remove it from the Market’s historic district and get rid of the totems), the development of the old Battelle Memorial Campus site. Many of these threats came at a time when his recognition was finally being won internationally. The Cultural Landscape Foundation dubbed him a “Pioneer of American Landscape Design and produced an oral history of Haag’s career. A 2015 book celebrating his work was published by the University of Washington Press and helped solidify his reputation. Seattle is blessed with major landscape architect talent as a result of his teaching and mentorship.

A few years ago, Haag wrote to me wanting to start a below-the-radar campaign to change the name of Seattle to Sealth. “Speak or whisper Sealth in front of a mirror — it just flows out, effortless….Now say Seattle, WA. Sealth will be preferred by persons challenged by enunciation, by poets, graphic designers, typesetters, word processors, text messengers,” he wrote.

Even in his nineties, Haag never stopped tinkering, thinking, conspiring and wanting to make Seattle — no, Sealth — a better place.

Richar Haag's Gas Works Park was profiled in an episode of the PBS series "10 That Changed America."