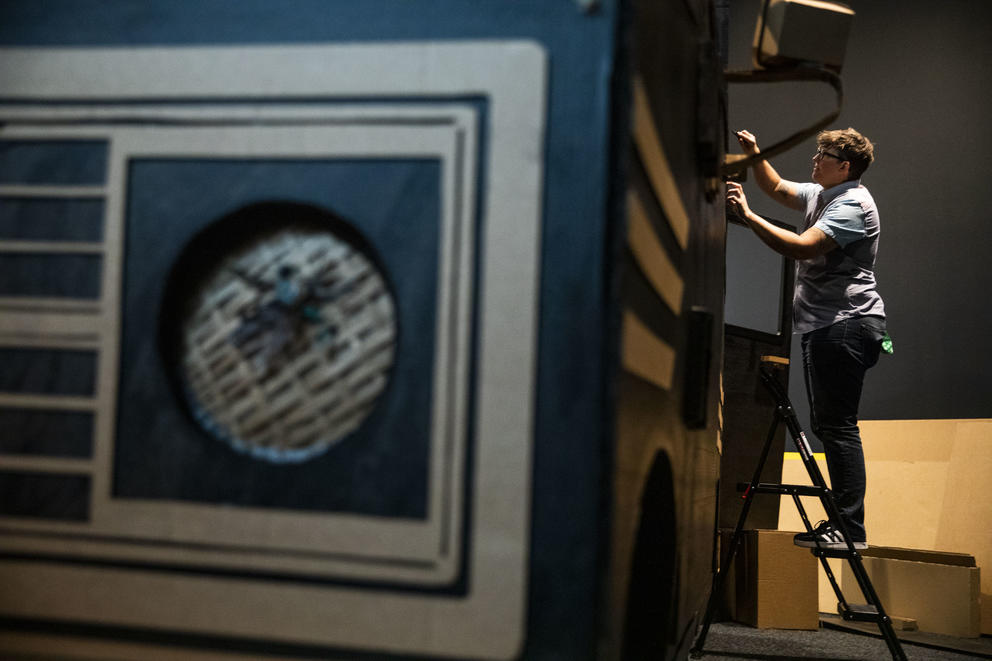 Clyde Petersen works on his art installation Merch & Destroy at Bellevue Arts Museum on Tuesday, Oct. 23, 2018. The 16' x 8' van is made completely of cardboard and is a “love letter” to his time on the road as both a musician in the band Your Heart Breaks and as a manager for various Northwest rock groups. The exhibition will run Nov. 9 - April 14. (Photo by Dorothy Edwards/Crosscut)

There’s a van parked in a gallery on the third floor of Bellevue Arts Museum. It’s nothing fancy, a standard-size black-and-tan Ford Econoline with bench seats. The doors have been thrown open to reveal a drum kit, guitar case, amp and keyboard — signs of a band on tour.

Crushed beer cans litter the floor, and a pack of cigs sits on the dash behind the steering wheel. It looks ready to roll on to the next gig — just slam close the double doors, adjust the old-school temperature knobs, pop a CD into the player and go. 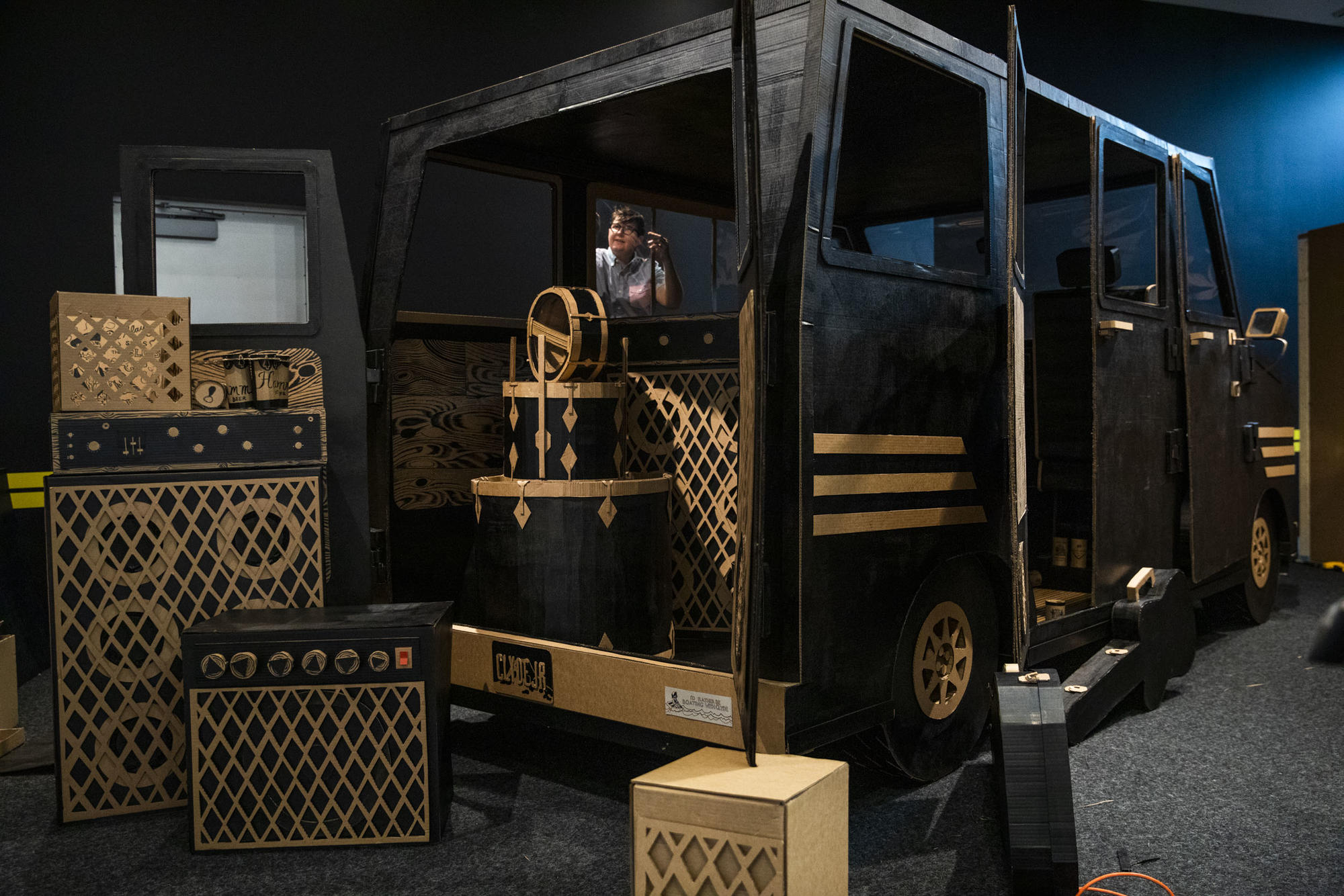 But the van and all its contents are made entirely of cardboard.

“I’m so excited about the whole thing being cardboard,” says Clyde Petersen, Seattle artist, filmmaker, musician and creator of the exhibit Merch & Destroy (at BAM Nov. 9 – Apr. 14). Shy but emanating a can-do spirit, he sports tattoos of a calculator, a robot and the phrase “tuff enuf” across his knuckles. “Cardboard is very inexpensive, flexible, strong,” he says. “And it’s so satisfying to work with.”

Petersen has been constructing the show for about three months. In addition to the cardboard van, he has built a replica green room — a cramped space graffitied (as is the custom in rock clubs) with ridiculous, anthropomorphized phalli — that will soon be filled with cardboard beer cans and a bowl of cardboard hummus and carrots.

At this moment, about two weeks before the opening, Petersen is using a box cutter to remove the van’s windows (made of clear plastic sheeting), which he says he added at some point due to “peer pressure.” But the windows have proven prone to collecting dust and just don’t sit right with him. With this edit, except for the hidden strips of Velcro holding the panels together and a lot of glue, the piece will be pure cardboard.

The level of detail is astonishing and delightful, revealing new surprises each time you peer closer. Petersen enlisted Seattle artists Jennifer Zwick, Robert Hardgrave and Kerstin Graudins to help craft the multitude of objects. The tires have what Clyde calls “Charlie Brown stripes” (zig-zagging treads) and hub cabs complete with lug nuts. The steering wheel spins, the seats have piped seams and the road map unfolds. There are windshield wipers, webbed speaker covers, wood paneling, burly door hinges, a ribbed floor mat and, in the name of accuracy, bugs splatted on the front grille.

“I think reality is so much more interesting than fiction,” says Petersen, a Stranger Genius Award winner who studied documentary filmmaking in college. In 2016, he released Torrey Pines, a feature-length, animated musical memoir about a childhood made tumultuous by his mother’s mental illness. It’s charming and funny and heartbreaking all at once, and reflects the aesthetic he brings to the stop-motion music videos he creates for Northwest bands: a playful, retro vibe underscored with ennui.

For as much as he values truth over fiction, Petersen is a huge fan of fantastical scenarios and the mental escape cartoony visions can provide. Among his influences he lists John Waters, Pee Wee Herman and Wayne White (the Pee Wee’s Playhouse designer, who shared cardboard-construction tips with Petersen when he was here in August presenting his towering “Here Come the Boren Sisters” at Seattle Art Fair). “I’m interested in capturing a mixture of history and nostalgia,” Petersen says. “Kind of like a docudrama,” he adds, laughing at the word.

It’s cool to build your own world in these dystopic times. It allows you to exercise a little control over your environment.”
— Clyde Petersen

After touring Torrey Pines across the country for the last two years — and being on and off the road as a band manager, roadie, musician and documentarian over the last 20 years — Petersen was ready to come home, sit still and make art. Out on the road, tour vans serve as both home base and forced togetherness. “I like being alone, in a quiet place,” he says.

He loves the meditation that meticulous, repetitive tasks can provide. Creating the life-size tour van — a project he’s had on the back burner for four years — is a way to dig into the hands-on work he loves, and escape into creative world building.

Having already created a stop-motion animation version of his life, it’s as if Petersen is now building a real-world animation large enough for him to step inside.

“It’s cool to build your own world in these dystopic times,” Petersen says. “It allows you to exercise a little control over your environment.” A member of the queer and trans community, he says he tries not to read the news these days. “I already know there’s a lot of hate in the world, I don’t need reminding.” Instead, he says, “I’m happy to advocate for the trans community and to be a role model for trans youth.” This includes hiring a trans student as an employee to help build this and other projects.

In its use of simple materials to create an immersive, imaginative world, Merch & Destroy recalls the work of another Petersen hero, turn-of-the-20th-century filmmaker Georges Méliès (known for his elaborate, analog set-building in cinematic flights of fantasy such as the iconic A Trip to the Moon). But instead of shooting a rocket into the eye of the man in the moon, Petersen is propelling a van onto an imaginary road with endless yellow lines.

For now, there’s more to finish in time for the opening, including making some 100 cardboard beer cans to strew across the green room floor. He'll also hang six cardboard “fantasy guitars,” created for his earlier Shredders series (one of which, in the shape of a wolf head, is said to “kill rapists”). And maybe, for inside the van, he’ll make a cardboard bag of cardboard almonds, a salty staple of Petersen’s life on the road. Just thinking about crafting such a thing, he smiles and says, “That would be the cherry on top.” 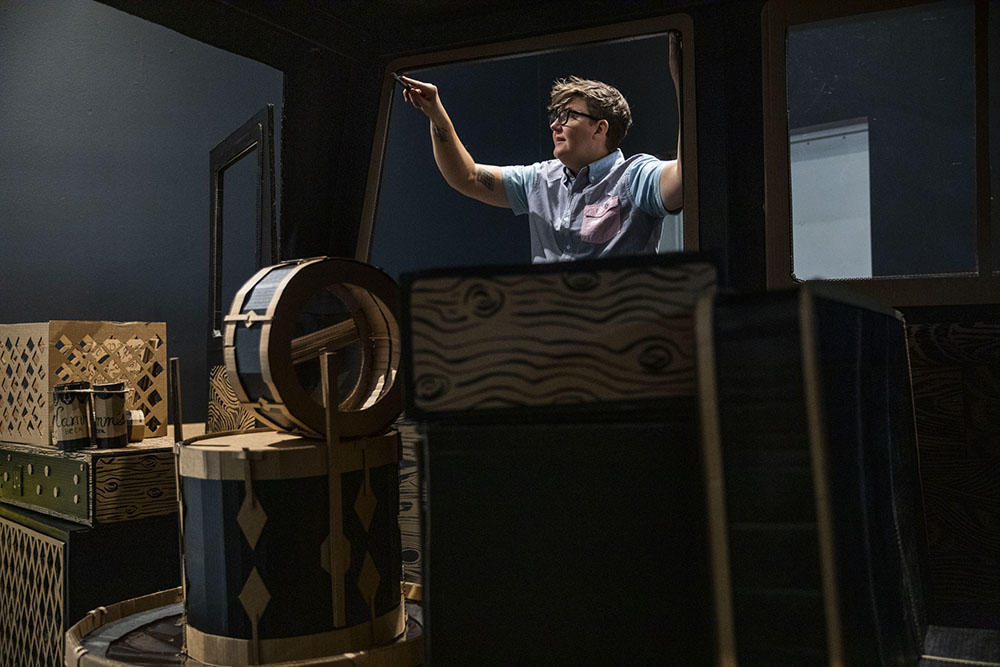 Juneteenth: The legacy work of resistance and liberation

Dorothy Edwards is a staff photojournalist at Crosscut. Find her on Twitter and Instagram or email her at dorothy.edwards@crosscut.com.