Undergrads for Kavanaugh raise a pint in Seattle

Claiming the confirmation fight has emboldened the right, the UW students believe the whole affair will be forgotten “real fast.” 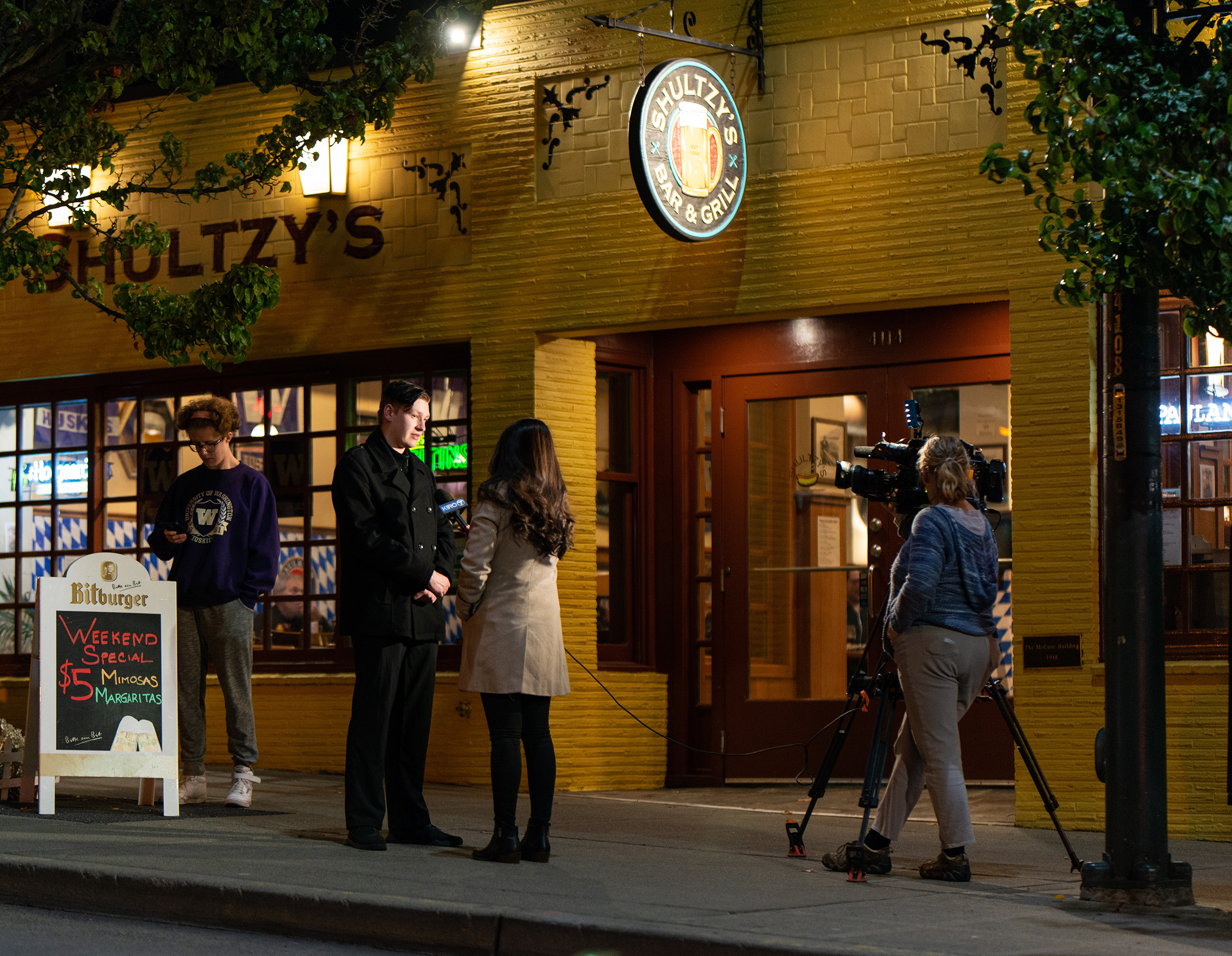 Chevy Swanson, president of the University of Washington College Republicans, speaks to the media outside his group's "Beers 4 Brett" event. (Caean Couto for Crosscut)

Three hours had passed since the U.S. Senate confirmed Brett Kavanaugh to the nation’s high court when Chevy Swanson arrived at Shultzy’s Bar & Grill on University Way. Dressed in all black — black shoes, black slacks, black peacoat and a black cowboy hat covering the kind of haircut we no longer associate with Macklemore — the president of the University of Washington's College Republicans was sitting among a half-dozen of his fellow club members, ready to celebrate. Building on a conservative meme that had surfaced in the wake of Kavanaugh’s rageful testimony before the Senate Judiciary Committee, the group had dubbed the event “Beers 4 Brett” and promoted it to the public.

How the night would unfold was anyone’s guess. Earlier in the day, the senate had voted, over the anguished screams of female demonstrators, to confirm Trump’s embattled nominee, who has been accused of sexual assault by two women, with a third naming him as a likely participant in gang rapes. (Kavanaugh maintains his innocence.) The nation had just endured its most rancorous period of partisan debate in recent history, touched off by the accusation from Christine Blasey Ford, the 51-year-old psychology professor who alleges that Kavanaugh attempted to rape her when both were in high school. The ripples could be felt in downtown Seattle, where anti-Kavanaugh protests swelled into the afternoon. Displays of support for Trump and the conservative swing of the Supreme Court — in a city where the president received just 8 percent of the vote  — could be explosive.

There was some indication, early on Saturday, that “Beers 4 Brett” could become tense. Just before noon, management from Shultzy’s commented on the UW College Republicans Facebook page, requesting that the group find a new place to celebrate. “We do not promote or endorse any one religious or political viewpoint,” the bar wrote. “As such, due to the political nature of your planned event, we request that you find another venue to celebrate.”

Swanson and the College Republicans quickly decried the decision and made arrangements at another nearby bar. But, hours later, on the advice of their lawyer, they returned to Facebook to announce that they would still be holding the event at the original destination, in defiance of the earlier request. In a Facebook post, Bill Becker, an attorney from the Los Angeles-based legal group Freedom X, which has defended the college Republicans before and touts itself as a protector of “conservative and religious freedom of expression,” wrote that he would sue the bar if it denied the students service. (Reached by phone, Becker cited as grounds for the threat Seattle’s public accommodations ordinance, which he says prevents discrimination on the basis of political ideology.)

The UW College Republicans have courted controversy in the past. On Trump’s inauguration day, in 2017, the group invited the now-disgraced far right provocateur Milo Yiannopoulos to campus, catalyzing a chaotic confrontation outside Kane Hall, where the former Breitbart editor spoke to a packed house. The commotion outside resulted in bloodshed after a liberal activist was shot in the stomach by a Yiannopoulos supporter. This past February, the group welcomed Joey Gibson, the leader of the conservative group Patriot Prayer, to campus. Gibson has garnered criticism for permitting such far-right hate groups as the Proud Boys, ACT for America and Identity Evropa at his rallies. (The Patriot Prayer rally at UW remained largely peaceful.)

In the end, the bar didn’t put up a fight, and as the night began, the threat of any real clash seemed distant. A handful of unremarkable college students — mostly men, though there was one woman present — the College Republicans sat in a booth and talked quietly among themselves, offering the occasional one liner or quip about the recent Supreme Court confirmation, as I spoke to Swanson. 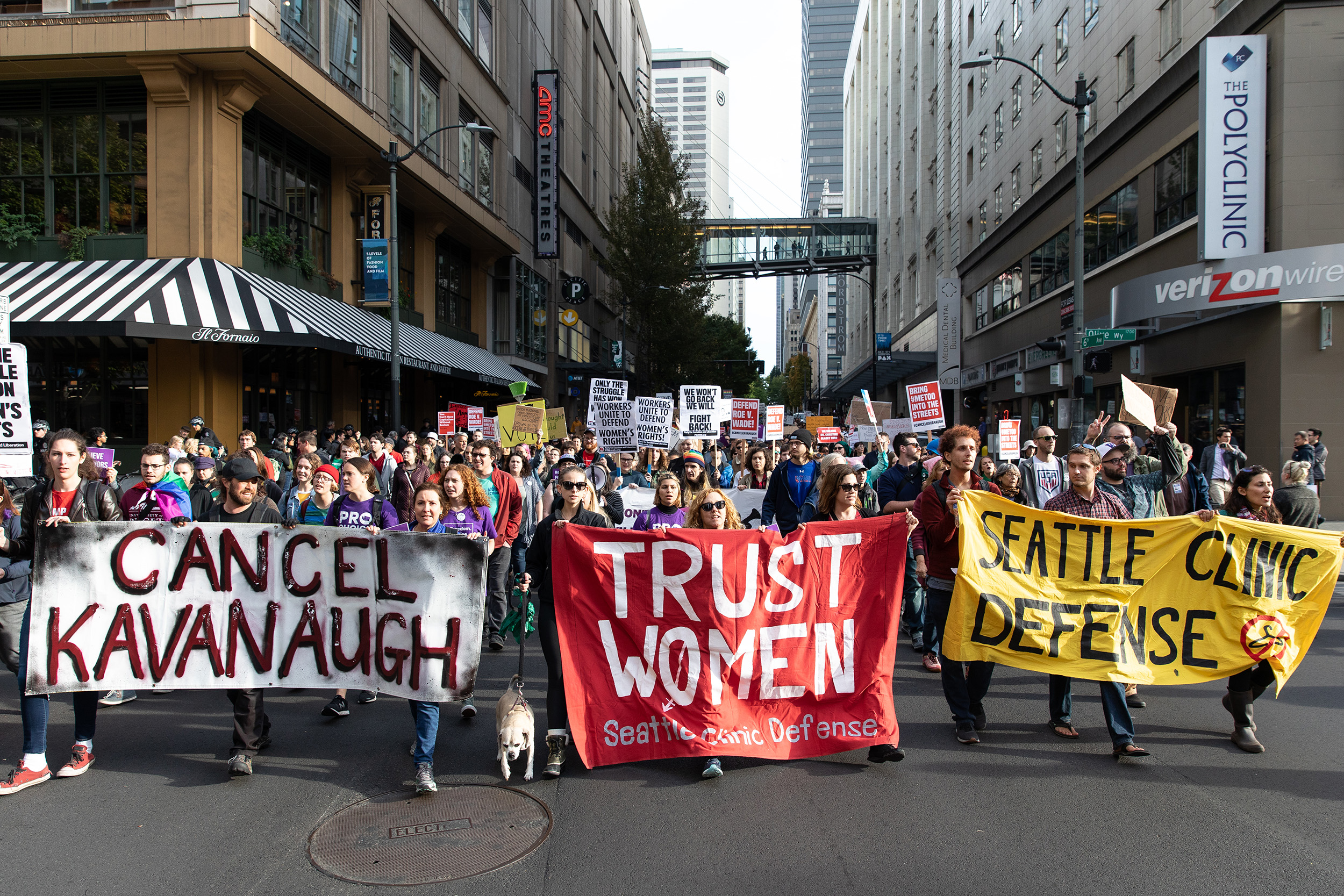 Activists fill the street to protest the confirmation of Brett Kavanaugh to the Supreme Court on Saturday, Oct. 6, 2018. (Caean Couto for Crosscut)

Activists fill the street to protest the confirmation of Brett Kavanaugh to the Supreme Court on Saturday, Oct. 6, 2018. (Caean Couto for Crosscut)

“I think showing how far people on the left will go to defame someone has united the right,” said the 21-year-old UW senior. He believes that the Democrats cynically used the allegations brought forth by Ford for their own political gain. “You don’t see people in the senate giving a crap about anyone unless it’s politically viable for them. . . . They don’t care.”

“We need to be voting in the midterms because these actions and methods [by the left] are not what the country needs,” he said.

I asked Swanson about his thoughts on Trump. He’s been great on border security, he said. “And trade!” a fellow student chimed in. The young woman at the table said she’s happy with Trump’s tax cuts, and sees value in his occasional “emotional” outbursts, including his recent mocking of Ford at a Mississippi rally, ugly and “unprofessional” as the optics may have been. “Most politicians just have this demeanor all the time where you can’t tell what their true motives are,” she said. With Trump, at least you know what you’re getting.

Swanson is unmoved by concerns that the Supreme Court’s reputation has been stained by the Kavanaugh mess. He thinks Americans “will forget real fast” and simply move on to the next outrage. “It’s political mudslinging,” he said. “It’s partisan. They’ll find something else to get mad about. Trump will tweet something and suddenly they’ll stop caring about Christine Ford because they never actually cared. It was political.”

Meanwhile, across the table, a fellow College Republican was sipping his very first beer, in honor of the Kavanaugh confirmation. Friends snapped a photo and shared it on social media.

As more jubilant young Republicans showed up, the group moved over to a longer stretch of tables. Beers, brats and burgers were ordered. A reporter with the city’s paper of record sat down at the table and talked to Swanson, scribbled some notes. Later, Swanson removed his cowboy hat and stepped outside to be interviewed by local TV news. 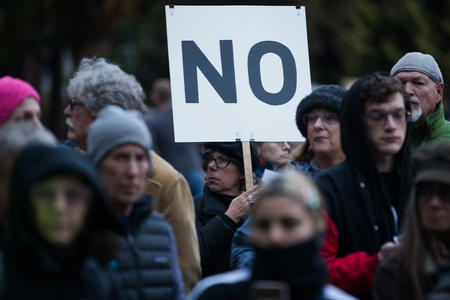 With Kavanaugh vote on the horizon, Seattle speaks out

Women gathered to share stories of assault at a Wednesday vigil. Next up, a walkout.

At a nearby table, a group of three looked on. One of these observers was Chase Cross, the first vice chair of the 37th District Democrats and a self-described “frequent flier” at local protests. He was enraged by the Supreme Court confirmation and disgusted at the support for Trump and Kavanaugh in his midst.

“I think it’s important that I witness and, when it’s appropriate, step up. So that’s why I’m here.” Cross admitted he was planning “to start some shit,” but backed down when a friend warned him against acting out, for fear of repercussions. A woman named Harlow, also at the table, seethed alongside Cross. She agreed it was probably better not to cause a ruckus. “They’ve already been emboldened by Trump,” she said. “Now we have a literal frat bro rapist who’s going to be there for the next 50 fucking years — and I wish I was dead!”

Harlow said she couldn’t watch the Kavanaugh-Ford hearings. “I’ve been assaulted, I’ve been raped,” she said. “. . . I just couldn’t. I couldn’t bring myself to do it. I can’t watch more and more and more of that shit. It’s all over my Facebook all the time. Everything is garbage all the time.”

A waiter came by and asked if they’d like anything else. Cross requested the check. Harlow ordered one more cider.

With Kavanaugh vote on the horizon, Seattle speaks out

Women gathered to share stories of assault at a Wednesday vigil. Next up, a walkout.