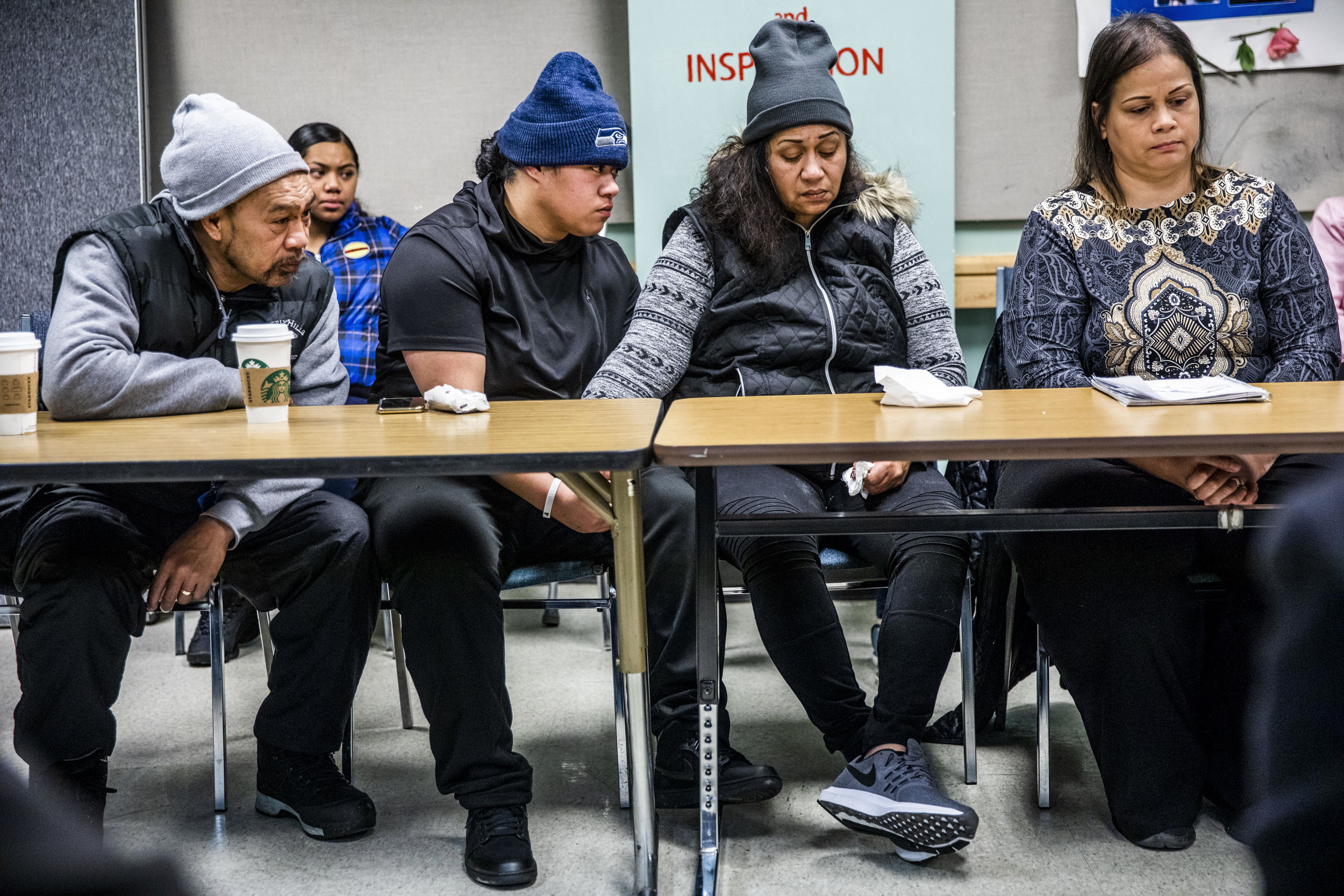 Family members of Iosia Faletogo during a press conference led by Andre Taylor of Not This Time at Seattle Vocational Institute, Jan. 4, 2019. Faletogo was killed on New Year's Eve by a Seattle police officer. (Photo by Dorothy Edwards/Crosscut)

It was an emotional morning for the family of Iosia Faletogo, the 36-year-old man shot and killed by a Seattle police officer on New Year’s Eve. Faletogo’s father, aunt, cousin and a host of others sat at a table surrounded by press on Friday, sharing what they remembered of the man who died earlier this week.

“We want to remember Iosia for the person that he was,” said his aunt, Kerina Ngauamo. “He was a human being. He was a father. He was a loving nephew. He was a brother, a caring brother to his two sisters. He was a friend to many. … He inspired, he encouraged, he lent a helping hand when he was needed.”

No matter the circumstances, any death at the hands of an officer sets off a long period of investigation, examination, anger and confusion. But Faletogo’s death takes on an even greater significance: He’s the first to be shot and killed by a police officer in King County since voters overwhelmingly approved Initiative 940 in November, which triggered a number of changes to state law with regard to deadly police shootings.

As a result of the initiative’s approval, gone is the so-called “malice” clause — a key word in state law that for years made it impossible to prosecute officers unless lawyers could prove they acted with malice. Additionally, the initiative dictates investigations must be conducted outside of the department in which the shooting officer is employed.

How the new law will affect the aftermath of Faletogo’s death is unclear.

Andre Taylor, the founder of Not This Time, an advocacy organization that began after Taylor's own brother was killed by police, said at the press conference that the removal of the malice clause means King County Prosecutor Dan Satterberg should be more aggressive when looking at whether to bring a case against the officer involved in the Faletogo incident.

“Mr. Dan Satterberg, that law no longer exists and we expect you to follow the law, the new law, and the community will be looking closely at every move that is taken,” said Taylor, referring to the malice language.

Satterberg’s decision is likely months away as he waits for details of the shooting to be examined more closely.

More immediately, however, is the question of the investigation into Faletogo’s death. The new law put into place by I-940 calls for that investigation to be independent from the department in question, but the specifics of who should carry it out are still vague.

The situation is even more complicated in Faletogo’s case because he was killed by a Seattle police officer. Because Seattle is under a federal consent agreement — which resulted in a new method of investigating police shootings — the state Legislature is likely to exempt Seattle from the new I-940 investigation requirements, under the logic that federal requirements would trump a state law.

Indeed, the Seattle Police Department has already said it will proceed with the investigatory process crafted under the consent decree, a process that would include involvement by SPD personnel.

Now, Taylor and members of the civilian Community Police Commission are calling on Mayor Jenny Durkan and the Seattle City Council to clarify how this investigation will interact with the I-940 requirements.

“We urge that city leaders clarify your stance on the applicability to Seattle of the I-940 independent investigation requirement, and engage in an open-agenda discussion with organizations and leaders who led work in I-940 so that they may convey the situation and the city's stance accurately to the hundreds of thousands of people who voted for an initiative that is now in effect that they understandably believed would mean this incident would not be investigated solely by SPD personnel,” reads a statement from the Community Police Commission.

In a response to the commission, Mayor Durkan, Chief Carmen Best and City Attorney Pete Holmes laid out the history and rationale behind the department’s current investigative process, but did not directly address how it would interact with I-940 requirements.

Faletogo was stopped by police officers while driving on New Year’s Eve. According to a post from the police department Thursday evening, he was pulled over after officers observed him making an improper lane change. Additionally, his license plate was flagged, showing the registered owner had a suspended license.

During the traffic stop, Faletogo began to run. Video footage released Thursday by the Seattle Police Department captured the chase from several different angles, filmed from the body cameras of the six police officers who chased him.

The officers caught up to Faletogo and began wrestling him to the ground. The video shows Faletogo had a handgun, which he was holding by its muzzle. As they struggle with Faletogo, the officers are telling him, “You’re gonna get shot.”

During the struggle the gun came out of Faletogo’s hand. At one point, an officer can be heard saying, “He’s reaching.” It sounds like Faletogo denies this, but the audio is difficult to parse. Moments later, one officer, identified by the Seattle Police Department as Jared Keller, shot Faletogo in the head, who immediately fell limp. This is the second time Keller has been involved in a fatal shooting; the first time was in 2017, during an incident in Magnuson Park.

Keller has been put on paid administrative leave. The department’s Force Investigation Team has begun conducting interviews with the officers involved, as well as potential witnesses.

As is often the case after police shootings, two narratives have emerged about Faletogo. On the one hand, he has a record that shows him getting into trouble with the law, most recently for distributing heroin and meth in Petersburg, Alaska. The video released by SPD shows clearly that he had a gun, which the department says was stolen.

But the parallel narrative is of him as a father, friend and musician. “Iosia was a loving father,” said Ngauamo. “He has two sons, ages 2 and 4. His sons were everything to him.”

“You know and I know that there ain’t no perfect man in this world,” said his father, Mane Faletogo.

Taylor believes the shooting to be unjustified. However, he added he was keeping an open mind as the process moves forward. He said he’d spoken with Mayor Durkan, who promised “a fair, thorough investigation.”

A spokesperson for Durkan did not immediately respond to a request for comment, but Taylor said he expected to know more next week. 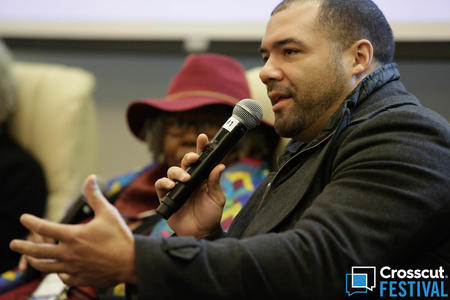 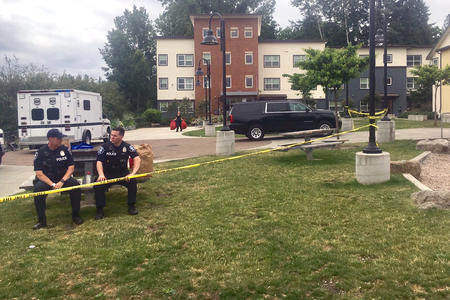 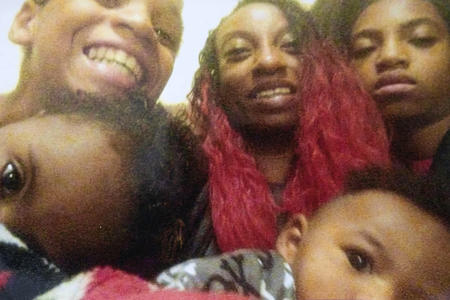 by / July 20
Article continues below