Can Puget Sound make room for 1.8M people without pushing anyone out? 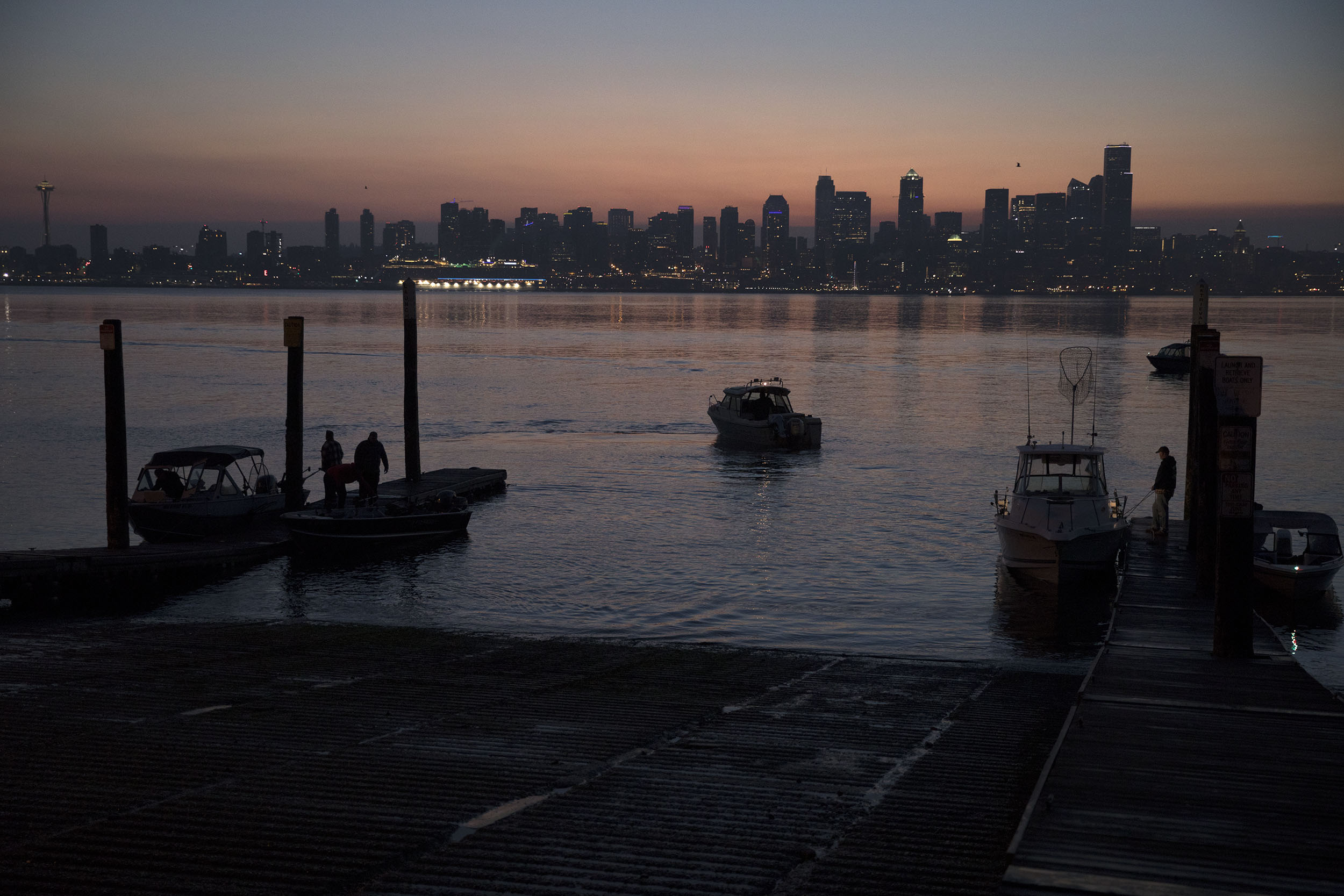 Seattle is likely to see a large amount of the region's growth in the coming decades. (Photo by Matt M. McKnight/Crosscut)

If you think the Puget Sound region is crowded now, give it another 30 years. There are currently about 4.1 million people and 2.2 million jobs in the four counties that surround Puget Sound — King, Kitsap, Pierce and Snohomish. The Puget Sound Regional Council (PSRC) predicts that by 2050, those numbers will rise to 5.8 million residents and 3.4 million jobs. Where those people and employers end up locating has huge implications for what life will be like in the four-county region.

Attempting to shape that growth is the job of the PSRC and its Vision 2050 plan, which updates the metropolitan planning agency’s road map for the next 30 years of growth in the Puget Sound region. PSRC brings together elected officials from city, town and county governments throughout the four-county region. Vision 2050 sets benchmarks for how the region should grow and where those millions of new residents and jobs should be distributed.

The plan addresses the region’s traffic, housing affordability, access to jobs, environmental health and more. It could also influence which communities benefit from the region’s growth and which suffer. That’s why, as PSRC moves toward finalizing Vision 2050, a group of transportation, environmental and community groups has formed to push the agency to do everything it can to center racial and social equity in its planning process.

Arguing that how the plan is written and implemented could either help or harm low-income communities and communities of color in the region, the coalition is lobbying PSRC to incorporate concrete equity goals in its plan.

“The regional coordination of housing, jobs, and travel is so important,” said Hester Serebrin, policy director of the Transportation Choices Coalition, which is leading the coalition of nonprofits. “We need a better balance of jobs and housing. But it needs to be the right kind of good paying jobs and include affordable housing. … How do we make sure low income folks and communities of color can take advantage of the benefits of transit-oriented development?”

PSRC is the only real forum for regional planning that brings together elected officials from every Puget Sound city and town. “The average person could kind of care less about political boundaries,” said Ryan Mello, Tacoma city councilmember and chair of PSRC’s Growth Management Policy Board. “They live in one community, work in another, play in another. … In order to grow in a healthy way and to sustain the economy, we’ve got to plan in a more regional way and not just city by city.”

The agency is now in year two of the four-year process of completing Vision 2050, the third update to its long-range growth plan — a requirement of the Growth Management Act, which Washington adopted in 1990. PSRC adopted its initial plan, Vision 2020, in 1995 and updated it with the Vision 2040 plan in 2008.

Early this month, the group released a draft impact statement analyzing how three approaches to growth would affect the region’s housing, transportation, economy, environment and other metrics.

The first option is to loosen existing urban growth boundaries to allow for more sprawling development in unincorporated areas throughout each county. The second is to continue growing the way we currently are, developing primarily in major cities and towns, with some unincorporated and rural development. The third choice is to encourage development around current and future mass transit hubs in cities and towns to limit sprawl as much as possible.

Ben Bakkenta, PSRC’s director of regional planning, said the PSRC board is leaning toward dense, transit-oriented development. In the years since Vision 2040 was adopted, voters in the region approved two major expansions of Sound Transit’s rail and bus operations that will invest more than $80 billion in transit by 2040. Kitsap County has invested in fast ferry service from Bremerton and Kingston. Community Transit in Snohomish is expanding its bus rapid-transit lines. Pierce Transit is also investing to expand operations.

Once PSRC finalizes Vision 2050, it’s on the local municipalities to amend their comprehensive plans in a way that will encourage the right type of growth. That might mean upzoning neighborhoods around a future light rail station to allow larger apartment buildings. Or it could be a change in zoning to restrict new development in rural farm and forestland in a municipality.

There is a limit to how much Vision 2050 can shape each city and county’s growth patterns. After all, said Mello, “This stuff is complicated because [PSRC] is not an authoritarian regime, for good reason. We use more of a carrot than a stick approach.”

Cities and towns need that funding to pay for things such as transit, roads, bridges and traffic signals. In order to be eligible for funding through PSRC, a municipality must get its comprehensive plan certified by the agency. Therefore, in order to get funding, their comprehensive plan must be written to further the goals of Vision 2050.

Advocates say PSRC should also leverage that funding to encourage cities and towns around the region to incorporate racial and socioeconomic equity goals into their comprehensive plans. And to get those goals into local comprehensive plans, PSRC needs to make them an explicit part of Vision 2050.

Without explicit racial and social equity goals in the plan, advocates say the coming regional growth will inevitably lead to low-income residents and people of color being displaced. South Seattle’s light rail stations illustrate what can happen when transit investments are made with little thought to mitigating gentrification and displacement.

“The transit-oriented planning with the most benefits [for transportation and the environment] has the most risk of displacement for low-income communities and communities of color,” said Transportation Choices Coalition's Serebrin.

Bakkenta said PSRC’s board members recognized the need for including more explicit equity goals in the Vision plan update. Vision 2040 makes a nod to equitable outcomes in its introduction, but it does not make explicit the links between gentrification and displacement or the ways growth. and economic development does not, on its own, benefit everyone equally.

In the initial outreach around Vision 2050, board members and the public identified social equity as a high priority for PSRC to address.

To that end, the agency is also hiring a full-time equity manager to lead internal and external racial and social equity work. PSRC also included a much more robust racial equity analysis in its Vision 2050 planning. They mapped the region to identify majority communities of color and low-income communities and looked at access within those communities to quality-of-life indicators, including education, economic health, housing, neighborhood quality, transportation, health and environment. That mapping is then used to create a displacement-risk analysis.

In a letter to the agency, the equity coalition called on PSRC to incorporate several additional measures into their Vision 2050 work. The first is to explicitly call out racial inequities in their planning. The letter explains, “Racial inequities across all indicators for success are deep and pervasive. Strategies that target these inequities often result in systemic improvements that benefit members of all racial groups, but the initial focus must be – explicitly – on those most impacted.”

Finally, the coalition is requesting that the PSRC cut down on the wonk to help open up the process to low-income communities and communities of color.

“The scope of work at PSRC is wonky and inaccessible,” said Giulia Pasciuto, policy analyst at Puget Sound Sage. “We’ve been trying to push the agency to think about [funding] community-based organizations to do the outreach necessary to get the input from communities.”

The coalition says it recognizes the limits of PSRC to make changes at the municipal level. But Serebrin said it’s better to make the plan than not. “If we had done the planning right 30 years ago, where would we be now on displacement? Where would be on other important issues,” such as low-income communities being located near highways and industrial zones and suffering negative health implications as a result?

Mello echoed the sentiment. “Our tools are limited,” he said. “We have to use our power of convening, our power of getting communities to plan together, and plan in a better way. We give them the resources to do that, the how-to guides, the best practices, the cut-and-paste policies for their comp plans. But convening is incredibly powerful. To have elected leaders from the region in the room for months on end, hashing it out on common goals — it doesn’t happen if we aren’t talking to each other.”

PSRC is accepting public comment on the draft impact statement until April 29. It will spend the rest of 2019 finalizing Vision 2050 and adopt the plan in 2020.